The Chiefs defense came out and smothered the Jacksonville Jaguars on Week 1, tallying 6 sacks, 2 INT's, 1 pick six, and countless negative plays. Kalo shows you how they did it.

Arrowhead Pride faithful, this week was fun for me.  Not only did the Chiefs defense line up and take it to an opponent, they dominated Jacksonville in every facet of the game.  The Jaguars struggled to run on 4 and 5 men in the box!  The pocket couldn't stand up the the attack of Dontari Poe, Justin Houston, and Tamba Hali!  The secondary flew around the field and made plays, both in the short and long passing game!  After all the speculation and discussion this offseason/preseason, the debut of Bob Sutton's all-out attacking defense made it's presence felt last Sunday.

After friend and former Arrowhead Pride writer BJ Kissel showed us in visual detail how the Offensive Line played, I asked around and found that people enjoyed the pictorial descriptions of the plays, and hey...I'm stealing BJ's idea.  Rather than read the giant wall of text I normally post, let's try this out with some more pictures.  So without further ado, this week's most interesting plays:

This first play comes to you courtesy of Bob Sutton's ability to confuse the hell out of an offensive line.  The Chiefs are in a 2-3 defense with Eric Berry playing in the box (above Justin Houston).  Quintin Demps is the only deep safety, as everyone else is either playing press man coverage or showing blitz. 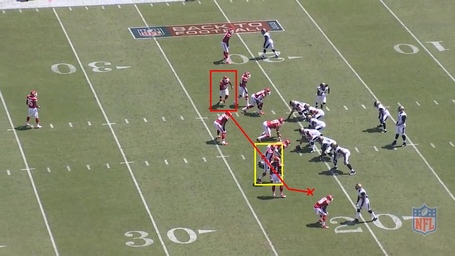 I've highlighted two players in this picture.  In yellow is Tamba Hali.  In red is Husain Abdullah.  Abdullah's job is obviously to stick with the slot receiver, so he follows his player across the field, rather than letting Kendrick Lewis (standing next to Tamba) pick up the receiver as he comes across. 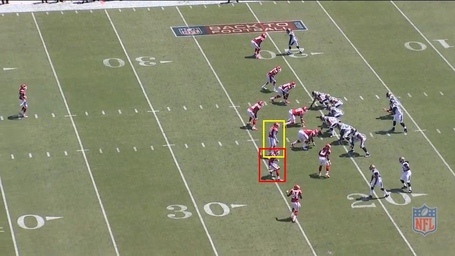 What you're now looking at is what the Jaguars offensive line is seeing pre-snap.  There are two down linemen (Catapano and Poe), 5 players standing in the box, single man coverage on the three receivers, and 1 deep safety.  I've once again highlighted Tamba to show you where he's standing when the ball is snapped.  He's pretty much hanging out in the other inside linebacker spot with Lewis spending some time at...outside linebacker?!?!  Is this a jailbreak blitz?  Who's going where? 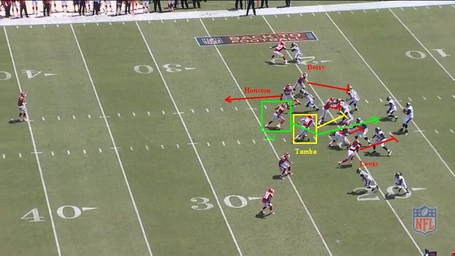 Justin Houston drops into coverage on the tight end, and Eric Berry blitzes from the right side of the offense.  Poe and Catapano each take their blocking guards towards the tackle, leaving space around the center.  Tamba blitzes right at the center, and DJ comes through the A gap behind them, getting a free shot at the quarterback.  Gabbert is rushed and has to throw it earlier than he'd like, and Dontari Poe sticks one of his big mitts in the way of the pass to knock it down.  Oh, and that IS Kendrick Lewis rushing 1-on-1 against the left tackle, Eugene Monroe.  Think about that for a second:  The Jaguars franchise left tackle and 2013 1st round pick right tackle were forced to block the Chiefs starting free safety and strong safety, respectively.  Bob Sutton dials up some cool blitzes, you guys.

This is a quick one courtesy of the "Kendrick Lewis can still play ball" club. 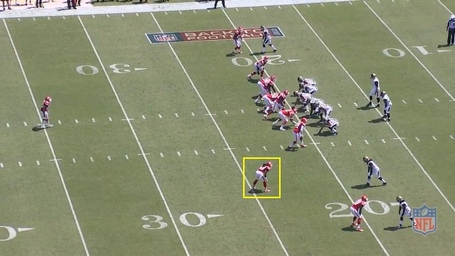 I've highlighted Kendrick in the picture, but notice how the line is stacked with Chiefs players there.  It's the base 3-4 (Jackson-Poe-Devito), but Akeem Jordan is showing an A gap blitz on the left side of the offense, and DJ shows a B gap blitz on the right side of the offense.  Gabbert feels the heat, but the play is a wide receiver screen, so he feels pretty confident.  Oh, and also...that's Eric Berry playing the deep safety there.  The guy is going to play all over the place in this defense. 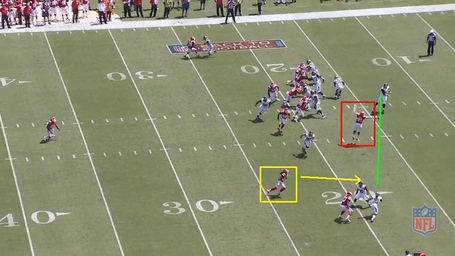 The ball is snapped and is immediately thrown out to the receiver.  You'll notice that Tamba's blocker is trying to get out wide to lay a hit on Lewis.  Tamba takes a fantastic angle up the field and forces the throw to be farther behind the line of scrimmage than the Jaguars wanted, and also causes the receiver to have to alter his route and it slows down the play.  The original receiver that Kendrick was covering has now blocked down on Sean Smith.  Lewis recognizes this and pushes hard up the field to meet the receiver. 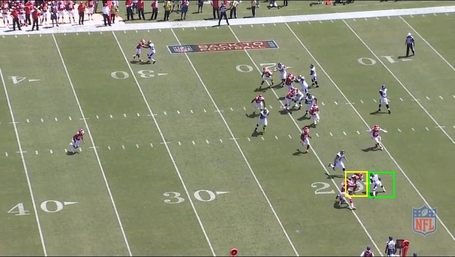 And there's the payoff.  Lewis is too quick for the tight end to block down on him, and because the receiver had to delay his progress due to the altered route, the screen is blown up for a 4 yard loss. 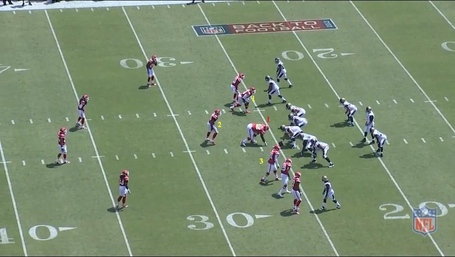 Yep, that's a 1-3 defense.  The Chiefs ran it several times, and it worked well.

Let's finish up with a running play, and one that shows us some of the principles of a 1-gap defense. 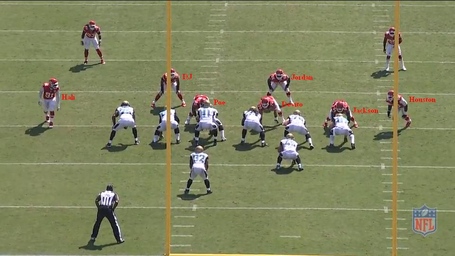 I tossed in this picture so you can see where the players are lined up and so everyone knows who's who in the upcoming series.  As you can see, Poe is still very much playing the nose tackle position, even though both Devito and Jackson are lined up to one side of him. 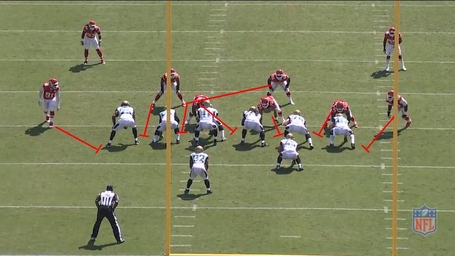 The red lines shown are the gaps that these players shoot during the play.  Some, if not all, of these are predetermined, as you will see in the upcoming pictures.  Of note, Poe's gap is the opposite A gap from where he's lined up. 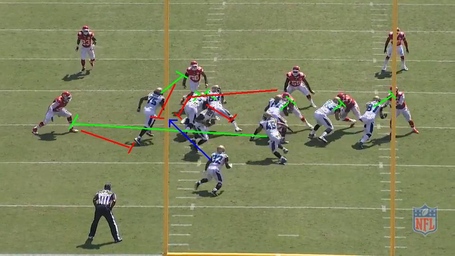 I've now added in some extras.  I kept the gap assignments for the Chiefs players who will impact this play the most, and I've added in the blocking assignments for the Jaguars.  You can see that the play is a designed run to the left end by the blue arrow I've drawn and the fact that the fullback's blocking assignment is Hali.  Poe is double teamed, but as noted above, his gap is the strongside A gap.  Left tackle Eugene Monroe is sizing up DJ for a big block.  From the offense's point of view, the running back should be able to hit the hole before the other inside linebacker (Jordan) gets there, and that leaves the free safety as the last man to beat. 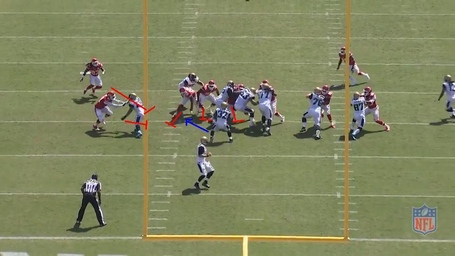 Well, as you can see, it didn't work out the way the offense wanted it to work out.  Poe uses that massive strength to drive both his blockers into that A gap, closing it off.  Jordan hits the hole QUICKLY and DJ avoids the block by the left tackle.  Lewis is pressing forward, and Tamba has set the edge.  There's nowhere to go but down for the running back, and Jordan ends up making the play to hold it to a 1 yard gain. 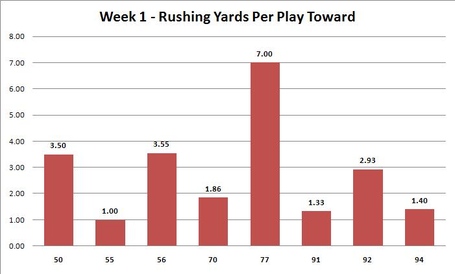 Oh yes, those are pretty stats.  Catapano sticks out the most on this list, but that's not surprising.  He was thrust into a starting sub package role and when the Jaguars ran on the sub defense, it wasn't at Poe.  Catapano only saw three rushes, but two of them totaled 19 yards.  Poe faced the most runs at him, seeing 14 plays in the 3-4, 1-3, and dime defenses.  Akeem Jordan led all against the run, holding the Jaguars to 6 total yards at him in six plays.  That's a quality performance out of the guy. 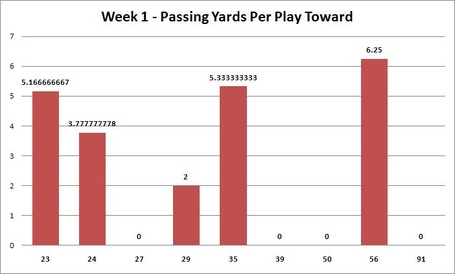 As pretty as the rushing stats were, the passing ones are even better.  DJ had the worst night of the bunch, allowing passes of 10 and 15 yards through 4 attempts, but that's still pretty darn good.  Flowers was targeted the most out of the bunch, seeing 9 passes go his way.  Only three of them were completions.  Sean Smith led all players with 4 balls thrown his way.  None were caught.

Tamba Hali led all players with 5 quarterback pressures.  DJ followed up with two, and Berry, Jackson, Poe, and Catapano each logged one.

Quintin Demps had two pass break ups to lead the team.  Poe, Flowers, and Smith each had one swat down.

That was nothing like this fanbase has seen in awhile.  It was even more exciting than I expected, and I was expecting some pretty exciting stuff!  All the little complaints that I have registered over the preseason seemed to be gone.  The running backs were covered in the flats.  Tamba wasn't leaving huge running lanes behind him.  The team even kept the quarterback in the pocket for most of the game!  Everything seemed to be improved and clicking.  The right blitzes were called at the right times, and players executed properly.  On top of everything, the defensive player with the most expectations on him in his sophomore year came right out of the gate and set the tone for the defense.  He had three run stops and a swatted pass in the first quarter alone, and the Jaguars were very focused on him.

I'll leave you with this final piece of information:  A lot was made out of the first half's total yardage statistic, and for good reason.  It was very impressive.  However, what's being far too overlooked here is the fact that the Kansas City Chiefs allowed 9 total yards in the entire 3rd quarter. I don't care who you're playing, or at what level they are executing...that is damn impressive.  This defense came out like a bunch of guys hungry to prove to the NFL that last year was a fluke.  Through one week of action, they have.