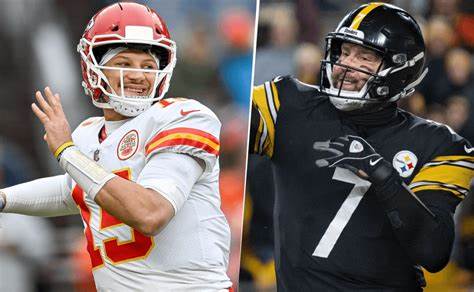 Last night, we just witnessed the Chiefs defeat the Steelers 42-21 in a 21 point blowout win in what was Big Ben's last career game in the 2022 AFC Wild Card. This happened 5 years after the Steelers' Chris Boswell kicked 6 field goals at Arrowhead to beat Kansas City 18-16 in the 2017 AFC Divisional Round. 5 years ago, I remember watching that entire playoff loss to the Steelers from start to finish, I remember blaming the officials the very next day in an Arrowhead Pride fanpost, but I could have never imagined the two trajectories that these two franchises would take in the next 5 years.

Looking back on that holding call on Eric Fisher back in 2017, It was technically the right call but it decide the outcome of the game; as Alex Smith had to try again for a two-point conversion from a further distance and he couldn't convert. The Steelers were given the ball back and they got a first down to seal the game.

The Fall of the Steel Curtain

After winning that playoff game against the Chiefs in 2017, the Steelers would then go on to be squashed by New England on the road in the 2017 AFC Championship.

The next season (2017-18); the Steelers finished with a solid 13-3 record in the regular season and a #2 seed, but they got snakebitten by the Jacksonville Jaguars in the 2018 AFC Divisional Round, as the Jaguars poured on 42 points at Heinz Field.

After that, the next 2 seasons (2018-19 and 2019-20), the Steelers failed to even make the postseason, and the 2018-19 season for Pittsburgh was a memorable collapse; thanks to UrinatingTree's Days of our Steelers web series. The Steelers started off that year 7-2-1, before finishing off the year, 2-4 and missing the playoffs.

The Steelers in 2020-21 would start off with a surprising 11-0 run and genuine talks of the Steelers being Super Bowl LV favorites, This 11-game winning streak would prove to be made out of paper meche as the Steelers finished the regular season 1-4 and would get embarrassed in the 2021 AFC Wild Card at home against their divisional rivals in the Cleveland Browns.

And then their was this season for the Steelers, 2021-22 was quite the year for Pittsburgh as they finished the season 9-7-1 and made the playoffs thanks to the Colts losing and the Chargers/Raiders not tying in the Week 18 regular season finale. Big Ben's career would come to an end in the playoffs at the home of what ended up being his last career playoff win a half-decade prior against Kansas City.

After losing to the Steelers 16-18 at Arrowhead in the 2017 AFC Divisional Round; the Chiefs would go on to make one of the most legendary draft pick trades of all time by trading their first round pick and 2018's 1st rounder to the Bills for the 10th overall pick to select Patrick Mahomes II (QB, Texas Tech). Many, Chiefs fans didn't know it at the time but this move would drastically alter the trajectory and fortunes for the Chiefs in a near instant.

Although, Kansas City would stick with Alex Smith at starting QB in the 2017-18 season, the Chiefs would go 10-6; win the AFC West and then go one and done in the playoffs (the last time this has happened in recent memory) and fall to the Titans at home in the 2018 AFC Wild Card.

If you told me all the way back in 2017 after losing to the Steelers at home in that playoff game, and when we drafted Mahomes; 3 months later. That Patrick Mahomes would be the reason why this franchise would go on to appear in 3 straight AFC Championship games at Arrowhead, 2 straight Super Bowl appearances, and a Lombardi in his 2nd season as a starter and a playoff win over the Steelers at home, I wouldn't have believed you.