A week from Thursday, the Kansas City Chiefs and Houston Texans kick off the 2020 NFL season. To mark the first time in 50 years the Chiefs will start the season calling themselves "Defending Super Bowl Champions," how about some 2019 Chiefs facts to get you all fired up?

With last season's Week 10 loss to the Tennessee Titans, the Chiefs fell to 6-4, putting Kansas City in the fourth playoff seed -- with the Oakland Raiders (5-4) breathing down their necks for the AFC West lead. But then the Chiefs ripped off a six-game winning streak to close out the season as AFC West champions, earning the second seed and a first-round bye in the playoffs.

As you know, the Chiefs won three more games in the 2019 postseason. With two wins to begin the season, the Chiefs will match the longest winning streak in franchise history (2015); a Monday night win over the Baltimore Ravens in Week 3 would set a new franchise mark. (If you're curious, the Chiefs would need to start the season 13-0 to set the record for the NFL's longest winning streak at 22; the 2003-2004 New England Patriots currently hold the record of 21).

Over their six-game winning streak to close out the regular season, the Chiefs beat their opponents by a score of 167 to 69. The Chiefs defense was amazing during this period, allowing just 11.5 points a game, racking up 15 sacks and 10 interceptions -- while making life miserable for six quarterbacks who averaged a passer rating of just 63.5. Beginning with the fourth quarter of their Week 14 game against the Patriots, the Chiefs didn't allow a touchdown for 10 straight quarters. 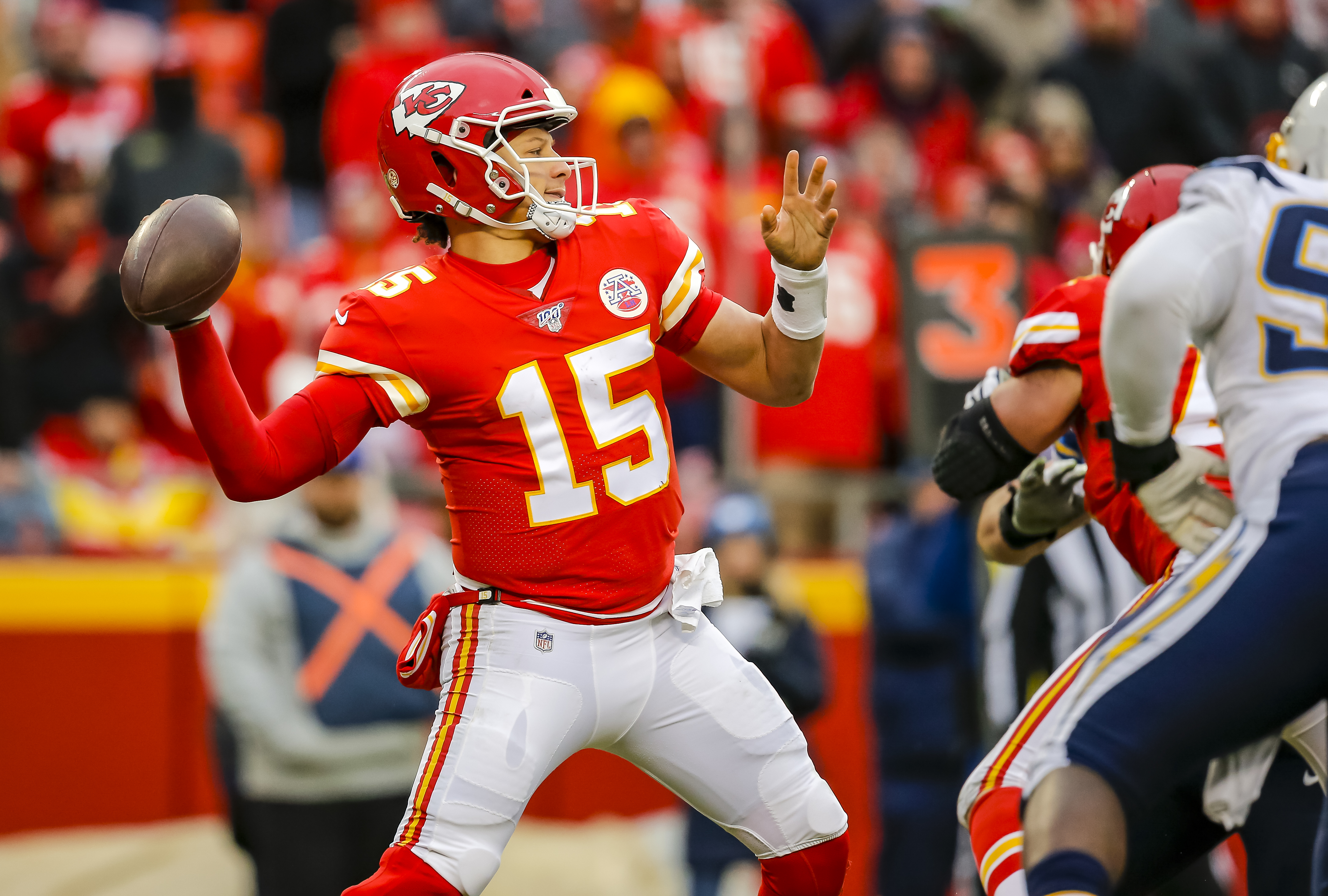 Despite missing two full games and most of a third, Chiefs quarterback Patrick Mahomes' 4,031 passing yards was still seventh-highest in team history -- and his 26 passing touchdowns were eighth-best for the franchise. In just two years as the starter, Mahomes' 76 regular-season passing touchdowns are already fifth-most in team history. With 30 more in 2020, he'll have the third-most. With 3,000 passing yards in 2020, he'll move into fifth-most -- leaving Matt Cassel and Elvis Grbac in his dust.

In 2019, tight end Travis Kelce became the first tight end in league history to have four straight seasons with at least 1,000 receiving yards. Even though he only played 12 games, Tyreek Hill led all Kansas City wide receivers in both receiving yards and touchdowns -- just as he has every year since he entered the league in 2016.

Last season, the Chiefs posted a double-digit regular-season win total for the fifth-straight year -- the only time the franchise has ever done it -- winning their fourth-straight AFC West title. Before 2017, the Chiefs had never even won back-to-back division titles. If the Chiefs win it again in 2020, they will tie the 1972-1976 Raiders and 2011-2015 Denver Broncos for most consecutive AFC West titles.

Since coming to Kansas City, Andy Reid has pummeled division opponents, notching a 32-10 record. Since 2015, that record is a gaudy 27-3. He hasn't lost more than a single AFC West game during any of those five seasons, Last season was the second time Reid's Chiefs were undefeated in division play.

The 2019 Chiefs made it to the playoffs for the fifth straight season. That is one shy of the franchise record of six straight (1990-1995). They had a first-found bye for the second consecutive year -- the first time the franchise had ever accomplished that feat.

And for the second-straight year, the Chiefs benefited from a miraculous Miami Dolphins victory over the Patriots that came at the exact same time the Chiefs were winning crucial games that directly determined playoff seeding. In 2018, the Dolphins' crazy desperation chain of laterals beat the Patriots just as Patrick Mahomes was hitting Tyreek Hill with a fourth-and-9 bomb against the Baltimore Ravens, giving Kansas City the inside track to the first seed. In 2019, Ryan Fitzpatrick threw a touchdown strike to tight end Mike Gesicki to drop the Patriots -- just as the Chiefs were putting away from the Los Angeles Chargers, which moved the Chiefs into the second seed.

We all know that in 2019, the Chiefs were the first team to win all three of their playoff games after trailing by 10 or more points. But did you know that the they were also one of only 20 teams to win all their playoff games by 10 or more points en route to a Super Bowl championship? And that they were the first team to do it since the 2002 Tampa Bay Buccaneers? Of the 20 teams to accomplish the feat, 13 of them did so during the worst period of Super Bowl history; the 17 championships played between 1982 and 1998 were consistently no-contests or outright laughers.

but as the talent became more equally dispersed in the late 1990s and early 2000s, parity reigned and competition improved. So it's really quite telling that the 2019 Chiefs were just one of three teams to pull it off feat off in the 21st century -- and the only team to do it in past decade.

I understand and appreciate Williams' decision to opt out of 2020. But if he had stayed in -- and keep up that pace through three 2020 playoff games -- he would vault all the way up to the third-best all-time mark for postseason touchdowns, trailing only Thurman Thomas and Emmitt Smith (each with 21) and Jerry Rice with 22. 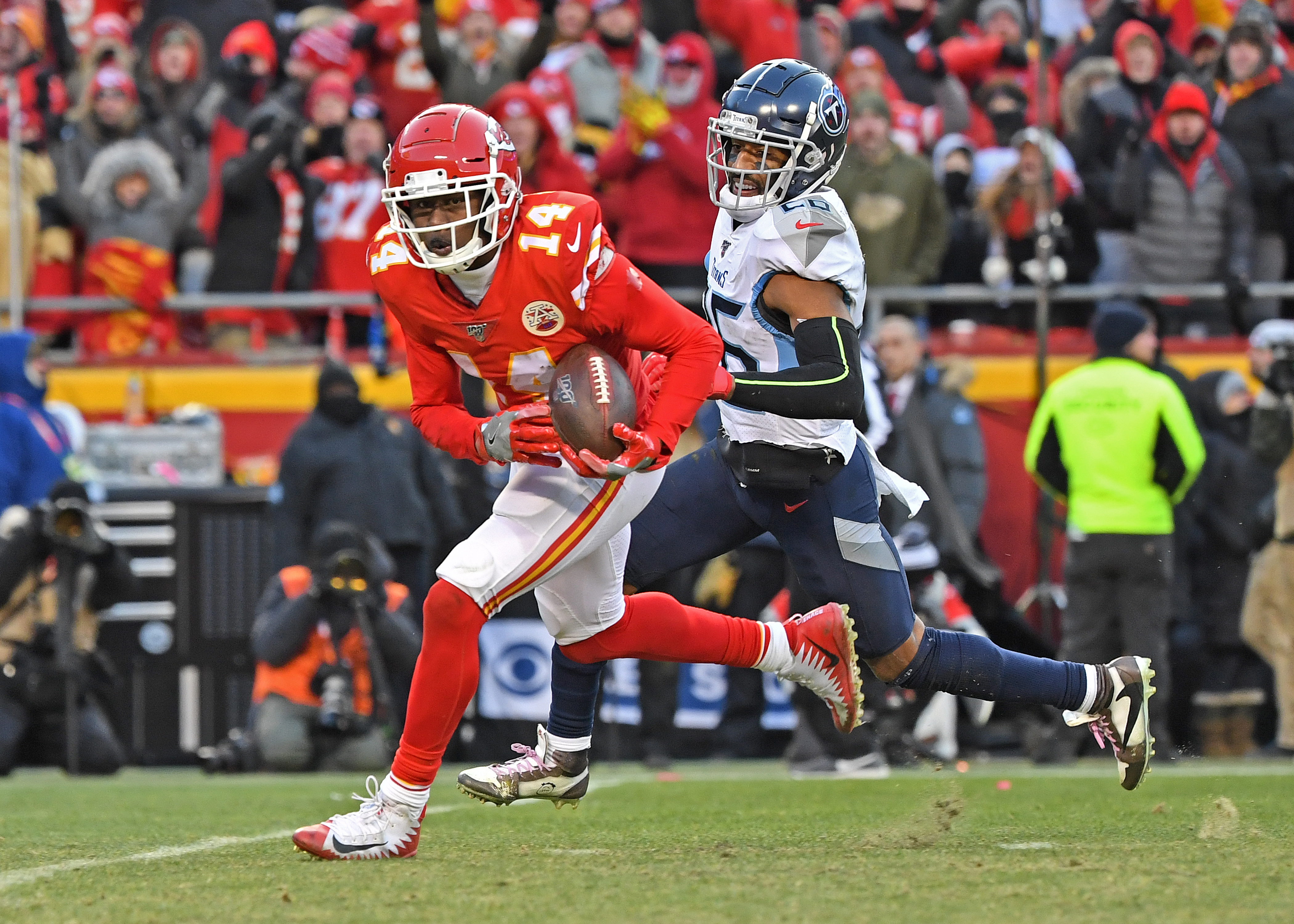 Sammy Watkins' 288 postseason receiving yards were the most in a single Chiefs playoff run, breaking the previous record of 217 set by Otis Taylor in 1969. Watkins posted 76 yards against the Texans, 114 yards (and a game-sealing touchdown) against the Titans and capped it off with 98 yards in the Super Bowl. Meanwhile, tight end Travis Kelce broke the franchise record for most career playoff receiving yards with 632 yards, breaking Otis Taylor's previous mark of 469.

Mahomes' 10 postseason touchdowns passes is tied with Tom Brady (2014) for second-most in a single playoff run. In his brief playoff career (five games), Mahomes has thrown for 1,474 yards and 13 touchdowns -- while adding 154 yards and three more touchdowns on the ground. During the postseason, he's averaging 326 yards of total offense and four total touchdowns in each game.

For a comparison, consider Lamar Jackson's 2019 MVP season, in which he averaged just 271 yards of total offense and three total touchdowns per game.

Frank Clark's five sacks during the postseason also set a Kansas City franchise record for a single postseason. And it should be noted that three of those sacks essentially ended all three games, with fourth-down sacks of Deshaun Watson, Ryan Tannehill and Jimmy Garoppolo that dashed the hopes of all three opponents. Just one season removed from Chiefs fans begging Bob Sutton's defense for just one stinking stop against the Patriots in the AFC Championship, Steve Spagnuolo's defense ended its three playoff games with two sacks and an interception.

Despite finishing the regular season 26th against the run, the Chiefs defense held the Texans to just 94 rushing yards in the Divisional round -- after Houston had racked up 192 in Week 6. The following week, the defense held Tennessee's Derrick Henry to just 69 rushing yards after he'd averaged 180 over the Patriots and Ravens in the first two weeks of the postseason. In the Super Bowl, the defense capped it off by holding the San Francisco 49ers to 141 rushing yards -- after San Francisco had averaged 235 yards in their previous two playoff games.

After the 49ers' Tarvarius Moore picked off Patrick Mahomes with 12:05 remaining in the fourth quarter, San Francisco had four drives. On those drives, the 49ers ran just 22 plays that gained only 47 yards, ending with two punts, a sack and an interception. But on the Chiefs' final three drives, the team gained 200 yards on 20 plays, scoring three touchdowns. 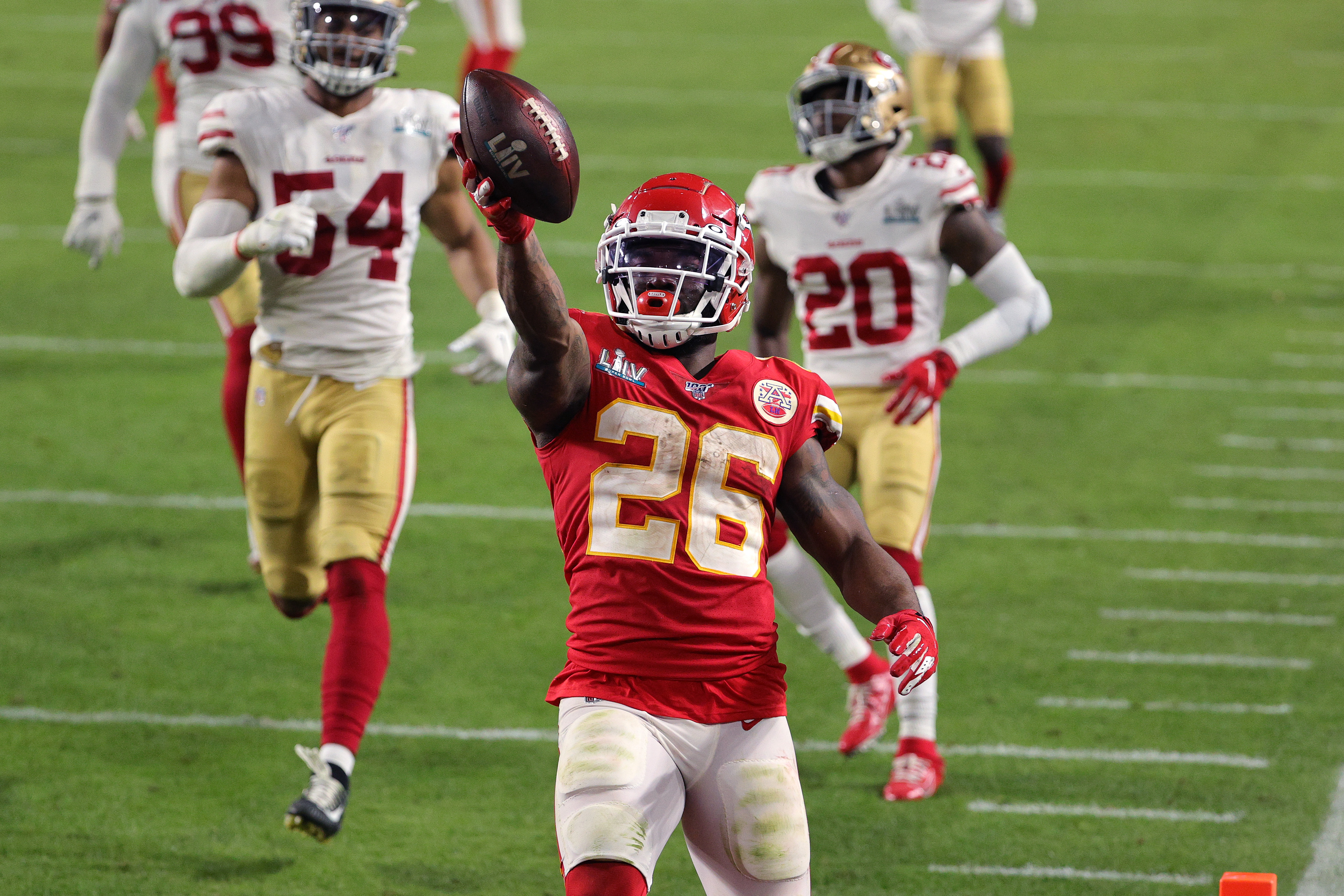 Damien Williams was great in the Super Bowl, becoming the first running back in Super Bowl history to rush for over 100 yards and score both a rushing and receiving touchdown. Some thought that Williams -- not Mahomes -- deserved to be Super Bowl MVP.

While Williams' touchdown run to seal the game will be unforgettable image for a generation of Chiefs fans, that one 38-yard play is what put him over 100 yards; without it, his stat line looks a lot less spectacular. And the run came at a time when the 49ers' will had already been broken.

But looking at Mahomes' performance -- ignoring the 15 lost yards on three-straight kneeldowns to end the game -- he had 286 yards through the air and two passing touchdowns, while rushing for 44 yards and a touchdown. That's 330 yards of total offense and all but one of the Chiefs' four touchdowns.

With the game on the line, his heroics were spectacular. On the third-and-15 shot to Tyreek Hill, not only did Mahomes call his shot, he hung in there and let the play unfold before getting creamed by DeForest Buckner. That play saved the game. After throwing his second interception, Mahomes was sitting at just 172 yards (and no touchdowns) passing. When the Chiefs got the ball back. Mahomes threw for 114 yards and a pair of touchdowns in just six minutes of game time. On the drive where the Chiefs went ahead for good, Mahomes was five-for-five for 60 yards and a touchdown.

Stay safe and healthy. Here's to a great season!