Welcome to this weeks' Stacking the Box Score, where I'll be quantifying what went down between the Kansas City Chiefs and their most recent opponent.

As always, here's a quick primer on some of the stats I'll be using this week:

More precisely, if a team is first-and-one at the opposing team’s goal line, the model will predict an expected points value near seven; it’s very likely that the team will score a touchdown. So if a player in that situation then runs the ball in for a touchdown, the expected points added (EPA) won’t be very large.

This metric quantifies how far a quarterback’s average pass is thrown down the field. It is measured vertically (straight north/south) from the line of scrimmage to where the receiver catches (or doesn’t catch) the ball. This metric is a useful way to quantify and compare the gunslingers against the check-down artists.

As always, let's start with the win probability chart so we can see which plays had the biggest impact on the game. 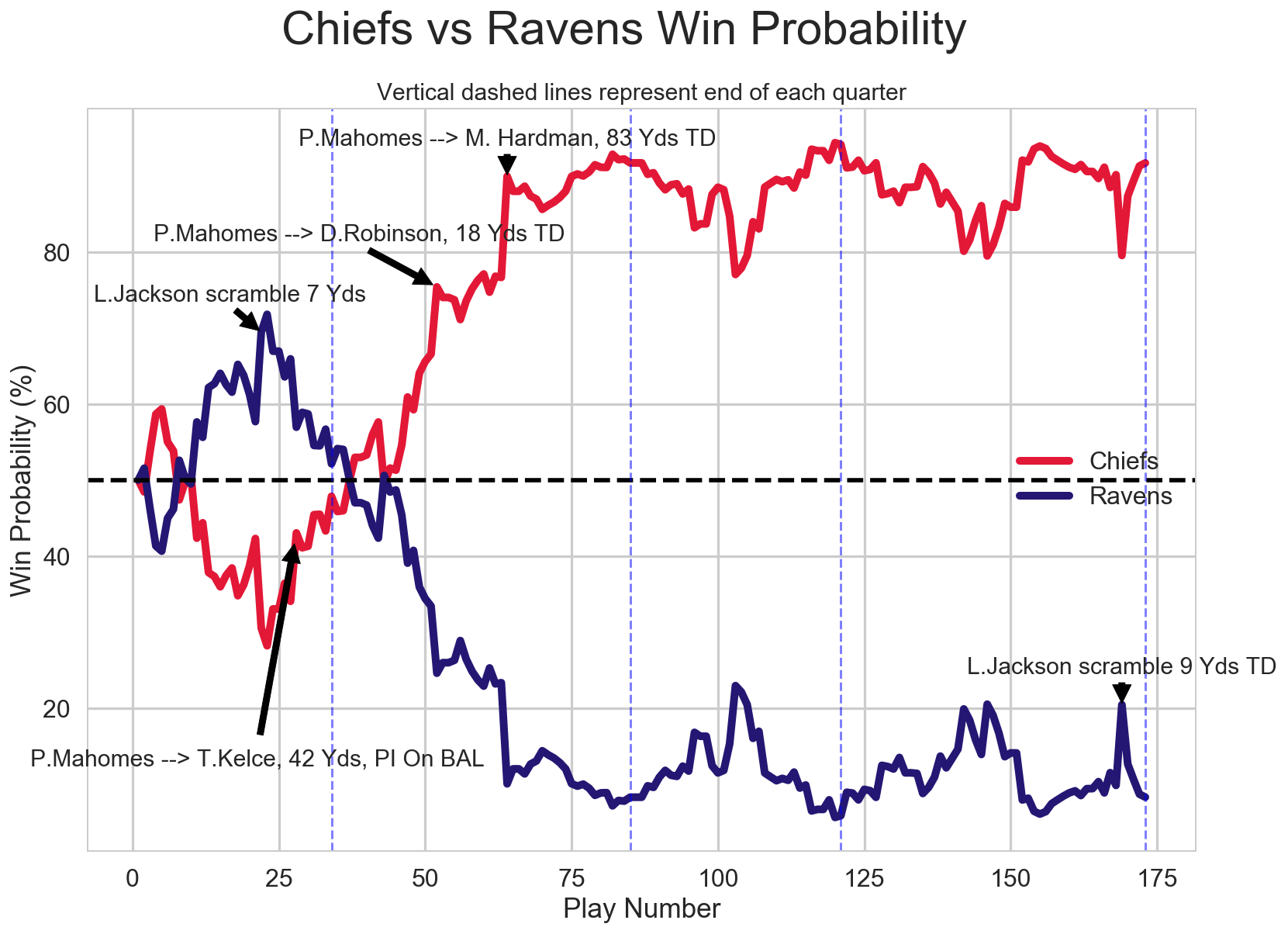 Just like last week against the Raiders, Patrick Mahomes took over in the second quarter -- and there was no looking back.

While the final score ended up being pretty close, the game was never really in doubt past halftime; it would have taken a string of miracles (including a recovered onside kick) for the Ravens to take the lead.

I'd like to highlight the first big impact play on the Chiefs' side: the pass interference call in the first quarter, which allowed the Chiefs to move 42 yards down the field.

It may seem weird for a penalty to have such a big impact on a game. But in the offseason, the NFL conducted a study which concluded that some of the plays with the biggest impact in any game are pass interference calls. That's why those penalties are now reviewable -- so if a team ends up having a game decided on the basis of a big penalty, now there will at least be some assurance that it was the correct call.

Now let's take a look at how Mahomes' Week 3 performance compared to the rest of the season -- and the rest of his career thus far. 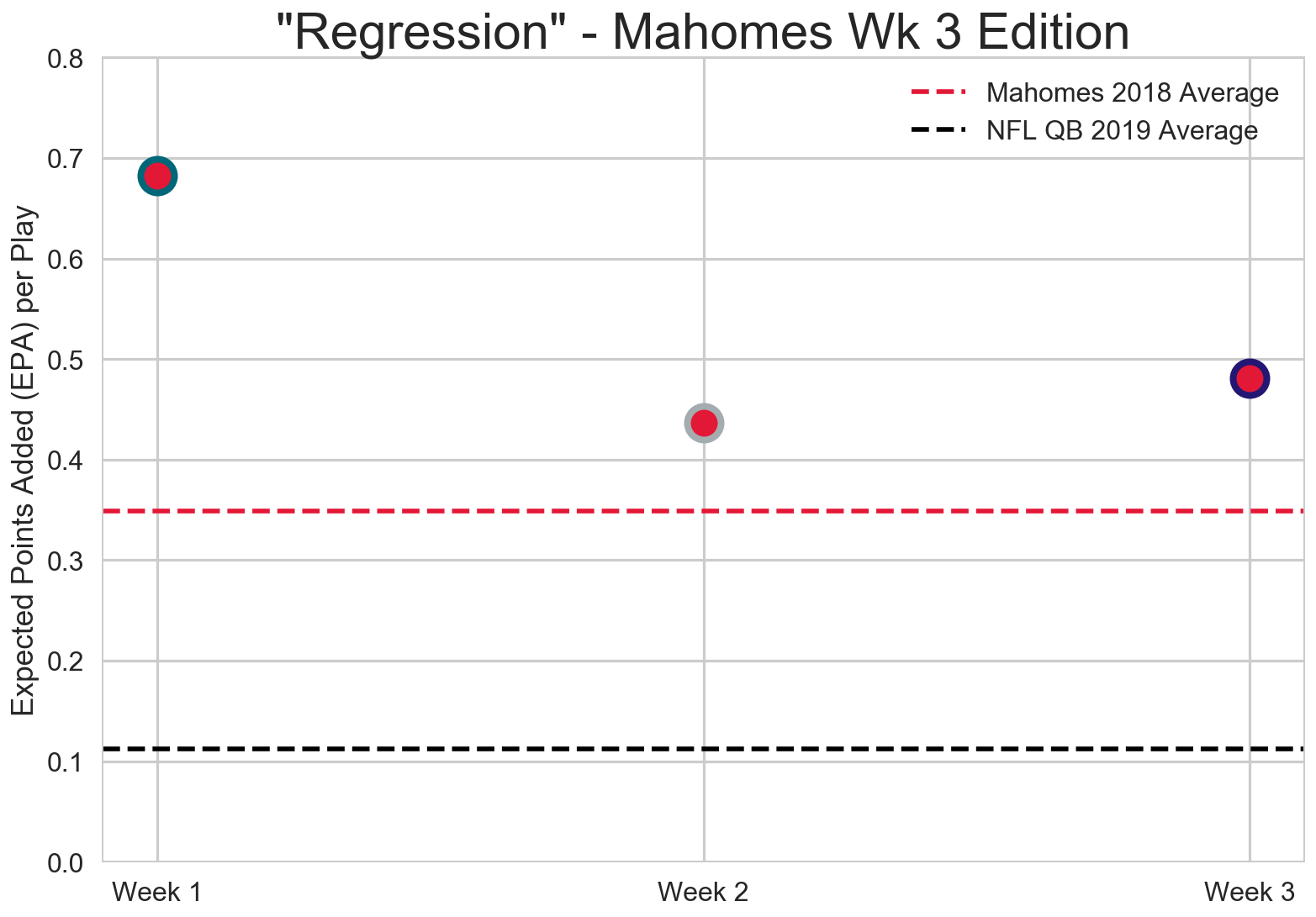 Despite all that talk about regression, Mahomes has somehow yet to dip below his the lowly 0.35 EPA per play he had in 2018. Oh wait... that 2018 EPA per play led the entire league last year! And in 2019,Mahomes has managed to beat it. Every. Single. Week.

How much of that performance was helped by yards gained after the catch -- and which receivers shined? 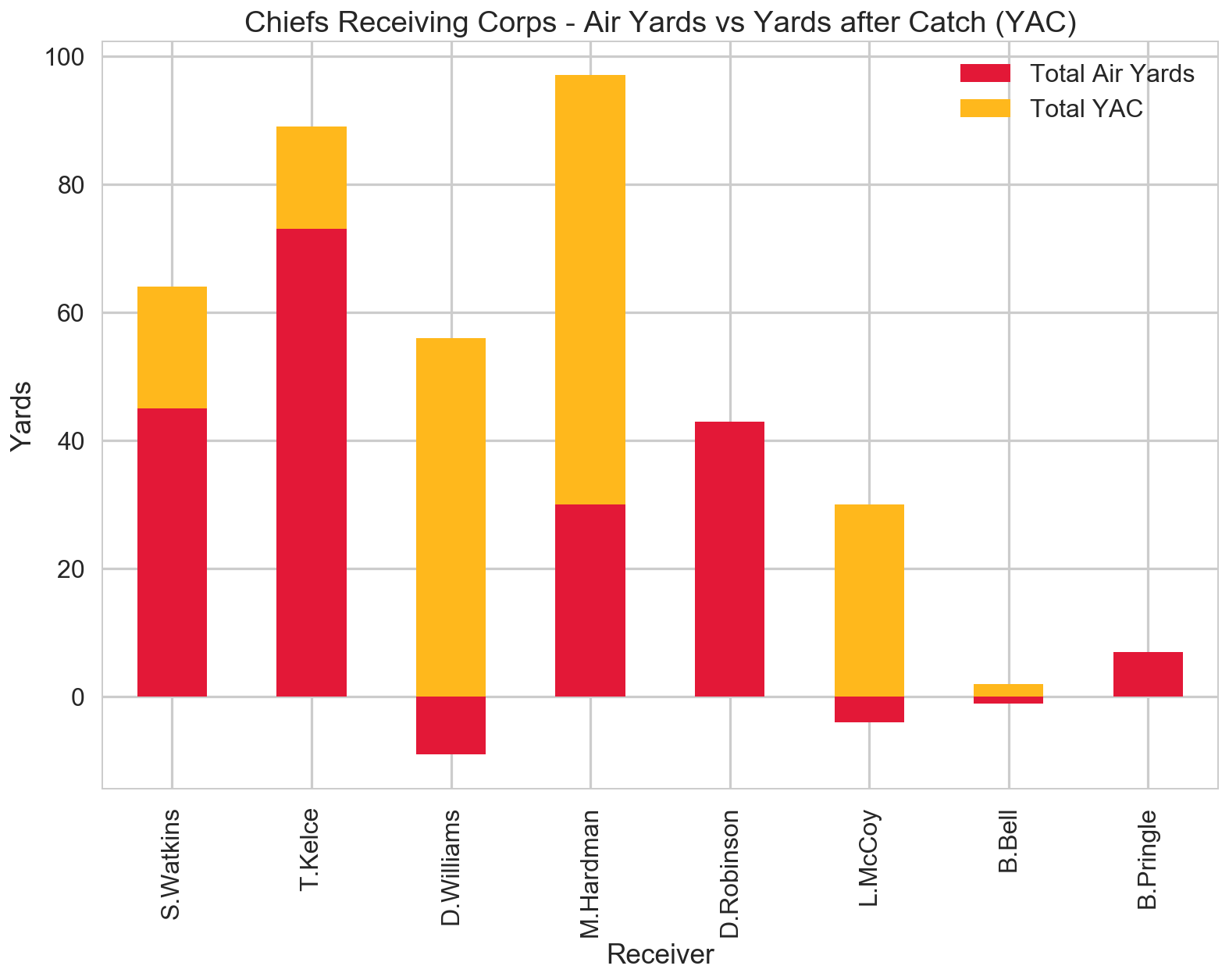 Darrel Williams, LeSean McCoy and Mecole Hardman certainly made the most of their targets, gaining a majority of their yards after the catch.These receivers are ordered left-to-right by number of targets -- so for the third straight week, Sammy Watkins led the team in targets.

Overall, this was a very well-balanced, even passing attack that proves Mahomes doesn't need any single star receiver to do well -- or maybe that all Chiefs' wide receivers are stars!

Now... those are some pretty impressive yards after catch for the Chiefs' running backs. Over this offseason, the analytics community discovered that targeting running backs in the passing game is actually inefficient; they don't often generate positive expected points added.

That is... unless your name is Andy Reid.

Here's a chart I put out on Twitter a few weeks ago that compared the efficiency of passes to running backs for all 32 NFL teams. 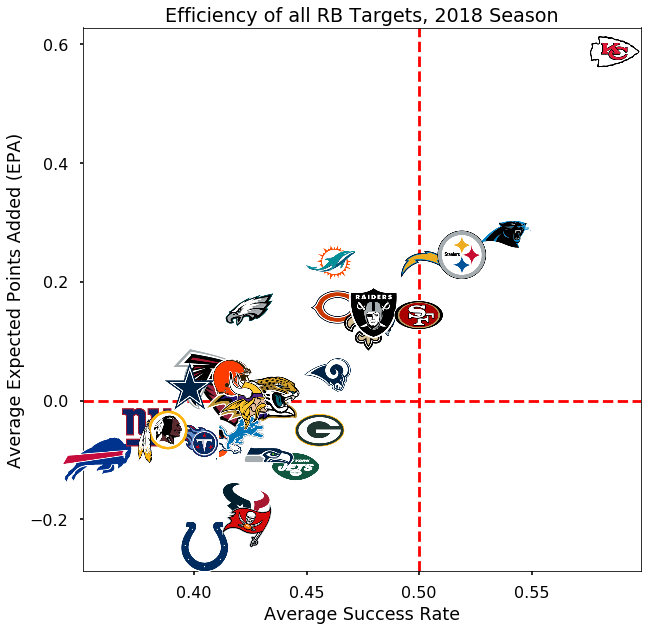 As you can see, the Chiefs were way above the rest of the league last season -- one of only four teams that were successful more than 50% of the time when passing to running backs. How does 2019 compare so far? 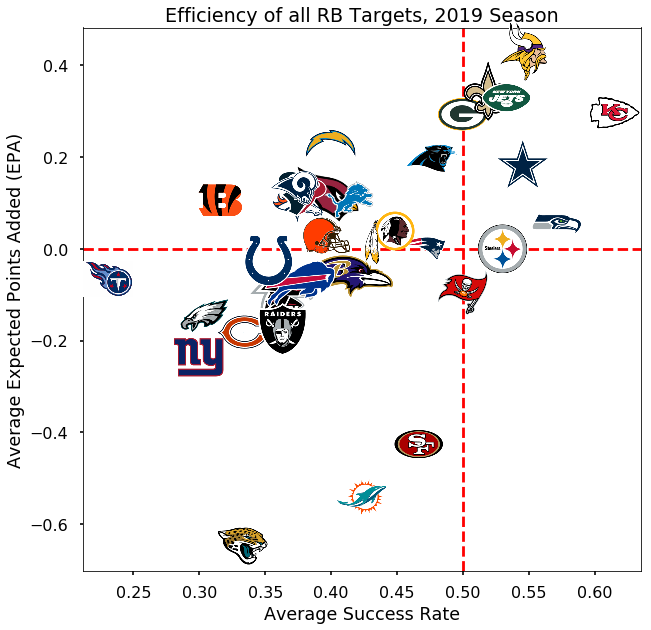 The Chiefs still lead the league in running back passing success rate (the percentage of passes to running backs that are a positive play), but there are now eight teams with success rates over 50% -- and a few teams actually generate a higher EPA per play than the Chiefs.

It looks like the copycat league that is the NFL has finally caught on, and is closing the gap a bit with Reid. Or maybe it's just a small sample size, and the gap will widen after a few more weeks. I'll keep tabs on this just in case.

How'd the running backs do in the run game?

Once again, LeSean McCoy was the more efficient runner -- but overall, the Chiefs' rushing attack was far more efficient than it was against the Raiders. Darrel Williams did well filling in for Damien Williams -- even if he was less efficient than the older McCoy. This is encouraging, as with heavy leads, the Chiefs will likely look to run the ball fairly frequently to close out games.

How often did the Chiefs' pass?

When analyzing a teams' play-calling tendencies, it is important to separate early-down, neutral game-script plays from the rest of the game. Why? Well, any team that is winning by a large margin is going to run the clock out, and any team that is way behind is going to pass. Further, third and fourth-down play calling is largely dictated by the yards needed to gain the first down.

So instead of looking at run versus pass percentages over the course of the whole game, we only look at first and second down when the Chiefs' win probability was between 20% and 80%.

In these situations against Baltimore, the Chiefs passed the ball 62.2% of the time -- essentially exactly the same as against Oakland.

Now lets look at the the defense.

The Ravens absolutely gashed the Chiefs on the ground. The defense gave up a whopping 0.38 expected points per play. This was ranked dead last in the NFL for Week 3 -- and it wasn't even close. The fifth-worst team (the Arizona Cardinals) gave up just 0.07 expected points per play. That said, many of those runs were against a Chiefs defense just looking to preserve the lead -- and at the end of the day, it's passing that wins in today's NFL.

And for the second straight week, the Chiefs defense limited the opponent's passing game to negative expected points added per play. This was the 10th-best performance of the week -- which when combined with the Chiefs' number one offense -- is more than enough to win games against great teams. Overall, there's lots to be excited about with the new and improved Chiefs Defense.

That's all for Week 3 of Stacking the Box Score. Hope you enjoyed it!