Welcome to this weeks' Stacking the Box Score, where I'll be quantifying what went down between the Kansas City Chiefs and their most recent opponent (read: victim).

As always, here's a quick primer on some of the stats I'll be using this week:

More precisely, if a team is first-and-one at the opposing team’s goal line, the model will predict an expected points value near seven; it’s very likely that the team will score a touchdown. So if a player in that situation then runs the ball in for a touchdown, the expected points added (EPA) won’t be very large.

This metric quantifies how far a quarterback’s average pass is thrown down the field. It is measured vertically (straight north/south) from the line of scrimmage to where the receiver catches (or doesn’t catch) the ball. This metric is a useful way to quantify and compare the gunslingers against the check-down artists.

Like last week, let's begin by looking at the win probability chart from the game, highlighting the five plays that had the biggest shift in win probability. 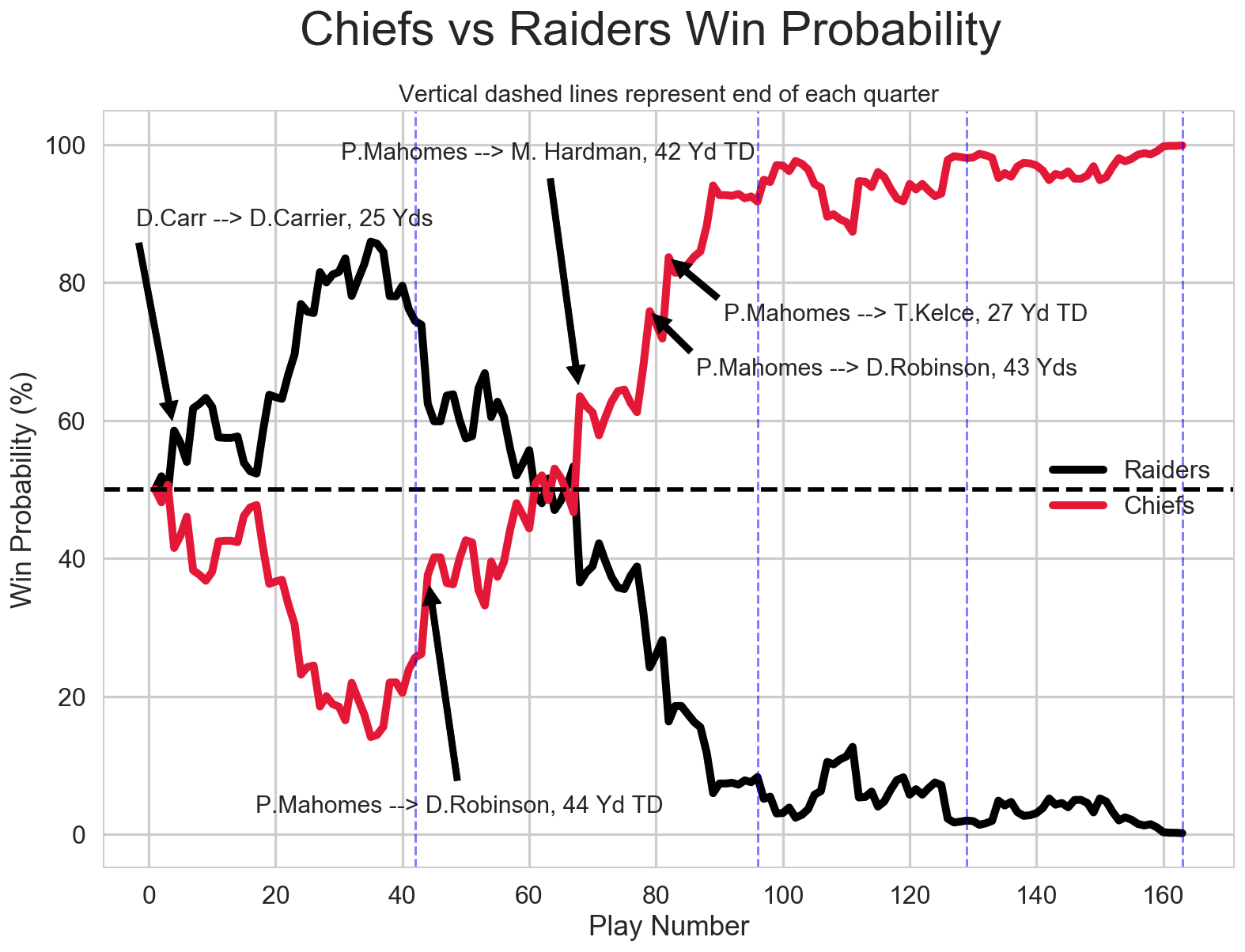 That's a lot of win probability gained in one quarter. In fact, Chiefs' chances went from around 25% to greater than 90% in the second quarter alone.

What drove this dramatic comeback? Well, anyone who watched the game could tell you: it was Patrick Mahomes.

Let's break down just how historic this game was for Mahomes -- specifically by looking at the performances by a quarterback in a single quarter since 2009. 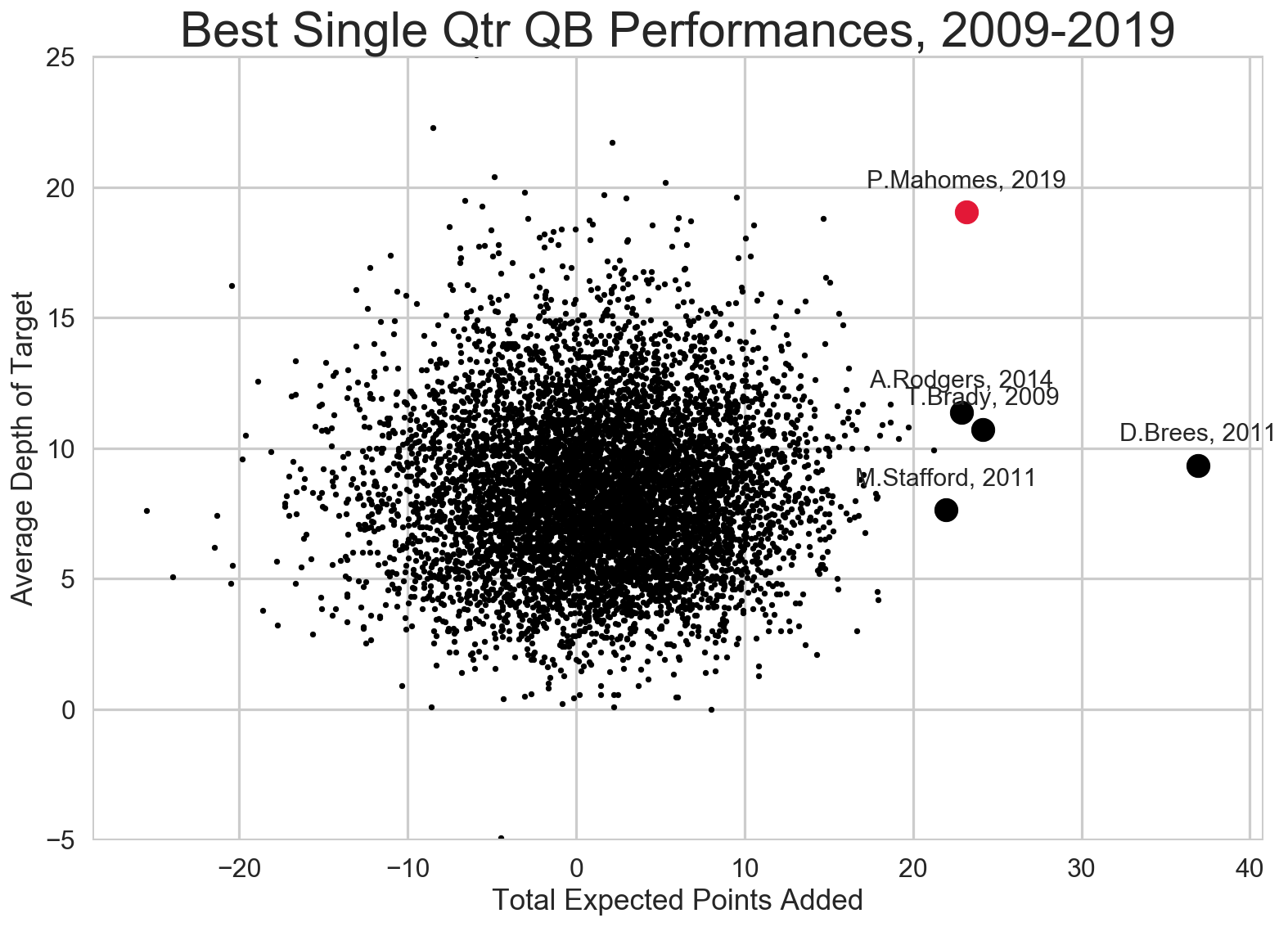 Here we have a plot of average depth of target against total expected points added for every quarter of play since 2009 -- which is 7,525 quarters of football!

Of those, only two quarterbacks added more expected points for their team than Mahomes did during Sunday's second quarter: Drew Brees in his 62-7 romp over the Indianapolis Colts in 2011 -- in which he had an insane 36 expected points added in the first quarter -- and Tom Brady's second quarter against the Buffalo Bills in 2009. In that game, the New England Patriots went on to win 59-0.

Of the top 20 performances by EPA in a quarter, Mahomes has the highest average depth of target -- meaning he wasn't just relying on broken coverage and yards after the catch. Instead, he was slinging it deep with efficiency and precision.

Let's look at that yards-after-catch number further, breaking it down by receiver like we did in Week 1. 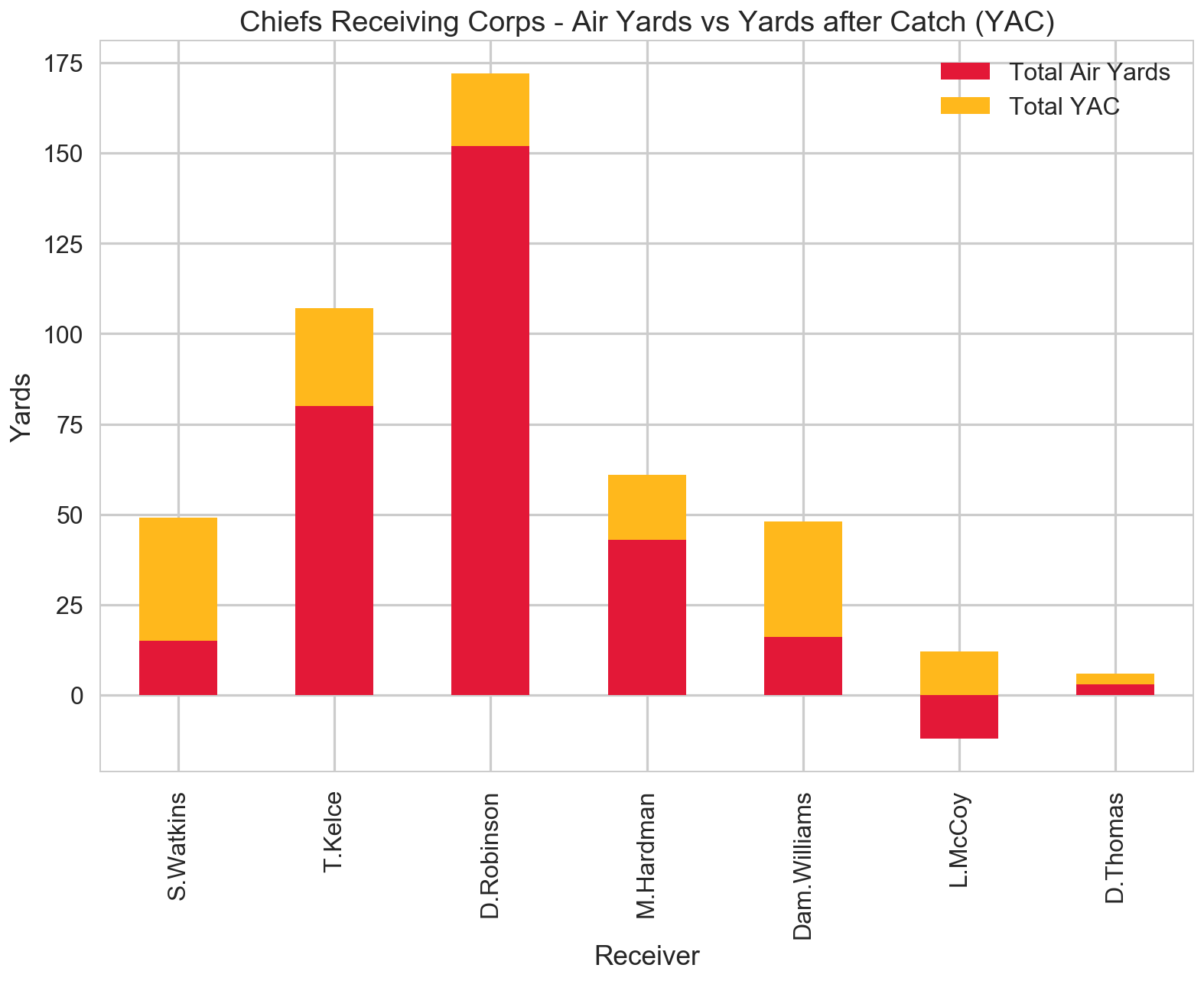 Receivers are ordered left-to-right by # of targets.

Our suspicions were correct.

This week, the vast majority of Mahomes' yards came through the air instead of after the catch. That's a good thing. Yards after the catch are far less predictive of future quarterback success than air yards, so it's good to see Mahomes can replicate his amazing Week 1 efficiency without relying on Sammy Watkins juking guys out of their cleats.

Demarcus Robinson was especially effective -- despite a very low yards-after-catch number. After all, it's hard to get yards after the catch when you're catching the ball in the end zone!

Watkins was surprisingly inefficient given his team-high 13 targets, but it's likely the Raiders keyed on stopping him -- which let Robinson feast.

Before we move on from Mahomes, I wanted to look at one more trend I've noticed.

Since Mahomes took the reins of the Chiefs offense, there have been a few games where things just didn't click early; passes were off-target and the defense gave up big plays. Before you knew it, the Chiefs were out of the game -- that is, until three or four plays later, when Mahomes would go on a rampage, somehow delivering perfect deep throw after perfect deep throw to bring the Chiefs back single-handedly.

I don't remember seeing any other quarterback that truly just turns it on every single time his team is trailing big. So like we nerds do, I wanted to quantify that. I looked at all quarterback performances when their team had less than a one-in-three chance to win the game, and averaged their average depth of target and EPA.

Here's what I found: 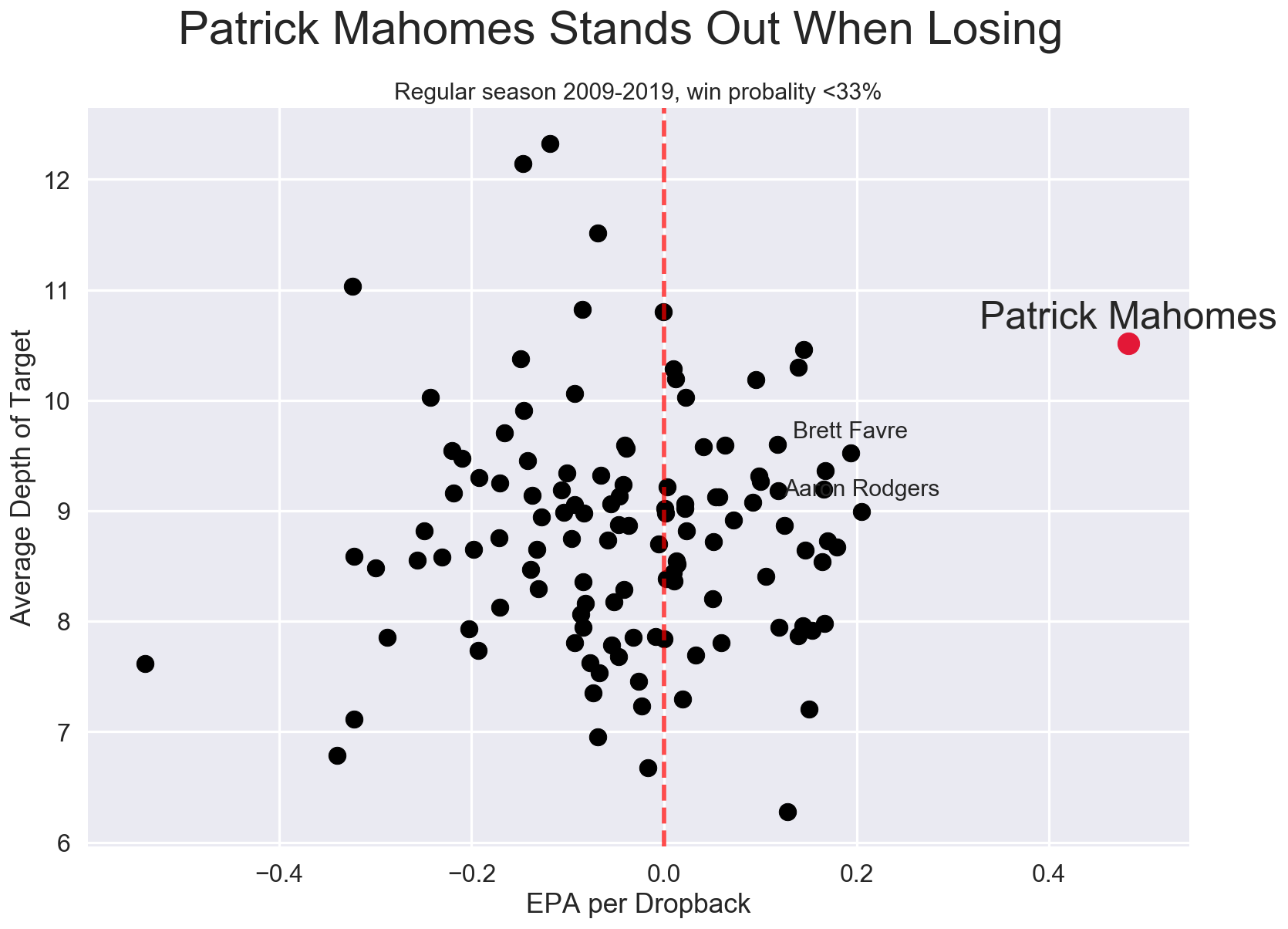 I expected Mahomes to be near the right side of this graph (indicating higher efficiency when trailing), but I certainly didn't expect a gap this big. Mahomes has been more than two times more efficient than the next-best quarterback when his team has less than a one-in-three chance of winning. Interestingly, Mahomes' two biggest comparisons coming out of the draft -- Aaron Rodgers and Brett Favre -- are second and third in this metric.

But again... it isn't even close. On this one, Mahomes really sits in a tier of his own. I don't have an explanation for it -- other than he's the greatest quarterback to ever walk the Earth. I'm looking forward to continuing to monitor this trend.

But what about the Chiefs' running game? Well...

Unlike against the Jacksonville Jaguars -- where Damien Williams was mildly inefficient but LeSean McCoy shined -- both running backs stunk it up this week.

At the end of the day, the Chiefs got the job done -- and most of these runs were when the Chiefs already had a big lead and were facing stacked boxes. But if this is how the Chiefs' running game is going to operate, head coach Andy Reid really should consider passing on every single play.

Which brings us to our next analysis: the Chiefs' play calling.

When analyzing a teams' play-calling tendencies, it is important to separate early-down, neutral game-script plays from the rest of the game. Why? Well, any team that is winning by a large margin is going to run the clock out, and any team that is way behind is going to pass. Further, third and fourth-down play calling is largely dictated by the yards needed to gain the first down.

So instead of looking at run versus pass percentages over the course of the whole game, we only look at first and second down when the Chiefs' win probability was between 20% and 80%.

In these situations against Oakland, the Chiefs passed the ball 62.5% of the time. While I would love for that number to be in the 70s, it is at least a bit higher than the league average of 58%.

Now, lets look at the dominant defensive performance that limited the "red-hot" Raiders (how bad must the Broncos be?) to only 10 points.

While the run defense of 0.20 EPA per play isn't spectacular, it didn't matter much once the Chiefs got up and Oakland had to pass 45 times. But the Chiefs pass defense was excellent -- particularly when compared to last year's numbers. Against the pass in 2018, the Chiefs gave up 0.18 EPA per play. But against the Raiders on Sunday, they gave up -0.19 -- meaning that on average, every time Derek Carr passed the ball, he was actually hurting his team. That's pretty great to see -- especially after Carr and the Raiders lit up the Broncos in Week 1.

That's all for Week 2 of Stacking the Box Score. Hope you enjoyed it!

As always, please leave comments -- or reach out on Twitter (@chiefsanalytics) with what you'd like to see broken down for next week -- or for any clarifications about anything in this week's article.