Welcome to my new weekly column Stacking the Box Score, where I’ll be quantifying what happened in the Kansas City Chiefs’ most recent game.

The problem with traditional box scores is that they primarily use volume stats -- such as yards gained or touchdowns -- or per-unit stats like yards-per-carry. So in this series, I’ll be using metrics that take situations into account, which will allow us to get at a truer measure of what happened on the field.

Here’s a quick primer on some of the stats I’ll be using this week:

More prescisely, if a team is first-and-one at the opposing team’s goal line, the model will predict an expected points value near seven; it’s very likely that the team will score a touchdown. So if a player in that situation then runs the ball in for a touchdown, the expected points added (EPA) won’t be very large.

This metric quantifies how far a quarterback’s average pass is thrown down the field. It is measured vertically (straight north/south) from the line of scrimmage to where the receiver catches (or doesn’t catch) the ball. This metric is a useful way to quantify and compare the gunslingers against the checkdown artists. 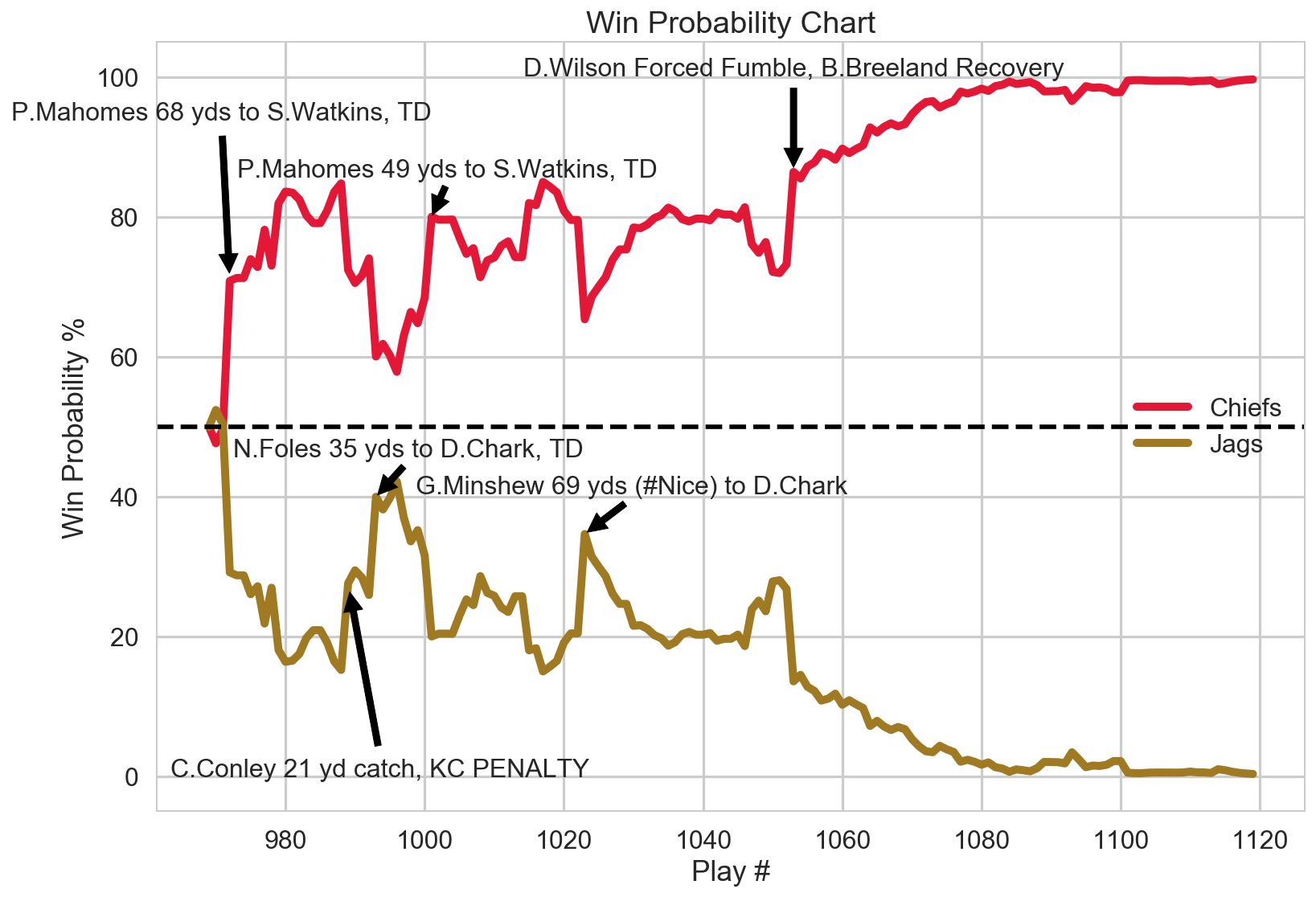 As you can see, the early touchdown to Sammy Watkins set the tone for a likely Chiefs win. After that, the Chiefs’ chance to win dipped below 60% only once -- when Nick Foles threw his own deep touchdown pass. From then on, the Chiefs maintained a solid 70-80% chance of victory; Damien Wilson's forced fumble (and Brashaud Breeland's recovery) sealed the deal.

As I pointed out in my pregame matchup analysis, the Chiefs led the league in forced fumbles last season, so it was nice to see them keep that trend going.

Two of the big plays from the game were Watkins touchdown receptions; he obviously had a big night. But just how big? Let’s quantify it with win probability added and EPA. 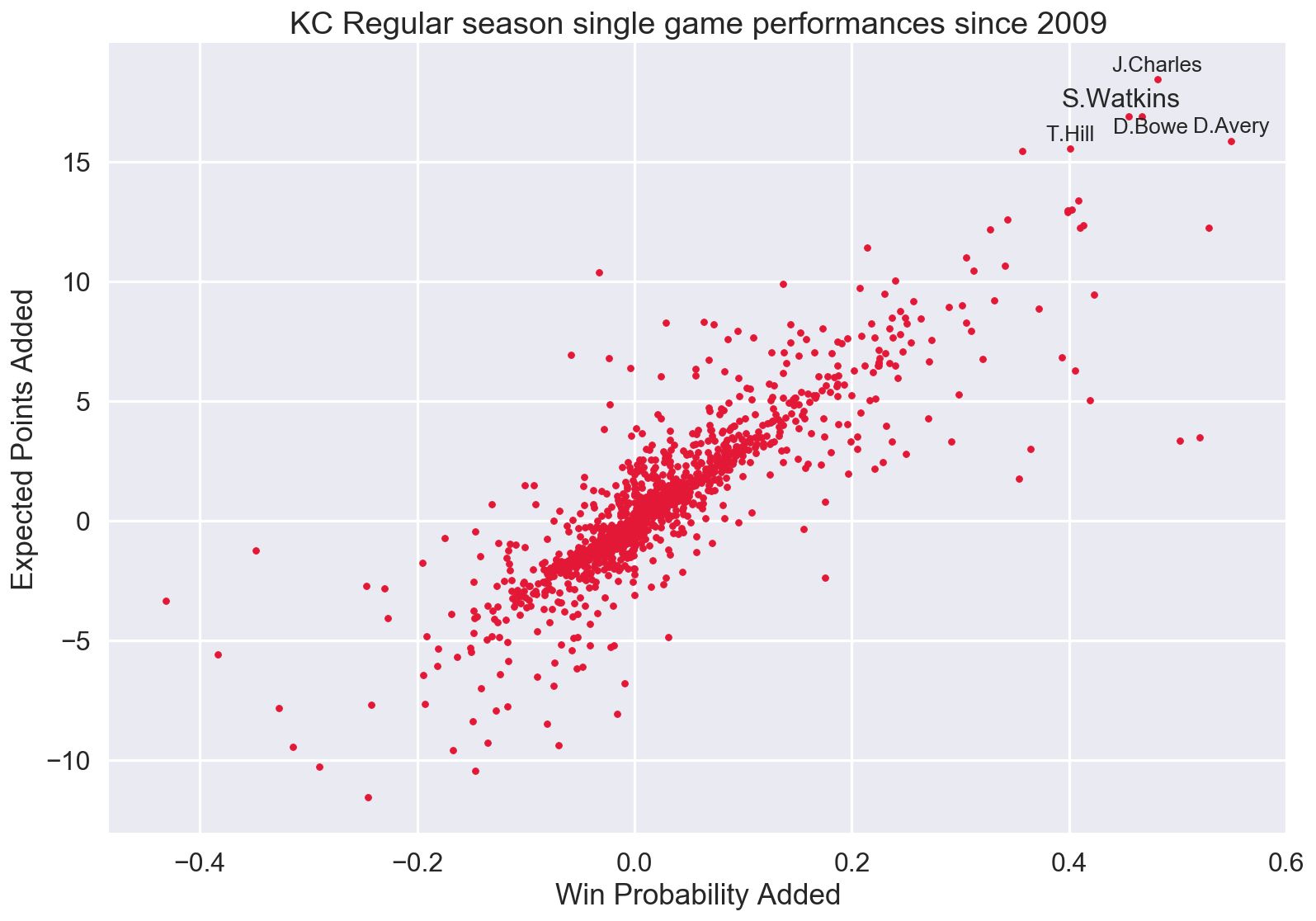 Watkins' game against the Jaguars is in the top five of all Chiefs’ receiver performances of the past decade -- adding 45% total win probability and 16.9 expected points added. This 16.9 EPA has only been topped once since 2009 -- by Jamaal Charles during his complete massacre of the Oakland Raiders in 2013.

Now let’s look deeper at the wide receiver performances from Sunday -- this time isolating air yards (yards gained from the throw itself) from yards gained after the catch. 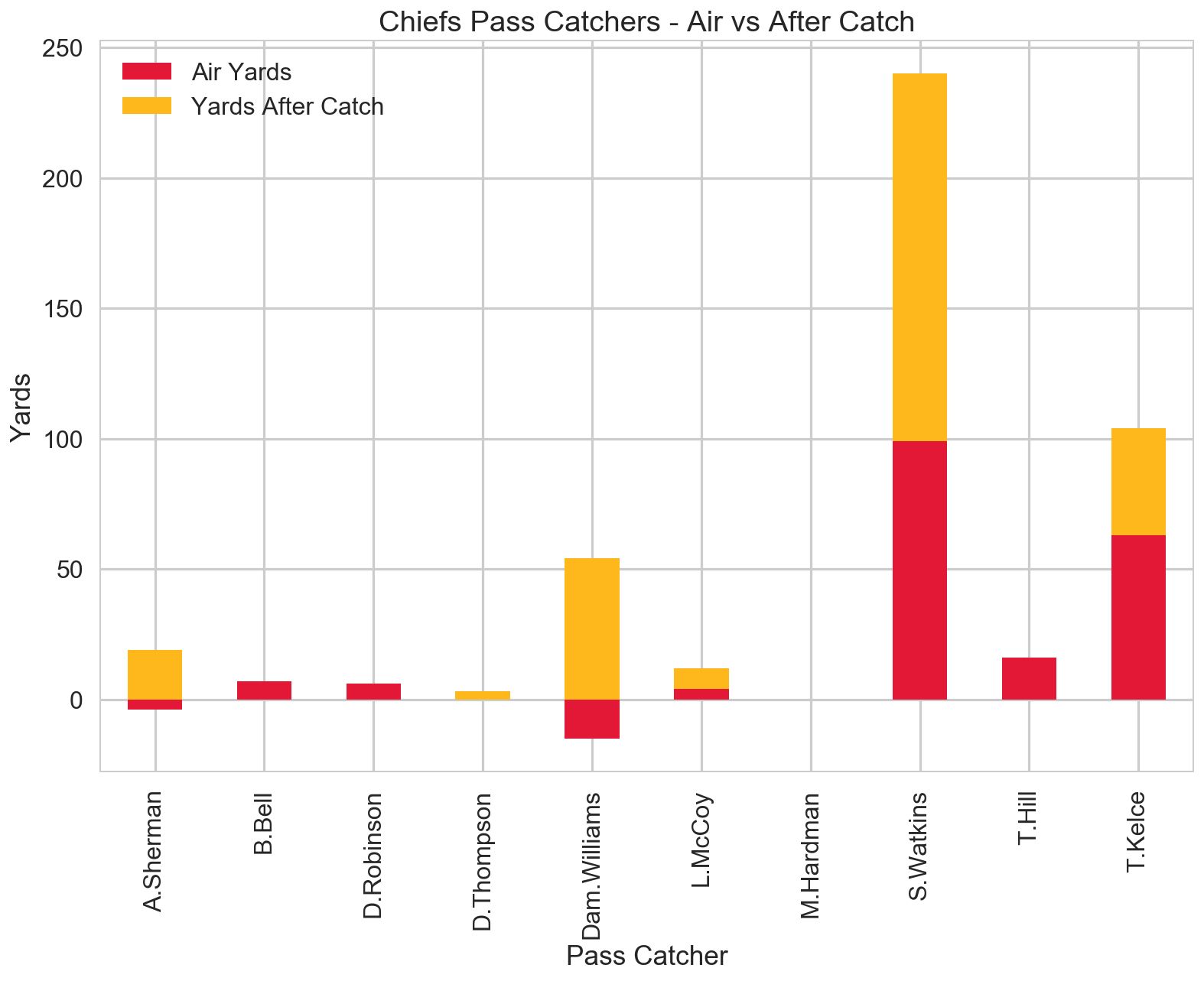 As shown here, where Watkins really shined was in yards after catch. This is consistent with his 2018 season, when he actually led the Chiefs with his percentage of yards after the catch -- which surprised me, as I would have guessed that Tyreek Hill would have led the team in that category.

Now let’s look at the Chiefs running backs against the Jaguars.

It will be interesting to see if Damien Williams encountered far more stacked boxes than LeSean McCoy -- because as far as efficiency is concerned, McCoy looked far superior to Williams on Sunday.

As a running back, generating positive EPA isn’t easy -- because in general, running is not the most efficient play. McCoy, however, had a high success rate of 60% (meaning he contributed positive expected points on 60% of his touches) on 10 attempts.

I'm looking forward to seeing a film breakdown on this -- and seeing if this efficiency difference continues across the season.

While we can certainly just examine Mahomes’ performance as a whole against the Jaguars -- in which he averaged 0.68 EPA per dropback, which is fifth in the league after Week 1 -- I thought it would be more interesting to compare how he played before the ankle injury to how he played after it. The injury clearly hobbled him. What effect did it have? 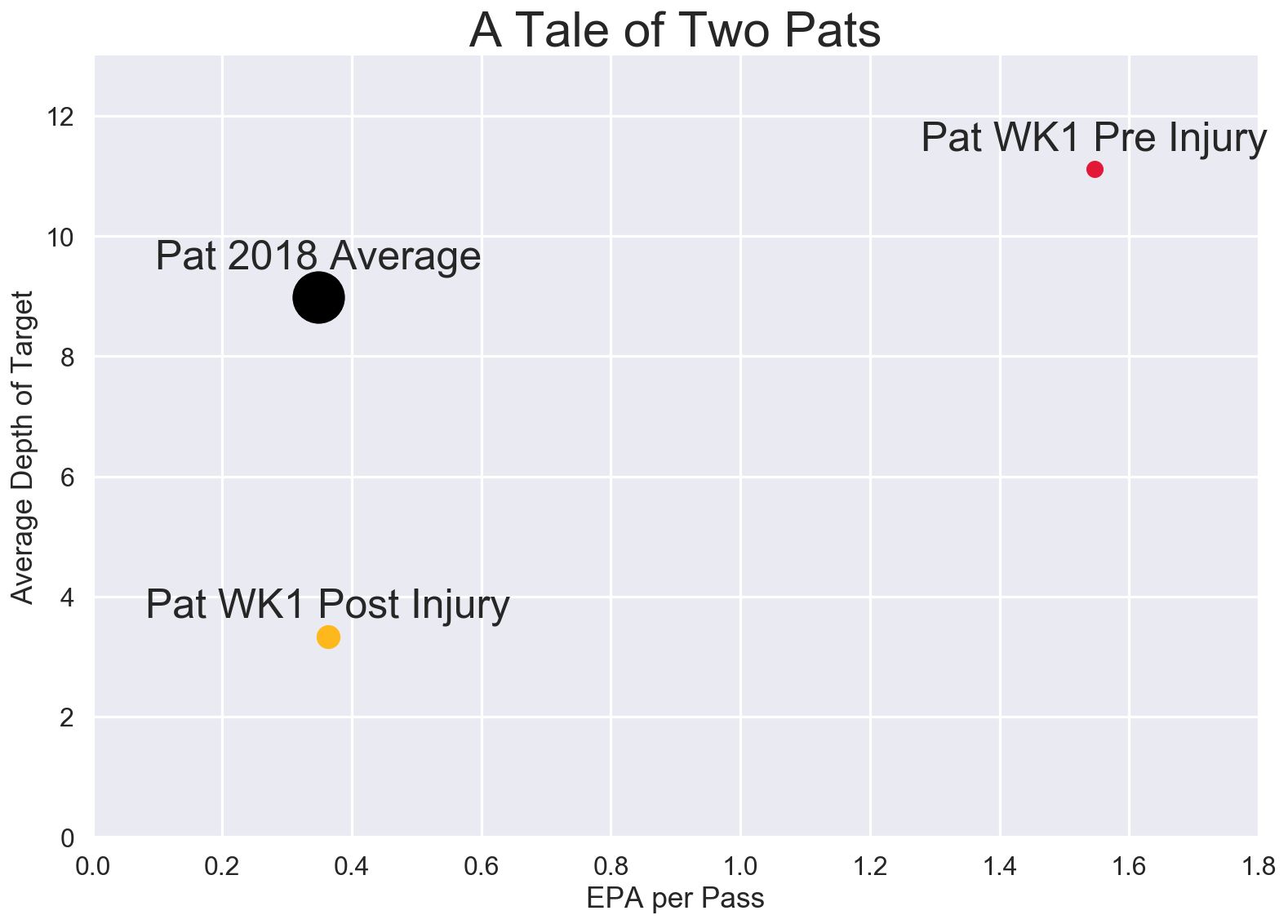 Wow. This is… something else! Prior to his injury, Pat was dealing!

Not only was he throwing deep -- averaging almost 12 air yards per target, which would have led the league last year -- but he was averaging 1.5 EPA per dropback. That figure is five times greater than that of last year's league leader. His name was… Patrick Mahomes.

Even his post-injury number -- small as it was in comparison -- was on par with his league-leading EPA per dropback from last season. And he managed to do this with much shorter passes.

Which means... Andy Reid is a genius.

Next week, I plan on adding quite a few more metrics -- and including defense, too. But just like the Chiefs pass rush (hopefully), I’m still working out the kinks and getting things up and running for the season.

Hope you enjoyed this! Please reach out on twitter (@chiefsanalytics) if there’s anything you’d like to see in next week's analysis.