With a clenched jaw, Kansas City Chiefs quarterback Patrick Mahomes unsnapped his helmet and let it fall to the turf while stiffening his body on Austin Reiter's back. The 300-pound center froze in a push-up plank until the closest thing to Midwestern mythology's reigning God rolled off to his left.

As visibly distraught receivers darted from the twisted knee -- and division rivals knelt on the field -- Mahomes covered his face with his hands, running fingers through his hair as the black, green and blue bracelets on his wrist warped against his cheeks.

Mahomes is out for at least three weeks with a dislocated kneecap. A simple quarterback sneak popped it out of place during the victory over the Denver Broncos last Thursday night .

Early results from an MRI on Friday confirmed there was no significant damage to ligaments in the area. Multiple sources confirmed that a second opinion ‘went well' and that Mahomes' timeline for return is dependent upon rehabilitation.

But before any of that happened, the quarterback waved off the injury cart, walked with assistance to the sideline -- and then walked without assistance to the locker room. It was as if his damaged leg had been left near the down marker just a few yards from the goal line. 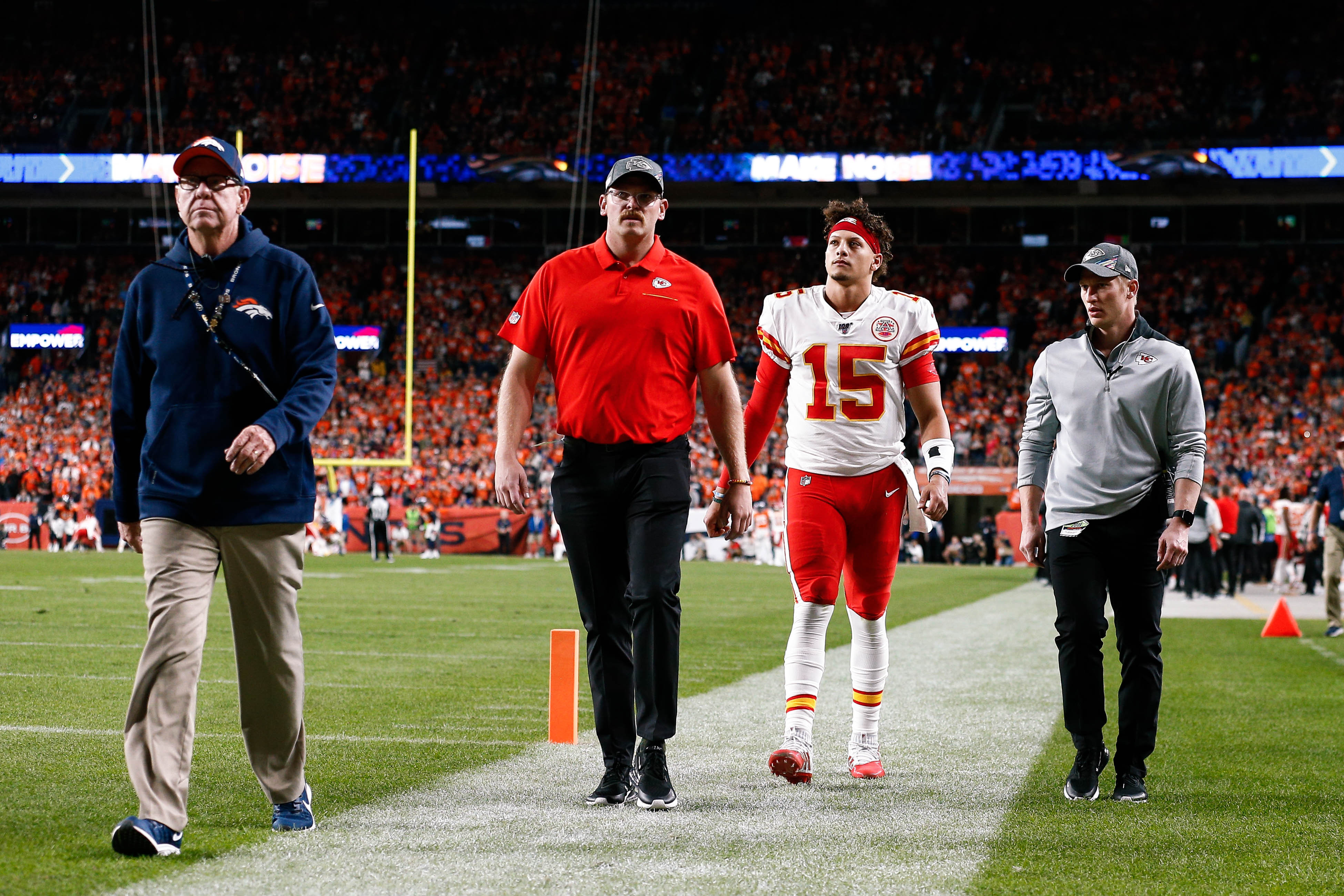 And then he left Empower Field at Mile High. Presumably he was going back to Mount Olympus -- or wherever Herculean individuals like Mahomes reside.

Since then, everyone with at least one kneecap has weighed in.

Reid shouldn't have called a sneak with that hobbled ankle.

The Chiefs should've been less dependent on their star; they'll get rocked the next few weeks without him.

Mahomes should take extra time off; he's the entire franchise, for crying out loud!

Friday brought a lot of these. The reactions are understandable, natural and instinctual -- but this week, they feel a little cynical.

Even with new, engaging reports about Mahomes doing pool therapy (I'm down for water aerobics for Mahomes, as long as the water is not too hot, not too cold, there are lifeguards on duty and he's forced to wear multiple sets of arm floaties), we seem to be missing the meaning in all of this.

To put it another way, we're not getting a solid read downfield.

The Chiefs seek to reach the Super Bowl for the first time in 50 years after losing many starters to extended injuries -- including a quarterback who would make Captain America feel like Paul Rudd. Yet to be honest, they haven't shown any signs they are losing momentum.

This comes with nuance. They haven't yet played a full game without Mahomes. Some of the sound bites coming out might just be company lines. But according to those who speak to players, there seems to be optimism coming from the locker room and players' social media posts (along with tight end Travis Kelce's Old Spice press tour) -- certainly beyond what we might have rationally expected.

For better or worse, this is all part of the story of the 2019 Kansas City Chiefs. To think that the only trying times were going to be surprising losses to the Indianapolis Colts and Houston Texans at home is worth a good, hard laugh.

But there's another part of the story: the Chiefs have made many take-your-pick, no-wrong-answer plays.

Like when the Colts thought they had a sack for a 20-yard loss while chasing Mahomes on a shaky ankle -- only to look up to see Byron Pringle in the fetal position, cradling the ball in the end zone.

Or when the Chiefs defense took Super Bowl-winning statue (and Broncos quarterback flavor-of-the-year) Joe Flacco to the ground nine (!) times after watching their own general and best defensive player (Mahomes) hobble off the field. 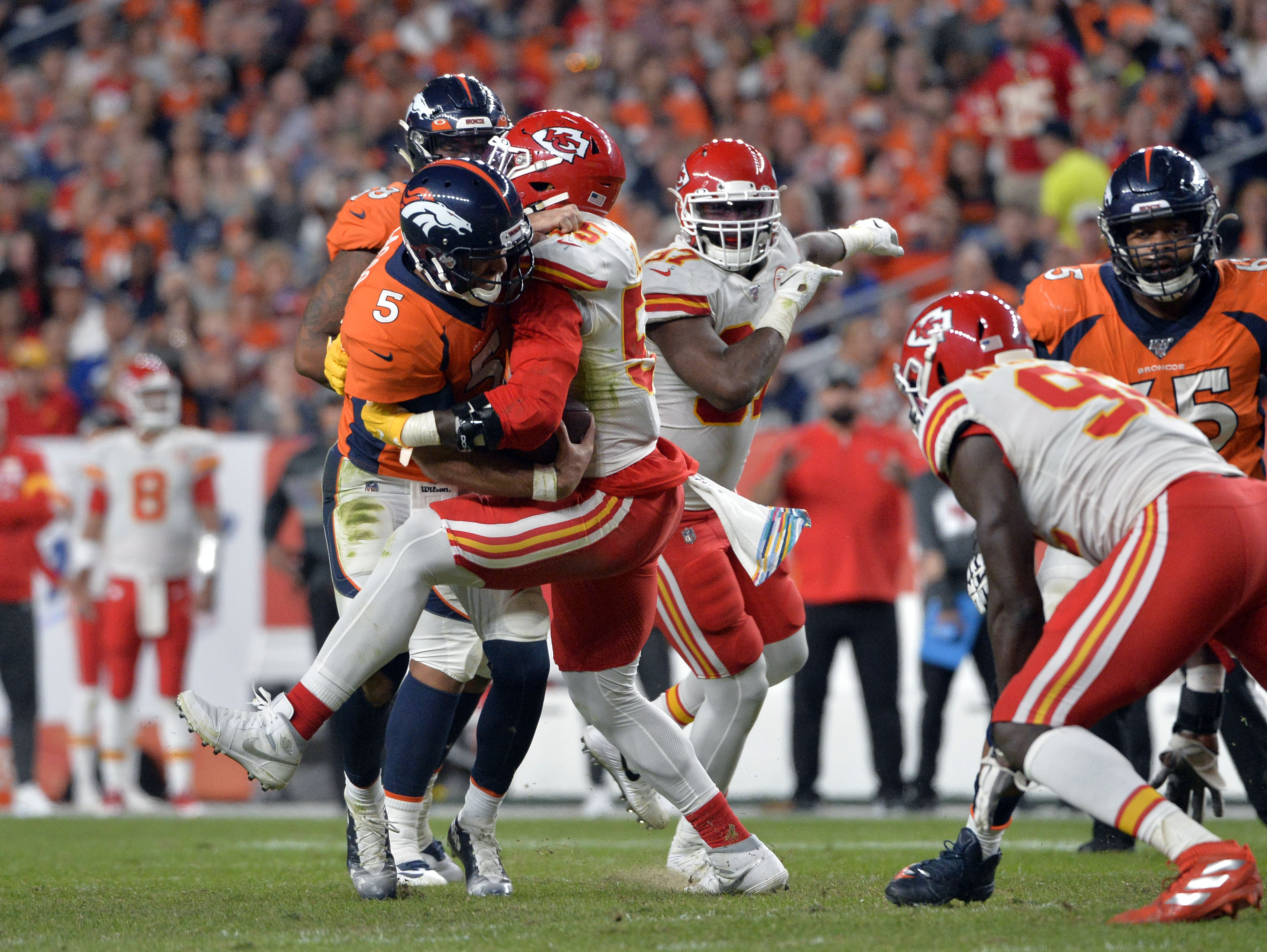 Another part of the story: somewhere between Week 1 and Week 7, the New England Patriots have seemingly locked down the number one seed in the AFC, and will face [some young team] on a cold January night in Foxboro -- with Tom Brady wearing that weird ski hood.

(If we're being honest, I really don't think the ski hood is weird; I just know I'd look ridiculous in it. Maybe that's why I'm not married to Gisele).

Many of the details are still missing; the ending has yet to be written. But should the young team be the boys from Kansas City, the story that emerges will reveal resiliency of unlikely proportions -- and one of the best moments our city has ever had.

These boys are growing up here -- from rookie deals and 22nd birthday parties at the Power & Light district to contract extensions and family vacations together. This challenge is a part of that process. Super Bowl or not, it will help set a course for years down the line.

The citizens of this city -- one where barbecue of a certain gravitas must be earned -- received the greatest sports memories of their lifetimes five years ago, when an unlikely bunch of baseball friends didn't get the message about whether or not they should have been able to compete. They won a championship in New York.

When this football season began, it was the most anticipated Chiefs season in decades. Many equated it to that Royals season of 2015 -- which is a nice thought, but a lazy comparison based only on proximity. This Chiefs team entered the season among the favorites to win in Miami; they were never the underdogs.

But things have changed. The water was already murky. Now there's blood in it. Can the Chiefs continue to float -- despite the sharks?

From Lawrence to Lee's Summit, Chiefs fans want nothing more than to relive a championship season for Kansas City. In this moment -- right now -- the stories of this Chiefs team and the Royals squad that last raised a flag over our skyline have never been more similar.

A parade where Travis Kelce dances in the back of a Chevrolet, hoisting a flag? Where wide receiver Tyreek Hill footraces children to the steps of Union Station? It might not come this February -- and it certainly isn't promised. Maybe the stretch gets too rough in December. Maybe Mahomes needs more than a brace -- or those smelly socks are washed, leaving all the luck in the machine. Or maybe the Patriots are just... the Patriots.

But if wide receiver Mecole Hardman screams into the sky as a champion, it will be because his team weathered a difficult storm-- and most definitely will not leave the young rookie thinking, "Could it be this easy every year?"

Super Bowl teams face adversity (checks math) 100% of the time. If they didn't, on Thursday night after Mahomes went down, perhaps we'd have chosen to watch the Houston Astros beat the New York Yankees. Jose Altuve's walk-off homer the next day was certainly romantic enough to make the case -- and there were plenty of things to which sports fans could react. Because boy... do sports fans love reactions!

Win or lose, after Sunday's game against the Green Bay Packers, there will be more of those. For some, it is part of the fun -- but it would be foolish and disheartening if we didn't take a moment to recognize the story now unfolding before us.

So here we go.

It's time to face the first week without Patrick Mahomes -- the first major downward spike in the Freytag's Pyramid of this season. Take notes. Soak it up. Because there's bound to be more highs after this low. The real fun is getting between them.