From the Fan Posts - PS

Last week, I used the numbers I recorded while watching 250 of Kareem Hunt’s carries in his rookie season, with the help of some math, to assess just how good he was as a ballcarrier, compared to the rest of the 2017 rookies. He was great. This week, I’m going to flip those numbers on their head (heads?) and look into how well the Kansas City Chiefs offensive line blocked for Hunt.

(Note: I don’t have any cool numbers for the passing game; this is all focused on the running game.)

It was certainly an interesting season for the unit. Through the first couple weeks, the line - and the rushing offense, in general - was firing on all cylinders. Kareem Hunt ran for well over seven yards per carry, and the Chiefs offensive line was a comfortable first place in Football Outsiders’ run blocking rankings (those rankings have since changed, and there isn’t an archived page from that point in time, so you’re just going to have to trust me here). Then they fell off. After a series of particularly unfortunate injuries, Hunt ran at a flat 4.0 yards per carry in his final 12 regular-season games, and the Chiefs dropped to a lackluster 12th, over the entire course of the season, in FO’s rankings.

That drop-off wasn’t super apparent in the overall box score stats, and it’s hard to track everything that happens purely with film, but that’s where my numbers come in to help. Because I don’t want to waste hundreds of words here on something I’ve already written out, I’d strongly advise you to glance through the "process" and "stats" sections of that Hunt article now so that you have an idea of the terms I’ll be throwing around.

It was a middling performance, all things considered. While the line provided an above-average baseline level of yardage that any back could gain (what OL-GY/C measures), it was a bit below-average at providing Hunt with opportunities for more. Logically, Kansas City finished about average when putting those two numbers together. But, there is so, so much more to these numbers. Allow me to start scratching the surface:

When assessing an offensive line’s overall performance, it’s best to look at the OL composite score, a single-number evaluation. The cool thing about it is that when you break the numbers down, game by game, you now have a way to measure and compare different weeks’ performances in relation to one another.

The higher an OL composite, the better, and with the help of Microsoft Excel, you can break those relative rankings down into percentile scores. Now you can see how the unit’s performance fluctuated from week to week. (For those not initiated into the math world, a recording in the __th percentile is bigger than __ percent of all recorded numbers.)

And when looking at those week-to-week performances, it’s pretty easy to see that things started well and then they went south:

The Chiefs started the season with one not-great, one pretty-good and two legitimately awesome run-blocking games. Then they fell off to a bad performance in Week 5 and an abysmal performance in Week 6. They recovered and gathered some momentum only to crater once more in Week 11. But hey, they finished the season strong. Up, then way down, then gradually up again, and right back down.

A lot of different moving pieces came into play here. It’s wonky to write out, so I put together a bit of an infographic instead: 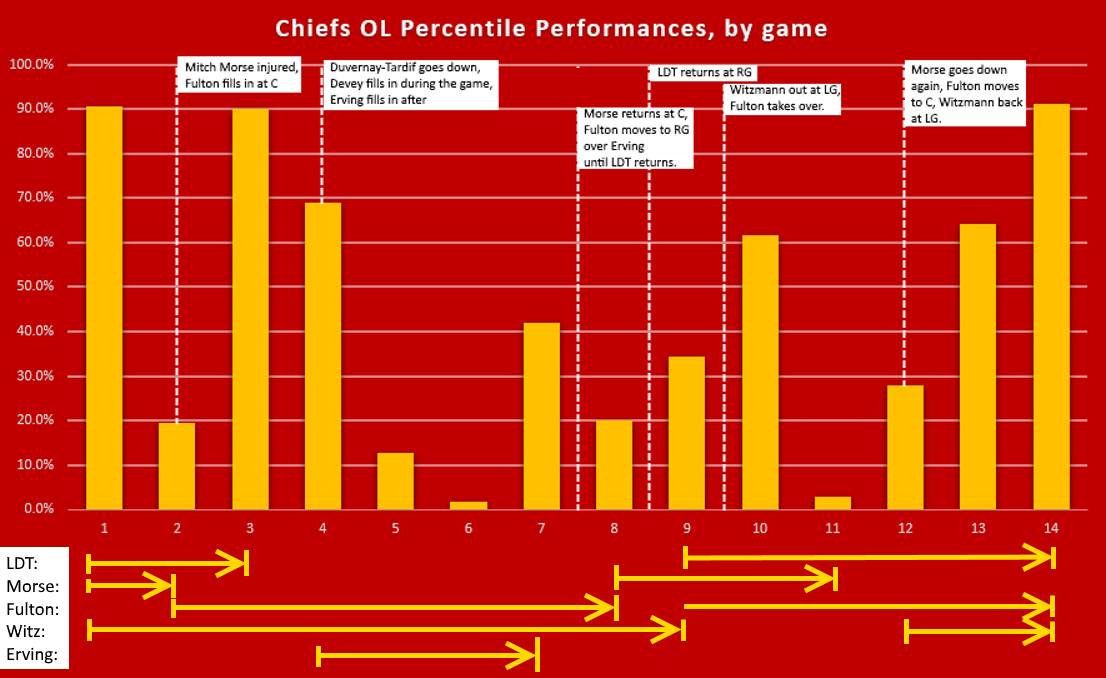 On top is each week’s performance, alongside the major personnel moves that came along the way. The bottom shows which games each of the Chiefs’ most in-and-out contributors played in. As you can see from both the recap at the top and the arrows on the bottom, the OL’s interior was constantly in flux, while the two tackles remained perfectly stable until Week 17 (but my tracking data stops after Week 15).

So what really happened here? Most noticeably, the Chiefs plummeted after Laurent Duvernay-Tardif went down midway through game No. 4. We’ll get to that. Before then, Mitch Morse suffered his first injury in their second game. The Philadelphia Eagles -- a team that doesn’t have the worst defensive interior -- took advantage of that loss and blew stuff up. However, Zach Fulton evidently provided somewhat of a stabilizing presence, and the Chiefs fared well before LDT’s injury. As you can see, they even put together a solid performance against the Redskins (in game 4), where they performed around the 70th percentile... before dropping off a cliff in the next two games against Houston and Pittsburgh.

Morse returned after a mediocre showing against the Raiders in game No. 8, but the Chiefs still couldn’t do much (to be fair to them, they played the Broncos that week, and the Denver run defense melts offensive lines, qualitatively and quantitatively. More on that in a future post). LDT came back the next week in another uninspired performance and frustrating loss, which might have prompted Reid and Co. to slot Fulton in ahead of Bryan Witzmann at left guard.

That move looked smart for exactly one game before the offensive line inexplicably collapsed against the Bills. After that? Morse went down again, which pushed Fulton back to center and Witzmann back to left guard. Consequently, their performances… steadily gained? They stepped up from atrocious to bad, to good, and finally to great by the final game. Those numbers are about the opposite of what I’d expect, so I’ll let you pick the narrative.

As I said, there were many moving parts throughout the interior almost without pause. Look at how rarely they had three arrows play together in consecutive weeks as an illustration of what I’m talking about. They played just six of those 14 games with the same lineup as they played within the week prior (seven, if you count Week 1). There was very little continuity for this group, and instability up front is a recipe for disaster. Of course, nearly every team has major health troubles up front every year, but this can still go a long way toward explaining why the Chiefs fell off so hard.

My next question: How well did the Chiefs perform with different personnel in the lineup? Looking at game-by-game splits can help us dig a bit deeper and see which individual players, combinations and general themes worked (and which ones didn’t). So let’s get to splitting! I’m going to look through a series of on-off (for lack of a better term) collections of games, starting with Duvernay-Tardif:

As we can see, the Chiefs offensive line was above-average, overall, with LDT in the lineup. Good for sure, but not that good. Meanwhile, they fell off a dadgum cliff without him. Those 1.47 OL-GY/C would be better than just two of the 23 offensive lines I’ve tracked thus far. And the hole rate… well, the hole rate would be in a league of its own -- the lowest hole rate I’ve measured is 29.6 percent. Without throwing any more numbers at you, that’s a huge gap. Clearly, things went pretty off-the-rails without the doctor up front.

Next up, Mitch Morse:

In this case, the Chiefs offensive line performed better, in aggregate, without Morse. Mind you, there were many variables in play each week, so the takeaway here shouldn’t be that Morse is or was bad -- even some adjustment for opponent could soften this blow a decent amount. The unit just didn’t play as well, all things considered, with him in the game. What I can say, though, is that Morse wasn’t nearly as irreplaceable as LDT.

Now, let’s look at how the Chiefs played with both, one, and neither of those guys in the lineup:

Interesting results for sure, but I’m not sure how convincing they are. The competition wasn’t noticeably better or worse for any of the three splits, so you can’t really use the strength of schedule to explain why the line performed better with just one guy in the lineup instead of both.

Unless I’m missing another explanation, you’re kind of forced to accept the idea that the Chiefs were indeed better with just one of them -- if you accept what the data is saying. And in this case, I don’t accept it. Instead, I think the numbers got a little funky out of pure chance, without a big enough sample size to keep them in line. Perhaps there’s fire to this smoke, but just this single indication won’t persuade me.

One idea I do feel safe taking away from this? The Chiefs aren’t in good shape if neither guy is in the game. Shocking, I know.

To transition now, we briefly saw Witzmann pulled in favor of Fulton before KC had to reverse course. Was this successful?

Again, we’re hamstrung by sample sizes. It’s even more difficult, in this case, because one of those latter two games was the bizarre bottoming-out against the Bills. At least we can confidently say that the Chiefs were okay with Witzmann in the lineup.

Finally, I mentioned continuity earlier on and want to see if the stats show that it mattered very much within the season. Of course, I don’t think this "playing with the same squad as last week" is a fair determinant of "continuity." It’s not fair to say the Chiefs enjoyed "continuity" in Week 5 -- when they were starting the same lineup as Week 4, but missing both Morse and LDT, who they’d spent the entire offseason and first month playing with. But, for the sake of discussion, let’s look at the splits between games in which the Chiefs did and did not start the same lineup as the week before:

As I kind of expected, there wasn’t much of a difference between the two sides. A glass-half-full takeaway? By performing near-average in those weeks with new lineups, it seems like the OL was pretty good at setting its feet and not collapsing. Not the most fun idea, but it’s still important when we’re talking about offensive line play.