I was born in KCMO, but was moved to Albuquerque, New mexico at nine months old. KC was still in my blood and I grew up watching Chiefs football the few times it would be on TV in ABQ. This is a Cowboys town primarily since all the yahoos here bandwagoned over there in the 90's and forgot to bail out. Some of those have now bandwagoned over to the Broncos, but it's still primarily the Cowboys here. This meant I got to watch the Chiefs every time they played the Cowboys, as well as every game vs Denver.

When I was younger, I watched the Chiefs not really understanding the game, nor really understanding what was so great about them. I just watched because my father watched. Then came along my all time favorite Chief, Christian Okoye! I loved watching the Nigerian Nightmare run all over people. Trucking fools, making people miss and destroying arm tackles. He got me hooked. 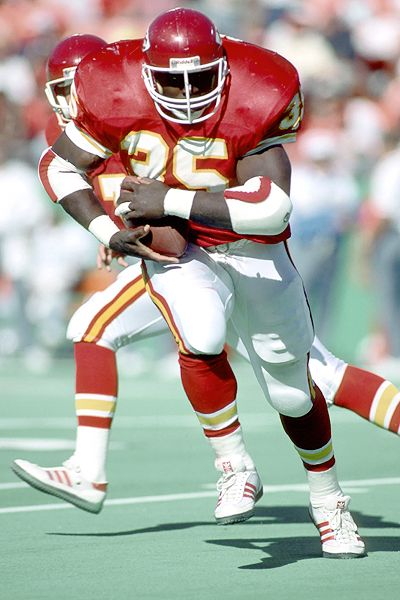 Later with Marty ball as well as watching DT and Neil Smith harass QB's and just create chaos was insane! The late 80's and 90's were the best time to be a Chiefs fan (aside from probably the 60's, I imagine). Growing up in fairly consistently successful years cemented my love for the Chiefs.

All in all, it was tough being a full time Chiefs fan in Albuquerque because there wasn't much news about them aside from stats in the paper. I was able to keep up with the team somewhat and learned bits and pieces as I grew up and into adulthood.

I don't honestly think I became more than a casual fan until joining AP. It turns out that I wanted to learn more (a lot more) about the Chiefs but I didn't know where to start. Although the internet gives you access to a lot of information, it is hard to really know what to research, learn about or look for when you are not immersed in all things Chief! I have learned more about the Chiefs in the last three years than I have my entire life, and I love it! I also learned about KC BBQ, thanks bear and Tony!

Knowing more leads to higher highs and lower lows. My highest high in recent years was the playoff annihilation of Houston. I was so damn nervous going into that game. I was sitting in my living room by myself, sweating and really hoping that our first drive wouldn't stall out. Then Knile caught the ball and he ... was ... gone!! The most amazing feeling came over me and was noticed by the neighborhood as I screamed like a little girl!

Then the lows ... I let myself get so wrapped up in the team last year, I had the biggest let down I have ever had as a Chiefs fan. I don't blame the team for that, it was my own doing. I was so convinced we were going to the AFCC, I didn't leave room for the possibility of a loss. I literally didn't watch another game of football after the Chiefs lost. Absolutely ridiculous, right? Well it happened, and I am to blame.

Of course, once the season was completely over, it didn't take long to get back to being positive and looking forward to this year. I can't wait for another year of successful Chiefs football! Go Chiefs!

P.S. Learning about others stories about how they became fans is awesome!