A last-minute edition of Know Your Draft Crush with ChiefsEnthusiast!

After seeing everyone from Cam Erving and DGB to Tyler Lockett and Eric Kendricks reviewed in these articles, I just knew I had to try one myself before the draft starts Thursday evening. The target of my film review? 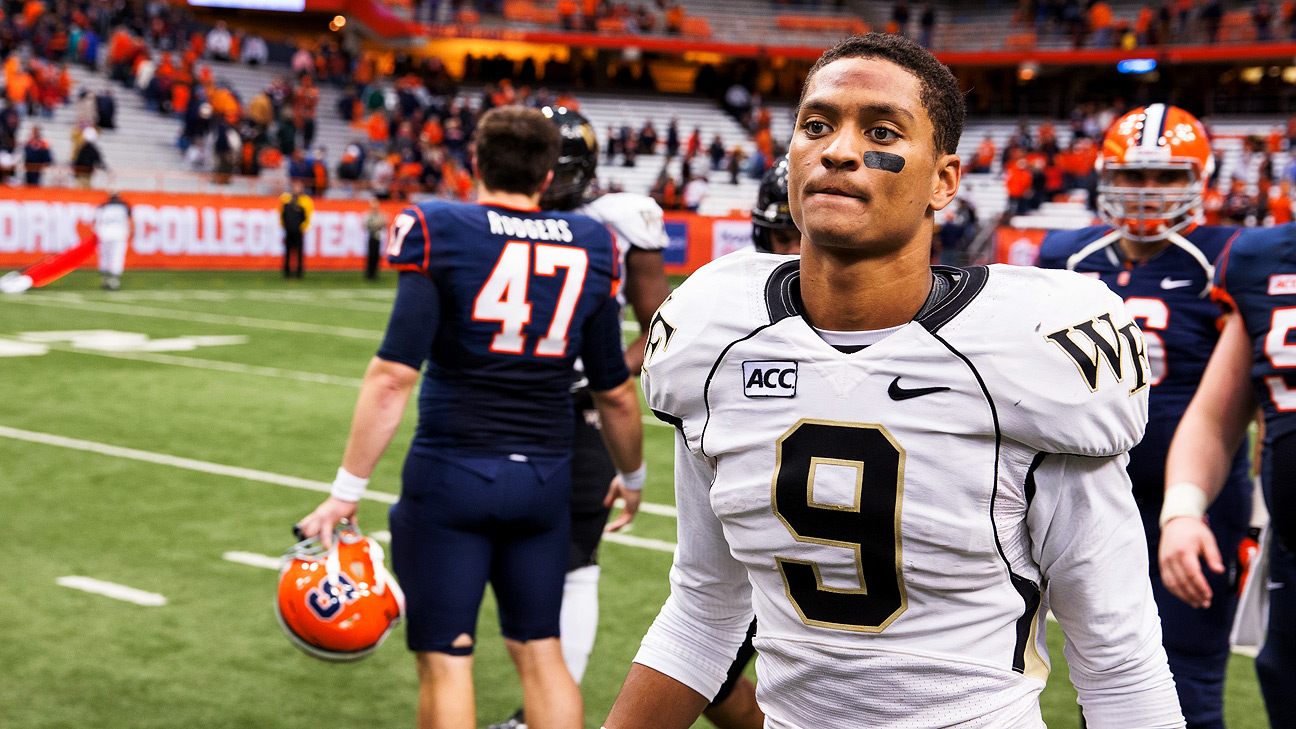 If you've been frequenting the Weekly Mock Draft Posts, there's a good chance you've seen me pulling for Kevin Johnson. And while I'm going to be as objective as possible while I review his film, you should know that Johnson's stock has been rising for a reason; the kid can play very well.

While skinnier and lighter than the prototypical corner, Johnson's combine results were good to great overall. His 40 time wasn't as fast as could be hoped, but his vertical jump and broad jump were among the best of his position group. Johnson has the athletic ability to theoretically tun with the big dogs of the NFL, but can you really trust the Underwear Olympics results? Not by themselves, and to complement them, I turned to my good friends at DraftBreakdown.

There were 6 videos for me to review, although one was from 2013 so I skipped it in the interest of time and relevancy. Five games worth of footage, against Clemson, Louisiana Monroe, Virginia Tech, Florida State and Syracuse, a nice mix of teams ranging from good to mediocre.

So let's jump right into it. For the sake of stats, I kept track of which receiver Johnson was responsible for as best I could, and charted each coverage as a "success," where he managed to cover his man well and prevent a play, a "failure," in which he didn't, or a "neither" where he was involved in a blitz/run stop/not in coverage. Let's begin!

Johnson had a fairly positive game against Clemson, allowing only 1 catch for 5 yards and picking off Clemson QB Cole Stoudt once.

What really jumped out at me was his physicality; he wasn't afraid to do a bit of pushing, shoving and hand-fighting with the wideouts, and giving his all as a tackler in the run game. However, that was not as helpful as could be imagined, as he drew a fairly flagrant pass interference early in the second quarter.

Yeah, that was ugly.

However, aside from that, KJ9 played extremely solidly. He usually played off-man coverage, although he lined up near the LOS several times, making a couple good stops in the run game, as well as recording 2 tackles for loss (one against the run, the other against the pass.) Let's hope this continues as we head to Louisiana Monroe.

This game wasn't as positive as the Clemson outing, but wasn't bad either. Near the end of the first quarter, Johnson whiffed badly on a read and left his man uncovered, allowing a huge gain for ULAM, although he did make the tackle to bring him down. About two minutes later, he made a good play to bat away a ball, but the play was iffy on whether it should be a pass interference penalty. In total, he allowed 3 passes for 38 yards, 29 of those yards on the previously-mentioned play.

ULAM was a very ground-heavy team, so KJ9's cover skills weren't as in demand. He lent some assistance in the ground game, only recording 1 1/5 to 2 tackles by my count, but he gained quite a few special teams snaps, scoring a TD off of a blocked punt early on.

While KJ9 allowed 3 passes, you probably noticed I only charted 2 failures. The reason for that is that on one of the completed passes in his direction, he had no way of preventing the completion without knowing the play beforehand, and from his off-man coverage he could only get there so quickly. He recovered well and brought down the receiver as quickly as he could.

However, he also garnered a flag on special teams as well, on a strange running into the kicker penalty, documented in the gif below.

It looks to me like he just barely scraped the dude's towel, but a penalty is a penalty.

Again, KJ9 played a lot of off-man, with a handful of snaps playing inside the box on run plays. He was just as physical as he was against Clemson, making several good hits and playing hard. I'm liking his chances so far, lets see if that holds up against Virginia Tech.

KJ9, despite solid coverage, still let in 3 passes for a total of 19 yards. 2 of those passes came almost immediately, with KJ9 paired up against Virginia Tech WR Isaiah Ford. While he was initially unprepared, KJ9 recovered and was extremely solid for the rest of the game. Overall, though, thanks to both Virginia Tech's general offensive ineptitude and their run-heavy approach, KJ9 really didn't get that much work here.

With about 19 seconds to go, KJ9 did have a nice play that resulted in a fumble. To me, it looks like KJ9 forced the fumble, but as it's less-than-clear whether that was the case or not, I'll leave you the gif and let you decide for yourself.

The only game so far with more successes than neithers, KJ9's outing against a prolific passing offense let him shine. Allowing 4 catches for 14 yards, KJ9 was in his element, taking snaps both as slot corner, outside corner, and as a blitzer, with 3 QB rushes, one of them leading to a double-clutch by Jameis Winston resulting in an incomplete pass.

This game was also a showcase for KJ9's near-brutal style of play. One particular Posterized moment stood out, with a very shady hit KJ9 delivered to an FSU receiver Kermit Whitfield, in gif form below.

I winced watching that. Absolutely brutal hit from such a skinny guy. The announcers also remarked that he was thrown out of the game against Louisville, which lends itself to a growing concern of mine that KJ9 might be too physical and lead himself to either an injury or a suspension.

Another instance of questionable on-the-field morals came when KJ9, after a beautiful bit of pass-defending, got away with what looks like a bad case of taunting, also in gif form below.

Yeah, an NFL officiating crew wouldn't miss that. There was also an uncalled holding early in the game, but it wasn't very exciting so I didn't gif it for you. If you want, it's at the 2:03 mark of draftbreakdown video.

Despite the possible penalties, KJ9 showed that he could easily hold his own against an NFL-caliber QB throwing to a talented WR corps, noticeably Rashad Greene, a possible second-rounder in this year's draft. That nasty streak of his is something that he'd need to get under control once drafted, but his rate of success in coverage is highly impressive. Next, we travel to Syracuse for the final game.

Syracuse put a whupping on Wake Forest overall, but KJ9 did a pretty solid overall game, as is usual. KJ9 allowed 3 completions to his man for 36 total yards, 22 coming from one long pass play as a result of getting burned off the side by a tailback, as you can see below.

It looks like KJ9 was going to rush the passer, but as the tailback shoots past him he decides to follow him instead, allowing a good chunk of yardage to be surrendered as a result of his split-second indecision. Overall not too big of a mistake, but those kind of things can cost you the game against Peyton Manning, Philip RIvers or Aaron Rodgers.

The successes are down from the FSU game, but that's mostly a result of the ball being thrown elsewhere and a good helping of running the ball. Syracuse had quite a few blocking WRs out to keep their hands on KJ9, which freed them up to pass more and sent KJ9's numbers into the neutral zone.

Syracuse's pass-happy offense picked on the other cornerbacks and mostly avoided KJ9, which is either a good sign, showing that he's a threat in the QB's eyes, or was a bad sign for the Deacons, showing the rest of their DBs were sub-par. I would assume the former, as the rest of the Wake Forest DBs were able to hold their own, with KJ9 leading the pack. 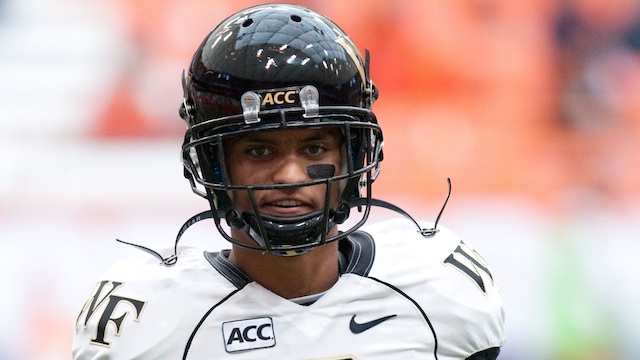 While he's a bit more rowdy than I had previously thought, the scouts were correct in that his cover ability is fantastic. With only 11 failures in coverage over the five surveyed games, KJ9 had a very high success rate against a variety of offenses, from ground-n-pound attacks to Air Coryell styles. He looks faster than his 40 speed would indicate, as he caught up to several receivers and runners from behind, and he has the jump-ball skills to compete with bigger, stronger receivers. He'll need to mature and refine his volatile nature on the field, but he would be able to step onto the field day one and carve out a spot for himself. I would have like to see more INTs than ended up happening, but when you stick with your assignment as well as KJ9 usually does, I can forgive that.