Fans of the Iowa Hawkeyes are not happy with Kirk Ferentz this week. Iowa State missed a last-second field goal, meaning the game would’ve gone to overtime … had Ferentz not called timeout right before the kick. The Cyclones got a second shot at the game-winner, and they made the kick, winning the Cy-Hawk trophy.

Living in Iowa but having no interest in the game, the reactions have been interesting to watch. Yesterday, one of my professors came in to class with the introduction, "We’re not talking about the Hawkeyes today." There has been quite a lot of Iowa State gear around campus and barely any Iowa gear. The words "Kirk" and "Ferentz" have become taboo.

The Iowa-Iowa State game was fresh in my mind when I sat down to watch the Chiefs take on the Broncos 24 hours later. Andy Reid was already under fire last week for not getting the ball to Jamaal Charles, so I was curious to see if he would do anything this week that would bring on more criticism.

Then, near the end of the first half:

Yes, Andy Reid is punting. Yes, he should be going for it. 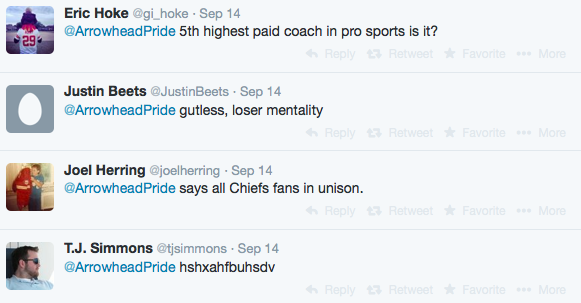 Because the Chiefs actually almost nearly beat the Broncos, most of the anger subsided by the end of the game. Sure, we could second-guess some of the decisions Andy Reid made near the end of the game, but we all expected the Chiefs to lose by double-digits, so we can’t be too upset about them.

Had Reid made more confusing decisions throughout the game, I wouldn’t have been among those calling for his head- not that anyone really should have been two weeks into the season. But I think it’s worth taking a look at how Reid stacks up to other current head coaches around the league. This isn’t to say "We should fire Andy Reid!" or "Andy Reid is the best coach ever!" but more to give us an idea of what to expect as we move forward this season. No coach is perfect, but maybe if we get to understand Reid’s tendencies, it will be less maddening when he decides to punt on fourth and short in opposing territory.

Ah, who am I kidding? It will still be the most frustrating thing in the world. But let’s give it a shot anyway.

The first thing to understand about Andy Reid is that he’s been doing this coaching thing for awhile. By the end of the season, he’ll have moved up to at least 20th on the all-time wins list. There isn’t a bad coach anywhere close to Reid on the list. Most in that range are considered great, or even - dare I say it? - elite. Most coaches who are currently active are well below Reid on the career wins list. Here’s the top five, and the only five with more than 100 wins:

Notice that outside of Bill Belichick (who must have made some sort of satanic bargain), Reid has the highest winning percentage. This is key to understanding Andy Reid: His teams are consistent. They’ll have off-years occasionally, and this year is looking like it might be one of them. But Reid’s teams don’t have long losing streaks (certainly not year-to-year), and they win more often than they lose.

However, if we measure coaches by straight winning percentage, Andy Reid falls behind more coaches. The easiest explanation for this is that there are a number of new coaches who have fallen into good situations with lots of talent (see: Bill O’Brien, Chuck Pagano, etc).

There’s something else interesting lurking behind the numbers when you rank coaches by winning percentage. Let’s line them up next to the quarterback they’re most associated with:

*Alex Smith has still played more games under Jim Harbaugh than Colin Kaepernick has (though that will change next week).

But the big thing to take away from this table is that nearly every active coach with a higher winning percentage than Andy Reid has had a franchise quarterback play nearly every one of their games. Even Bill Belichick had an impressively hard time winning games in six-plus years in Cleveland and New England prior to Tom Brady. He tried and struggled with quarterbacks such as Mike Tomczak, Todd Philcox, and Eric Zeier. Before Brady, Belichick averaged around six wins per season as a head coach

Andy Reid, on the other hand, has won well over a third of his games without his "franchise quarterback," Donovan McNabb. McNabb rarely played a full season with the Eagles, but Reid still managed to obtain winning season after winning season with backup QBs in a supporting role. Once McNabb flew away from the Eagles, Reid continued to find ways to win. There’s a reason that Reid has a reputation for getting the most out of his quarterbacks, and there’s a reason to expect that Reid is doing what he can to get the most out of Alex Smith.

Challenges have gotten a lot easier over the years - thanks to expanded replay reviews, coaches no longer need to challenge scoring plays or turnovers, so they don’t have to take as many risks to gain possession or points. This means they can save their challenges for more "sure-thing" plays.

Among active coaches, the league average success rate on challenges is just 44.6 percent. Andy Reid has a slightly higher success rate, at 48.3 percent. This includes a stellar 7-of-8 last year, and what probably could have been two more correct calls on Sunday. There's a handful of coaches with higher success rates than Reid, but most of those are relatively new coaches who have only challenged a few times and benefitted from the easier challenges of recent years.

If you take out coaches who have challenged less than 20 times in their career (and that’s a rather clear cut), only three of the remaining coaches have better challenge records than Andy Reid: McCarthy, Tomlin, and Rex Ryan.

It’s essentially been proven by now that icing the kicker does nothing. It doesn’t cause any significant drop in field goal success rates, yet coaches continue to do it. I don’t have any problem with, at the end of a game, using a leftover timeout well before the snap. You probably aren’t going to use that timeout anyway, and at the least, there are a few minor benefits from calling timeout (i.e., allowing your defensive line to get rested).

I do have a problem with taking a timeout immediately before the snap, rendering the initial kick a "practice" kick. When Iowa called that timeout on Saturday, a friend turned to me and asked "Why would you call timeout there? If the kicker makes the first field goal, they’ll just say ‘Okay, that worked’ and do the same thing. If he misses it, he’ll make the necessary adjustments."

In the past 10 years, Andy Reid has had five opportunities to ice the kicker at the end of a game. (In a lot of other cases, he already burned all his timeouts, which is another problem entirely - and a very important one, at that.) Reid iced the kicker three times out of those five.

One of those cases was in Week 4 of 2012 against the Giants. Down 19-17, Lawrence Tynes of the Giants (remember him?) attempted a 54-yard field goal for the win. He missed wide left … but Reid had called a timeout, allowing for a re-kick. The Eagles received a gift on the re-kick. Tynes hit it straight down the middle, but it came up short, and the Eagles survived - no thanks to their coach.

Andy Reid is always going to baffle us with his timeout usage. I don’t know if we’ll ever figure out how he manages the clock. The best we can hope for is Reid not making like Kirk Ferentz (or himself in 2012) and gift-wrapping a win for another team. On the other hand, if he called timeout right before the snap on every Cairo Santos attempt, maybe Santos would have a better chance at making field goals.

(I’m sorry Cairo. That was uncalled for. I know you’re trying your best. Don’t get more nervous because of me. Just block it all out. Don’t think about how you’ll get fired in a couple weeks if you miss more field goals. You’re a strong, independent kicker. I know you can do it.)

Nothing tells us more about a coach’s philosophy than his decisions on fourth downs. It was actually a poor decision on fourth down that inspired this post, and 1,500 words later, here we are.

But how do you measure what’s the "right" decision on fourth down? What if, statistically speaking, Andy Reid made the right call bringing on his punting unit in the second quarter of a close game? (spoiler: he didn’t)

The New York Times has actually been working on this problem for awhile, and midway through last season they unveiled the "4th down bot." The "bot" is an algorithm that decides whether or not coaches made the right decision on fourth down. You can find all of those decisions here.

In Week 2, coaches made the right decision about 90 percent of the time. This includes both correct calls and decisions that are too close or complicated to call either way. When coaches made the wrong call, it was almost always too conservative. Such was the case with Andy Reid’s decision on Sunday. The bot was not a fan:

Here’s more information about why, specifically, we should’ve gone for it.

This isn’t a one-time thing with Reid either. His fourth-down calls are consistently more conservative than the league average. (Reid makes the correct call about 79 percent of the time, about 10 percent worse than last week's league average.) Part of this is that younger coaches are being more aggressive, but Andy Reid is fairly conservative anyway.

I’d love to see Reid leave the offense on the field more often in short fourth-down situations. I’d love to see him allow Alex Smith to use his legs more in those sorts of situations (why didn’t the Chiefs call a read-option or bootleg on any of the four downs on the goal line?). But unless Reid gets a significant paradigm shift, Chiefs fans will probably have to deal with him being more conservative than he should be.

The measurements I listed above are all based in statistics. There are, of course, some things that statistics can’t measure - the "intangibles" like locker room chemistry. You may like Andy Reid more or less because of certain intangibles. I really don’t know. No one does. That’s why they’re called intangibles.

The last 2,000 words or so (did you really stick with me through 2,000 words? You’re the best) aren’t really there to convince you to love or hate Andy Reid. It’s more to provide context for the decisions that he makes over the course of a game that may make you want to tear your hair out.

For example, we know that he’s pretty good at making good challenges, so if he does / doesn’t weakly toss the red flag to the ground after holding it in his hand and walking up to an official, you can be fairly confident that he’s made the right decision.

How confident are you in Andy Reid's ability to make important in-game decisions?