The Kansas City Chiefs dropped their second of three preseason games in a 30-5 loss to the Minnesota Vikings on Saturday night in a game highlighted by the return of former Chiefs QB Matt Cassel. The Chiefs starting offense played into the second half but they produced no touchdowns in a disappointing night.

Share All sharing options for: Vikings-Chiefs final score: KC's o-line one of several problems in 30-12 loss

Alex Smith had two interceptions on the evening. Even worse, two red zone interceptions. He hasn't thrown two picks since Week 4 last year against the Giants. Vikings DB Captain Munnerlynn stepped in front of a Smith pass, which was intended target was Frankie Hammond, who was in single coverage. Smith then looked for Kelce but was picked off in the red zone again. 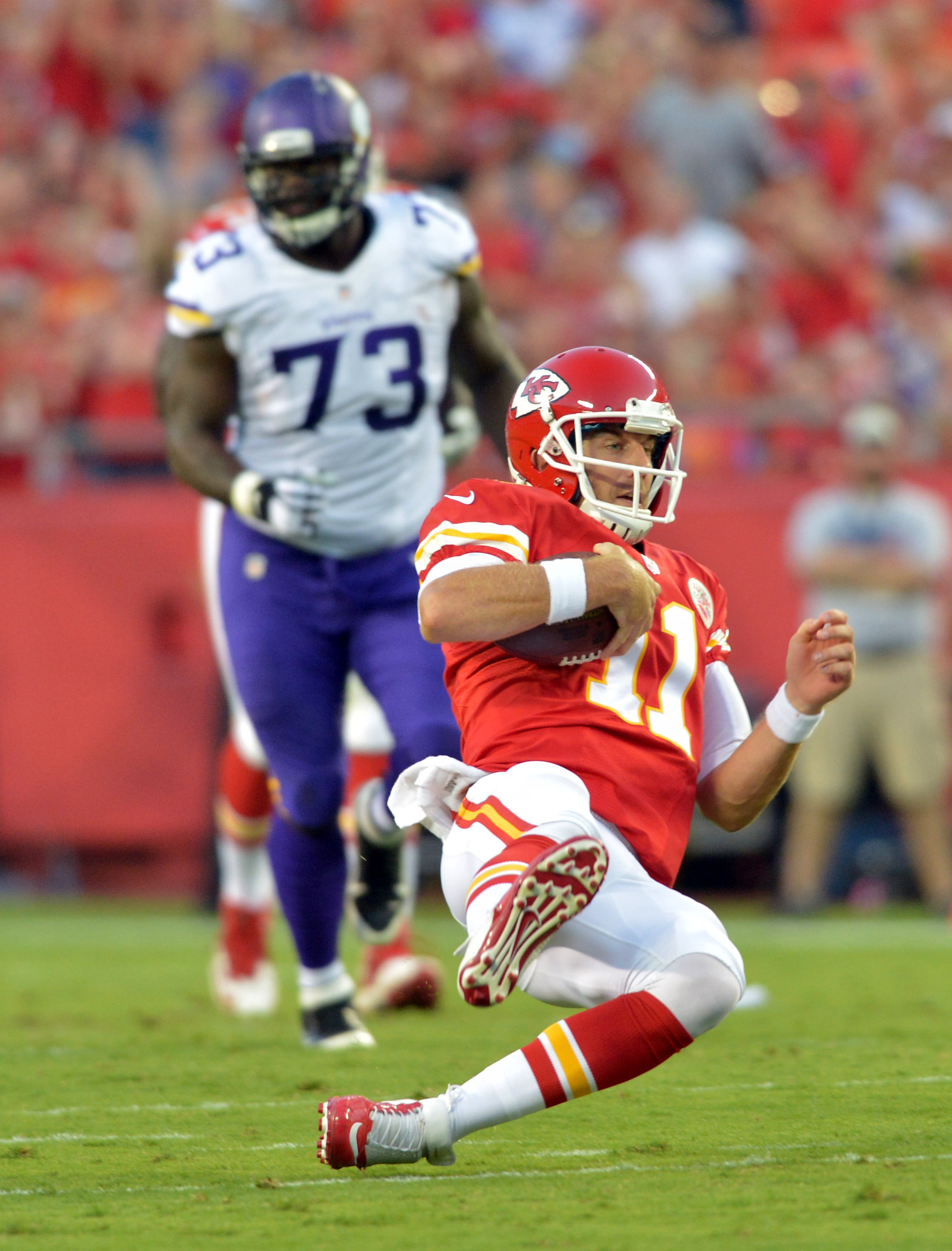 The Chiefs offensive line was troublesome all night long. RT Jeff Allen and RG Zach Fulton had a few plays where there was clear miscommunication and a rusher came through unblocked. That's bound to happen with Allen playing in a new position there. Still, it needs to be corrected.

The Chiefs were disappointed in their screen game last week but got it started off nicely with a 16-yard screen to Knile Davis, who started the game in place of Jamaal Charles. Charles dressed but did not play in the game.

Ryan Harris was the first man up to replace Jeff Allen at right tackle while the rest of the starters stayed in for an extra series.

Vikings perspective of the game

Vikings perspective of the game The aftermath

De'Anthony Thomas saw more snaps with the first team offense in this game than he has.

Why you throw deep: to get a penalty! The Chiefs picked up a 42-yard pass interference call when Smith went deep to Donnie Avery. That's a benefit of going deep.

RB Joe McKnight saw some action for the first time this preseason. Nick Jacobs has him making it on his Chiefs 53-man roster prediction. He was hurt for part of camp.

Tyler Bray threw an interception on his first drive. Kyle Williams was the target but the ball was way short. Easy interception for the Vikings, who returned it inside the 10-yard line.

On the Vikings first drive, Matt Cassel moved around in the pocket and found his running back (the guy replacing Adrian Peterson) in the flat. He took it 31 yards for a big gain against the Chiefs.

Matt Cassel threw a 53-yard touchdown to Cordarrelle Patterson. It looked like Daniel Sorensen was trailing in coverage. The Vikings went 97 yards in five plays against the Chiefs. Ouch, that one hurts. See video of the play here.

Great two-play sequence for the Chiefs: 1.) Derrick Johnson shoots through the line to force a tackle for loss inside the 5-yard line. 2.) Jaye Howard rushed Cassel, who fumbled the ball out of the end zone for a safety. 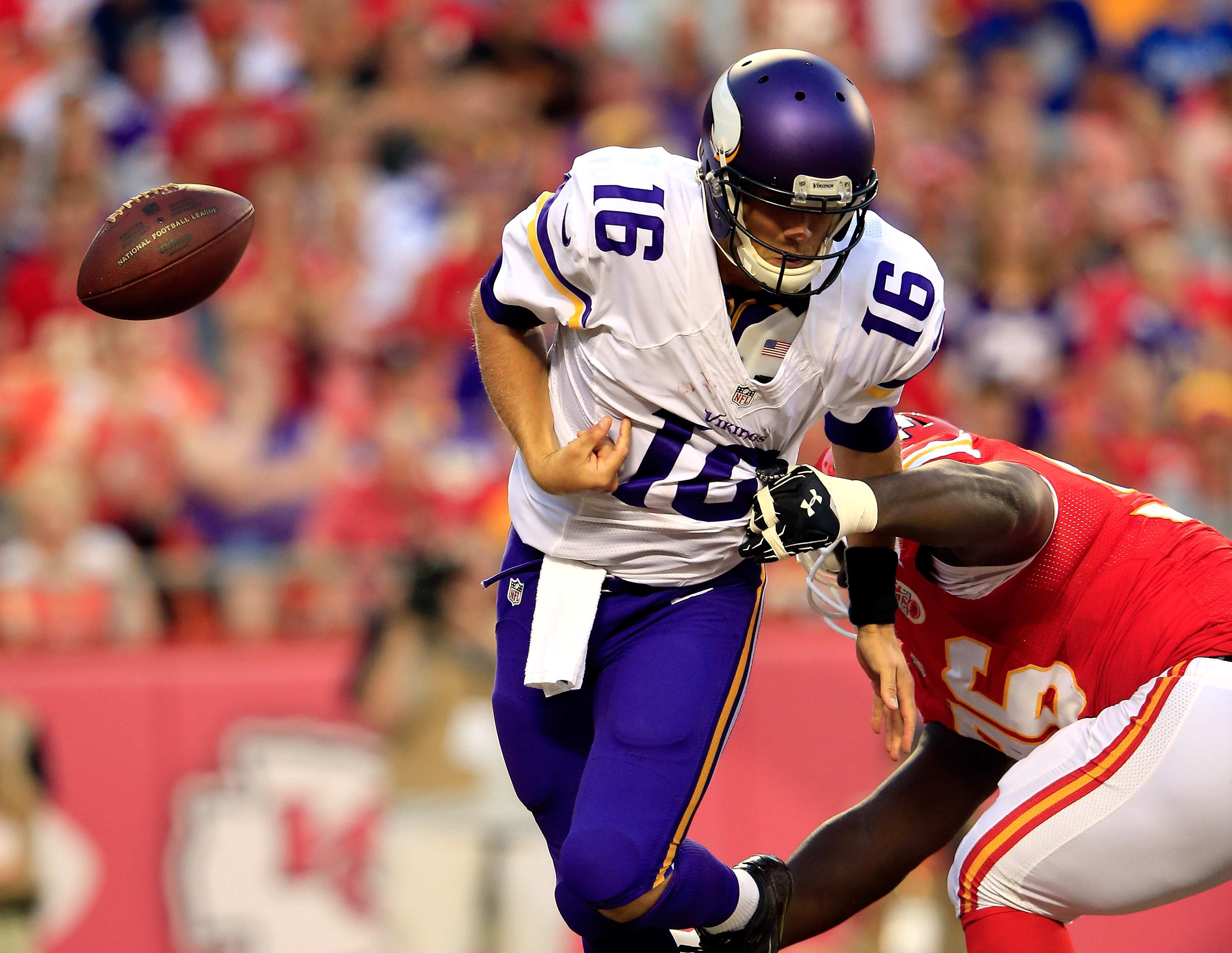 Tamba Hali had a great dip and got around the tackle for the sack. Justin Houston got to him right at the same time. Pretty much exactly the way you want your pass rushers to work -- meet at the quarterback!

Derrick Johnson had a sack in the game, coming up the middle and followed closely by Tamba Hali.

The Chiefs rotated their cornerbacks too with Ron Parker, Sean Smith and Marcus Cooper all seeing time.

Ron Parker almost had a pick when diving for a ball thrown by Cassel but couldn't hang onto the pass. He got the best of him Cassel a plays later when he caught a great over the shoulder interception. 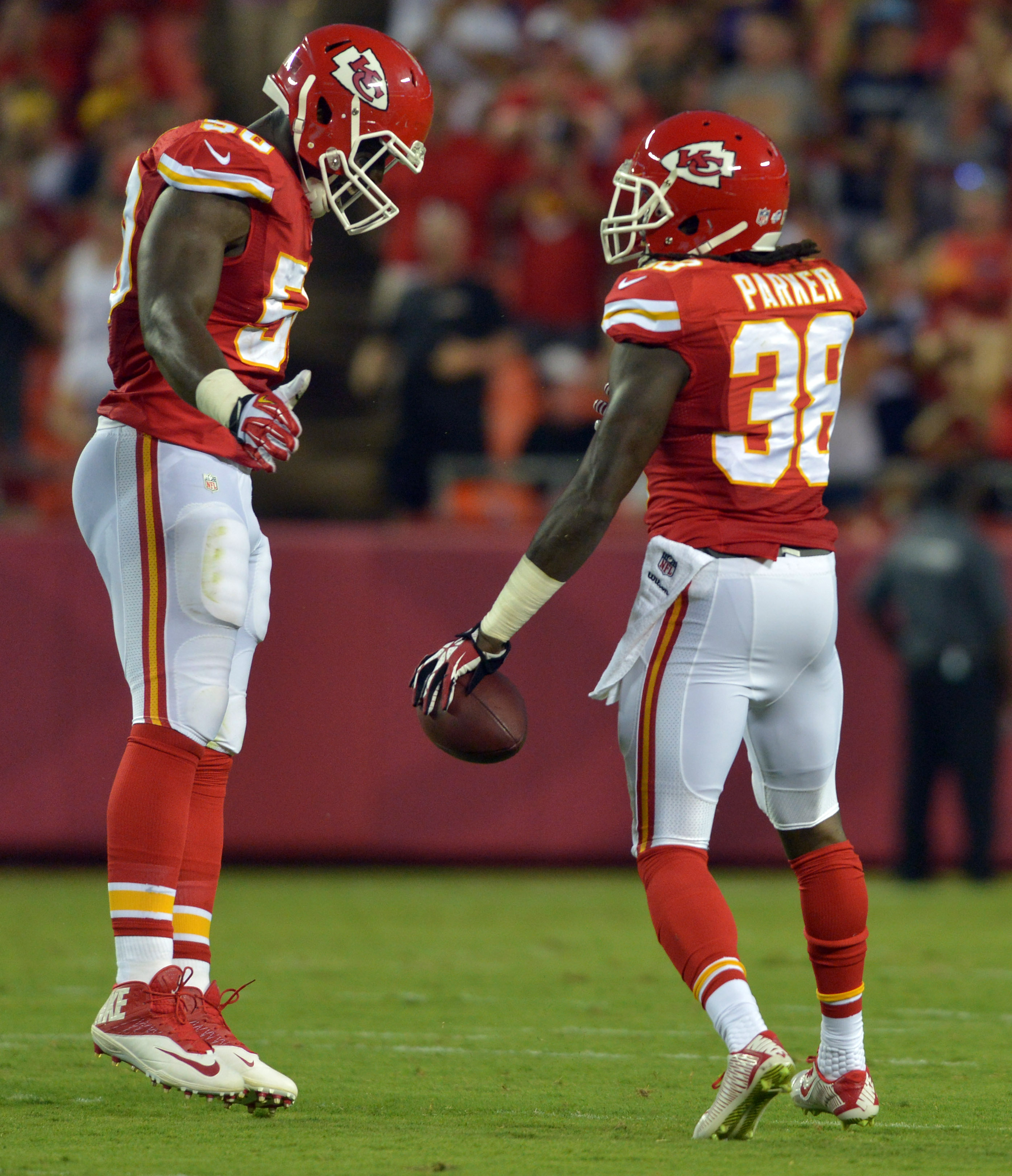 Dustin Colquitt's first punt was an absolute beauty as the ball had a Chiefs bounce inside the 5-yard line before it was downed at the 3-yard line.

Knile Davis took the first two kick returns; De'Anthony Thomas took the third one. DAT is the punt returner, too.

Kyle Williams was back deep on the first punt return of the second half.

Joe McKnight had a kick return in the second half as did Albert Wilson.

The Chiefs gave up a 75-yard punt return. Credit Knile Davis for hustling down the field and pushing him out at the 5-yard line.

The Chiefs attempted an onside kick at the end of the game but they couldn't recover.

On the bright side...

The Chiefs first team had no penalties. The entire team had just two. This is significant because they had 13 penalties in last week's game against the Panthers.

Matt Cassel was not booed

Maybe fans didn't notice? But there was nothing when he came onto the field.

This #Chiefs game has been dog-ugly, but ya gotta love Arrowhead at night. pic.twitter.com/mhO97YSPYY