Film study: Is Donald Stephenson ready to be the Chiefs starting right tackle?

With Stephenson taking on a starting role, it is time we look at what will make him either succeed or fail.

Share All sharing options for: Film study: Is Donald Stephenson ready to be the Chiefs starting right tackle?

One of the biggest storylines for the Kansas City Chiefs going into the 2014 season is the reshuffled offensive line. With starters Branden Albert and Geoff Schwartz departed, and Jon Asamoah off to the Atlanta Falcons, the Chiefs find themselves with a very different look up front.

Eric Fisher is sliding over from right tackle to the left side, with Donald Stephenson taking over a full-time role at Fisher's old haunt. On the interior, Jeff Allen and Rodney Hudson are holding down left guard and center respectively, while a battle for right guard rages on.

Related: Did the Chiefs o-line improve?

For this feature, we will study Stephenson. For a little background, Stephenson was taken in the third round of the 2012 out of the University of Oklahoma. Stephenson has started seven games in each of his first two regular seasons, and got a taste of the playoffs against the Indianapolis Colts last year, filling in for Fisher.

I decided to break down the playoff game because it shows me the most about Stephenson in a big moment. Anybody can play well in some throwaway game versus the Oakland Raiders, but I wanted to see this kid in the biggest battle of his football life.

If anything stands out on tape more than other traits, it is his nimble feet.

Without further introduction, here are the findings with pictures and charts to boot.

Note: You can zoom in on pictures by clicking on them.

In this game, the Chiefs called 51 pass plays with Stephenson was on the field for 48 of them. Of the three he was not on the field for included the turning point of the afternoon, a strip-sack of the scrambling Alex Smith. On that play, Asamoah was at right guard, with Schwartz at right tackle.

Of the 48 passing plays Stephenson was involved in, I charted the downs and distance for each occasion. This is my system:

Here is how it breaks down:

The Chiefs did a great job on first down in this game, making it tough for the Colts to pin their ears back and rush Smith. Still, Indianapolis brought different blitz packages throughout the game, trying to use defensive backs like LaRon Landry and Antoine Bethea to shoot gaps.

With the success on first down, Stephenson had the advantage of the Colts being off-balance mentally. This is something that needs to be factored in, especially when dealing with the speed of players like Robert Mathis. To be fair, it should also be noted Jamaal Charles was out after the first drive, likely making Indianapolis expect a pass more often than not in a 50/50 situation.

On this day, the Colts threw a bunch of different looks at Stephenson. Very rarely did the same player line up against him on consecutive plays, giving the second-year man various types of size, speed and quickness to defend.

Here is how his one-on-one opponent breakdown looks:

As you can see, Stephenson dealt with seven different rushers without help from Schwartz or a tight end/running back. Stephenson was left on an island, with the line almost always pinching in toward the middle. Albert was also left to his own devices on the outside, seldom requiring help.

One of the most impressive pieces of the film was watching Stephenson deal with the speed-rush of Mathis. A possible candidate for the Hall of Fame when he retires, Mathis has long been known for the ability to dip his hips and rip past the outside shoulder of an overmatched tackle, especially at home with the crowd noise giving him a jump off the line of scrimmage.

Stephenson was generally able to neutralize him, giving up only three pressures. Of those times, Mathis never came overly close to sacking Smith, but was able to make him move his feet.

Let's have a look at Stephenson lined up against Mathis on the Donnie Avery touchdown: 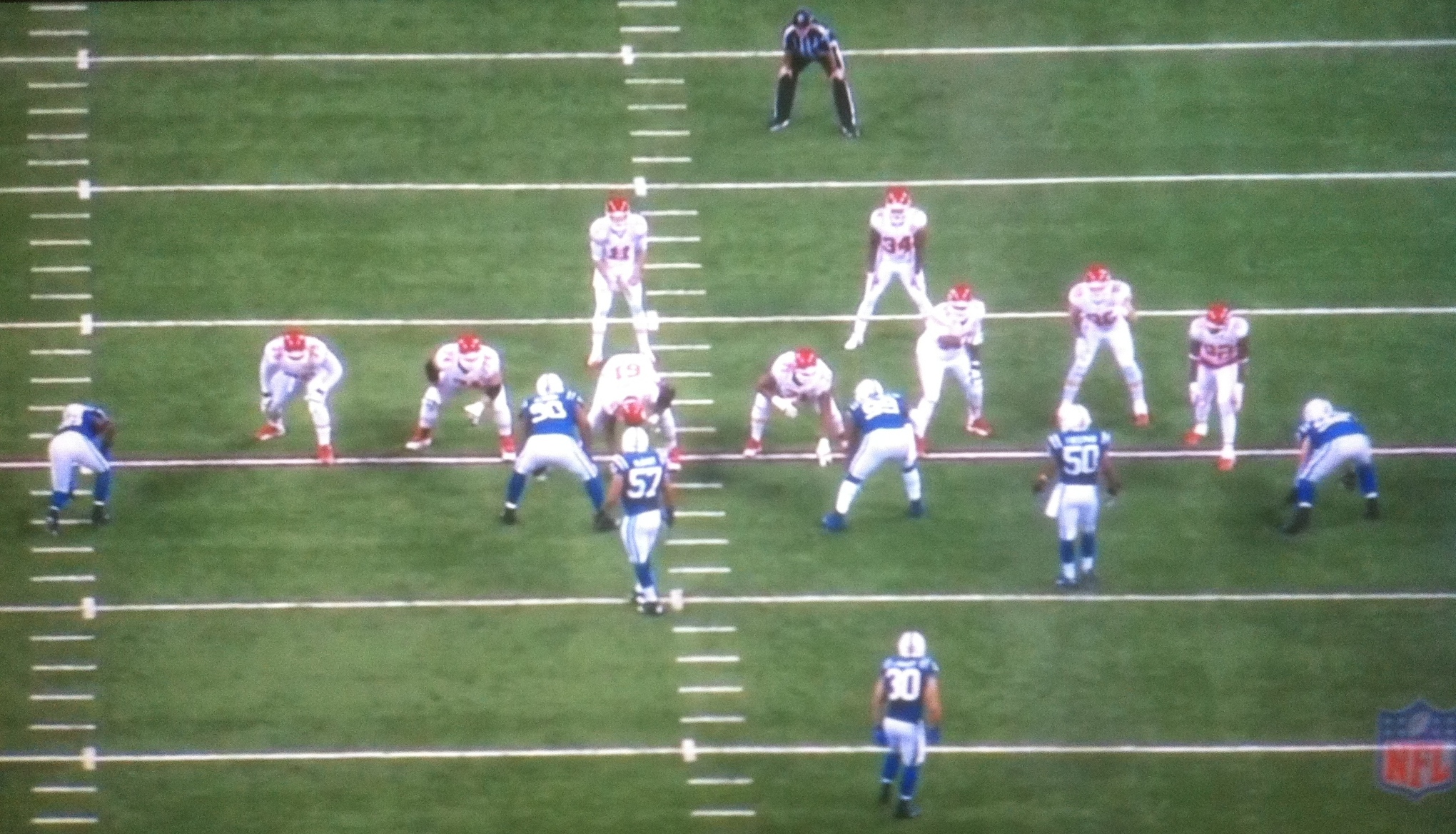 Stephenson is lined up on the left side of the picture, opposite of Mathis. As you can see, he has no help behind him. The Colts are showing a line box on this play, since it is 3rd and 10. 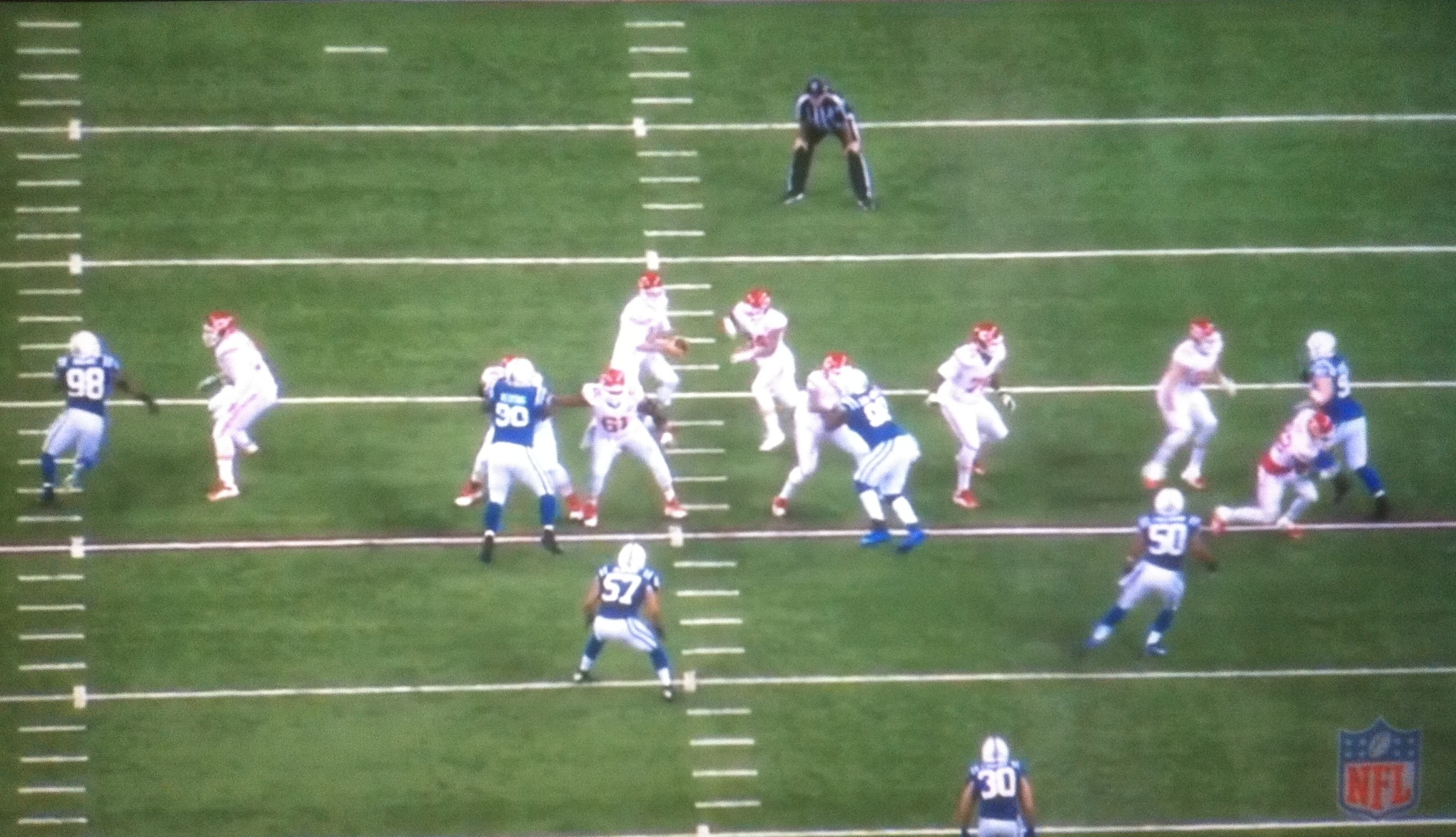 Mathis is going for the speed rush, and is about to sink his hips and head for Smith. Stephenson has good bend in his knees but even more importantly, a wide base created by a good shuffle. If anything stands out on tape more than other traits, it is his nimble feet. 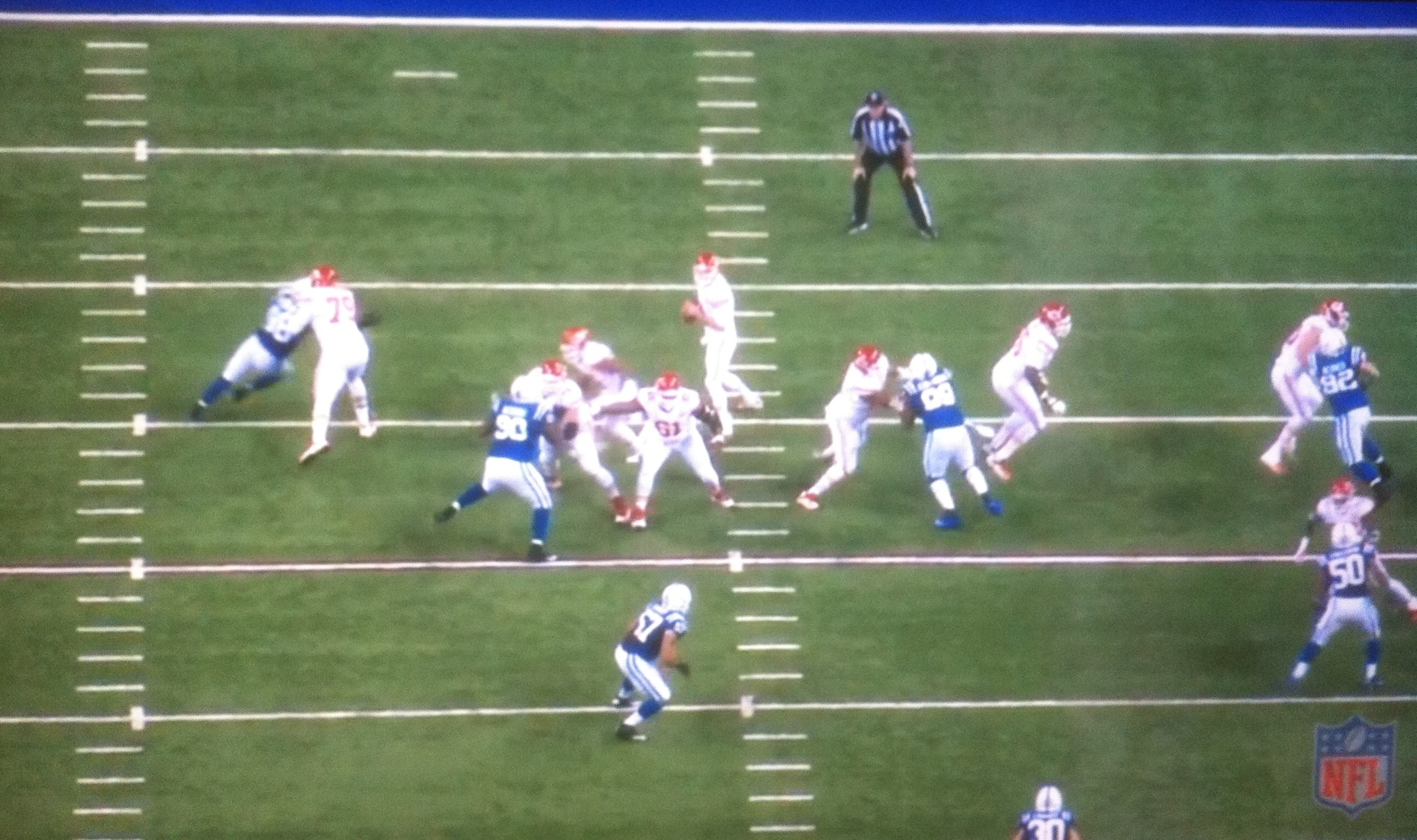 Here, it appears Mathis has Stephenson beat. Look at the angle of Mathis' body, it is 45 degrees. Stephenson gets caught lunging instead of keeping that low base. In short, it doesn't look good. 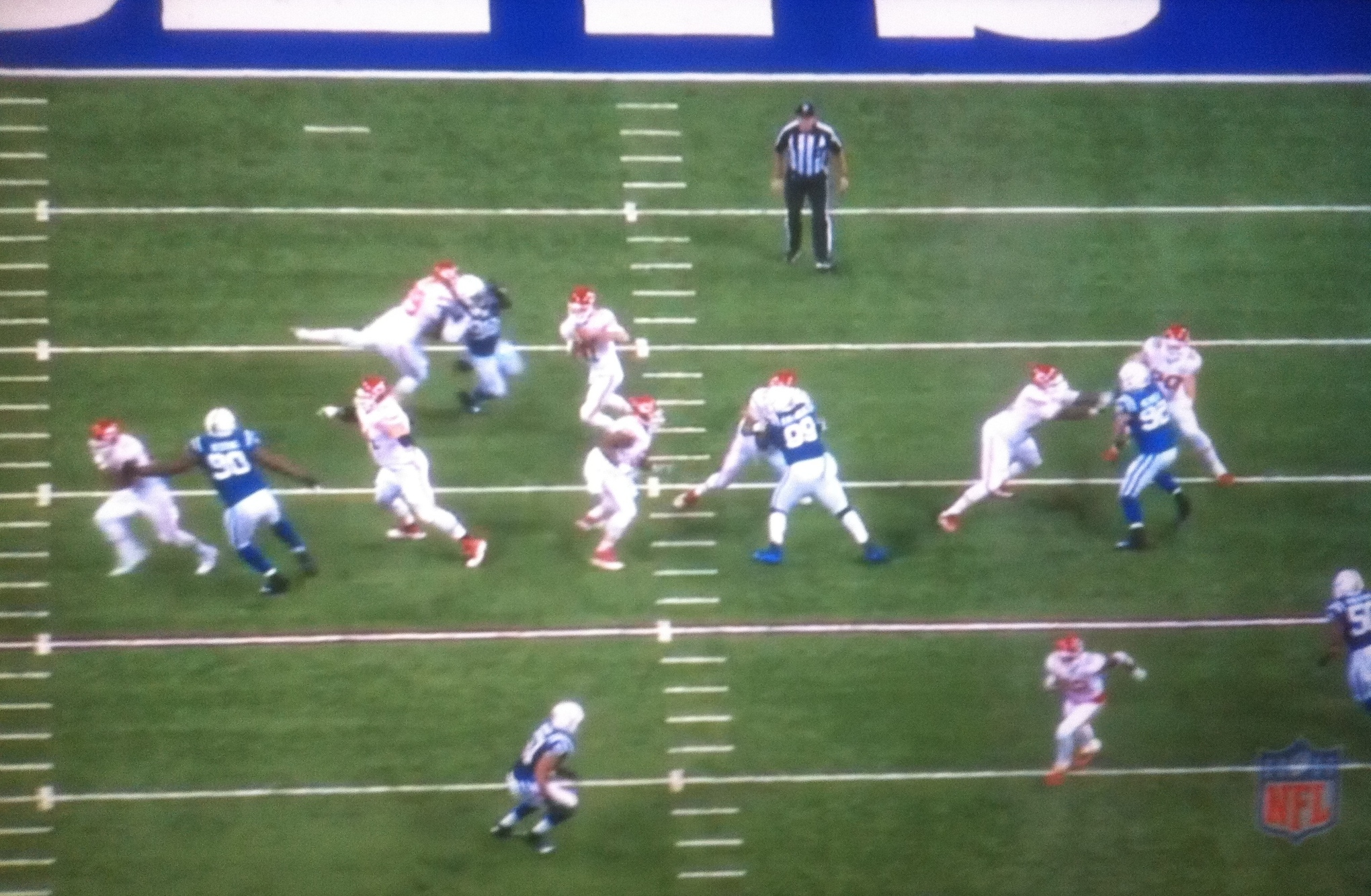 Yet Stephenson recovers. In the frame, it appears to be a holding call in the making, but I promise from the overhead view it is clear there is no foul. Stephenson is pushing Mathis hard across the pocket, clearing space for Smith to step up and throw the bomb. Sometimes, there is no better attribute than raw strength. Mathis ends up out of the play and the Chiefs end up with seven points.

Here is a play that shows the brute strength of Stephenson: 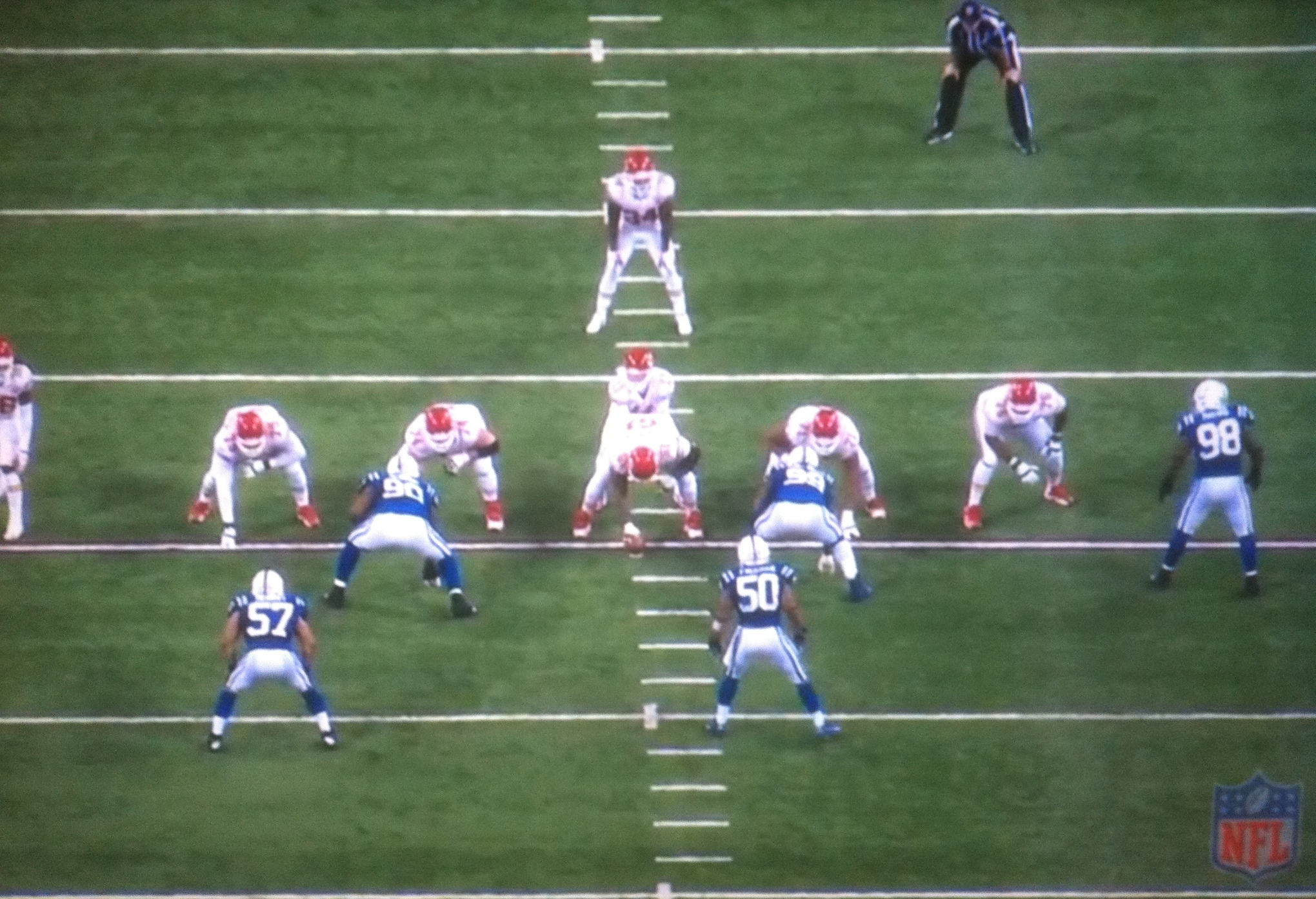 Redding is lined up between Schwartz and Stephenson on the left side of this picture. Redding is going to crash toward Stephenson while Schwartz looks to keep any blitzing linebacker at bay. 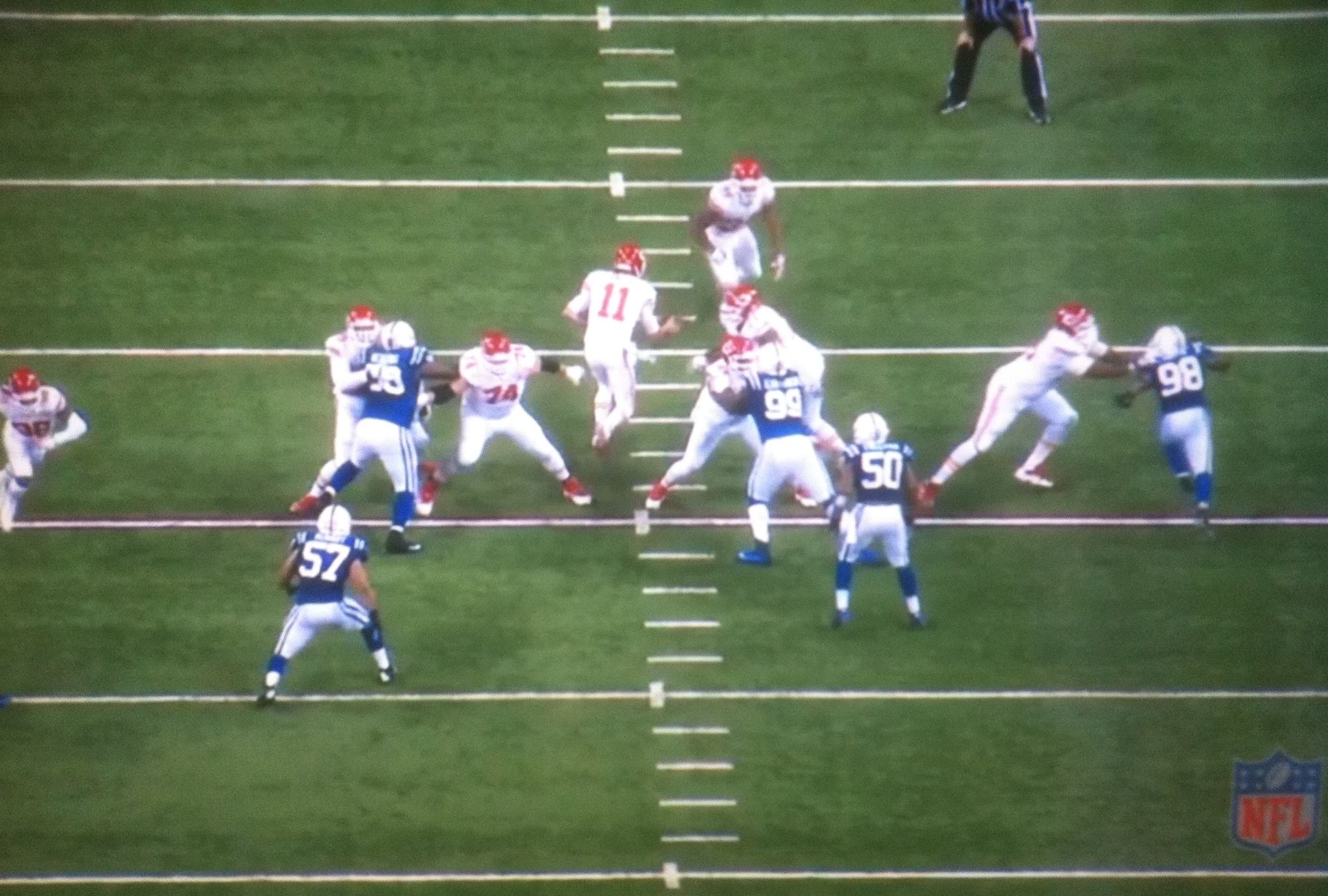 Redding tries to split Schwartz and Stephenson but it doesn't work. Stephenson slides over and gets his left hand deep in Redding's chest. With the inside closed off by solid technique, Redding is forced to counter. 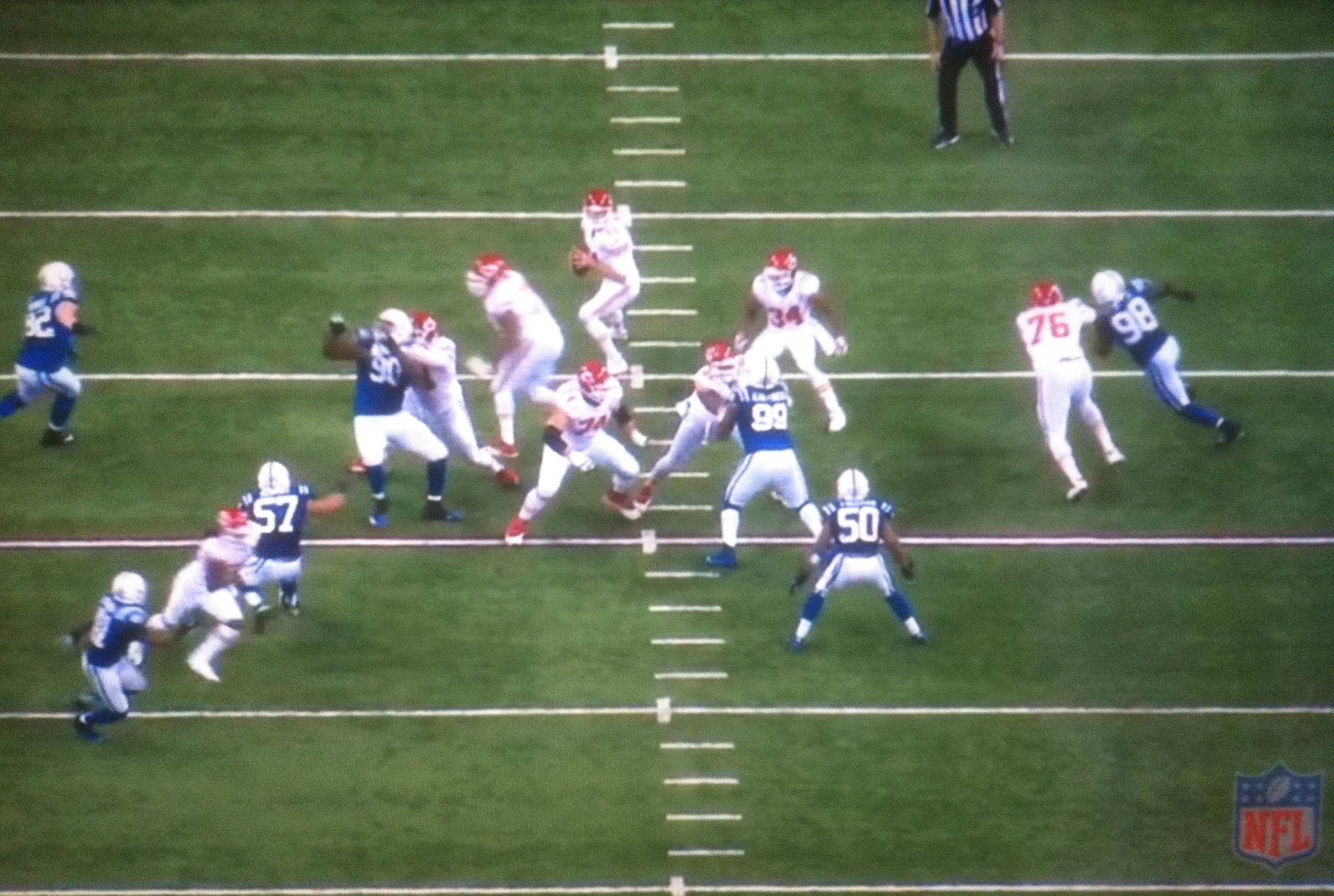 Redding tries a quick spin move to the outside, hoping for a lane to Smith. Instead, Stephenson is waiting for it and gets low, driving Redding completely out of the play. 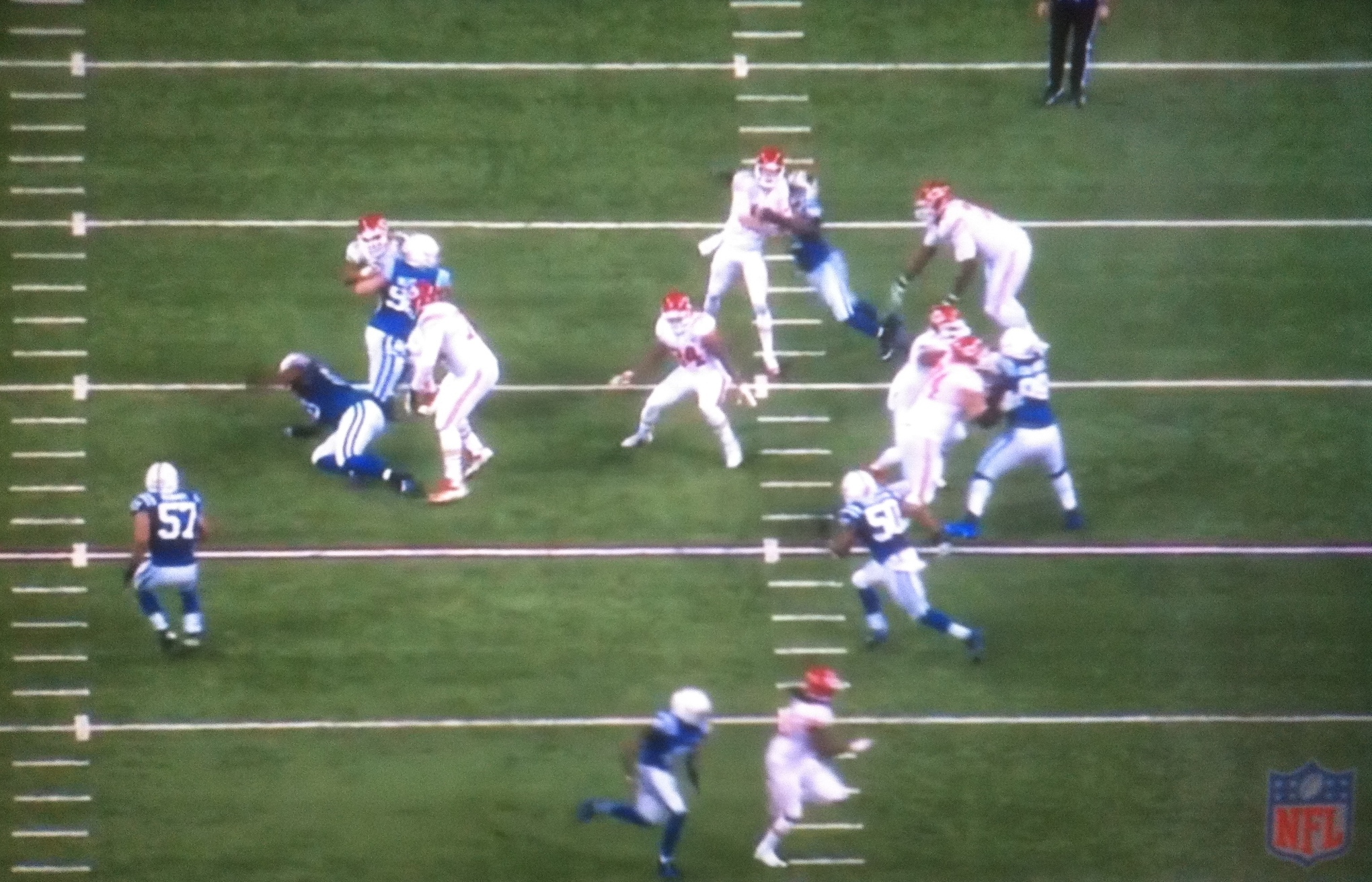 The result: Stephenson literally throwing Redding to the ground.

With the good, also comes the bad. Stephenson has elite feet and shows excellent power as displayed above. All that said, he needs to be more consistent with his upper half. At times, Stephenson can get way too high with his initial punches, hitting along the top of the shoulder pads instead of in the chest.

Here is an example of that, with a positive at the end: 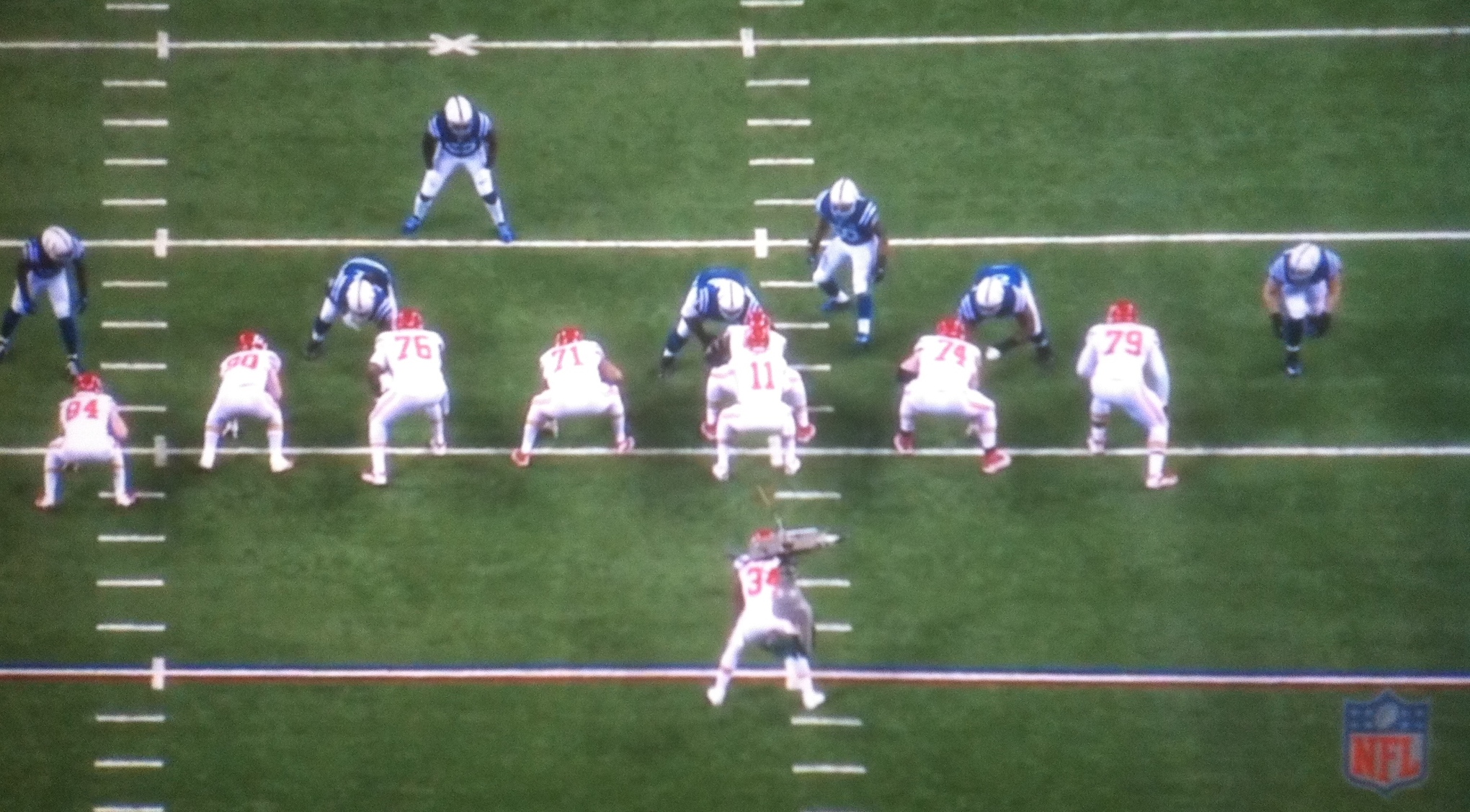 Here we see Stephenson on the right edge going against Werner, a first-round pick from 2013's draft. Watch in the next frame for Stephenson's hand placement. 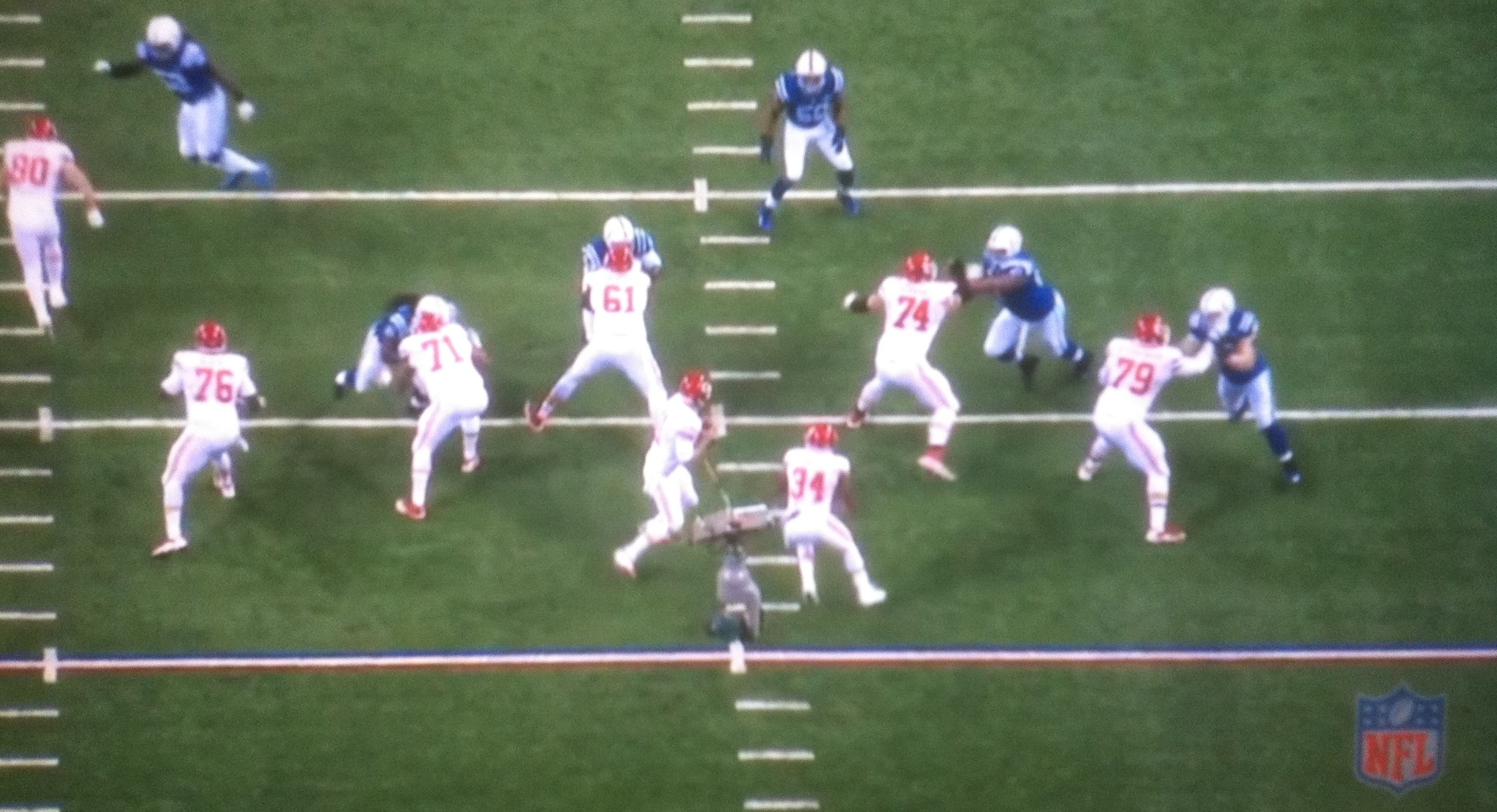 Stephenson hits Werner along the shoulder/helmet. Beyond that, he does not have a good bend in the knees or hips. Against a more experienced player, this probably spells a pressure on Smith, at minimum. Stephenson has to be more sound in this area. 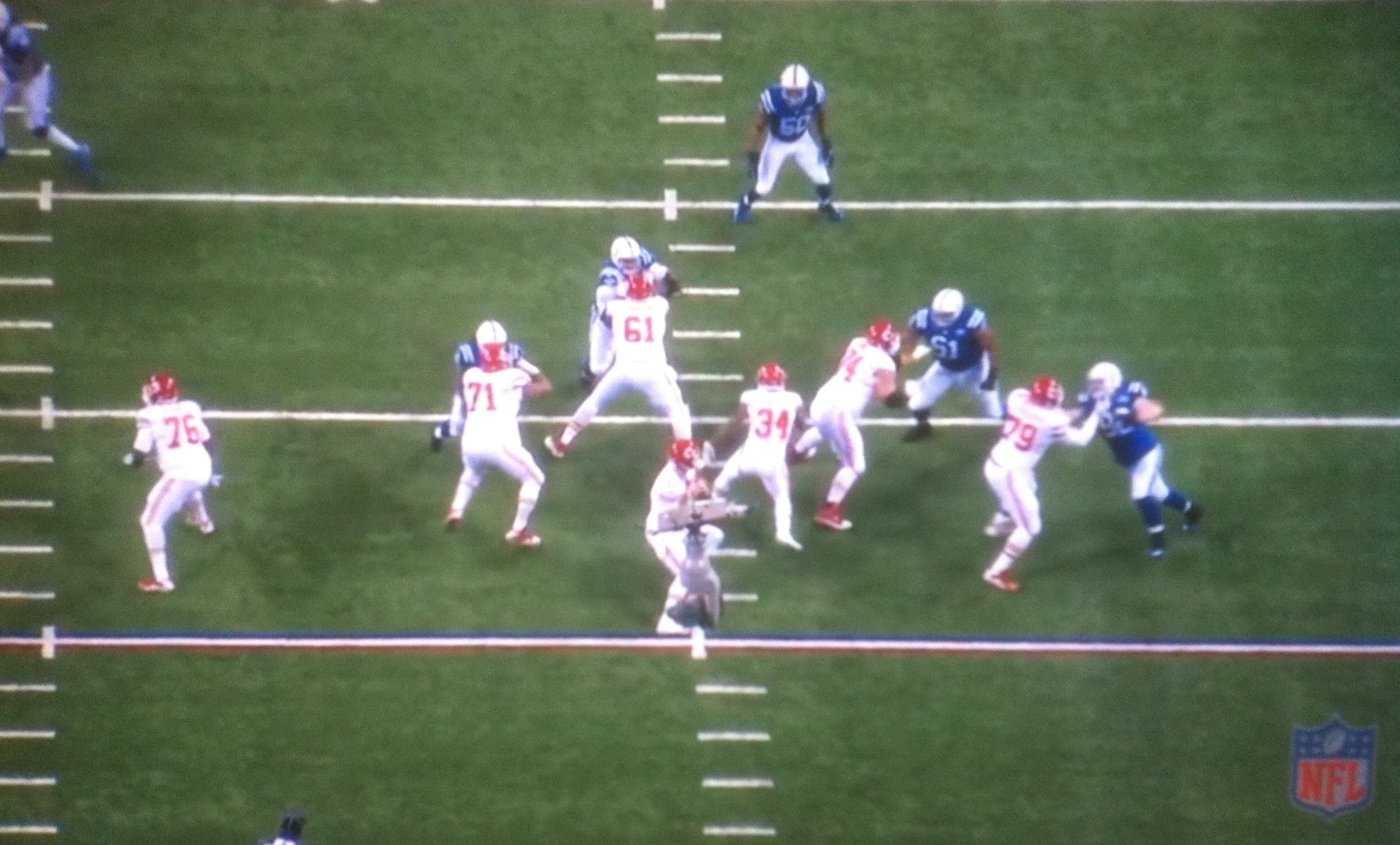 As you can see, Stephenson is still too high and being driven towards Smith. Stephenson is stronger than Werner, but has poor leverage and is giving up his muscle because of it. 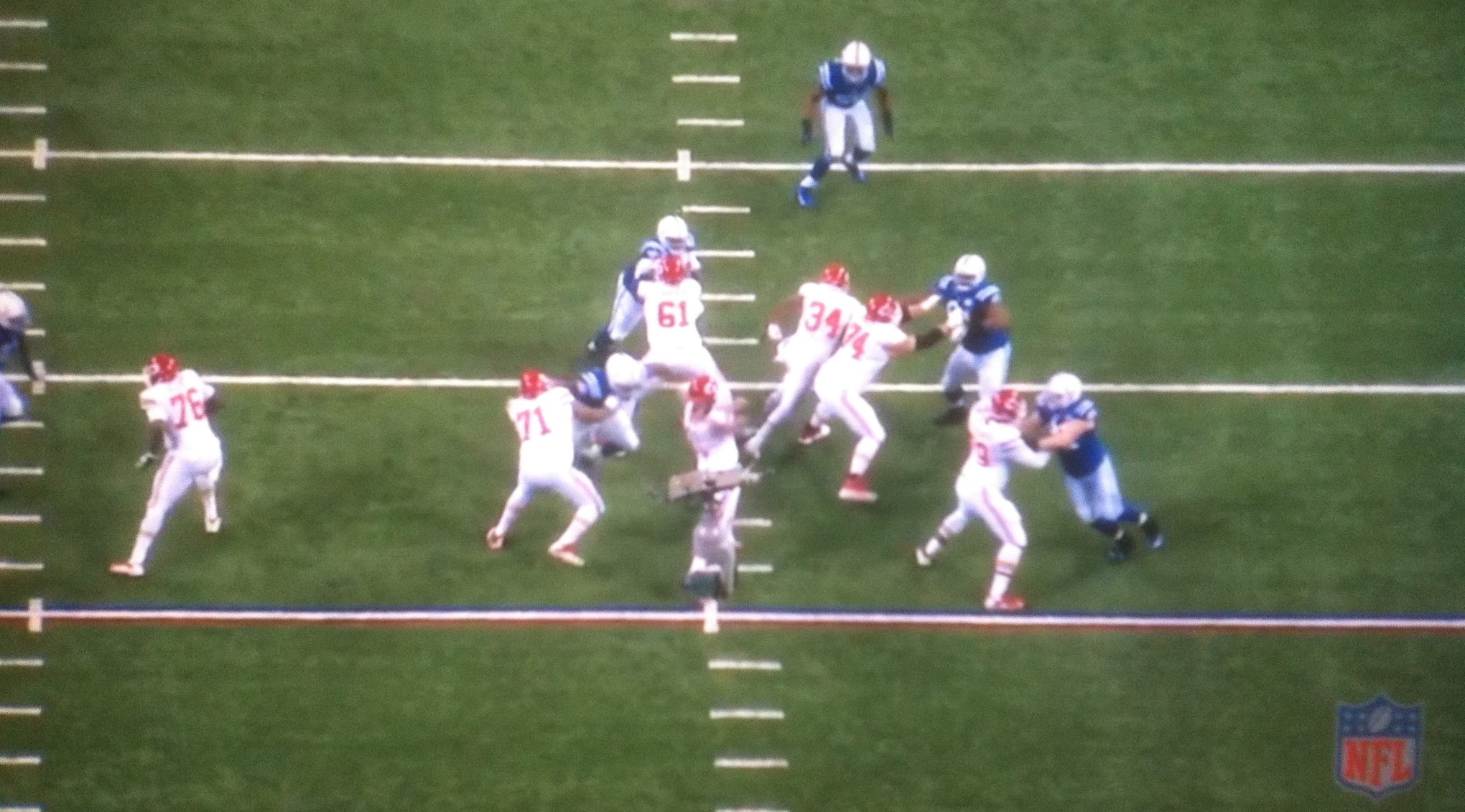 Here is the saving grace on the play; Stephenson's ability to reset his base. Stephenson does a great job of setting his feet and stopping Werner's push. With Smith set to throw, he is not being affected by Werner's presence. The good lower-body technique of Stephenson saved the day here.

Stephenson still needs to work on his upper-body technique, but overall he shows great potential. I expected to see Mathis really handle him with the speed move to the outside, but he gave very little ground. Despite getting no help from a tight end or running back, Stephenson only allowed one hit and no sacks on Smith all afternoon.

The youngster is clearly very strong and has the ability to slide and shuffle, as well as drive. Not too many players at 6'6 and 312 pounds have the kind of quickness that Stephenson displays on film. He has all the tools to be a very effective tackle on either side of the line as a starter.