Who are the KC Chiefs locks and bubble players at linebacker? Nick Jacobs (@Jacobs71) gives his take as we await the start of training camp.

The locks and bubbles series looks at a position that featured three players in the NFL's Top 100. Tamba Hali, Justin Houston and Derrick Johnson were recognized by their peers as some of the best in the game. The position looks like a strength this fall.

Locks to make the roster

Justin Houston: Houston may not have the second contract he desires but his play will force that change. He has minor tweaks in his pass rush to improve upon but Houston is near the top of his game. He has the ability to hit an offensive lineman with multiple pass rush moves and do it effectively. He has the speed to beat a tackle with an edge rush or cut underneath them after forcing them out wide. The Georgia alumnus has grown by leaps and bounds since he was a 2011 third round pick. Houston has become a complete player that can take on double teams and win. He sets the edge better than most linebackers in the game. Teams cannot effectively run Houston's way when he is at full strength. He is a franchise cornerstone.

Dee Ford: Ford stepped onto the scene and quickly showed why the Chiefs drafted him. He has quickness around the edge. Ford's first step is a nice advantage for him. Joe Mays compared him to Von Miller. Tamba Hali compared his first step to Derrick Thomas. Ford acknowledged that he hasn't done a thing yet. Ford said he wants to get sacks when the game is on the line. The Alabama native also plays the piano. That may not seem like a big deal but if you've ever attempted to play piano, you need incredible mental toughness to survive that challenge. Ford will likely provide a rotational pass rush early on in his career while he learns the game.

Once Dee Ford was drafted, Tamba took him under his wing. That spoke volumes about Tamba.
Derrick Johnson: DJ has survived five coaching changes and three general managers in Kansas City. He is tied with Dustin Colquitt as the longest tenured Chief entering season No. 10. The reason he's been able to survive is because of his athletic ability. Johnson told the media during spring practices he tries to lose a couple of pounds each season to maintain his quickness. He had one of his better seasons last year, as Dontari Poe and Mike DeVito were able to keep blockers off of him. He has shown no signs of slowing down this season.

Joe Mays: Mays was a breath of fresh air at spring practices as a vocal leader during drills. He led by example by giving consistent effort in his approach to each activity. Mays showed an upgrade over Akeem Jordan in coverage. He is a physical presence as a run stopper.

Tamba Hali: Hali did an impressive thing this spring. Once Dee Ford was drafted, he took him under his wing. That spoke volumes about Tamba Hali. He understands that his football career is nearing an end but he still wants to help the team get better long term. It may cost him his job but he still wants to help. Hali is a tireless worker, watching tape and working out or working on his craft in some capacity. Hali's biggest challenge is attempting to use a combination of pass rushing moves. He typically stays with the smack, dip and rip while bending around the corner but tackles get used to that after a couple of series. Hali needs to become unpredictable with tackles. If he can keep the tackles guessing, his sack number could be on the rise this season. 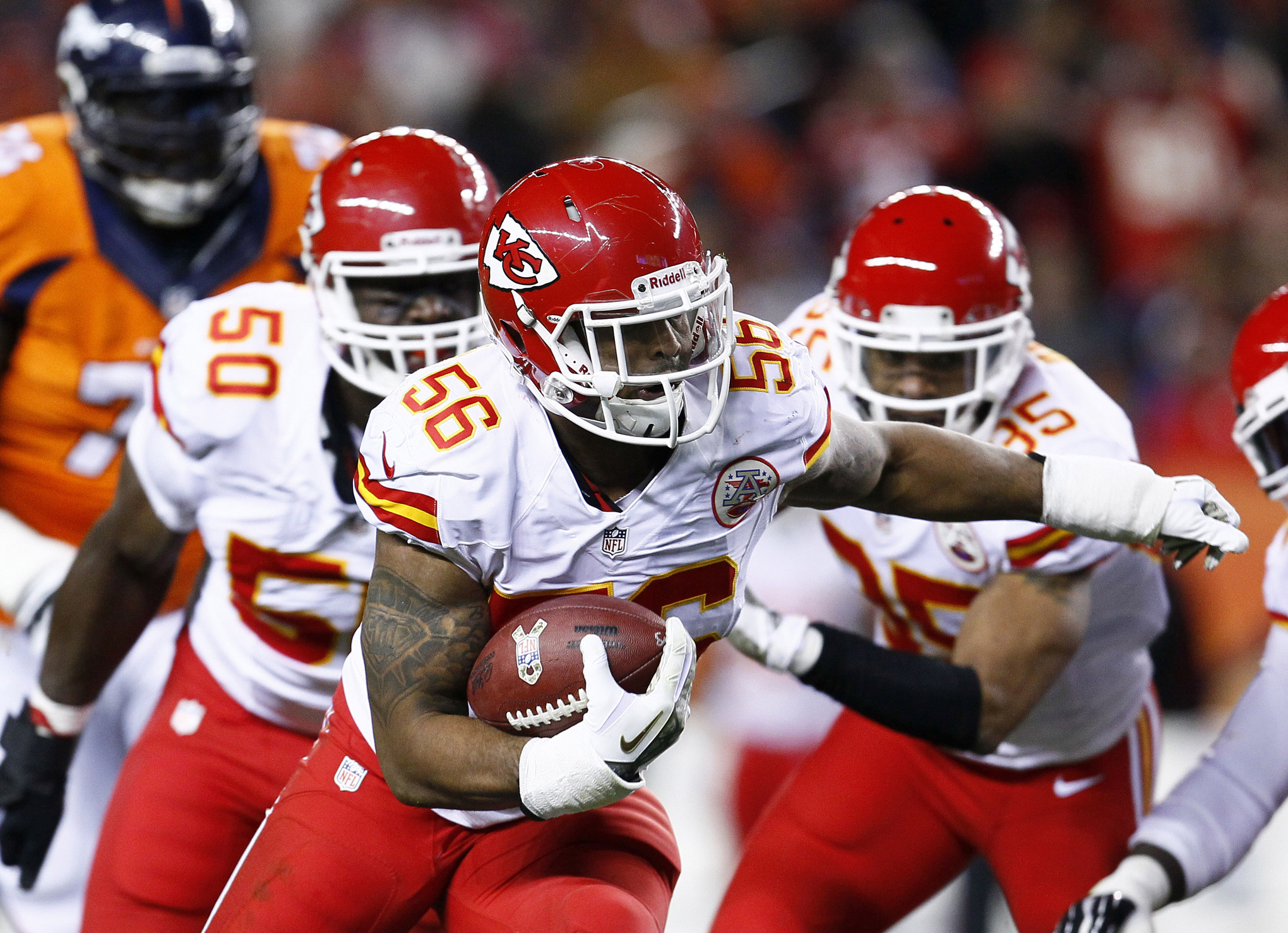 Frank Zombo: Zombo is good depth in the pass rush and a good special teams contributor. He performed well in place of Hali and Houston last season. Zombo may not have the athletic ability of Hali, Houston or Ford but he provides serviceable depth and is a solid fourth pass rusher.

Josh Martin: Martin took strides forward last season as he found his way on the active roster. He had some crucial blocks in returns late last season. He was just raw last season in his ability to execute and his overall strength.

DeRon Furr: The converted safety shows a lot of promise. Furr looks a lot like Derrick Johnson on the field. They are similar in their athletic ability and how they drop into coverage. He will be one of the players to watch in training camp.

Nico Johnson: Johnson has the deck stacked against him. He struggled to get on the field last season and looked lost at times on tape. The organization brought in competition to push him or replace him. Johnson will need to respond or he will be looking for a new team after training camp.  The Chiefs clearly didn't feel comfortable with Johnson's progression; otherwise they wouldn't have signed Joe Mays.

Dezman Moses: Moses showed a big drop off between his ability and the starters above him. Moses doesn't have the same pass rush ability as either. He is getting buried on the depth chart and needs to respond big in training camp.

Alonzo Highsmith: He has a lot of competition in front of him.

Ben Johnson: The undrafted free agent is fighting for a chance to be put on the practice squad.

The linebacker corps is the strongest it's been in Kansas City since they switched the 3-4 system in 2009. There looks to be solid depth across the board. This position group has a bigger impact on special teams compared to most so solid depth is crucial in helping the special teams reach peak performance in all phases.