Few players are more underrated across the NFL than the Chiefs' fullback.

On May 1 of last year, general manager John Dorsey made his second trade as the general manager of the Kansas City Chiefs. Dorsey sent slot cornerback Javier Arenas to the Arizona Cardinals, bringing in fullback Anthony Sherman.

The reaction to that trade around these parts? Bewilderment. Most, including myself at the moment, could not understand how the Chiefs could deal a young corner for a fullback. One, the position is a dying breed and two, aren't they a dime a dozen?

As it turns out, Dorsey fleeced the Cardinals. Sherman became the best fullback in the NFL last season, according to Pro Football Focus. The third-year pro out of UConn was simply a blocking machine, providing Jamaal Charles and the other backs with a head-smashing escort throughout the season.

Sherman even provided a safety valve for Alex Smith, catching 18 passes for 155 yards and his first career touchdown in 2013.

As it turns out, Dorsey fleeced the Cardinals. Sherman became the best fullback in the NFL last season.

For this film study, I decided to take a look at Sherman in his element; blocking in the run game. I chose to review tape of Week 3 against the Philadelphia Eagles because it was a game where the Chiefs ran 25 times against a top-10 run defense (10th in rush yards allowed, fourth in rushing yards allowed per play).

Let's start with the basics. On this night, Kansas City won 26-16, running its record to 3-0. In the game, the Chiefs called 25 running plays, with Sherman on the field for 20 of them.

Here is how the carries and yardage break down with Sherman on the field:

Here is the same chart, but this time without Sherman on the field

While it is a small sample size, this shows how valuable Sherman was while on the field in the running game. Despite the Eagles stacking the box often throughout the game and knowing a run was likely coming with Sherman on the field, the Chiefs still ran over Philadelphia.

Sherman consistently got his pads low and drove would-be tacklers out of the way. Below is an example of why Sherman was so dominant in this contest against a good front seven: 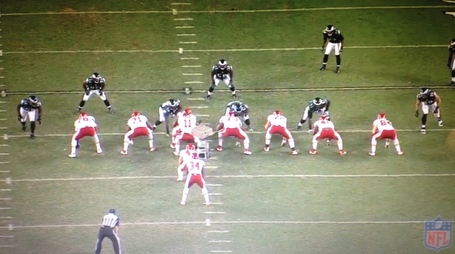 Here we have the Chiefs in the I formation with the right side strong. Kansas City has called an inside run with the play going between Branden Albert and Jeff Allen. 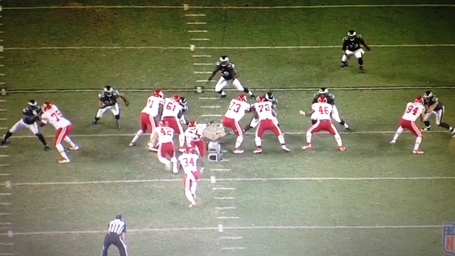 From the start, the play unfolds quickly. Albert kicks the outside linebacker out, with Allen and Rodney Hudson double-teaming the defensive tackle. Sherman hits the hole ahead of Knile Davis, ready to meet Eagles linebacker Mychal Kendricks. 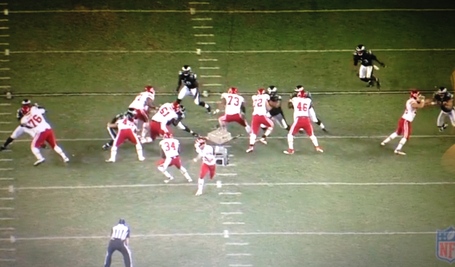 Sherman absolutely folds Kendricks up. Look at how Sherman gets low and gets into the chest of the linebacker. Kendricks is driven two steps back and loses all momentum. 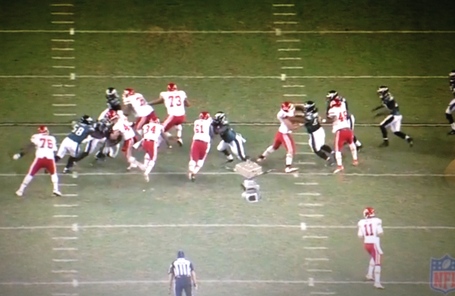 Sherman clears by pushing Kendricks all the way to the left side of the hole. Davis follows directly behind Sherman and explodes of Sherman's right hip for a seven-yard gain.

Throughout the night, Sherman blasted a multitude of different people. Only once did Sherman semi-whiff on the block, and frankly it was poor running by Davis that caused it. The former Huskies star was the picture of consistency.

Here is who Sherman locked his sights on against Philadelphia:

Only once (the aforementioned semi-whiff) did a player Sherman was blocking lay a hand on the ballcarrier. Sherman not only picked up the initial block, but drove his man for seconds at a time.

Below is a perfect example of Sherman's effort and strength: 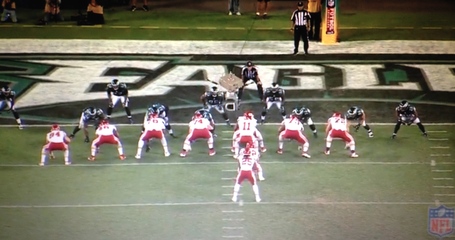 Kansas City is sitting on Philadelphia's 3-yard line with a 16-13 lead in the fourth quarter. The Chiefs are giving the look of a two-tight end set, making the defense think they are going left. Sherman is lined up directly in front of Charles, and goes in motion a few steps to his right before the snap. 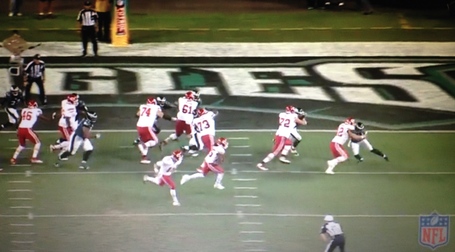 Instead of going left, Andy Reid calls a stretch play to the right side. Charles sprints toward the sideline while Sherman locks onto Allen on the far right of the screen. Sherman is driving the smaller Allen, but credit the safety for sticking his nose in there. 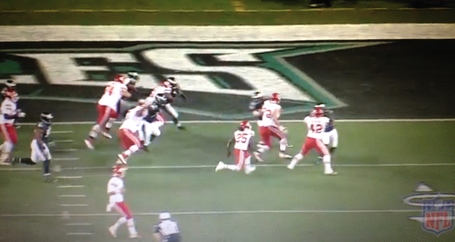 Sherman stands Allen up and keeps him at a standstill. Charles thinks about cutting inside but decides to head for the far pylon. Sherman needs to hold his block for a solid two seconds and does it. In this position, Allen has to out-muscle Sherman. He has no chance. 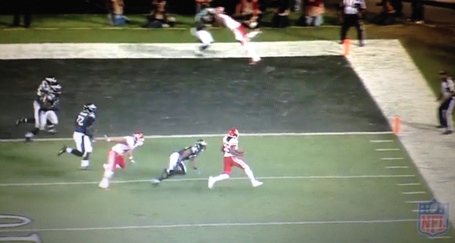 Allen tries to disengage and get to the outside, but falls in a diving effort with the help of a shove from Sherman. Charles gets the edge and scores the game-clinching touchdown. On a side note, check out the effort from Junior Hemingway in the back of the end zone. I love it.

Sherman proved in this game that he can block effectively going between the tackles or to the left and right. While that sounds obvious, some blocking backs prefer to go toward one direction,; a comfort zone if you will. If Sherman has a preferred side, it is impossible to tell.

Here is a table showing which direction the Chiefs ran and how often with Sherman in to block:

Despite the Chiefs only rushing to the right twice, Sherman looked very comfortable going that way as evidenced by the touchdown. Reid was very fond of running behind Albert, Allen and Hudson on this night, something that can't be surprising when you consider the struggles Eric Fisher was having at this point. 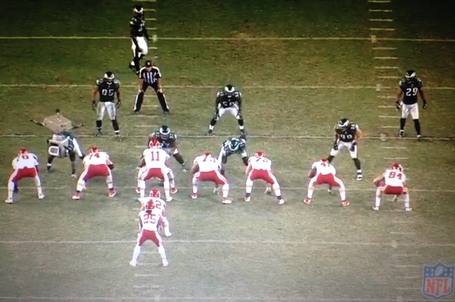 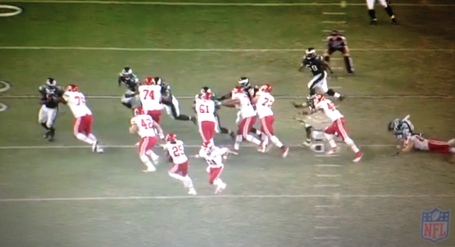 As you can see, Geoff Schwartz is lined up in place of Allen at left guard and is sealing off the hole with a nice block. Albert is kicking out the outside linebacker once again, with Sherman rushing ahead of Charles to clear a path. In the next frame, we see what makes Sherman a tremendous asset. 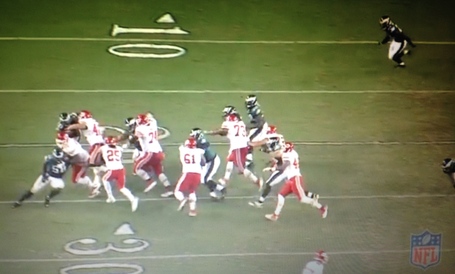 Look over Charles' left shoulder, and you see Sherman absolutely plowing Kendricks out of the way. Sherman has extended his arms and is driving his opponent, taking him completely out of the play. 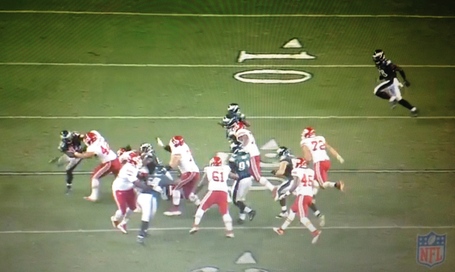 Here is the finished product. Sherman is on the far left, finishing a strong block on the 240-pound Kendricks as Charles picks up four yards late in the fourth quarter. This drive ended with the Chiefs up 10 points as it clinched the game.