How did Fisher improve as the season went on? Grab about eight coffees and start reading.

Yesterday, you hopefully read the first part of this two-part breakdown of Kansas City Chiefs tackle Eric Fisher. If you missed it, I broke down every pass-protection snap of Fisher's day against the Houston Texans, both highlighting the good and bad with text and photos.

In this portion, I will do the same, but in a game that was played two months later. In this edition, the Chiefs are playing against the Oakland Raiders with a playoff berth in waiting. Between the Houston and Oakland game, Fisher had missed two starts as he battled through injury.

However, Fisher had time to shake through the rust, playing against Washington before suiting up in the Black Hole. Without further talk, let's get to Fisher's performance.

On this afternoon, Alex Smith completed 17 of 20 passes for 287 yards and five touchdowns against zero interceptions. Of course, this is also known as the Jamaal Charles game, when the best running back in the NFL scored five times, including four times of the receiving variety.

In this game, Fisher played 24 snaps in pass protection before succumbing to an injury in the fourth quarter with the game in hand.

Of the 24 passing plays Fisher was involved in, I charted the downs and distance for each occasion. This is my system:

•Any play on first down was considered a run/pass opportunity.

•Second and more than seven was considered a passing down, with anything less being a run/pass.

•For third down, anything from three yards and up was charted as a passing down. Less was a run opportunity.

Here is the breakdown:

As you might remember, Kansas City scored 56 points on this day. Suffice to say, the Chiefs were racking up plenty of yardage on all downs, including a good chunk on first down. This certainly made life a bit easier on the offensive line, with play-calling tougher to guess for Oakland.

Still, it should be mentioned that Kansas City found itself in a fair amount of second and third-and-longs, including a down and distance of 2nd or 3rd and more than 14 yards on four occasions. Thanks to Charles, some of those plays turned into touchdowns.

As for Fisher, let's look at his one-on-one opponent breakdown:

Fisher saw Hunter more than anybody else and was able to really dominate. The sack came on the plat Fisher was injured, and even then Hunter was on the ground and just reached out to trip Smith. On the other 12 plays, Hunter did nothing. It was impressive to watch.

One thing that surprised me was Oakland failing to match Moore against Fisher more often. Moore was eating Fisher up early, getting a pair of pressures. Fisher recovered to play better and stymie Moore, but it seems like Moore was a much better bet to create havoc.

Here are the moves used by Oakland against Fisher:

Tale of the tape

Below, let's take a look at how Fisher effectively stifled Hunter on a speed move: 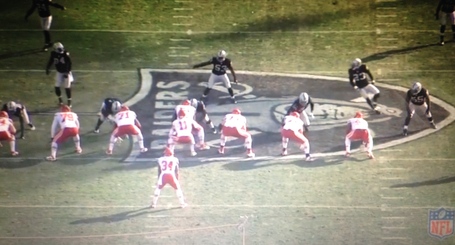 Here we see Fisher lined up in a two-tight end set with Kevin Brock on his right and Hunter opposite him. Hunter will try to utilize a speed rush off the outside shoulder. 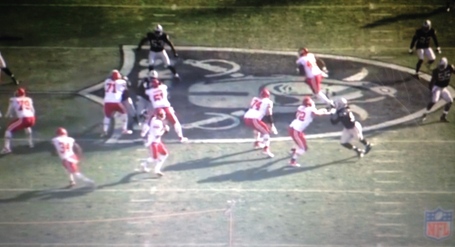 At first glance, Fisher is in good position with solid knee bend and a good punch, albeit a tad high. Fisher is trying to fend off a rip move by Hunter, who is attempting to swipe Fisher's right arm to get around the edge. 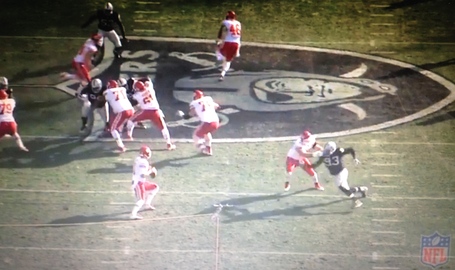 Here, Fisher is in trouble. Hunter has effectively ripped by and has the inside track to Smith. Fisher appears beaten, but shows off terrific athleticism in the next frame. 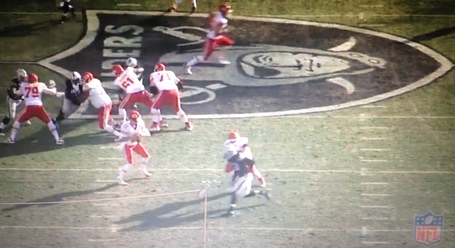 Fisher keeps his feet moving in a slide position and pushes Hunter hard don the inside shoulder, giving Smith a clean pocket and ample time to throw. Fisher's athletic prowess comes in handy, along with some quick feet.

Now it is time for a little of negativity. Fisher displays excellent footwork most of the time, something that was noticeably better later in the season. However, this is an example of what can happen when your mechanics break down: 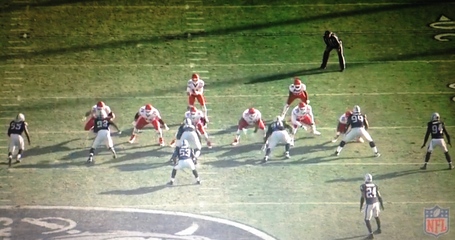 Fisher is lined up on the weak side, across from Hunter (#93). Off the edge we see Moore threatening from the outside linebacker position with the Raiders employing six men in the box. 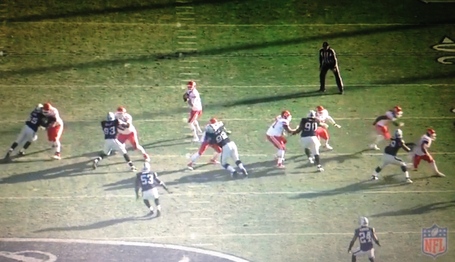 Moore comes off the edge and immediately wins this battle. Fisher's feet are extremely off-balance because Moore got into Fisher's chest first, giving him all the leverage. Look at how low Moore is compared to Fisher. 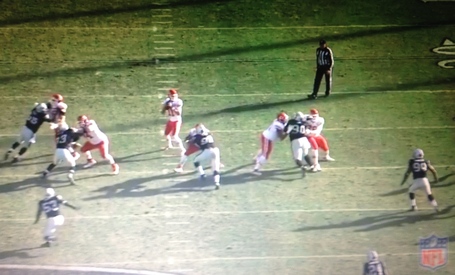 Moore has completely jacked Fisher up, getting him upright. From this position, Fisher is absolutely helpless. This all stems from not getting the initial punch and allowing his power to be stolen. 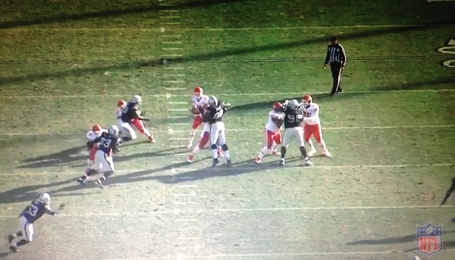 The result is Moore throwing Fisher to the side and almost getting a hit on Smith, who gets the ball away for a short completion. Luckily, Smith was aware of the rush and made a nice play, but this is an example of Fisher's biggest problem; beating the defender to the punch.

Now we have the same matchup, Moore vs. Fisher, in a one-on-one battle. Moore will try the exact same rush, but this time Fisher is ready: 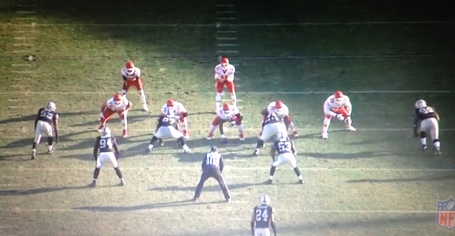 Here we have Moore lined up once again over Fisher's right side. He tries to use the same rush that he displayed earlier in the game which resulted on a hit of Smith. 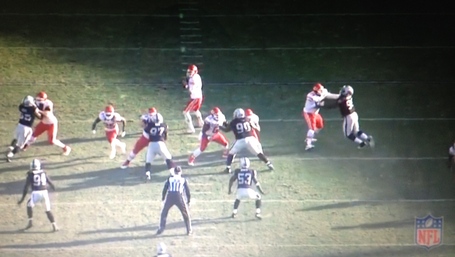 This time, Fisher gets into Moore's chest first. Moore is the one who gets loses momentum as Fisher gets low and has a nice, wide base with his feet. 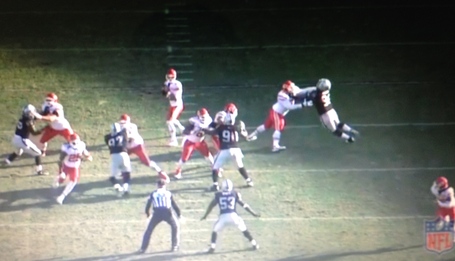 Fisher has now set his feet and has sunken his hips nicely. Moore has lost the battle of the hands and therefore has no power, and nowhere to go. 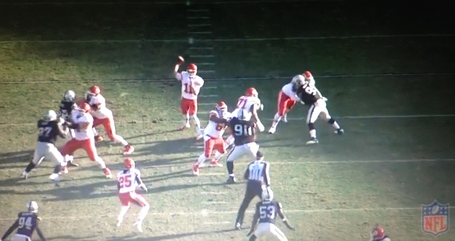 This frame looks very similar to the one above. The difference? This is almost a full second later. Moore has not made any progress at all, as Smith throws a nice ball to Jamaal Charles. Well done, kid.

Fisher plays very well on almost every play, showing why the Chiefs made him the top overall pick in 2013. The main problem is what appears to be a momentary lack of focus, causing a bad play due to poor fundamentals. Fisher is always in a good stance, but occasionally is tentative with his hands. When that happens, he gets put on skates. The good news is he has a strong lower body, allowing him to reset most of the time.

For the biggest positive, it is his athleticism and capacity to learn. In the two games I watched, he was never beaten with the same move twice within a contest. He quickly adapted and played excellent second halves compared to early in the game.

It is too early to say whether Fisher is a good pick or a bust-in-waiting, but if I had to say, I honestly believe he will develop nicely. I'm not saying he will be a Hall of Famer, but after watching the film my paralyzing fear of Fisher starting at left tackle mostly went away.