What does the rookie bring to the table?

Share All sharing options for: Aaron Murray film room: What can the new QB offer the Kansas City Chiefs?

With OTAs having started up, we've finally gotten to see something that sorta resembles football if you take out the pads, most of the contact and, you know, a bunch of other stuff. But I don't care even a little. For me, the slightest bit of Chiefs news is like a sip of water amidst the Sahara. I don't just take it and move on. I savor it. I cherish it. I swirl it around my mouth and overthink how long I should wait until I swallow it (somewhere along the line this analogy started to fall apart). What I'm saying is, it's great to have football back.

Of course, that doesn't mean there isn't serious interweb business to attend to. I've made it this far into the offseason without a single column with lists, which I think is some kind of record for a football blog in June. A big part of that has been my discovery (thanks to some AP members) of the incredible website Draft Breakdown, which provides more film than I ever deemed possible on incoming rookies.

Because Murray had a long career at Georgia, there's a TON of film on him. I limited my research to all 2013 games available, which came to eight total games of snaps. I feel like that's more than enough time to get a feel for a player. Murray is an interesting player who has some specific strengths that fit really well with an Andy Reid offense.

As always, don't blindly take my word on these things (unless you really want to. Then feel free). There's no excuse to not watch some tape (besides that whole "I'm busy, ya know, working 9-5") and form your own opinion when it's made incredibly easy. For roughly 984 games of Murray, click here.

(Sorry, I'm just excited. If someone doesn't get me a mailbag question about this soon, I may weep)

I could go through his college stats (which are impressive), but Murray is well-known enough that the numbers should be familiar to you. Let's go straight to the film. 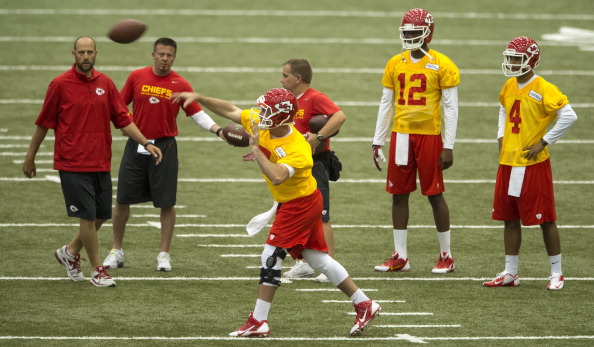 Watching Murray play is interesting. On one hand, I'm surprised he fell as far as the fifth round. On the other hand, I'm not really that surprised he wasn't a top pick. Where to start? Might as well delve into arm strength, since one of the knocks on Murray is that he doesn't have an "NFL arm."

First, though, what does it mean to have an "NFL arm?" It seems like people erroneously believe that it's the ability to sling the ball 60 yards down the field without setting your feet. Not so. The deep ball is the LEAST important aspect of arm strength. Wanna know a dirty little secret? Virtually every quarterback in the NFL is capable of throwing the ball 40 yards without making it a "duck" (naturally, I'm excluding Tyler Palko from that statement).

Arm strength, for the most part, isn't about the deep ball. It's about the ability to gun the ball into a small space before a defender can close.

Arm strength isn't about the deep ball. It's about the ability to gun the ball into a small space before a defender can close.

On this throw, Murray does just that. He puts the ball ACCURATELY (because what good is a gun if you throw it five yards behind the guy?) in a small window and is able to fire it in there before the defender can close that window.

Now make no mistake, no one is going to confuse Murray with Brett Favre. However, he has the arm to make any throw he needs to make in the NFL. Since it's almost obligatory, here's Murray throwing it 45-plus yards down the field and hitting a receiver in stride.

Not much else to say about that. Murray doesn't have a remarkable arm, but he doesn't have one that will be a weakness, either. A wise man once told me that you'll learn a lot more about a quarterback's arm strength when he has to throw a 15-yard out to the opposite side of the field than from a 40 yard bomb. That wise man was absolutely correct.  If your quarterback can make that throw, his arm won't be an issue (generally speaking).

15-yard out to the opposite side of the field, check. There's a lot more to like about that throw (one of the most difficult I saw him make), but we'll get to that in a second.

First, I have to say that Murray's arm strength is definitely NOT exceptional, or even "good." I'd put him as an average arm. He definitely makes throws that "float" more than I'd like at times. The interesting thing is that it's not consistent. It's not as though every pass flutters ala Palko or Christian Ponder. He makes quite a few passes that are fired in there. In fact, he needs to work on putting more touch in short throws at times rather than rifling it in there. A weird dichotomy of flaws there.

I believe the reason for this occasional lack of arm strength (that comes out of nowhere, seemingly) is that Murray generally covers having a very average arm with EXCEPTIONAL footwork. Go back and re-watch that last GIF. Murray has to make a very awkward, unusual turn to make the throw (due to the play action). Notice anything about his feet before he throws? He gets a solid base beneath him despite a really, really weird motion.

That brings us to perhaps the most impressive aspect of Murray's tape: his footwork. With every GIF I post (and every video you watch) you'll see the same thing from Murray: exceptional footwork for a college quarterback. It doesn't matter where he's in shotgun, pistol, or a pro set. It doesn't matter if he's just "rocking back" from shotgun or taking a full seven step drop. The motion is the same virtually every time. No wasted movement, feet constantly under him, his base set before every throw. 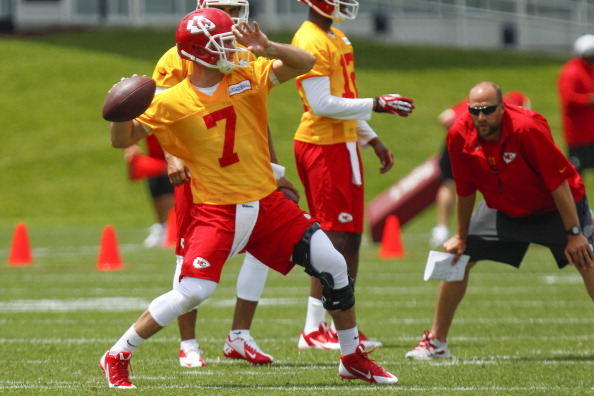 Even with an extremely quick throw (and we'll talk more about that throw, which was a beauty, in a moment), Murray gets his feet set under him. Time after time after time. His footwork is just very good. I believe that's why Murray's throws are generally stronger than you might expect from a guy with an average arm. When your mechanics are sound, you'll often make a stronger (and more accurate) throw than a guy with a stronger arm whose footwork isn't correct.

Another area where that footwork helps him is movement around the pocket. Even when things are going wrong with his blockers (and with the pass rushes he faced, that happened a lot), Murray's footwork moving around the pocket remained VERY good. He keeps a great base underneath him as he moves up in the pocket, and generally does a very good job staying ready to throw despite having to move.

Murray was definitely not a "one read" quarterback.

That footwork makes his pocket presence look stronger than I believe it is. Murray has a tendency to feel phantom pressure. Now he's not awful about it, but there are times when he'll move away from pressure that isn't there. The good news is that he does so while keeping his eyes down field and looking to hit a receiver. However, if he could clean up his "feel" for the pass rush he'll be a very difficult quarterback to sack with his already-solid footwork and ability to move.

Speaking of keeping eyes down the field, Murray was definitely not always a "one read" quarterback. Georgia's coaches clearly relied on him to make good decisions, and there were many times he went through multiple reads before making a throw.

In that GIF you see Murray start left and work his way right on progressions, quickly and calmly. It's worth mentioning that this was a game he was getting HAMMERED (one of several. Missouri and Auburn were beating the crap out of him). Murray's decision making is right up there with his footwork as 1a and 1b "most impressive" elements to his tape. I rarely saw Murray make a stupid throw, and he generally got the ball to the right place when blitzed.

Of course, one has to note that Murray isn't perfect when it comes to the mental side of the game. I saw more route mixups with him and his receivers than I'm comfortable with. Now, apparently there were some injuries on Georgia's offense and Murray was working with newer guys. But all the same, miscommunications and mixups, if they happen often enough, fall on everyone. Of course it's impossible to know who was to blame more often, but Murray has to shoulder at least some of the blame.

It seemed when he would start trying to force things (and his footwork got sloppier) his accuracy diminished.

Since I'm talking about negative stuff, I'd be remiss if I didn't say that Murray makes at least 2-3 really bad throws a game. I'm talking one-hoppers, or throws that sail five yards out of bounds, etc. I'm not sure why that is. His accuracy is generally very good. Re-watching a couple of games, it seemed when he would start trying to force things (and his footwork got sloppier) his accuracy diminished. That's something he'll have to work on.

However, the raw material is definitely there when it comes to ball placement. Remember the fade up above (this one) that I said we'd come back to? That wasn't an aberration. Murray throws a GREAT fade in the red zone. Look at this.

Murray just FLOATS those throws in. Definitely a strength of his.

Regarding athleticism ... Murray was a better athlete than I expected. He's a decent runner. I wouldn't quite put him at Alex Smith's level in that regard (he's a step slower), but Murray will take off and run.

The guy can move for a short fella. 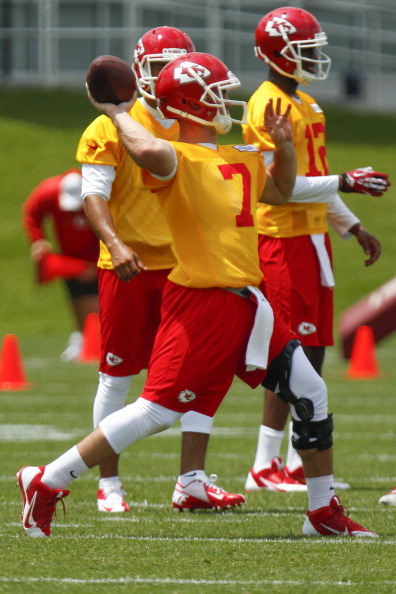 Watching Murray's tape, I can definitely see why the Chiefs considered him a steal in the fifth round:

These are things that a lot of quarterbacks don't come out of college possessing. Murray's a project, but he's a very polished project. Of course, on the other hand I can see why Murray fell past the second or third round, or why teams would decide he didn't have enough upside to be worth a shot.

As I suspected, there's some good and some bad with Murray's film. All that said, I'm not surprised Andy Reid took him. You know who he kind of reminds me of? You do, don't you? I won't say the name, I'll just say a certain quarterback who Reid says he loves, and wanted to coach for a long time. Who wears red on game day (or white, I suppose).

Murray's ceiling might be limited due to his average physical traits. On the other hand, he's polished enough that I won't be even a bit surprised if he beats out Chase Daniel for the backup position. I don't know if Murray is Reid's long term plan (I do think they're trying to keep Smith, frankly), but he'll be a fun player to watch in the preseason.

For those who are interested, here's a link to a throw chart of six games Murray played in 2013. If you click on any area in the chart, it brings you to a video of all the throws Murray made to that portion of the field during those six games. It's a marvelous tool to look at a ton of throws by Murray. Take a look, draw your conclusions, and tell me whether Murray is the Chiefs QBOTF (because it's the offseason, and wild speculation is all we have!).