Anatomy of a Play: Jamaal Charles torches the Raiders

Share All sharing options for: Anatomy of a Play: Jamaal Charles torches the Raiders

With the offseason continuing to drag out and studying for the bar getting more vomit-y (checking... nope, not a word. Oh well) every day, I find myself looking more and more at Kansas City Chiefs 2013 game film. This is partly because I'm starving for football and need an excuse to get away from books about Real Property (hands down worst law subject ever. I hate land at this point and am actively rooting for a "Waterworld" type disaster to rid me of this subject), but it's also because I find out new and fun facts every time I go back and re-watch a game.

When you watch tape of a game after it's occurred, your entire perspective on the game is shifted. You're no longer watching the ball or worrying about the score. Instead, your eyes drift to other players. Maybe you re-watch with the specific intent to keep an eye on one player. Maybe you watch the offensive line to try and figure out why an opposing teams' pass rush was in our grill all day. Whatever it is, I'm of the opinion that you learn a thousand times more re-watching a game once than you can from literally any kind of analytical stats. That's why I'm a tape snob.

Sometimes I watch to see what went wrong (the playoff game). But other times I'll re-watch a play that went very, very right and try to figure out how it all happened. Sometimes it's obvious, sometimes not as much. But it's always rewarding to spot little thing that I missed the first time.

I was in the process of doing this very thing when I thought to myself, "Hey, since I'm doing this anyway I could, like, write about it or something." And so a new series was born. Over the next couple months we're going to look at a few plays and examine more deeply what went wrong (or right) with the play. Since it seems more fun to start on a high note, we're going to go with a "good" play.

In Week 15 the Chiefs traveled to Oakland after pounding the Redskins into the dust. We were excited to see more of the same. Granted, it was a weird week for our defense, but the game produced some spectacular plays on the offensive end. None more so than Jamaal Charles's 39-yard touchdown on a screen with 7:38 left in the first quarter. Let's dive in... 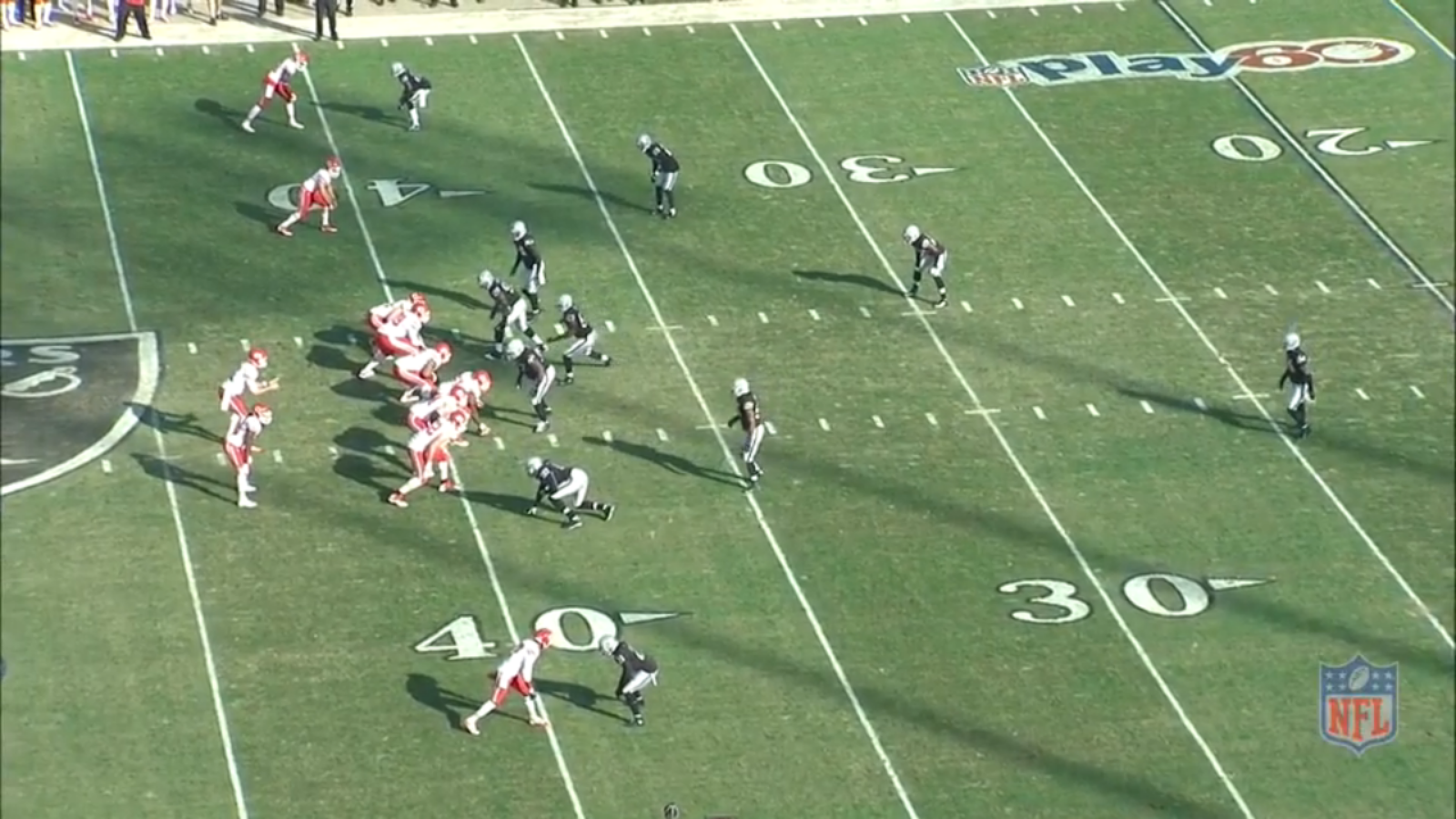 The Chiefs are lined up in the pistol, with JC to Alex Smith's right.  Dwayne Bowe is lined up wide left, Donnie Avery wide right, with Chad Hall (he of the legendary "Chad Hall Drive" fame) lined up in the slot. Sean McGrath is on the line on the left side. The offensive line consists of (left to right) Donald Stephenson, Jeff Allen, Rodney Hudson, Geoff Schwartz, and Eric Fisher. The Raiders are showing blitz. 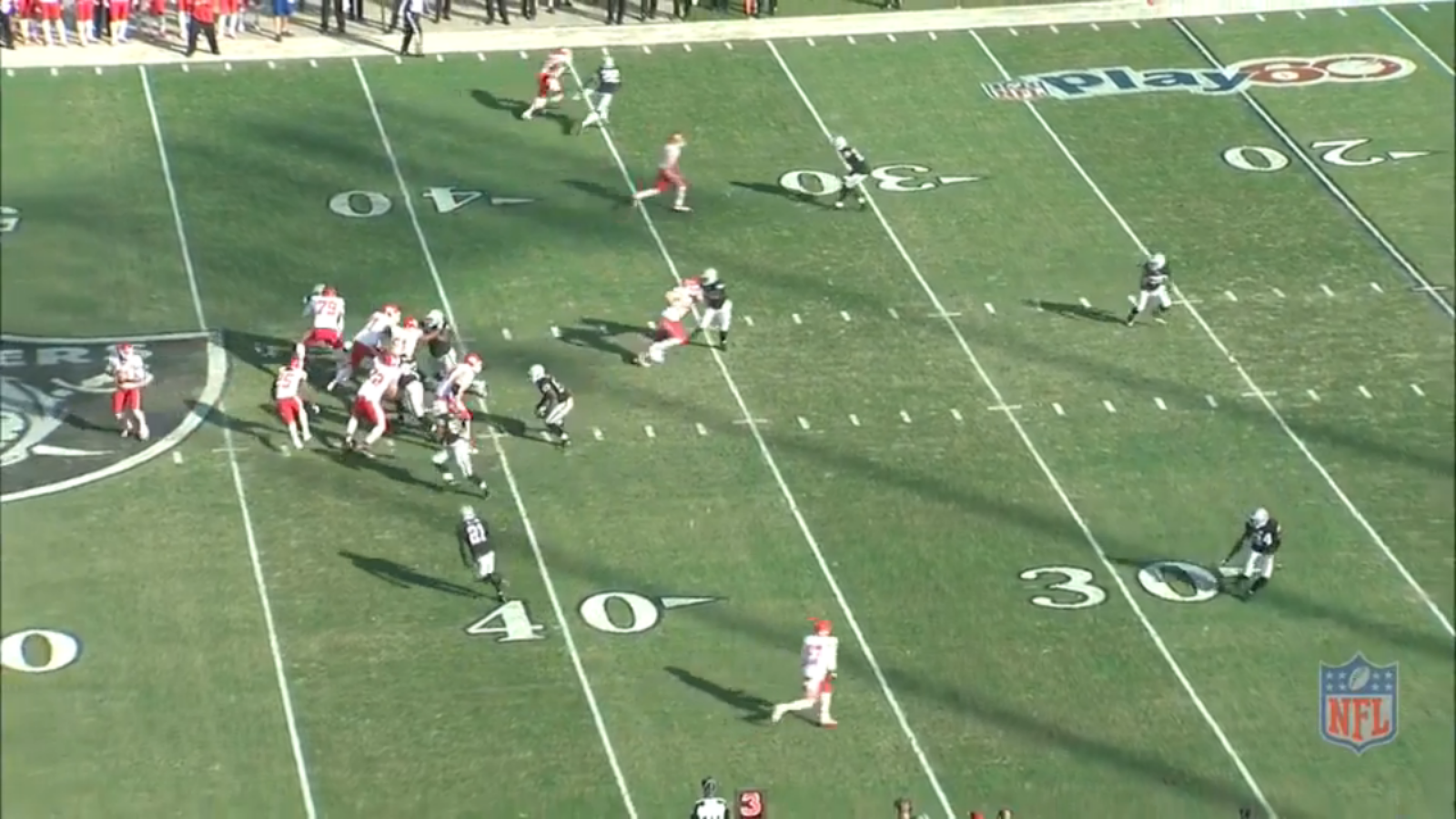 The ball is snapped and da Raidas are sending the house (kind of). Six Raiders are rushing the quarterback, including two that have what amounts to a free shot at Smith. Both are free because Charles, rather than sitting in pass protection, is already heading left  for a screen that is a perfectly timed call against an aggressive Oakland defense.

Note that the receivers are all heading out as if on routes rather than blocking immediately, and all are going hard to sell the screen. That might seem like a trivial thing, but it's vital to the success of a screen play. Drawing secondary players down the field gives the running back a basically open second level if he can get past the line of scrimmage. You need guys that will sell the play and not jog it out because they're not seeing the ball. Let's go forward a second. 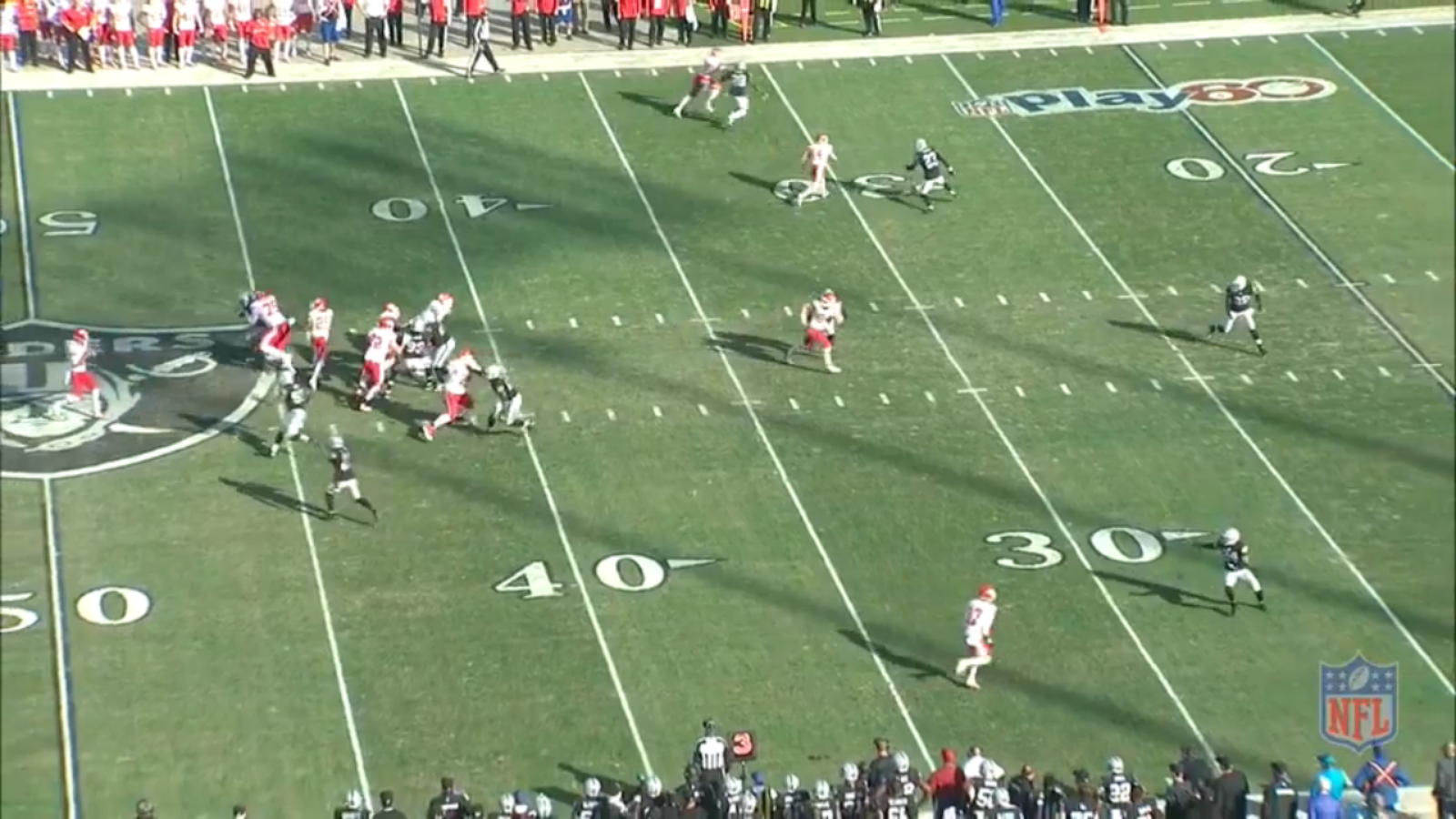 Smith is back-peddling like a madman because the Raiders corner blitz is closing in FAST. Overall, though, the offensive line has held up well. Fisher and Schwartz do a great job handling a stunt and neither is giving any ground whatsoever (Fisher actually directed his guy into another Oakland rusher, basically cutting off one direction for the other rusher to move. No idea if it was an accident or on purpose, but good stuff).

Allen gave Hudson help with a rusher for just a second (Hudson is giving up nothing, so it's not really an issue) and is now getting ready to move into open space. Stepehenson lets his rusher get upfield and out of the way of the screen (though he loses the hand battle momentarily and makes Smith sweat at least a little), but sticks with his guy long enough for Smith to get the throw off. Smith does so while still basically running backward. Jump forward to the catch... 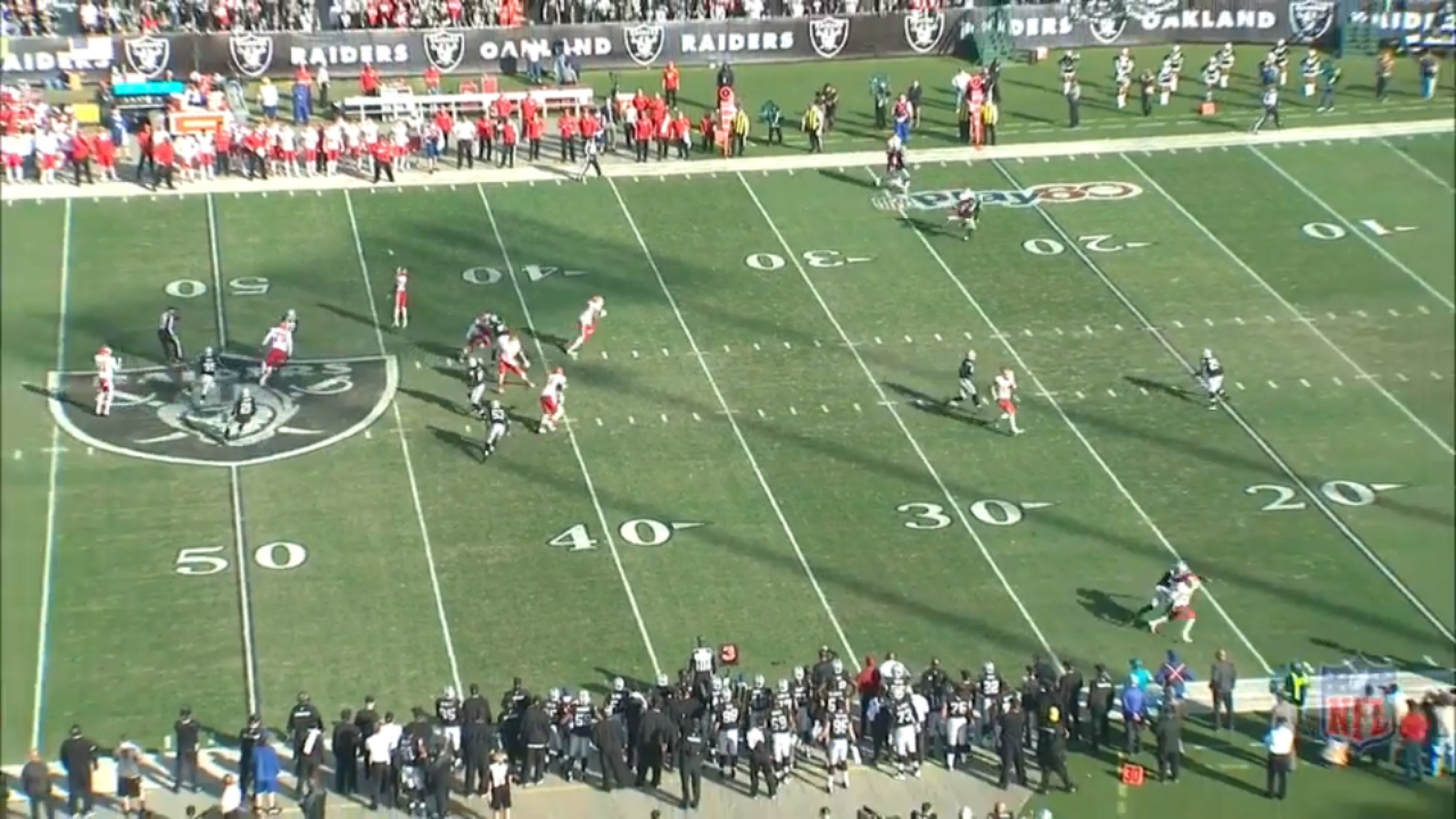 Not a good throw by Smith, even factoring in the fact that he was backpedaling. JC stretches out his right hand all the way and snags it on he run. He's awesome. I mean really, really awesome.

In the meantime, down the field only one Oakland secondary player seems even kind of aware that the play is a screen and their defense is in trouble. You can really see from this photo why aggressive defenses have to be disciplined and very careful. A properly called and executed screen leaves over half your defense without even a SHOT at making a play. In particular, a corner blitz takes one of the few guys on the field with a prayer of catching a burner like JC completely out of the equation.

Jeff Allen has hustled out to lead the attack (he's the OL out ahead of the rest) and Geoff Schwartz is following (at Allen's 7 o'clock). You can already tell this is going to be a big gain. But how big? 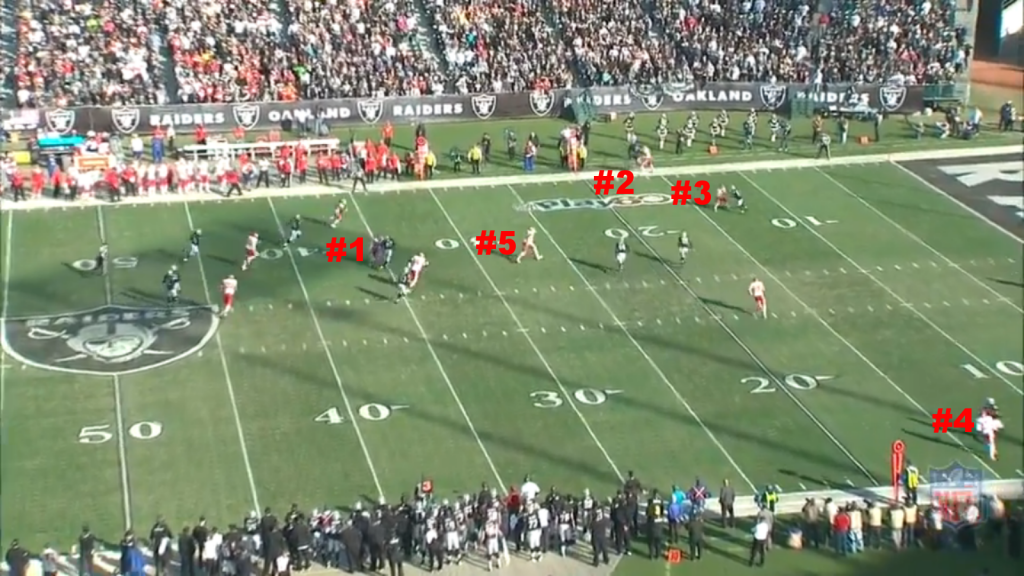 When an offensive coach draws up this play, this is the scenario he dreams of. As you can see, I've numbered five different "blockers" (I'll give the reason for the quotations marks momentarily). Let's look at each one.

No. 1- Rodney Hudson is holding his block and riding his guy all the way down the field. THAT'S how you finish a play. His doing so prevents the defensive player from narrowing the field for Charles, who has so much space around him that he could do a somersault and come up without being tackled. Great block. The touchdown maybe happens without it, but maybe not, and I totally missed it the first time around.

No. 2- Dwayne Bowe is a great blocker. It's easy to shrug that off when bemoaning his contract, but CRAP does that come in handy at times. He's literally keeping his defender from even getting onto the field. Don't tell me WR blocking doesn't matter. It's what helps turn "good plays" into touchdowns.

No. 3- Chad Hall is not nearly as strong as Bowe, but on this play you can see why coaches like him. He engages his defender and refuses to let him get by to affect the play. Not Dwayne Bowe good, but still very good.

No. 4- Donnie Avery is why I said "blockers." He's not blocking anyone. But he might as well have, because there's no way that guy does anything on this play. This shows a great play design, taking the defender out of the play completely. Also, it underscores how important awareness is in a corner. It really isn't about just "guard your man." Because when that's all you worry about, you run yourself right out of the play.

No. 5- Keep an eye on Jeff Allen. You'll see why. In fact, lets do a series of pictures now. 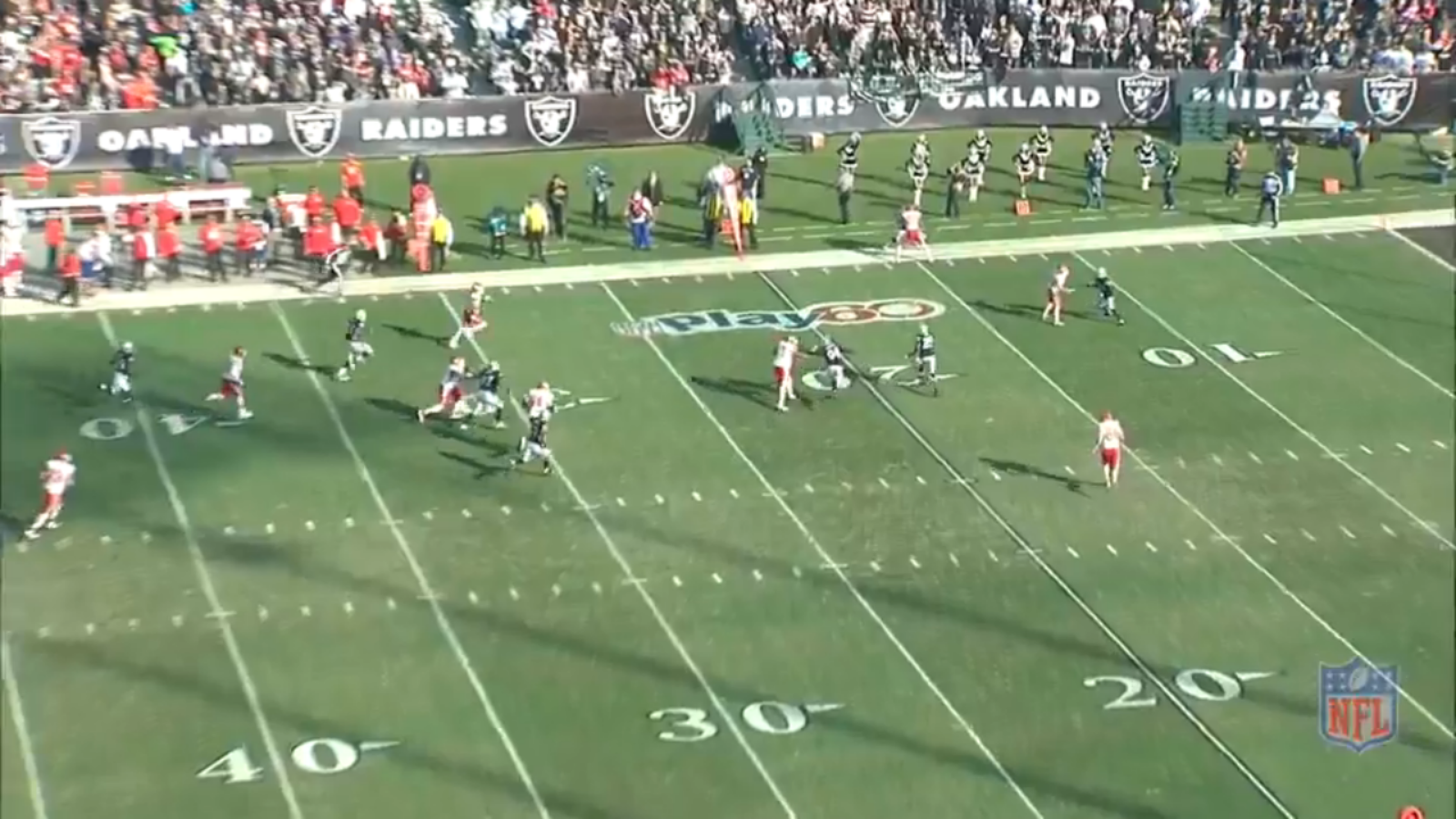 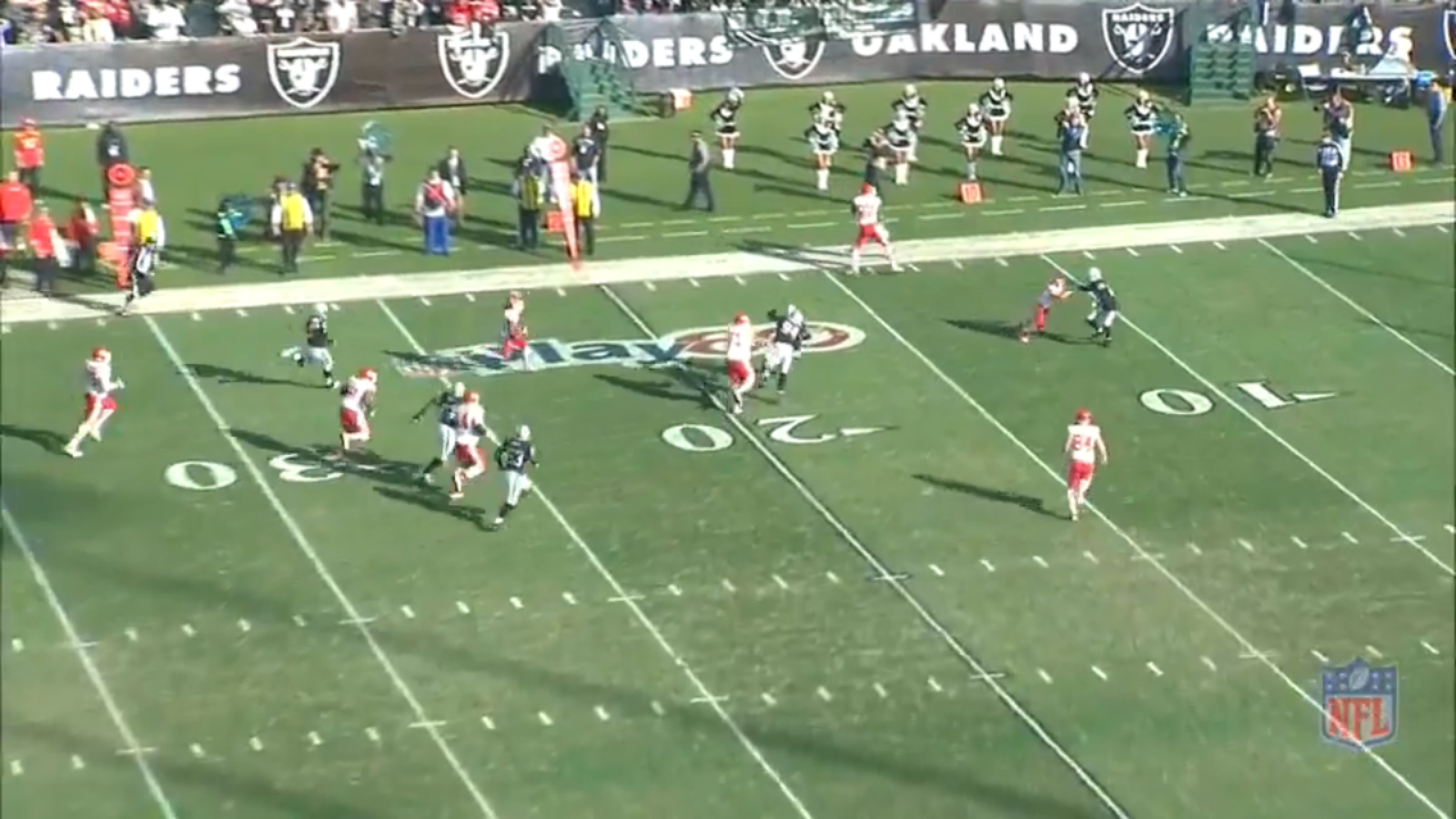 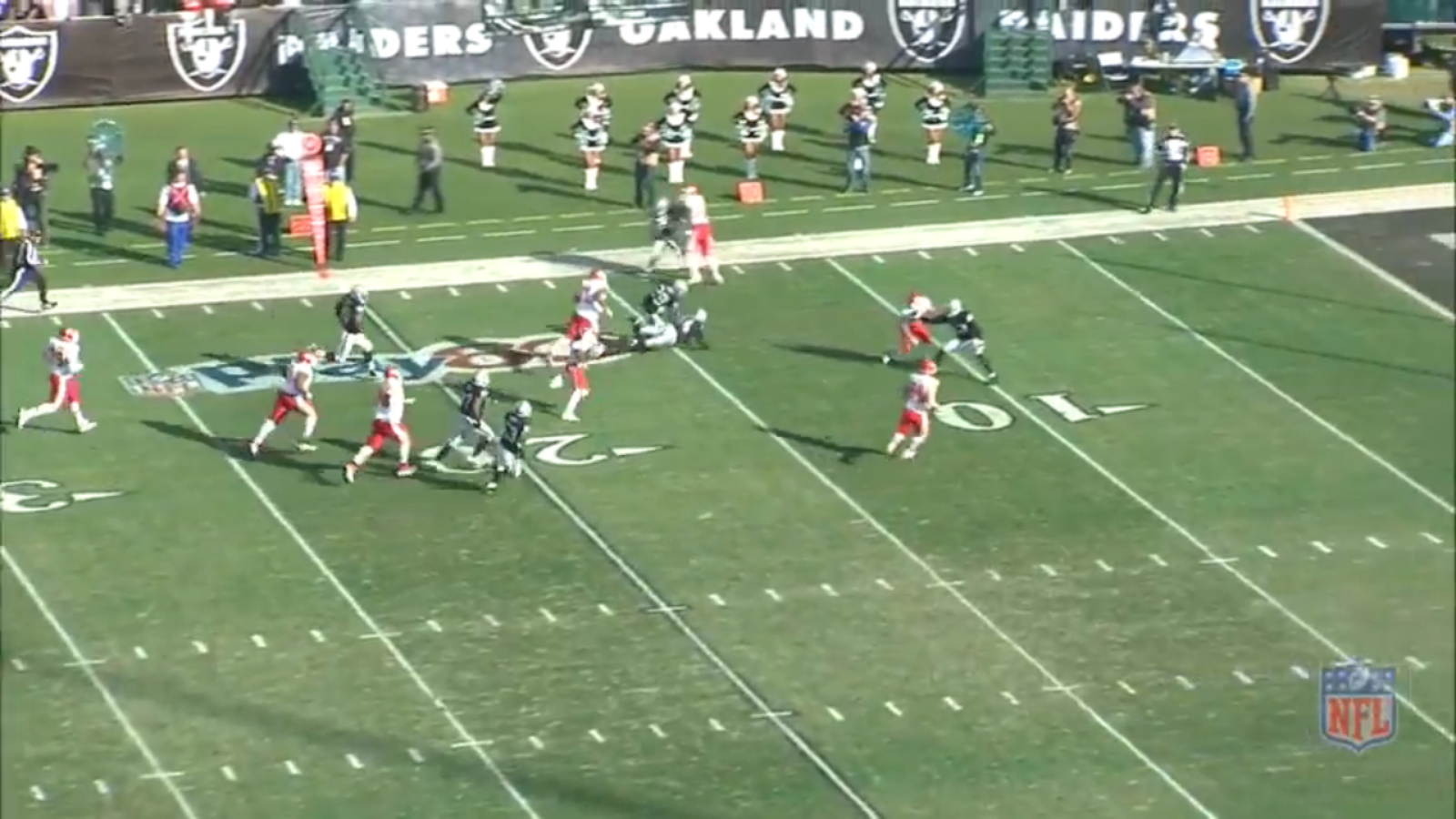 I'm just so happy right now. Might as well go in the same order of guys we talked about before.

Hudson stays on his man far enough down the field to prevent him from doing anything to JC unless the man decided to just stop or something.

Bowe continues to absolutely own his defender. It's like he's frozen the guy in place. Look at all three pictures in succession. They move like half a yard. You cannot lock someone better than that outside of pancaking him. That's unreal.

Hall is having more of a fight, but notice his guy hasn't gained any ground either? Seriously, Hall and Bowe make this play what it is (well, that and a couple more things we'll get to in a second).

See Avery's guy anywhere? Me neither.

And finally, Jeff Allen. Beautiful, gigantic Jeff Allen. He hauls all 300-plus pounds down the field and sees, much to his dismay, that there are several men in black uniforms who want to prevent Jamaal Charles from scoring a touchdown. Naturally, this bothered Allen, as he really likes seeing Charles score touchdowns. But what's he supposed to do?  There are two of them and one of him. Play over, yeah?

Well, no. Because Allen decided to go all Damion McIntosh on those fools (say what you will about McIntosh, that's one of my favorite plays of all time). He takes the silly little Raider immediately in front of him and gives a shove that sends the guy sprawling into his own teammate. And all of a sudden JC's got a ton of daylight to cut back into. And I think we all know what JC does with daylight. What a block. 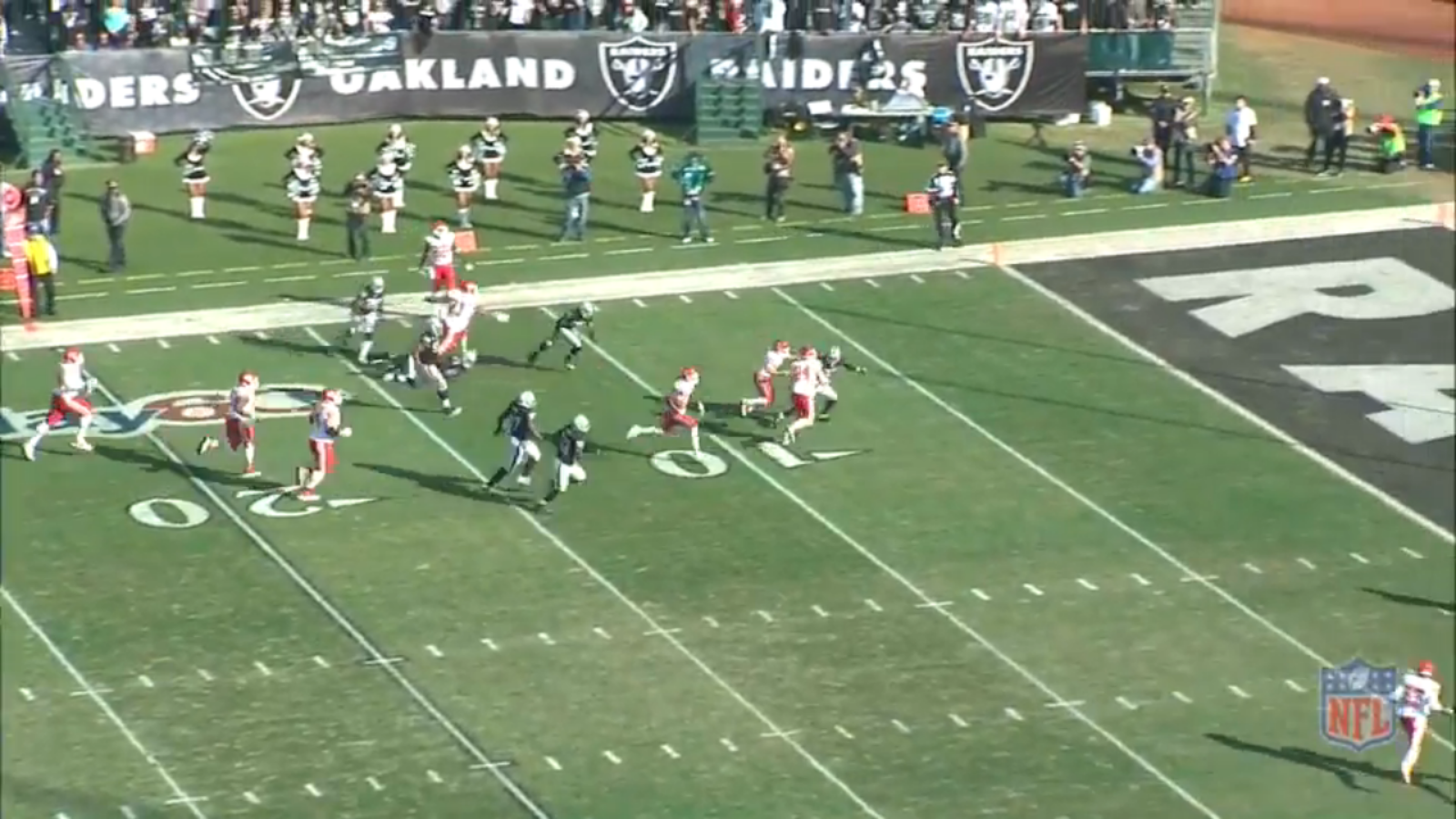 We're on the last picture here. Charles is almost home. The last player who had a prayer (Hall's defender) seems like he's got a shot for just a second ... until The Beard comes from across the field and ensures that doesn't happen. Good to see McGrath playing until the whistle.

On a fun side note, Bowe lets his defender go so he can laugh at the pathetic (and pointless) attempt to catch Charles from behind.

So there you have it, the anatomy of a perfectly timed, borderline perfectly-executed screen pass that results in six points for the Chiefs. What seemed like just another example of Charles taking on the defense all by himself (and winning) was actually a lot more than that. Yes, JC's otherworldly gifts played a huge role in the touchdown. But the exceptional execution of a few other players (particularly the much-maligned Jeff Allen) made this play possible.

What a fun play to re-watch. We'll be keeping this series going. Next time I'll probably take a look at a play gone wrong on offense or defense. Feel free to send requests via email, Twitter, or in the comments.  And also, if you want to watch that play (rather than just look at pretty pictures), it's the very first play of this highlight reel.  Enjoy.  I could watch this stuff all day.