Kansas City needs Marcus Cooper to step up this season. Is the talent there for that to happen?

By doing so, Dorsey declared his faith in Marcus Cooper, a second-year corner converted from wide receiver at Rutgers University. Cooper stepped into action during the Chiefs' Week 4 win against the New York Giants and was sublime. Throughout the rest of the season, he was great at times while struggling at others. In short, he was a promising rookie.

The groupthink is that Cooper was torched by Peyton Manning and Philip Rivers in all four meetings last season. However, groupthink is often wrong. I went back and watched every pass play of all four games, with this piece focusing on the two matchups against the Broncos. The pair of contests versus the Chargers will be coming next week.

With that in mind, I have broken down Cooper's showings into stats starting with the first game. Here are my findings, with pictures included.

On this night, the Broncos would defeat the Chiefs 27-17. Manning had a decent night against our then-vaunted defense, throwing for 323 yards and a touchdown on 22 of 40 passing.

In that game, Cooper was on the field for 38 pass plays. Below is how everything breaks down:

Of his 38 snaps against the pass, Cooper was in man coverage 34 times and zone the other four occasions. Only once was Cooper not pressing while in man. In zone, Cooper was responsible for the deep right-third of the field three times, and the short right zone once. He was not targeted while playing zone.

Of his five allowed completions, all came while Cooper was in man coverage. The big play came on a 70-yard completion to Demaryius Thomas, who broke away on a go route and was dragged down inside the red zone. The play ultimately led to a touchdown.

Why was Thomas able to make this play? He is a veteran who knows how to get away with a push with the ball in the air. That is not sour grapes, it is just fact. Here are the pictures, with Cooper matched up along the top of the frames: 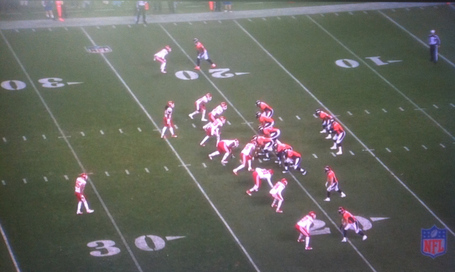 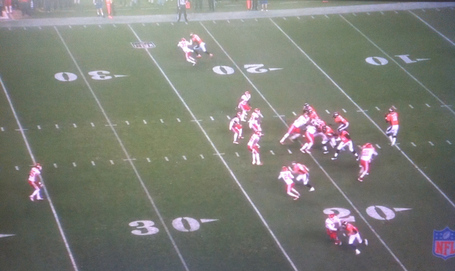 As you can see, Manning knows Cooper is on an island and immediately goes that way. 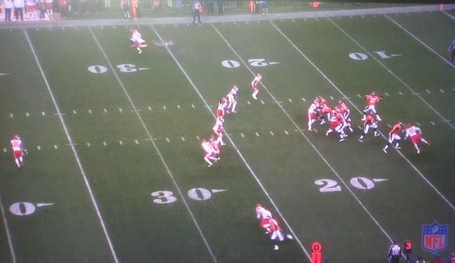 As Manning releases, Cooper has brilliant coverage. He's in perfect position, forcing a great throw with the sideline acting as the other defender.

Thomas then uses his left arm to push off with the ball in flight. A veteran move that Cooper is not ready to counter by swiping it away. 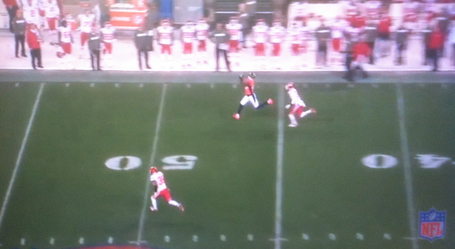 The result. Three yards of separation on the catch and a 70-yard gain.

Let's take a look at how each receiver did against Cooper individually:

Here are the routes run against Cooper while in man coverage:

Cooper was beaten twice with curls, twice with crosses and once on a go route. He successfully defended both screen passes, a trio of go routes and a curl. On the stick and nod, Cooper was called for defensive holding after miscommunication led to his guarding of Wes Welker (not included in targets due to penalty; technically no play).

Throughout the game, Cooper played well. Outside of lining up against Welker due to mass confusion once, Cooper played as the left cornerback. The Broncos knew Cooper would strictly be on that side, allowing them to play Decker or Thomas against him at will. Still, Cooper held up well despite one big play.

Here is an example of Cooper's ability. This is a third down in the third quarter with the Chiefs trailing 17-10. Cooper is lined up opposite Caldwell: 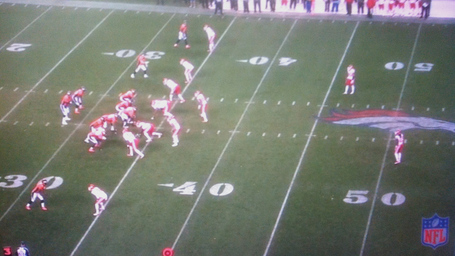 Cooper is at the bottom of the screen with a Cover 2 look behind him. 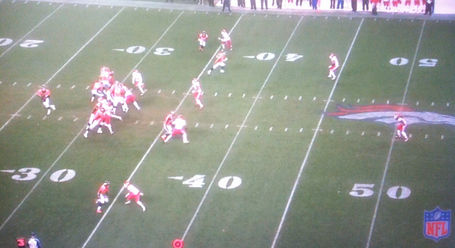 Cooper makes a misstep here and has his hips turned the wrong way as Caldwell plants his right foot to begin a slant toward the inside. Manning sees it and is about to throw, but something funny happens. 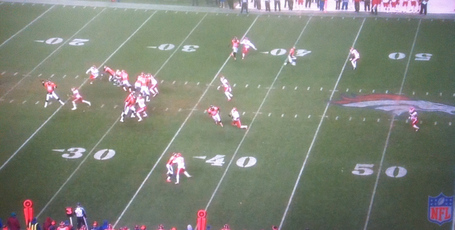 Cooper opens his hips beautifully and gets a great, legal jam. His athletic moves give Eric Berry enough time to blitz up the middle effectively.

Cooper sees Manning under duress, attempting a throw to Julius Thomas underneath. The youngster shows great awareness and the ability to change direction rapidly as he goes for the interception.

Cooper can't scoop the ball off the turf, but his ability to open his hips, get a good jam and then change direction force a punt at a critical moment. Well done, kid.

On this day, the Broncos topped the Chiefs 35-28 in a thriller. Manning had an incredible performance, throwing for 403 yards and five touchdowns with a pair of picks on 22-of-35 passing.

In that game, Cooper was on the field for 34 pass plays. Below is how everything breaks down:

Of his 34 snaps against the pass, Cooper was in man coverage 28 times and zone the other six plays. Only three times was Cooper not pressing while in man. In zone, Cooper was responsible for the deep right-third of the field all six times. He was targeted three times while playing zone, allowing two completions for 28 yards and a touchdown, but also nabbing an interception.

Of his five allowed completions allowed in man coverage, most of the damage came on a 77-yard go route to Thomas (sound familiar?) and a 43-yard post route to Decker. Again, it appears on the surface that Cooper played an awful game, and there is no denying he struggled at times.

Let's go to the film and look at both of these plays to see what went wrong, starting in the second quarter with Decker's big gainer: 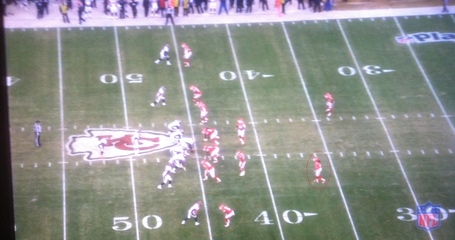 As you can see, it appears we are looking at a press-man with a Cover 2 over the top ... you will shortly see why Lewis is also highlighted on this play. 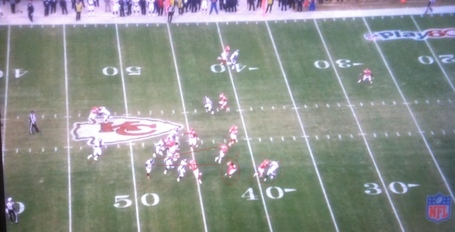 As you can see, Lewis takes the run-fake beyond what I would call hook, line and sinker. I watched this play 10 times trying to figure out if he was responsible for the back in pass coverage, but considering how far out of the middle Demps is, I can't imagine that to be the case. You can also see Berry looking at the back as though it's his man, although pre-snap motion shows the tight end as his assignment.

Also, you see Decker fighting through a so-so jam by Cooper who now realizes there is no help behind him. 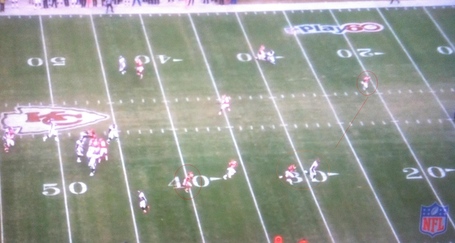 As you can see, Lewis is totally out of the play and Cooper is beat deep with no help. Demps is coming over, but it is far too late. It's my belief this was supposed to be a Cover 2 with Cooper in a trail position. Instead, it turned into a horrendous Cover 1 with Cooper getting a mediocre jam. In other words, easy pickings. 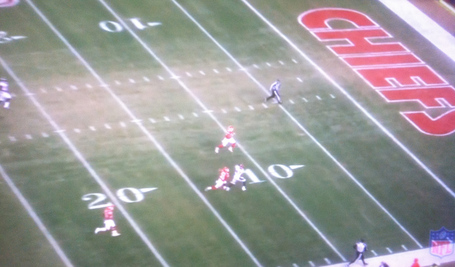 The result is a huge play which leads to a touchdown. Cooper needs to do a better job of getting the jam here, but good safety play makes this either a very tough throw or an incompletion. Cooper did impede Decker for a while, but had no chance once Decker got free. This play lands at the feet of either Lewis (if it was a Cover 2) or Demps (Cover 1). 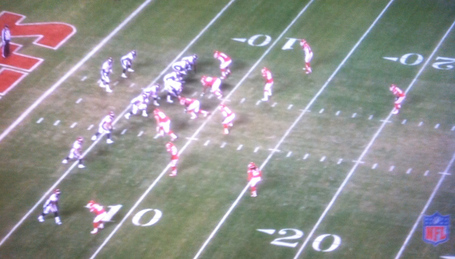 Cooper is at the bottom of the screen opposite Thomas, with a basic Cover 2 look behind him. 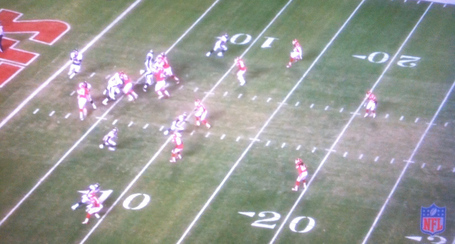 This was the worst job by Cooper in either game. He completely whiffs on the jam giving Thomas a free release. Look at Manning, he is already planting for a throw.

With the ball almost in the air, Cooper is beaten. His help, Lewis, has not moved off the 20-yard line. Not to pile on the guy, but what is Lewis doing here? His first responsibility is not be beat deep. Why is he staring down the tight end while Demps already has him covered? 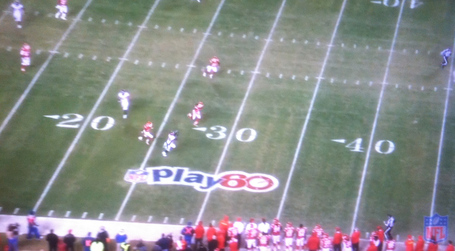 The result is Cooper beat badly and Lewis nowhere to be found. Ultimately, Cooper makes the tackle but the damage is done.

Let's take a look at how each receiver did against Cooper individually:

Here are the routes run against Cooper while in man coverage:

Cooper was beaten on one go route, a slant, a post, a fade. a back-shoulder fade, and twice in zone. He successfully a pair of corner routes, a post route which resulted in a Demps interception, and a zone read in which he picked off Manning. The lone penalty came on pass interference against Decker.

In this game, Cooper was uneven. At times, he displayed what might make him a top-tier corner. He was getting great jams throughout most of the day, running with receivers on longer routes and getting his head around. On a couple plays, Cooper missed the jam completely, resulting in a touchdown and a 77-yard gain for Thomas.

Here is a play on Denver's first drive which results in Demps' interception. This is where we see Cooper at his finest: 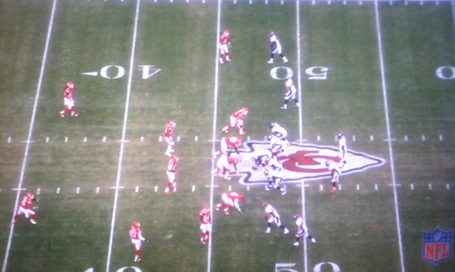 Cooper is lined up across from Thomas at the top of the frame. He's in man coverage with Cover 2 behind him. 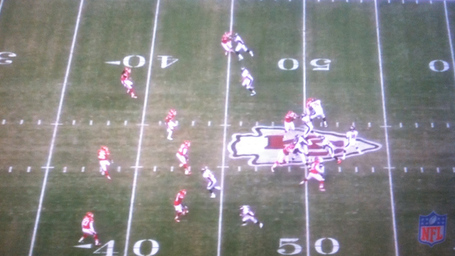 This time, Cooper gets a textbook jam and re-routes Thomas towards the inside, where he knows he has help. 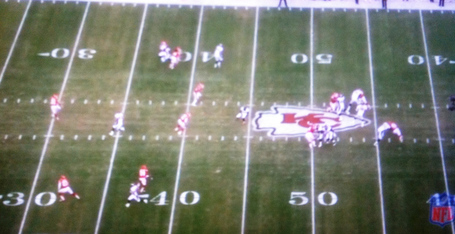 Look closely at Thomas, and you will see Cooper's helmet. He has perfect outside position, forcing Thomas towards the inside. Lewis has driven on the short route, leaving Demps to play the back-third on his own. Demps plays it nicely, ranging over with the throw.

Look at Cooper as the ball arrives. No chance for a completion. The result is a tipped ball and a Demps interception. Perfection.

Cooper's two biggest strengths are getting excellent jams on the line and opening his hips. Multiple times the Broncos tried to beat him deep and could not thanks to good speed but even better technique. Outside of one big play in the first game, Cooper was picked on throughout the night but held his own without the safeties rolling over the top.

As for improvement needed, I'd say recognition of crosses and consistency. A few times, Manning could have thrown an underneath route against him but went elsewhere for the potential of a bigger gain. Cooper has to understand that he is allowed to jam beyond the line of scrimmage as well, as he did against Caldwell in the first game as noted above.

In certain instances, Cooper showed he was a rookie. He did not swipe the receiver's hands off his body and was beaten because of it. However, he never lost his aggressiveness.

Overall, I came away very hopeful. Cooper will never face a better offense in his career and with better safety play, would have done much better statistically. The second game was definitely the worse of the two, with Manning having a field day against the secondary. Cooper needed to get better jams on that day.

The outlook for this year? Bright. He has only been playing corner for two seasons and already has an ample skill set. If he can become more consistent and is diligent in the film room, he will produce excellent results.