The KC Chiefs made their pick at No. 23 in Auburn LB Dee Ford. Now let's grade it too quickly.

I admit it. I don't like NFL Draft grades either. I liked them a lot more a few years ago but as the drafts have gone on I find myself recognizing that it's obviously too early to grade any of these players.

What we can talk about is the scheme and positional fit relative to the players currently on the roster. In that sense, the Ford pick makes some sense as a play for the future with Tamba Hali getting up there in age. The pick doesn't make as much sense if you were looking for an immediate impact. Ford seems like a pass rusher specialist in his first year with Hali and Justin Houston already on the roster.

So if it goes well, it was a good pick. If it goes poorly, it was a bad pick.

The Chiefs obviously believe it will go well after GM John Dorsey called Ford the second best pass rusher in this draft.

The reaction to this pick also reminds me of the Tamba Hali selection. He wasn't really on the radar, he's switching positions ... but, hey, that one ended up alright!

Here is how Arrowhead Pride readers graded the pick: 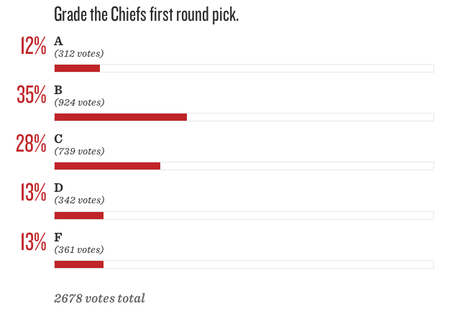 The most common grade from others was a C.

The risk: Dee Ford is a bit undersized and tends to be a bit of a one-trick pony as a pass rusher. He relies a lot on snap anticipation and may not be able to do that as often in the NFL.

2014 NFL Draft: Round 1 grades for every pick - CBSSports.com

Ford's first step, agility and closing burst make him a disruptive threat off the edge and give the Chiefs yet another speed-rusher to rotate in on passing downs. Ford is talented, but the Chiefs may have been better-suited addressing a bigger need here at 23. GRADE: C+

Ford has a lot of work to do before he's an all-around player. He may stay as a pass-rushing specialist, even after Hali moves on.

The skinny: Just about everybody was thinking wideout for the team, but with so much depth at the position in this draft, Andy Reid wisely opted to get a pass rusher. Ford will provide insurance for Tamba Hali and Justin Houston and give the team another pass rusher to throw at Peyton Manning.

There's no doubt that Ford is a reach. The Chiefs could have moved down and still picked him. Ford also won't start anytime soon with Tamba Hali and Justin Houston in front of him. This is the worst pick of the first round thus far, but at least it's not on a Millen level.

Are the Chiefs beginning to prepare for life after Tamba Hali? The 2006 draft pick will turn 31 during the 2014 season and missed time last year due to injury issues. Whether that’s the plan or not, the Chiefs will have to figure out exactly what to do with Ford in 2014. Even though he believes himself to be further along than Clowney, Ford clearly needs a little time to improve his technique. He should be granted that opportunity behind Hali and Justin Houston in Kansas City, and the patience may pay off down the line.