What could Brandin Cooks offer the Chiefs? The Oregon State perspective

Just what would the Chiefs be getting if they brought the Oregon State receiver aboard? We asked Andy Woodridge from our OSU blog, Building The Dam, for more details.

Share All sharing options for: What could Brandin Cooks offer the Chiefs? The Oregon State perspective

As you look at Cooks and the next level, can you give us some specifics of what he brings to an offense?

A combination of speed and route running that compliment each other. Clearly, Cooks can literally run away from even most top level cover corners, but the reason he has set conference records -- in a league known for powerful offenses for decades -- is how hard he has worked to learn his craft, and get better at his route running. And he doesn't drop balls.

What are some concerns or limitations he might have at the NFL level?

Brandin Cooks at the NFL Combine

Brandin Cooks at the NFL Combine

Obviously size is an issue. Cooks can't out-leap some of the bigger DBs out there, though he's better at it than many think, and he's going to have to deal with some very large, hard hitting defensive players that just aren't very common below the NFL level. Cooks will have to continue to play smart, as far as getting open and away from contact versus getting caught up in heavy traffic.

So how does an offense best utilize Cooks?

As I discussed, Cooks is both fast and good at route running. Timing is everything, and Sean Mannion rolled up big numbers with Cooks by hitting him as he broke out of breaks, using that speed to run into a window. Cooks can be used both in deep, crossing, and short routes, as well as running the sweep, because of his speed, but the best results come from timing routes that take advantage of his speed, and minimize his size shortcomings.

If you had to guess at draft status, where do you see him landing?

Draft position is always hard to assess because what other needs a team has, and what their overall personnel strategy and cap status is, dictate a lot of their decisions, so even players they would love to have some times have to be passed on relative to bigger issues.

I think 2/3 to 3/4 through the first round, we will find that someone will be in position to take him, though dropping as low as early second round could happen depending on who else falls further than expected, and what other horse-trading takes place.

Do you have a favorite moment of seeing Cooks play?

Actually, lots of them, given the number of catches he's made, but a couple stand out, for different reasons. The game winning touchdown catch at midnight against Utah, because it won the game, and the pass cleared the Utah defender's reach by about an inch, which produced all kinds of reactions.

Here's a photo I took of another leaping, reaching catch against California that illustrate how he actually an get to throws that should have sailed incomplete, but instead was kind of a "you can't stop me" statement kind of play. He caught the tail end of the ball, after it was past his head. 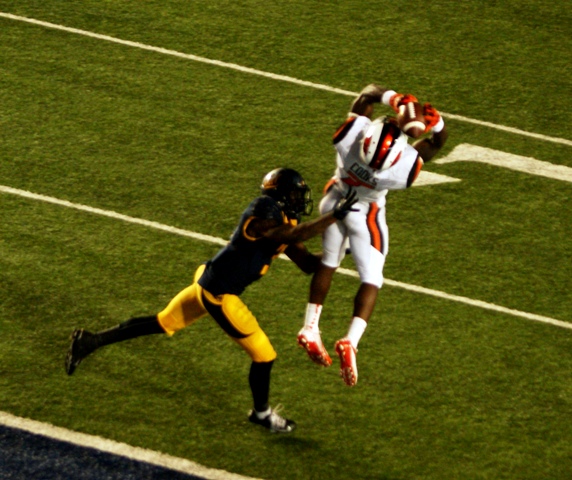