The Chiefs were butchered without a solid single-high safety throughout last season. Can our all-pro be that guy?

Share All sharing options for: Eric Berry the single-high safety: A snapshot

I've talked more about Eric Berry than any rational human being needs to.  Part of this is because he's an all-consuming force of nature who happens to play for the team I cheer for.  The other part is that for some reason, he remains a relatively controversial player.

Normally, after a player is named first-team All-Pro at his position, that tends to end the debate as to whether or not he's a great player.  The All-Pro team isn't universally mocked the way the Pro Bowl is.  It's generally taken pretty seriously.  Pro Bowler?  You're a name.  All-Pro?  You can ball.  That's the rule.  Berry, for whatever reason, is at times treated as an exception to this rule.  So I end up talking about him more than most other players (as opposed to Jamaal Charles, about whom no one disputes greatness).

I've been spending a lot of time thinking about our secondary lately.  After watching the available tape on Phillip Gaines and concluding that he'd be a good fit at free safety, I can't stop thinking about the way our safeties lined up last season.

It's become widely accepted that Berry played close to the line of scrimmage on the vast majority of his snaps.  This widely held belief has led some to conclude that Berry would be incapable of playing a more traditional free safety role, or (as would be necessary in our defense) single-high free safety.

I've never really bought this idea.  For starters, after reviewing some of the tape, I'm not ready to accept the idea that Berry was "in the box" quite as often as is suggested commonly.  In fact, it appeared to be much more typical that Berry was back as a traditional deep safety almost any time we were in our base 3-4 defense. I've reviewed a random sampling of roughly 50 snaps in our base defense, and he was back deep every time but a couple (when he was creeping toward the LOS faking a blitz).

Now, I don't have an exact number for how often we were in our base defense, but there's a pretty simple way to get a rough guesstimate.  Tyson Jackson played almost exclusively in our base defense and was active in all of the Chiefs' first 15 games of the year.  In those 15 games, the Chiefs defense had (if I'm counting correctly) 1,067 total snaps.  Tyson Jackson played 509 of those snaps, or 47.7%.

Given what I've witnessed with Berry in random selections (that he was virtually always playing back in a traditional safety role when we were in our base defense), I'm very comfortably assuming that Berry was outside the box at least 40% of the time.  Call me crazy, but that seems like a significant portion of time. Here's a picture that shows Berry lined up in a way I saw multiple times in my observations. 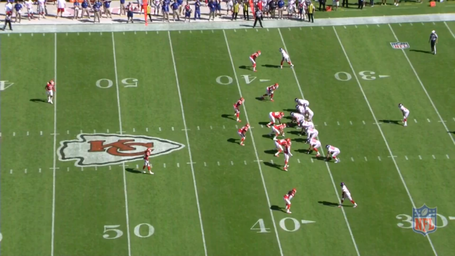 Notice that guy way, way, way outside the box?  That's our "glorified linebacker," Eric Berry.  I'm not sure I ever saw Ray Lewis lined up that deep, but I could be wrong.  Berry played center field at times, people.  It happened.  Anyone saying anything else is absolutely and utterly incorrect.

All that aside, my main issue is one of free safety.  It's a hole in our defense.  I love Husain Abdullah as a player, but I'm not sure he possesses the speed required of a guy playing deep safety (although he actually ran a faster 40 than Jairus Byrd, so maybe it's more about awareness than speed?).  Sanders Commings is unproven, as is  Gaines (and both may be a better fit elsewhere).

I keep coming back to Berry.  Now, do I think there's much of a chance he'll be considered for the position of single-high free safety?  He himself has said he could do it, but it seems like Sutton likes using him all over the field instead.

Of course, that doesn't mean I won't pine away for something different.  In my dream world, Berry would be asked to play a traditional safety role on every down, including being our guy playing deep when we go to formations that require a single-high safety.

Can Berry do that?  Well, he'd need to be able to show he's got the speed and awareness required.  Of course, one could argue he HAS shown that already.

I went back and re-watched the second Raiders game in its entirety (I really need football to start back up.  Like now), and one thing I caught that surprised me (considering the struggles our defense had as a whole that day) was how impactful Berry was on the game's outcome.  Not only did he have a pick-six, he also made an interception and return that set us up for a touchdown.  The second interception caught my eye because of the way Berry was used. 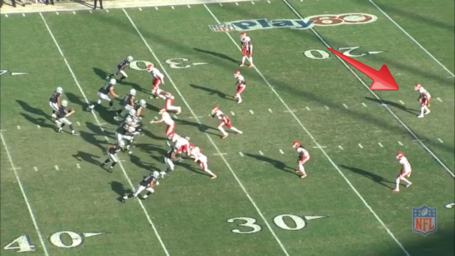 That's Berry playing single high (though he's still within about 15 yards of the line of scrimmage).  Again, glorified linebacker my eye. (Edit: we're in cover 3, so "single high" is the incorrect term.  My apologies, and h/t to Craig for pointing out my mistake in terminology)

We're also not in our base defense, so it's worth noting that Berry's snap count playing outside the box is probably higher than the 40% estimate I made earlier (unless this is literally the only time he played back outside our base 3-4 all season.  I find this unlikely, especially since he did it in our playoff game).  Anyway, here's what happens frame by frame. 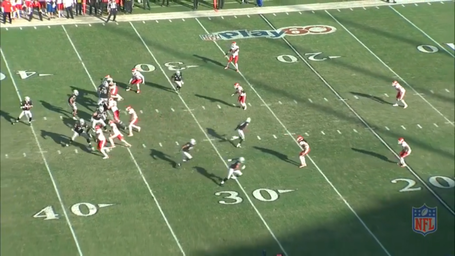 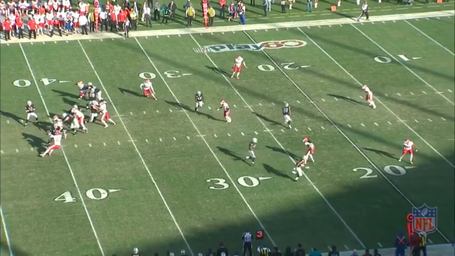 Look, there's a receiver coming open in the middle of the field!  Oh no!!!! 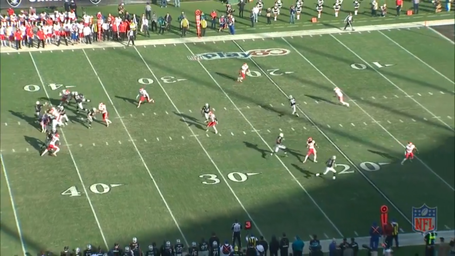 The throw is being made.  You can see Berry is breaking on the receiver.  Too late though, right? 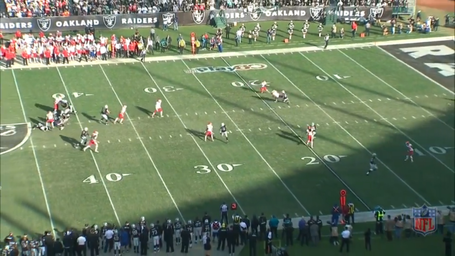 Nope. Berry covers the five-yard gap in a flash, steps in front of the receiver, and picks it off. And of course, because he's Eric Berry and he's insane with the ball in his hands, he runs it back 49 yards to the Raiders 31-yard-line. The very next play the Chiefs scored a touchdown.

One play doth not a player make.  But (if you're able) watch that play in real time and tell me Berry wouldn't be a major asset on passing downs patrolling center field.

I get that tight ends are used quite a bit in today's passing league.  But I'd argue that unless we're playing a team that uses it's TE as its primary weapon, Berry would be of more use in the back third of the field.  With his speed he would be able to patrol a gigantic area of the field, and he's proven he can make quarterbacks pay for taking chances in his zone.

All this probably means nothing in the long run, and Berry will continue to play the hybrid role he's played.  But don't tell me Berry couldn't play deep safety.  He can, he has, and he's done so well.