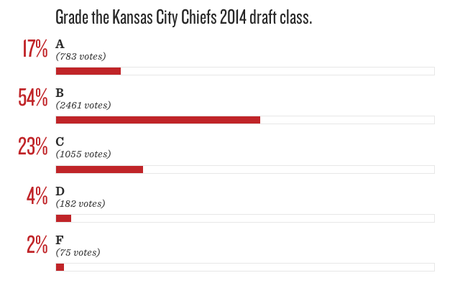 Those who like the Chiefs draft see the upside in first round pick Dee Ford's pass rush abilities, love the press man experience third round pick Phillip Gaines, see fourth round pick De'Anthony Thomas a dynamic playmaker and fifth round pick Aaron Murray as a future starter.

Those who don't like the draft see Ford as a specialist with no real role in year one, Gaines as a developmental prospect and Thomas and Murray as players unlikely to make an impact in the NFL.

Oh, and just so you know, we're aware that grading a draft class the morning after it's finished means nothing. It's still fun to read the grades so don't get too worked up over the really good or really bad grades. I learned my lesson after giving the 2012 Seahawks an F in the draft. I guess that Russell Wilson guy panned out.

...and this is how people graded them on it.

Grade: B. The Chiefs have done a nice job of adding talent to their defense with a limited number of picks. Kansas City went after De'Anthony Thomas a bit early, but the Aaron Murray pick makes a lot of sense in Andy Reid's scheme. Kansas City also got a few offensive lineman who could develop into starters down the lines. Overall, Kansas City did alright for itself this weekend.

B-. Their overall grade is hurt by the fact they a.) could have dearly used a second-round pick and only had six picks, in general, and b.) they didn’t come away with a receiver, per se. But the Chiefs still came through with a solid draft.

Losers. Dee Ford is a nice long-term gamble, but should start his career as a part-time player. Third-round cornerback Phillip Gaines seems more like a developmental prospect. Fourth-round RB/WR/return/cornerback/football player De'Anthony Thomas is a wild card. This was a draft in which the Chiefs needed some instant-impact players, and it's hard to see them here.

The rest of the group features guys that will have to fit into very specific spots, like Dee Ford as a situational pass rusher or RB De’Anthony Thomas as a Dexter McCluster-like weapon who will need Andy Reid to get creative in getting him the football. CB Phillip Gaines shows potential to be a lock-down guy down the road, and he may allow K.C. to trade Brandon Flowers now. Grade: B-minus

D. There's no doubt that Ford is a reach. The Chiefs could have moved down and still picked him. Ford also won't start anytime soon with Tamba Hali and Justin Houston in front of him. This is the worst pick of the first round thus far, but at least it's not on a Millen level.

How each team fared in the first round | cleveland.com

Nothing against the player, as Ford is an exceptional pass rusher, but the Chiefs did not have any real need at the position and would have been better served taking a receiver such as Kelvin Benjamin or Marqise Lee. Grade: C

Duvernay-Tardif is a technically-raw, mean-spirited lineman who utilizes length and powerful hands to control opponents, and is a great value here for the Chiefs who could move him inside and see him contend for a starting role relatively quickly.

Some will blast the Chiefs for not adding receivers but Andy Reid's offense is said to be especially difficult so expecting any rookie to make an immediate impact would have been a stretch. Still, I would have liked to see more playmakers added to help Smith. Phillip Gaines and Zach Fulton could carve out niches as a rookie and I love the upside of Laurent Duvarney-Tardif. A solid class but not one that I believe will keep the Chiefs from taking a step back in the AFC West next season. Grade: B-