Kansas City Chiefs TE Travis Kelce spoke to me this week about returning from his injury and his role for the 2014 Chiefs.

As Kansas City Chiefs fans continue to discuss the 2014 NFL Draft and the receivers available, keep in mind one player who could help those receivers on the outside. Travis Kelce, a 2013 third round pick, told me in a phone interview this week he hopes to be someone who can open things up over the middle of the field.

"Where I think I can come into play is I can give guys on the outside some help by taking up the middle, by being a force in the middle, moving around and trying to get the safety to lock in on me so it opens up those outside guys," Kelce said.

If you're not that familiar with Kelce, I can't blame you. He missed basically his entire rookie season with a knee injury so Chiefs fans don't know a whole lot about him at this point. The Chiefs offseason work starts on April 21, although with Kelce coming off the injury he will have to talk to the Chiefs to determine what he can do early on in the offseason program. Beyond that, he's ready for the 2014 season.

Getting to know Travis Kelce in 11 minutes

"I'm itching to get out there," Kelce said. "There's no nervousness about me right now. I've been waiting since I was a little kid to play in this league. To be in a situation where I am ...  it's a humbling experience but it's definitely in the back of my mind that I just want to be great at everything I do on the field. I'm taking it day-by-day, patiently waiting, but I know when I get out there it's going to be a full explosion and I'll just let it go."

Kelce's knee injury was actually his second of the offseason after suffering an abdominal injury before the draft. As a result of that initial abdominal surgery, Kelce said he was in a "constant struggle to get healthy." He wasn't able to lift for a period of time while recovering, which meant he had to get stronger as he entered his first NFL offseason.

"The rookie camp went well," Kelce said of last year's offseason program. "My body felt like it was starting to come back together. My legs never really seemed as strong as I wanted to but I was coming into my own and started making plays out there."

What was initially reported as a bone bruise early on was later revealed as a more serious knee injury that would require microfracture surgery in the fall. The result was the Chiefs placing him on IR, ending his season before it really began.

"Nobody wants to be injured especially when you've been waiting your entire life to play in the NFL," Kelce said. "Finally you're here, and then you get a setback where you have to wait another year." 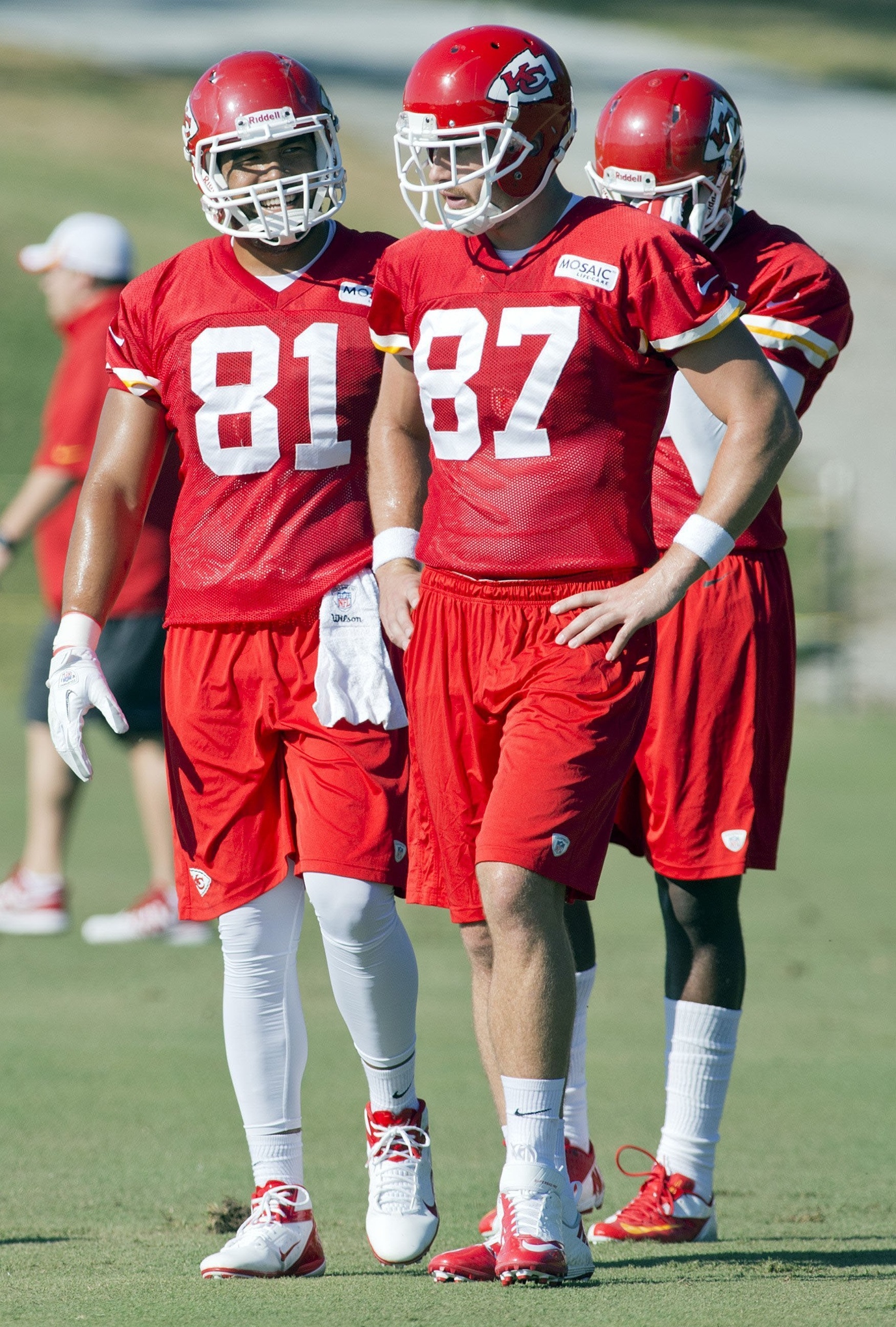 Officially, Kelce's season was over on October 12 when the Chiefs placed him on IR, the same week he had the surgery. But the 2013 season wasn't entirely lost for him. While some players rehab in other cities for various reasons, Kelce says he made it a point to stay in Kansas City, which could mean good things for his understanding of the offense.

"It was my decision to stay around the team [while on IR]," Kelce said, "still go to all the meetings, get the understanding of what it takes for a season long grind, especially with the season we had last year. It helped to learn that this is what we're doing for 16 weeks, 17 weeks, 18 weeks to have a successful season. Just to watch how guys act, the certain routine everyone goes through ... That's what it comes down to is being a professional and having a routine every single day and ever single week to stay at the peak of your game."

Kelce was lucky that he had Anthony Fasano in his tight end group. Fasano, who signed a four-year deal last offseason, proved to be a valuable veteran for Kelce.

"I'm itching to get out there ... I've been waiting since I was a little kid to play in this league." -Travis Kelce

"He's what I call a pros pro," Kelce said of Fasano. "He understands what he has to do and he knows his body. He knows the systems, he understands football, he understands defenses and how they change from game to game or the beginning of the season to the end of the season. Seeing him evolve in the offense is going to help me next year. It helped me develop my mind as a player just watching him."

Kelce has quite the opportunity coming up. He offers a different skill-set than Fasano or Sean McGrath. The importance of the tight end in Andy Reid's offense -- as detailed by Herbie Teope last year and again recently here -- isn't lost on him either.

"We had four or five guys come in and fill the position last year and really came up with huge catches throughout the year," Kelce said. "If you watched Jamaal Charles' runs, you can't help but notice the tight end is blocking on every single one of those runs, and in the run game with [Anthony] Sherman as the fullback. In the pass game, it's vital. If you have someone with speed, it's a mismatch for linebackers and big enough to be a matchup problem with safeties."
If Kelce is able to become that mismatch, the Chiefs passing attack will already be improved.