Often times, it could be as loud as Arrowhead Stadium. But at this very moment, there is nothing but silence ... It's almost eerie. The pick is announced ... and a sudden burst of sounds. Phones ringing, papers shuffling, banging on keyboards, scouts and executives yelling across the room. It's mayhem.

Odell Beckham Jr. just went off the board. The wide receiver was the Kansas City Chiefs' Plan B after Brandin Cooks (who was selected by the New York Jets with the 18th pick overall). So, what now? What is Plan C? Is there even a Plan C? Of course there is ... Trade the pick.

Joel Thorman: Hey R2J, sorry man. But you're not allowed to trade picks. I thought that was made clear.

What is Plan C? Is there even a Plan C? Of course there is! 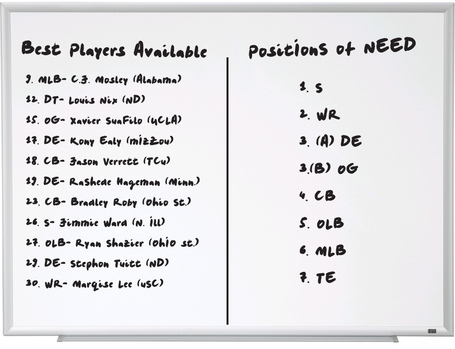 So, looking at our board here, we could EASILY utilize any one of these talented players and chances are any of these prospects have the potential to make an immediate impact on the field for this team.

At No. 9 we have CJ Mosley, who is this year's best MLB. Winner of the Butkus Award and was the Defensive Player of the Year in 2013. There are some injury concerns, but his ability and tape has allowed him to remain a top 10 prospect. Putting him next to Derrick Johnson would maximize the potential of our linebacking corps. Scouts are saying Mosley doesn't have elite speed (running a 4.7 40-yard dash), but Mosley encompasses exceptional instincts, awareness, explosiveness and plays with a sense of urgency.

At No. 18 and 23 we've got a couple of good cornerbacks in Jason Verrett and Bradley Roby. Jason Verrett is currently going against the grain of the NFL cornerback trend. He's a little guy at 5'9, but what Verrett lacks in size he compensates with outstanding athleticism and play recognition. He's extremely fast and has a bit of a chip on his shoulder. Small corners shouldn't scare us away (ummmm, Brandon Flowers anyone?). Then there is Bradley Roby, who is significantly taller than Verrett and yet still ran just as fast a 40-yard dash. He's physical and aggressive, which at times can get him into some trouble. But there is definitely room for this guy to grow and become one of the better defensive backs in the league.

Let's see what else we got here ... ah yes ... The Tamba Hali issue. We have the opportunity in THIS Draft to begin grooming Tamba Hali's replacement. And in front of us, we've got some options laid out:

Kony Ealy out of Missouri makes me raise an eye brow. Because A) he's still available and B) he's a monster. In 2013 the defensive end had 14 tackles for a loss, including eight sacks, one Interception, and three forced fumbles. Ealy is quick off the snap and is exceptional in pursuit.

Ryan Shazier is physical freak. Shazier had scouts melting at his pro day like little girls at a Justin Beiber concert. 22.5 tackles for  a loss, six sacks, four forced fumbles, all on top of 134 total tackles. Shazier isn't quite the ideal replacement we're looking for Tamba Hali or as a 3-4 OLB but still the guy is an animal.

But here is a guy who I think can be the pick. Definitely a card up the sleeve ... Jeremiah Attaochu. Played four years at Georgia Tech and amassed 31.5 sacks. 22.5 of them came in his last two years. Attaochu is relentless and very disruptive. He would fit best at OLB in the 3-4. The thing that impresses me the most is his maturity. He's got a good head on his shoulders. Reminds me A LOT of Tamba Hali. Coming from Nigeria (Tamba came from Liberia) to start a life in the U.S. and found football. Thank goodness he did. Attaochu is a consensus second round pick, but as we all know, we don't have one of those things. So, this would be considered a reach by many, but it illustrates our need to hit on our first round pick regardless of who or what position.

The Jets and Eagles snagged both our favorite options at wide receiver. But all is not lost. Remaining is the forgotten man, Marqise Lee. Had he come out last year, he would have been the first wide receiver picked and the best prospect at the position since Julio Jones and AJ Green in 2011. A major dropoff in production (due to injury and horrible QB play) did a number on his draft stock. He still managed to grab 57 catches for 791 yards (13.9 yards per catch) and four touchdowns, bringing his total numbers, while at USC to 248 receptions for 3,655 yards and 29 touchdowns.

I see Ra'Shede Hageman and Stephon Tuitt on this list. Tyson Jackson's departure created a hole at our 3-4 defensive end spot. Some consider Vance Walker to be the solution to this problem. I don't. And it doesn't matter what you think. I'm the Chiefs. So, there.

Early in the off season we were all convinced that Hageman's ceiling was enough for him to be drafted well before he made it to the 23rd pick. Some, on the other hand, considered Tuitt to be the best option to fill the DE position. And now we have both in front of us available for the taking.

Hageman's numbers will not blow you away. But it's his strength, explosiveness and ability to disrupt in the backfield that intrigues me. Tuitt is the prototypical 3-4 d-end. Long armed to play off blocks and holds his ground at the point of attack. Hageman has more upside than Tuitt.

But Tuitt could be the more sure thing (aka ‘safe') option for that spot.

Last but not least, we've got Jimmie Ward. Ward plays with a ton of intensity and energy. Reviewing his tape, Ward is all over the field and this is something you want out of your safeties. Teaming Ward with Eric Berry would be insane as both are aggressive in run support and play with the utmost confidence. Ward's addition to this team would be amazing.

I've narrowed my choices down to:

Jeremiah Attaochu shows unbelievable potential and I think he would create a seamless transition between himself and Tamba Hali. But for the 23rd pick, at a position we don't absolutely need to fill this season, it's just too far of a reach.

Ra'Shede Hageman could be a great 3-4 defensive end, but concerns about his conditioning and his lack of urgency on certain plays throws me off. Hageman is gone.

Now it's down to:

Jimmie Ward will undoubtedly excel at the next level. But I'm confident that Terrence Brooks (who is being vastly underrated) will be available in the third round. Brooks plays with the same tenacity as Ward does and if we can get him, he'll fill the free safety hole nicely. Plus, we've already got Husain Abdullah and Sanders Commings.

WE HAVE ONE MINUTE!!

CJ Mosley would be an excellent addition. And his value at this pick is off the charts.

Marqise Lee is a playmaker that makes it impossible to pass on.

CJ Mosley is a tackling machine and will put to rest any doubts in the MLB position.

At 6' and 192 pounds, he's a speedster that can torch opposing defenses while lining up at any WR spot. He's not Brandin Cooks fast, but possesses enough speed to to stretch the field and keep defenses honest and away from zoning in on Jamaal Charles or double teaming Bowe.

Not only is a downfield threat

Hard to track to tackle

A willing run blocker (which will be welcomed by Jamaal Charles)

But the kid has some fight. 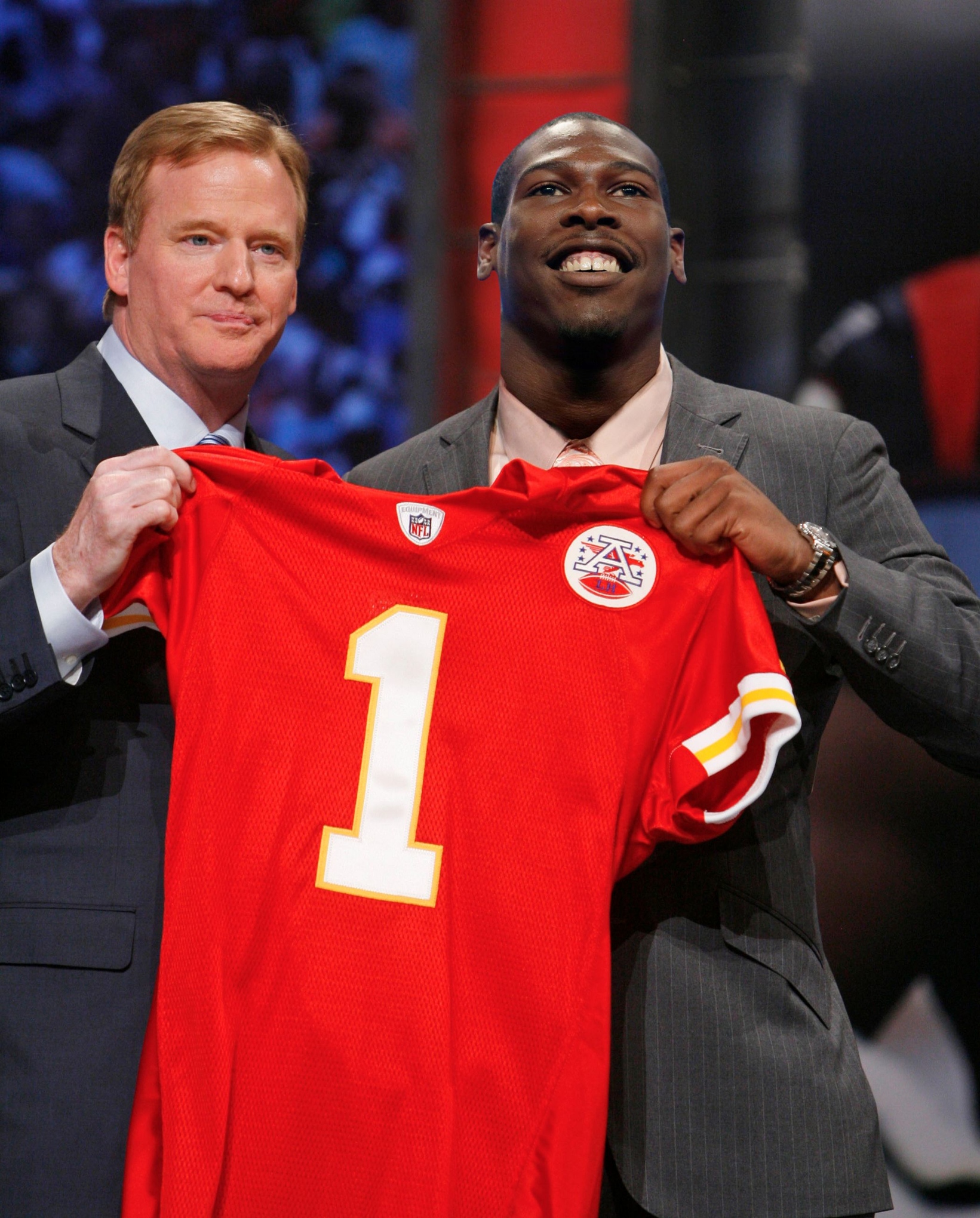