Even thousands of miles away from KC sitting at my home in California, I can hear the war chants for wide receiver intensifying as Draft day nears. There are all types of WRs that could be available with the 23rd pick (Brandin Cooks, Odell Beckham, Marquis Lee, Cody Latimer, Kelvin Benjamin, Davanate Adams) which murks the clarity of the situation into a clamor.

I've been on the Brandin Cooks bandwagon for about a month but have thought myself out from a wide receiver with the first pick altogether. Perhaps it is the sheer number of weapons for Alex Smith, perhaps the additions in Travis Kelce, Kyle Williams, Weston Dressler along with the development of Junior Hemingway and A.J. Jenkins, the reemergence of Dwayne Bowe, or just foolish ego and stubbornness that the Chiefs offense will continue its torrid pace from the second half of the season (38, 35, 45, 56, 7, 24, 44).

Perusing the last eight Superbowl champions, I thought all of them had focused on building one side of the ball and had the other catch fire throughout the playoffs. The Colts, Saints, and Packers loaded up on offense; the Steelers, Giants, Ravens, and Seahawks on defense. Assuming this is the formula to winning it all, one would have to agree that the Chiefs are much closer to augmenting its defense to an elite level than its offense.

Despite struggles down the stretch, I thought the injuries to Tamba Hali and Justin Houston were the primary reason for that. Pass rush was nonexistent and the DBs were torched. Although Brandon Flowers had nagging injuries from the get-go, Marcus Cooper hit the rookie wall, and Kendrick Lewis and Dunta Robinson were just straight up garbage, the first half and second half scores from the San Diego game were very telling; 14-3 with a healthy Houston and Hali and 24-38 the rest of the way. Let's also remember a healthy Chiefs defense held the Broncos to then a season low 27 points at Mile High.

Obviously Chiefs could use a great free safety prospect in Ha Ha Clinton-Dix or Calvin Pryor but they are likely to be selected before the Chiefs pick. This leaves us with a CB in Darqueze Dennard, FS in Philip Buchanan / Jimmie Ward, DE in Timmy Jernigan, OLB in Dee Ford / Kony Ealy.

My pick for the first pick may be a surprise but I will forgo all these names and go with the combine freak ILB Ryan Shazier from Ohio State. 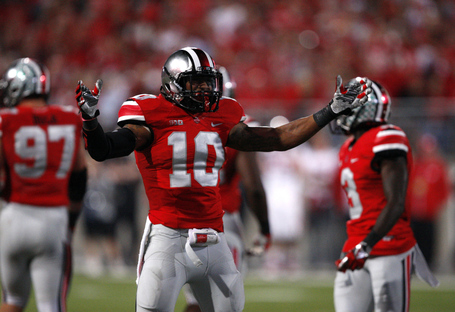 Only Hali and Houston are legitimate consistent weapons that can rush the passer. This was very evident throughout the season whether they were playing or not. The Chiefs needs another element, another depth, another speed to its attack that can keep the opposing QB uncomfortable throughout the entire game.

Ryan Shazier is an absolute physical monster, a heat seeking missile that can bring some mystery to where the pressure will come from. As much as I love Dontari Poe, I think the Chief's biggest defensive need is pressure up the middle. With Poe taking double teams play after play, the explosive and lightning quick Shazier would be free to come screaming up the middle and make the QB antsy throughout the game.

His biggest weakness as a ILB unfortunately is his struggles getting off blocks. This is where the front three, especially Dontari Poe comes in. If they can control the line of scrimmage and close off running lanes and allow Shazier to be the weapon that he is, his ability to track RBs crossing the line of scrimmage and blast them into the ground can shine. I also think a powerful man of his stature can improve his hand technique greatly especially under Hali and Houston. I believe there is good reason to expect improvement in this department from Shazier.

His versatility is another reason I would love to see the Chiefs pick him up. He can move sideline to sideline and make a play behind the LOS better than anyone in this draft, he is extremely fast and fluid in coverage for a linebacker, and he can flat out knock people out. He is an aggressive tackler and hell, if Hali or Houston were to be out for a couple games, Shazier could move over to OLB and Nico Johnson could plug in at ILB.

I just think he is one of the last piece Chiefs need on defense. He helps with the pass rush, he helps with linebacker coverage, he helps with team speed, grit, and ruthless aggression. In turn, Derrick Johnson, one of the best ILB in the league, helps him with stuffing the run, Poe helps him get free to do what he does best, and Hali and Houston help him generating pressure. When you talk about scheme, fit, and chemistry, I think Shazier is a clear winner in the first round.

Rest of the Draft