Share All sharing options for: Here's why Brandin Cooks fits the Kansas City Chiefs in the 2014 NFL Draft

We talked yesterday about which wide receiver the Kansas City Chiefs should take with the 23rd pick in the 2014 NFL Draft. We included in a poll all the regulars you hear about all the time -- LSU's Odell Beckham Jr., Oregon State's Brandin Cooks, USC's Marqise Lee and FSU's Kelvin Benjamin. The results showed Cook, my personal preference, as the winner. 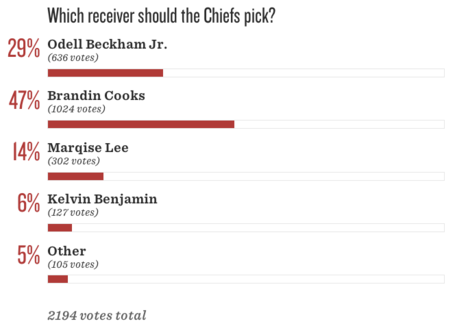 So why do I like Cooks? Production. The dude produces lots of yards and lots of touchdowns and stands out in a conference that is known for players that produce a lot of yards and touchdowns. Last season he had 128 receptions for 1,730 yards and 16 touchdowns at Oregon State. The year before that he had over 1,100 receiving yards. That's a passing league and he's breaking records. Plus, he's really fast and has a high-energy personality as evidenced by this interview.

Former scout under Andy Reid and current NFL Network analyst Daniel Jeremiah recently conducted a conference callabout the 2014 NFL Draft and laid out what Reid looks for in a draft pick and why Cooks fits the bill.

"Yeah, I mean, I haven't been around Coach Reid just for a couple years," Jeremiah said, "there's a couple words you hear over and over from him when you're talking about players, and the first one is explosive. He wholeheartedly believes in explosive plays and explosive players, and that's why I talk about getting a receiver that can really stretch the field and get you some of those chunk plays.

He wants guys that bring energy to the building.

"And then on the defensive side of the ball, guys that can take the football away, get to the quarterback, those explosive playmakers. He's always going to be talking about them and in search of those.

"And then also there's one phrase he has that he used to always talk about, he always brought up the word energy. He wants guys that bring energy to the building. It's a long season, especially you're getting into the playoffs, that's a lot of time spent together as a team, and he wanted guys that brought energy to their meeting room, to the practice field, and he thought that was contagious and it was important. You get guys not -- energy suckers, guys that are going to suck the life out of your team, he wanted guys that brought a lot of energy to the table.

"When I kind of put that together with guys in this draft, we've had a lot of prospects come through the network here for Path to the Draft, and Charles, I don't know if you agree with me on this one, but Brandin Cooks from Oregon State, he brings so much energy, and he is an explosive player. I think of an Andy Reid type of a player, to me that's the image I have in my mind is Brandin Cooks from Oregon State."