Continuing the series of early looks at the Chiefs 2014 opponents, we stay in the NFC West. Can the Chiefs beat arguably the best team in the NFC?

As a refresher, here are the Chiefs 2014 opponents.

Today we look at the San Francisco 49ers. Let's get started.

Biggest offseason priority: Getting everybody healthy

I have to admit that part of the reason I started by looking at the NFC West was so that I could get to this matchup as soon as possible. Colin Kaepernick replaced Alex Smith in San Francisco, and despite the fact that the younger QB is surrounded by much more offensive talent overall than everybody's favorite "game manager", the two have had remarkably similar numbers since the switch.

I know, I know -- it doesn't exactly fit the narrative of Smith the "game manager" and Kaepernick the "explosive playmaker" -- but there is no doubt that, statistically, Smith has performed as well as Kaepernick. Smith wins, and puts up the numbers, better than most.

The fact that he does so throwing to a group consisting of receivers as adept at catching the ball as Shaq is at shooting free throws, fourth string tight ends, and a fullback who had only 14 career touches only serves to make that fact all the more damning for those who still doubt his ability. If you still think he's "just a game manager" or anything worse than that, I'd like to invite you to come out from under the rock and introduce you to a sport called football.

Football pits an 11-man offense against an 11-man defense -- or in the Chiefs case, a 10-man defense and a warmish body patrolling centerfield à la The Walking Dead -- and this means that Smith won't get a chance to prove his superiority with Kaepernick on the field. We could argue about who is the better QB all day long, but unless they can each find a way to move the ball against the opposing defense, it won't matter any more than an illegal pick in Denver.

What does the film say?

Who has the advantage when the 49ers pass the ball?

Colin Kaepernick is not adept as a pure thrower, even though he has great ability moving outside of the pocket in the NFL, and what could conservatively be referred to as a very powerful throwing arm. His ability to make good things happen from inside the pocket on a consistent basis is not as impressive. The biggest threat he poses to the Chiefs is in his legs. Here's an example: 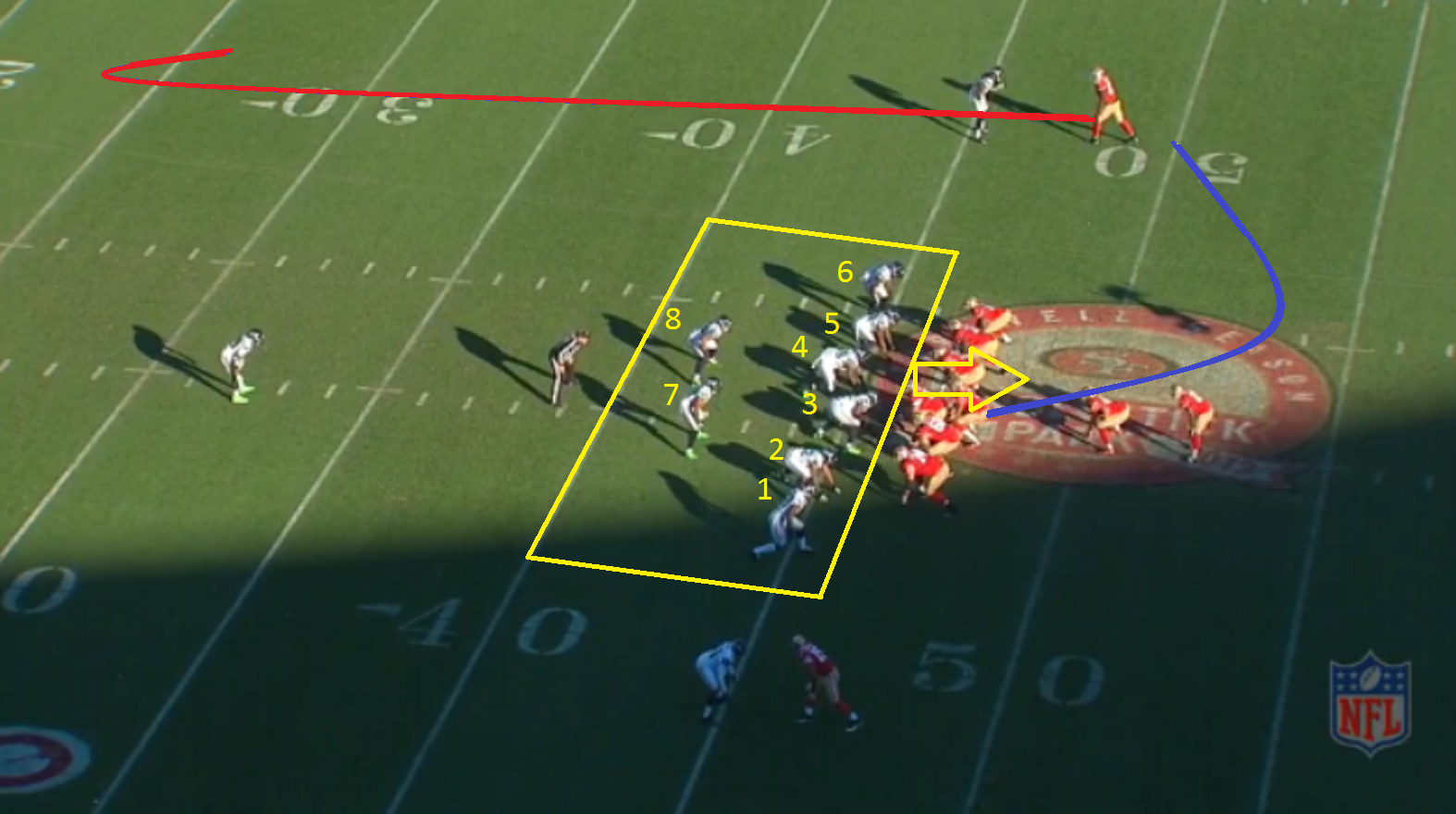 Kaepernick is quick enough to escape most pockets, but that's only half of this play. Still, it's pretty amazing that the defensive front he escapes (despite being chased by eight players) is none other than the same one that made Peyton Manning look like he should have spent less time selling pizzas. Given what we all know about Manning's unimpeachable work ethic, that's saying something.

The other half of this play is that even on the run, the young gunslinger is more than capable of throwing the ball with authority down the field. Sure, it doesn't hurt that Anquan Boldin could out-wrestle anybody in the world for a contested pass (that's really impressive). It's impressive enough, in fact, for a gain of 32 yards and a first down. When you get that result by escaping that defensive front, and going right at Richard Sherman, I'm always going to come away impressed. 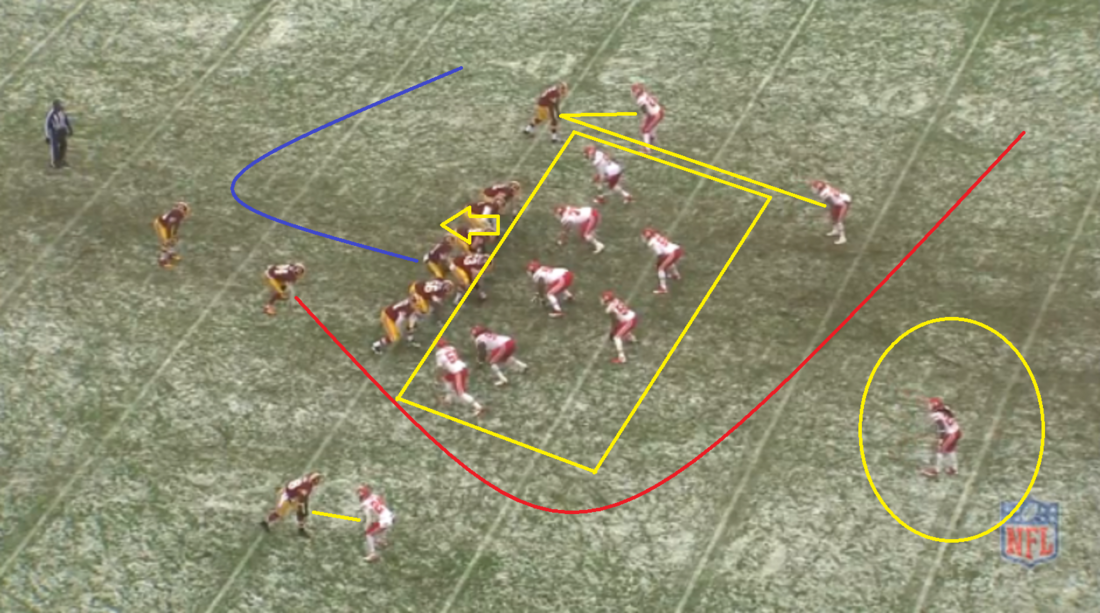 The route is quite a bit different, but the lack of collapsing the pocket leading to a big play is pretty much exactly the same. The only difference is that the Chiefs rushed one less defender than the Seahawks did on the previous play. There isn't much to say about this -- the Chiefs struggled to defend against the kind of play the 49ers like to run.

As good as the Chiefs were this year at rushing the QB, they struggled pretty consistently to contain mobile passers and keep them from escaping the pocket to extend the play. That's a really bad sign against the 49ers.

Who has the advantage when the Chiefs pass the ball? 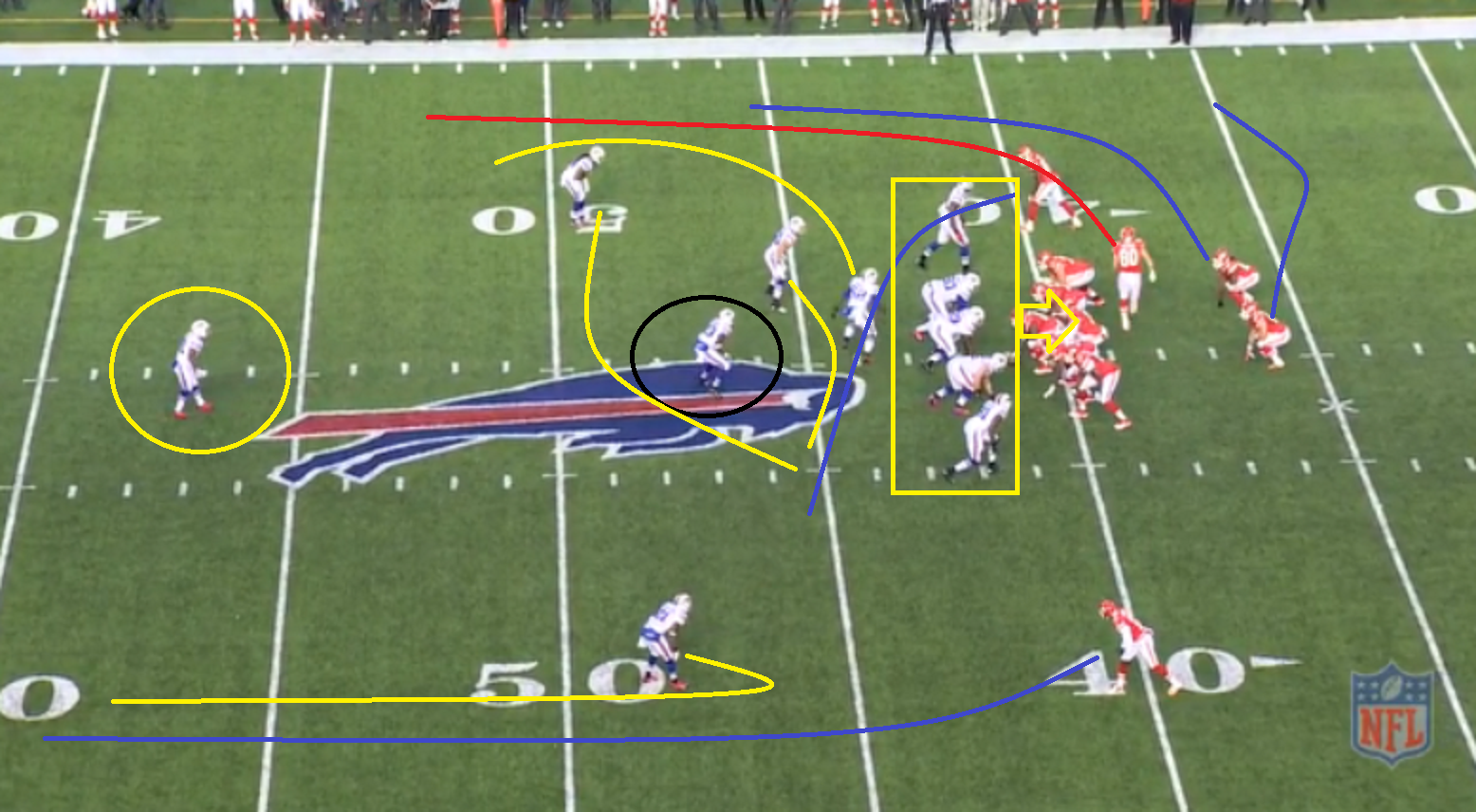 This play works very well, due in no small way to the effectiveness of Andy Reid's varied offensive. All of those swing passes to Jamaal Charles and quick slants to Dwayne Bowe set the Bills up for failure on this play. As soon as they bite on the routes they think the Chiefs want to run, Anthony Fassano runs to large patch of open space and Alex Smith hits him for an easy 20 yard gain. Basically, the Chiefs beat an attacking defense by using their best players as decoys to create space. 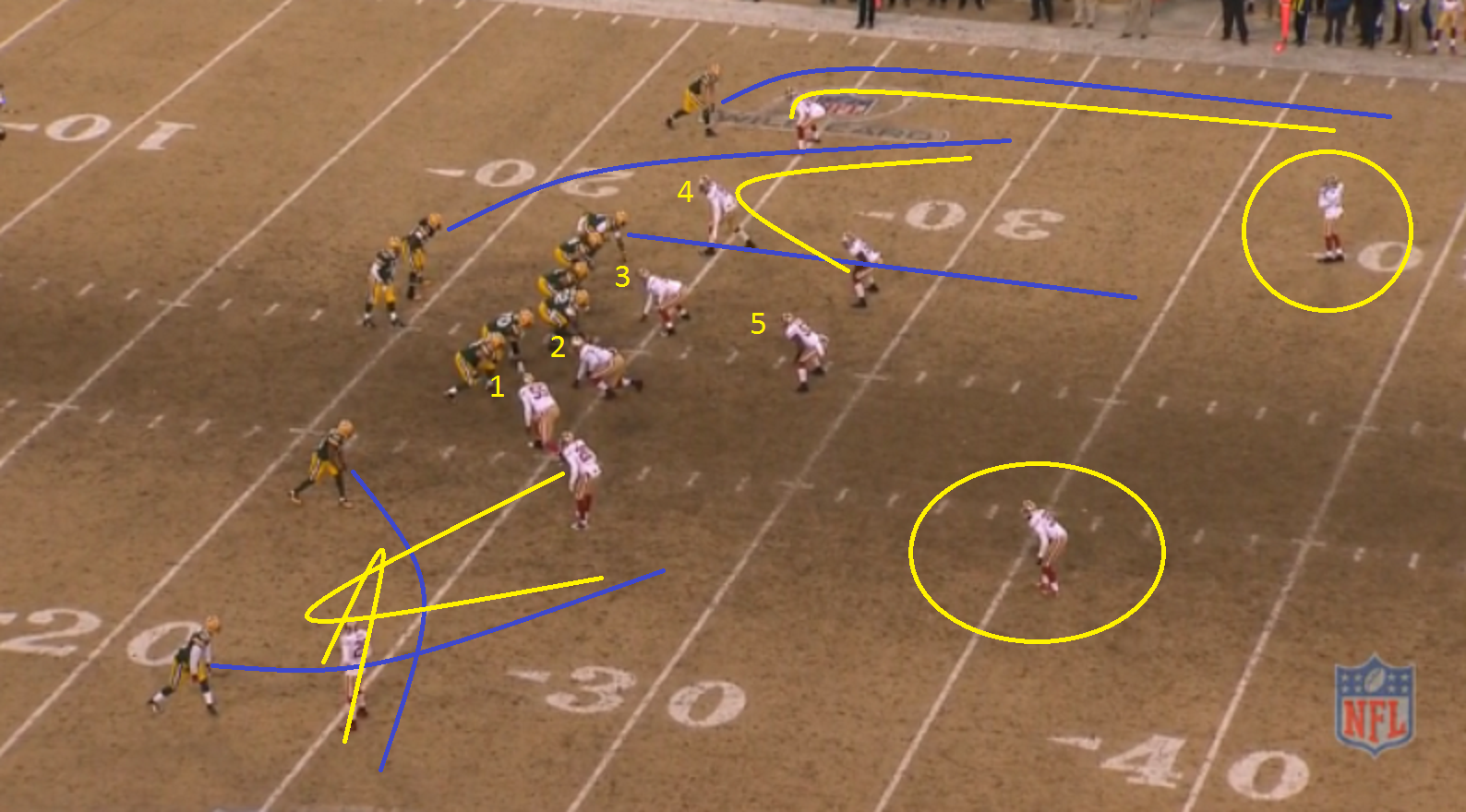 On this play, the Packers tried to do what the Chiefs did on the last play. They use their regular target as decoys, and the first look is to Eddie Lacy, who is not normally a threat to do damage in the passing game. The problem they ran into is that the 49ers were both too smart in the secondary to get beat on the crossing route and too good up front to allow Aaron Rodgers to have either space or time to throw the football.

The 49ers are good at forcing the offense to react to them, rather than things happening the other way around. Until the Chiefs prove to be a little more deadly in the passing game, they won't be able to beat such a defense on a consistent basis.

If you told me that you thought Jamaal Charles and Frank Gore were two of the top five backs in the league, I wouldn't waste any time arguing with you. That alone would make this matchup an interesting one, but there's a little more to it than that.

The 49ers are good defensively, but are better at winning the battle against power backs than against quicker backs like Charles. The Chiefs are worse defensively, but better at stopping someone like Gore than a quicker runner. To illustrate this point a little better, let's take a look at the film.

Who has the advantage when the 49ers run the ball? 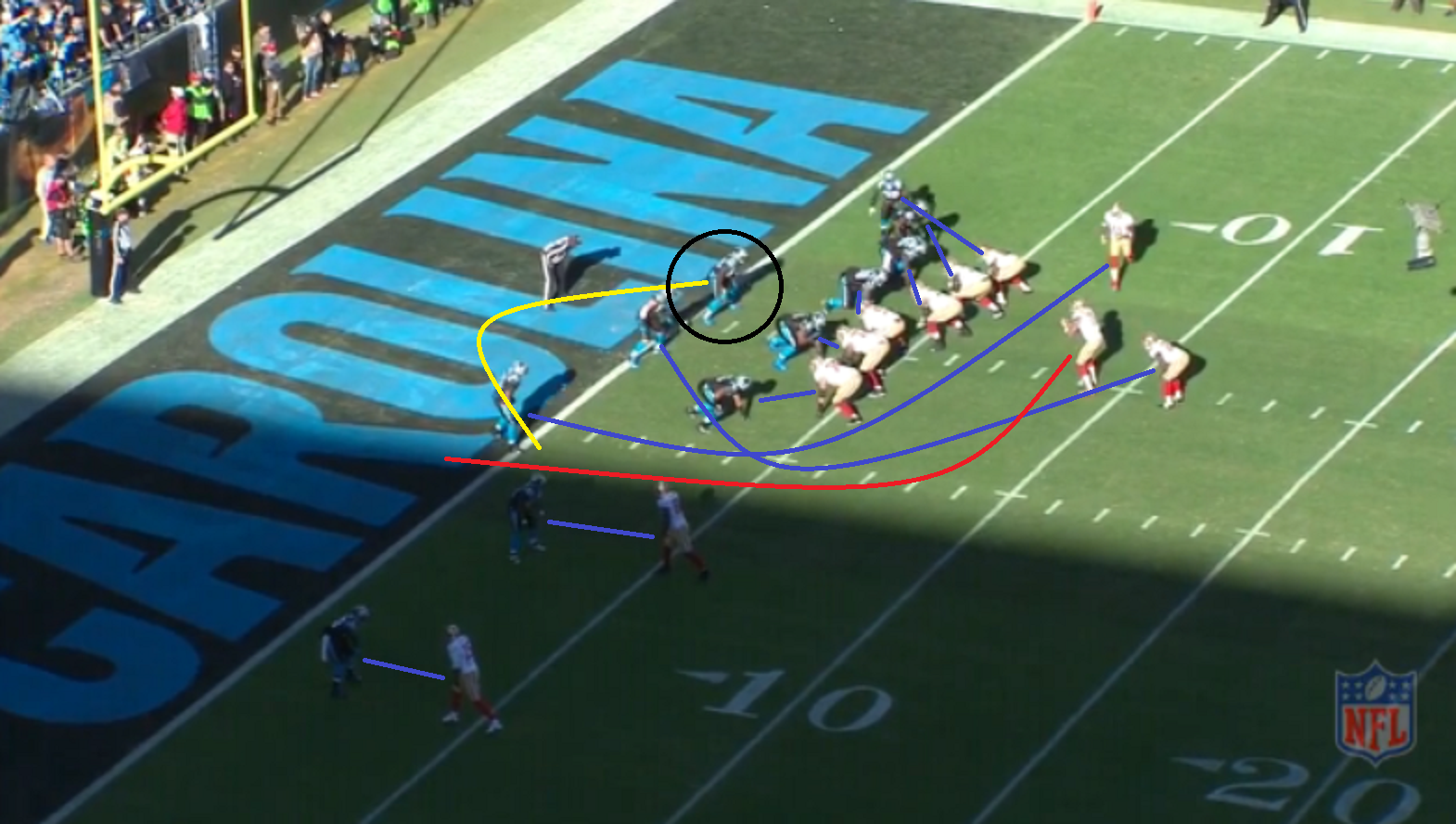 You know how much the 49ers care if somebody is really good at stopping the run? About a much as Vladimir Putin cares about anything that isn't wrestling bears. They're big, strong, athletic, mean and they like to run the football down your throat.

On this play, the blocking is excellent, and Kaepernick finds enough space and is patient enough to score six points against a team isn't used to seeing that happen. Frank Gore could have something similar, but that's what makes this team so special. They have a number of ways to break your will on the ground. 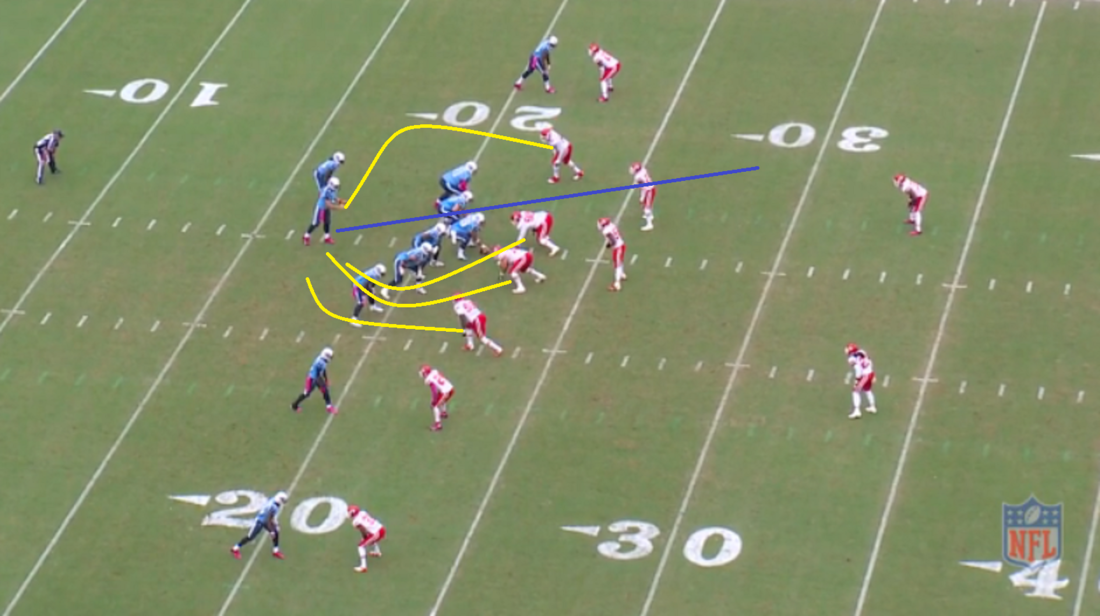 One of the things QB Ryan Fitzpatrick does not do well is outrun people. Don't get me wrong, he moves around pretty well for an NFL QB, but he shouldn't be gaining big chunks of yards on the ground. Somehow, the Chiefs let just that happen when they played the Titans early this year, and it wasn't the only time they gave up easy yards in that way.

Who has the advantage when the Chiefs run the ball? 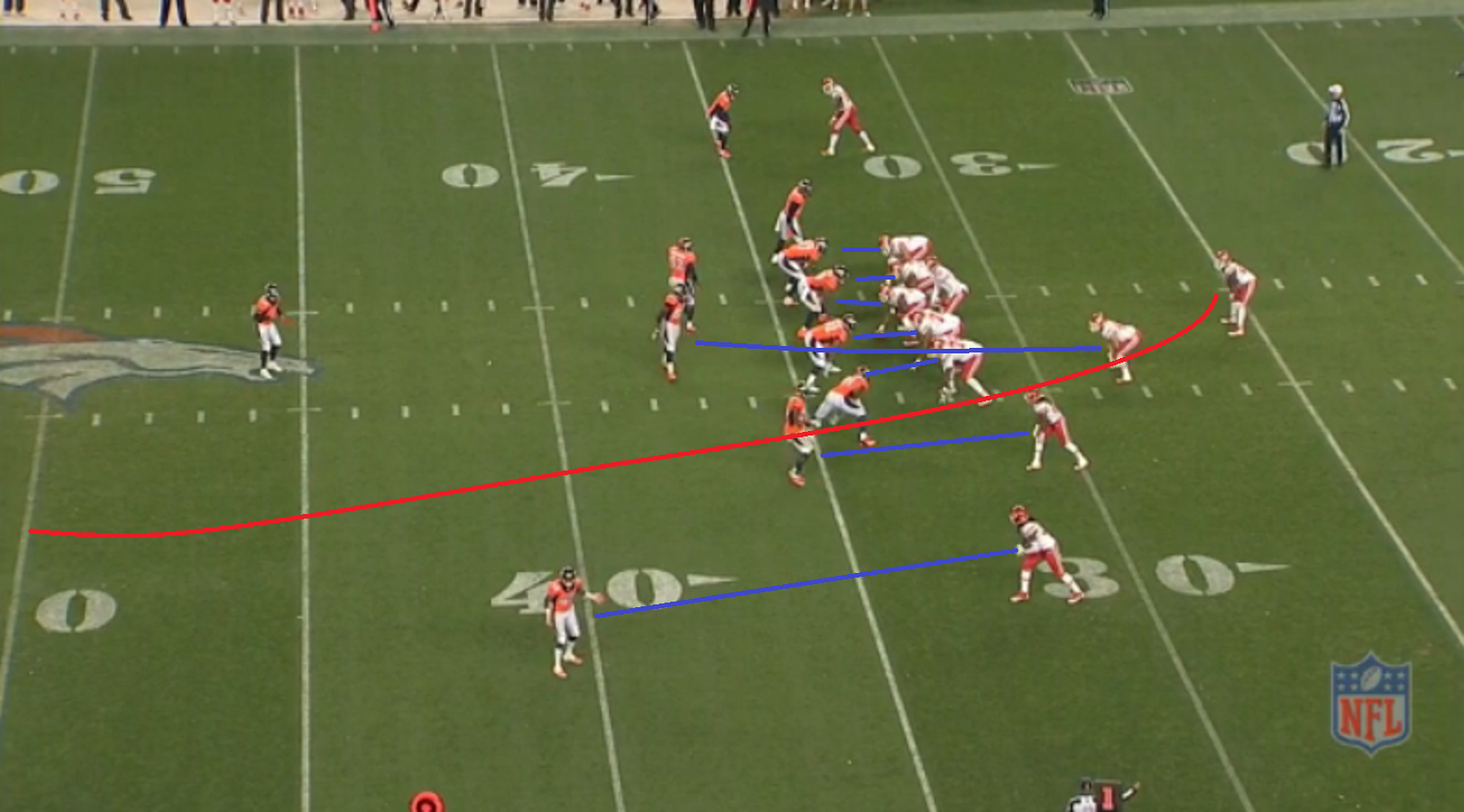 I thought about leaving out some of the blocking lines for this play, but I left them in to illustrate just how simple the Chiefs offense is. The Chiefs don't need tricks to run the football. The Broncos were actually one of the better teams in the league this year at stopping the run, but Jamaal Charles is thoroughly unimpressed by that. You'll notice the Broncos have an unblocked safety on the play, which would matter at least a little if he was one of the few living beings capable of outrunning Jamaal Charles in the open field. The result is a 35 yard first down run. 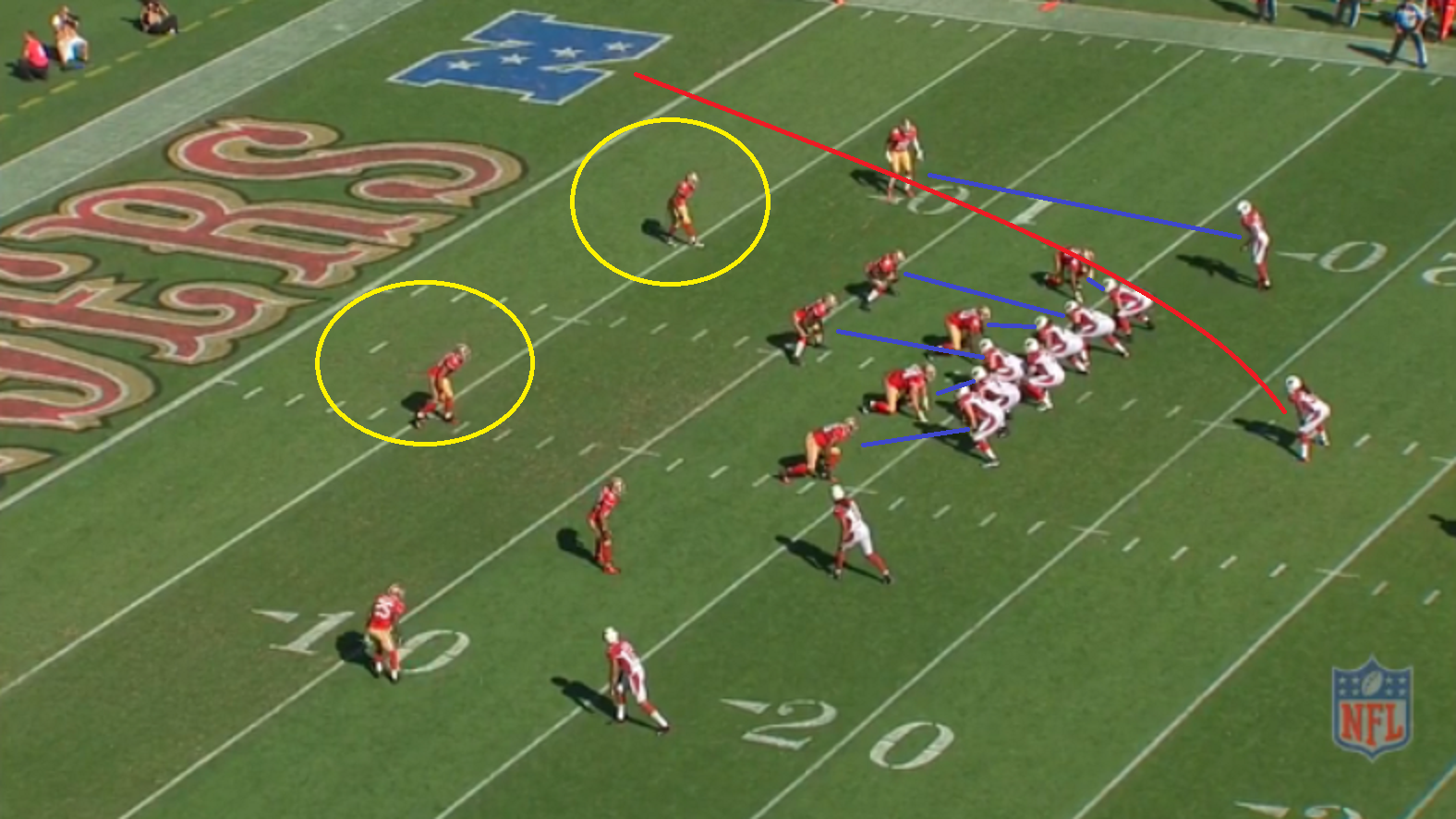 The 49ers are really good at beating people into the ground -- when they can catch them, that is. Andre Ellington is quick enough to run for a 15 yard TD on this play, and that's saying something since the Cardinals are a really bad running team. The 49ers don't give up 100 running yards very often, and they do so against bad running teams even less often. The key is being fast enough to run past them. If only the Chiefs had somebody that was really fast...

This one is really close, and I'm tempted to say it's an even matchup, but I like the Chiefs chances based on Charles speed.

Who has the advantage on special teams?

I won't rehash this every week, so if you want to know exactly how I feel about the Chiefs special teams, refer to this.

Who has the coaching advantage?

Your feelings on this topic will vary depending on whether you prefer experienced coaches or coaches who are ridiculously accomplished for their young age. Personally, I give a slight edge to Big Red here. But it's really, really close.

Who has the overall advantage in this matchup?

Look, I really want to say the Chiefs can win this game, but that would be a lie. I know they'll be improved next year, especially with Travis Kelce playing on offense, but I just don't think it'll be enough to win a road game against such a quality opponent. If they show a huge improvement early in the season, I may change my tune a little, but for now, the 49ers are just a better team.