Poll results: Marcus Cooper should be Chiefs rookie of the year

We asked you who should be the KC Chiefs rookie of the year. The poll results say it all.

Share All sharing options for: Poll results: Marcus Cooper should be Chiefs rookie of the year

The MVP is obvious, it's Jamaal Charles. And if it's not, it will be the clearest sign of a rigged vote in voting history. Greg Schiano would be proud of that voting fraud. 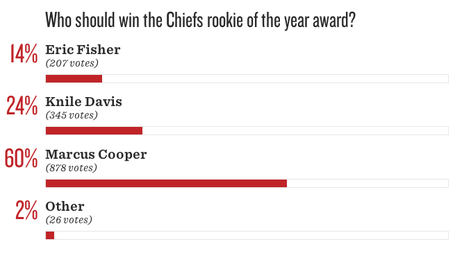 1,500 votes is nothing to sneeze at. I'd say the voters have spoken. I am not surprised that Cooper was the winner here because was among the best in the league at his position for a period of time and Fisher or Davis can't say that. Cooper's season was obviously not all good, which is why this poll was necessary and he isn't as obvious a winner as Jamaal and the MVP.

I am surprised at the results for Eric Fisher. I believe what's influencing some voters is that the expectations on Fisher as the No. 1 pick were much higher.

The Chiefs will be making the announcement on the winner tonight. We'll see if the AP voting results hold up.