What can the Kansas City Chiefs copy from the Seattle Seahawks?

Peyton Manning and the Broncos offense set records for 18 games this season - and then almost got shutout in the 19th game. How did the Seahawks make that happen?

Share All sharing options for: What can the Kansas City Chiefs copy from the Seattle Seahawks?

The Broncos and their QB set records all season long, and yet when it mattered the most, Peyton Manning and company managed to score 8 points. While Denver didn't play their best game on Sunday, most of their shortcomings were the result of a brilliant defensive game plan devised by the Seahawks. Seattle didn't let the record setting offense play to their own strengths, and the result was a beatdown for the ages.

The good news for the Chiefs and their fans is that everything the Seahawks did to stop the Broncos in key situations is something the Chiefs defense can emulate with some offseason work. Looking at the video from the game, their was one key thing that kept leaping off the screen for some of the best Seattle defensive plays.

Here's how the Seahawks defense lined up with the Broncos facing 3rd and 5. It starts with 5 defenders in coverage short of the line to gain. The key, however, is that none of the defenders who could potentially be picked by a receiver are playing close enough for such a block to be legal. Only Byron Maxwell (5th defender, at the top of the picture) is playing press coverage, and he's far enough away from everything except his assignment that there's little threat of getting beat on a screen block from another offensive player. 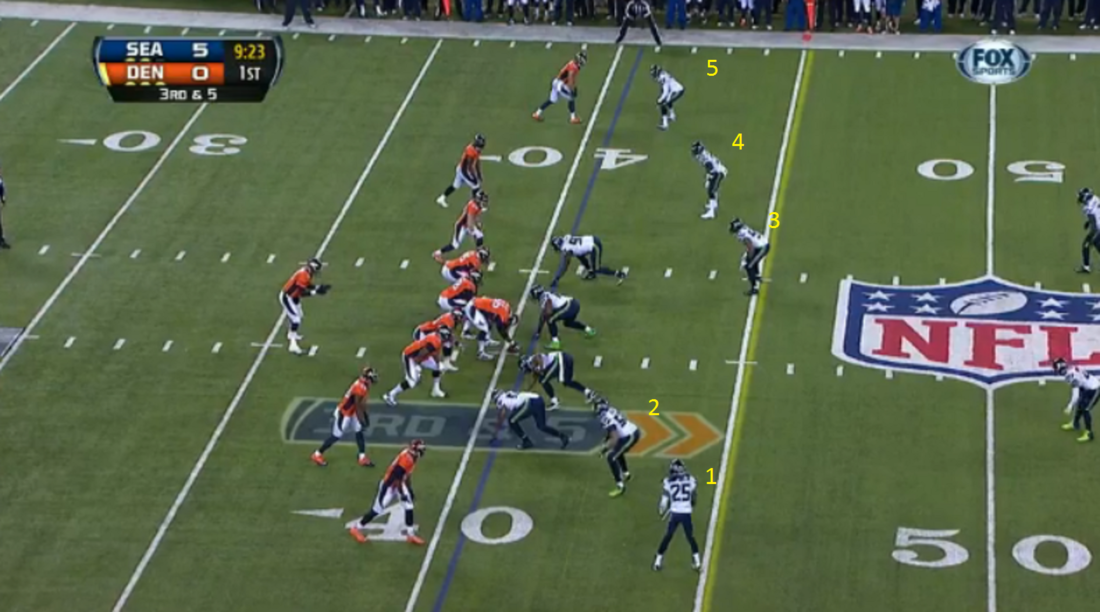 This is where it gets simplistically brilliant - a 6th defender is about to drop into coverage short of the line to gain. 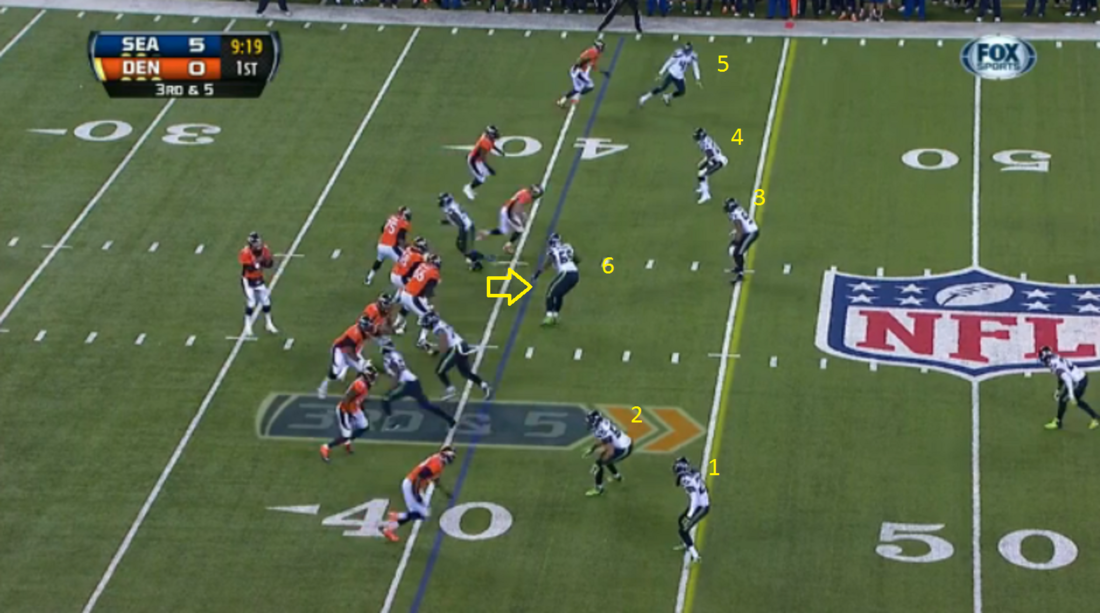 So as Peyton Manning looks out, he now sees 8 defenders in coverage, 6 of whom are between his 5 receivers and the 1st down marker. Now, not only are the numbers not in his favor, but one of his most effective tools -- the use of picks set by his receivers for one another -- is about to be taken out of his arsenal, too. 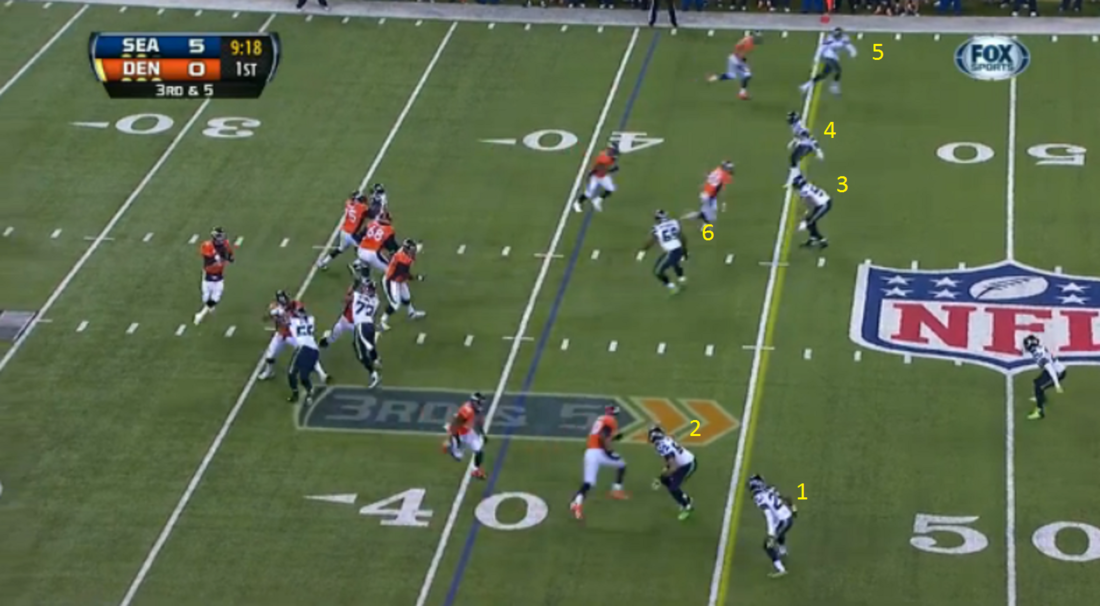 Richard Sherman (1 in the picture above), who began lined up across from Julius Thomas, plays a part in two things that stop this play from being successful. First, as previously mentioned, he's playing far enough off of Julius Thomas that when he and Demaryius Thomas cross -- Julius cuts inside to run a (poorly executed) drag route -- Sherman isn't in a position to be picked by Demaryius. The second deciding factor is that regardless of how close he was playing to the line, Sherman was covering Demaryius Thomas the whole time anyway, and K.J. Wright -- who is in much better position to defend an inside route -- forces Julius Thomas, who is running a drag route, to cut the corner on his route, as Wright makes his way over to double up the outside route with Sherman.

This works well for a few reasons, and in a a number of different ways. It works by design, because with the sixth man dropping into coverage in the middle of the field, Wright and Sherman can afford to double up on the outside route. It also works in execution, because at the moment Peyton Manning is looking at his TE -- hoping that his WR may have picked Sherman already -- Wright is forcing the route to the inside earlier than Manning was expecting, leading the QB to believe that his first look is covered even better than it is. 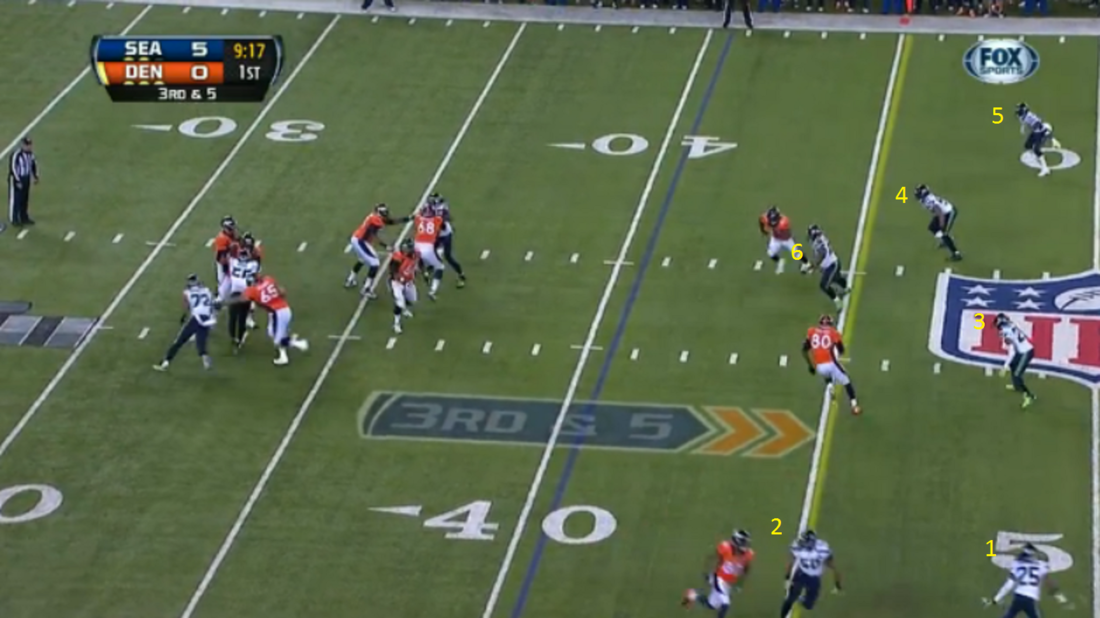 Basically, the Seahawks beat a crossing route by putting double coverage on one side, and dropping 4 players into short coverage on the other side -- and by doing it all without tipping any of it to Peyton Manning before the snap. The result was a forced punt on a short completion. How did the Chiefs defend in a similar situation?

Let's look at a 3rd and 4 play from the Chiefs game in Denver on November 17: 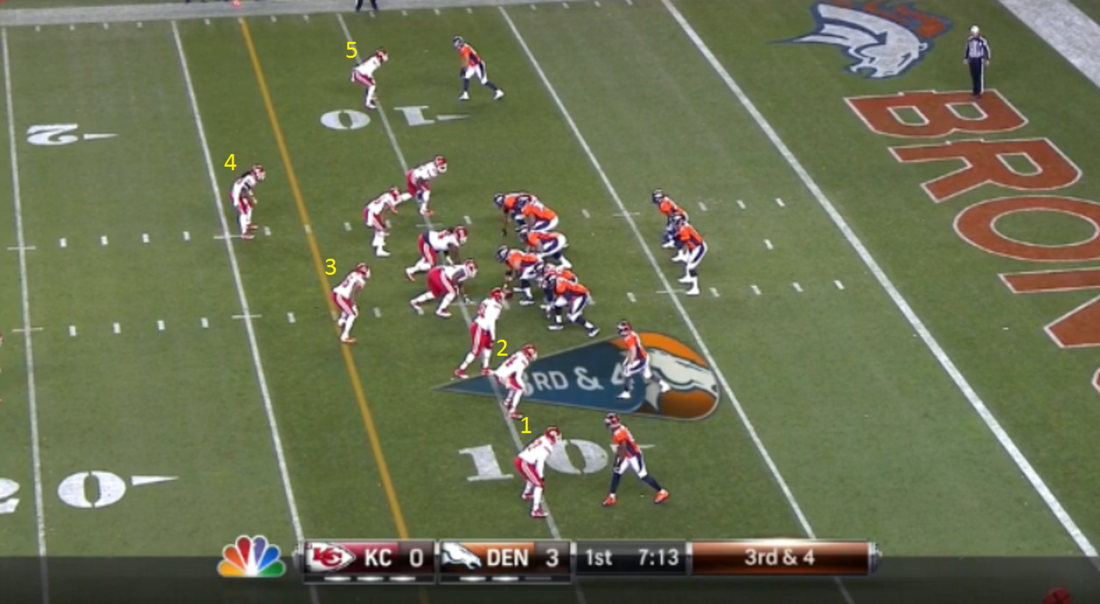 At first glance, there are a number differences between the way the Chiefs defended the play, and the way the Seahawks did. Both teams put 5 players in coverage near or in front of the line to gain -- and that's the only thing that's similar. The Chiefs are playing press coverage, and straight up man-to-man, on all of the receivers. In addition, there's only one safety to provide help in case of a screen or pick, and he's so far behind the play that any breakdown in the press coverage spells doom for the Chiefs. Finally, as we're about to see, a potential 6th coverage man instead becomes the 5th pass rusher -- which doesn't help at all when the other team is running a quick "rub" route. 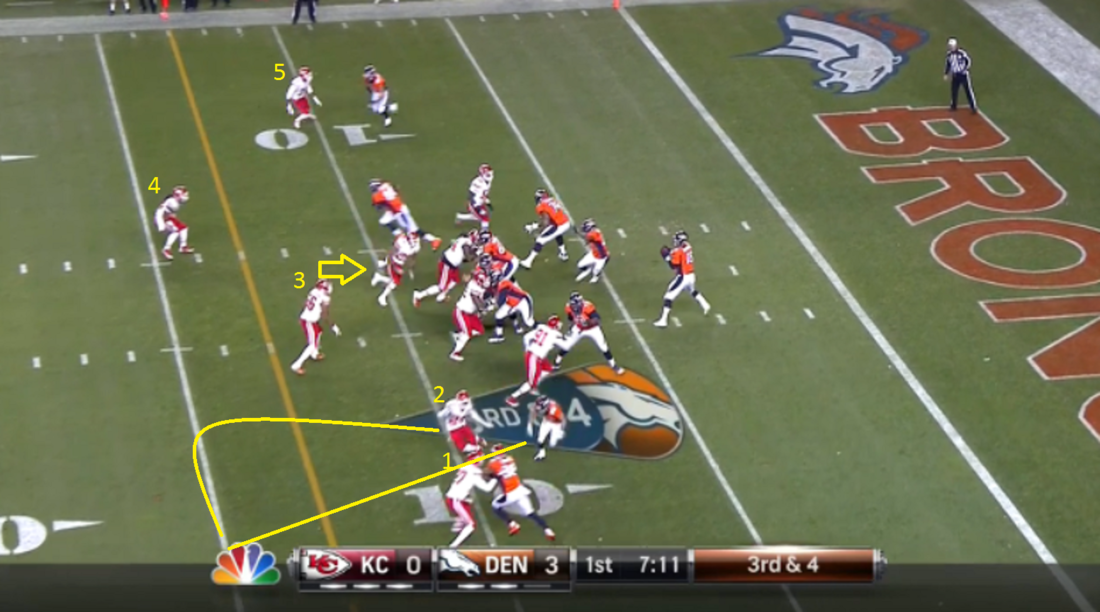 First, the Chiefs lose one potential coverage defender when he blitzes, which is a bad idea when your opponent likes to throw screens and run rub routes -- bad because he'll likely not reach the QB in time, because the ball is leaving his hands quickly. The bigger mistake, however, is that both defenders on Manning's left side are playing so close to the line that when Demaryius Thomas picks Sean Smith at the snap, Brandon Flowers is also effectively picked as he attempts to cover the crossing Wes Welker. Welker is quicker than Flowers anyway, but when he gets to take a straight line, while Flowers runs in a seven shape, the mismatch is even greater and leads to this: 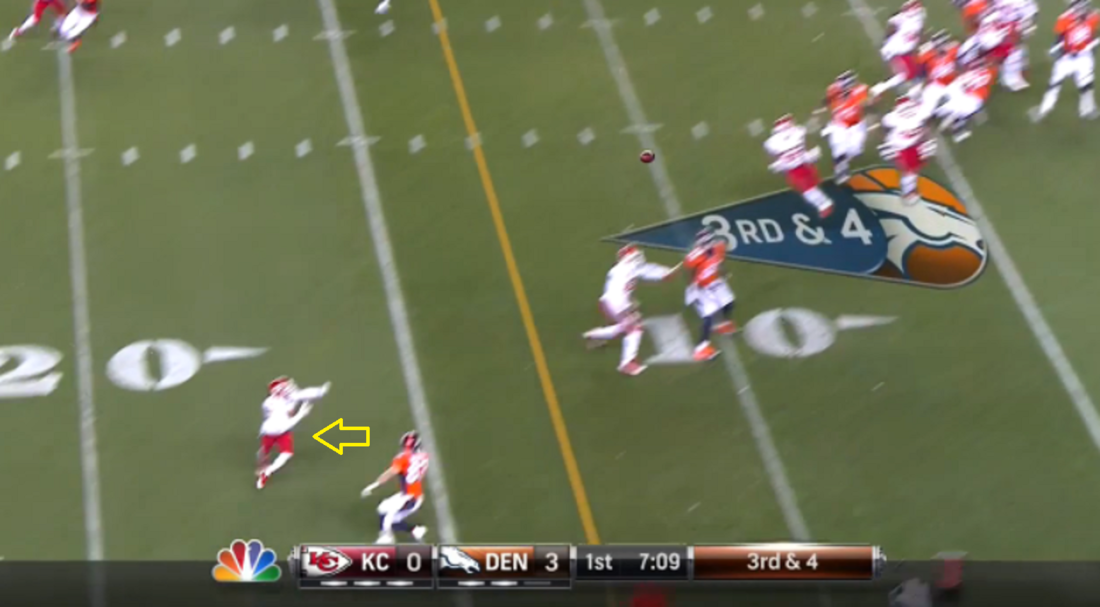 I included the arrow because at this point --with the ball already halfway to its target -- Brandon Flowers is still moving downfield, and has just begun to turn his body toward the open receiver. It was his only option, really, considering that he had both vertical and horizontal ground to cover, and covering the horizontal ground more quickly would have likely led to a TD pass over his head. He doesn't make it in time -- first down Denver.

In this play, the Chiefs made the mistake of enhancing their opponent's strength when they allowed the Broncos to put them in reaction mode. When a defender is forced to play reactive, rather than proactive, defense against a faster player, the result is always going to be bad. Knowing the Bronco's tendency to run these kind of plays, the Chiefs should have left at least one coverage defender on each side of the play far enough from the line of scrimmage so that they couldn't be picked at the snap.

Here's another example of the Seahawks 3rd down defense on Sunday, with the Broncos facing 3rd and 7: 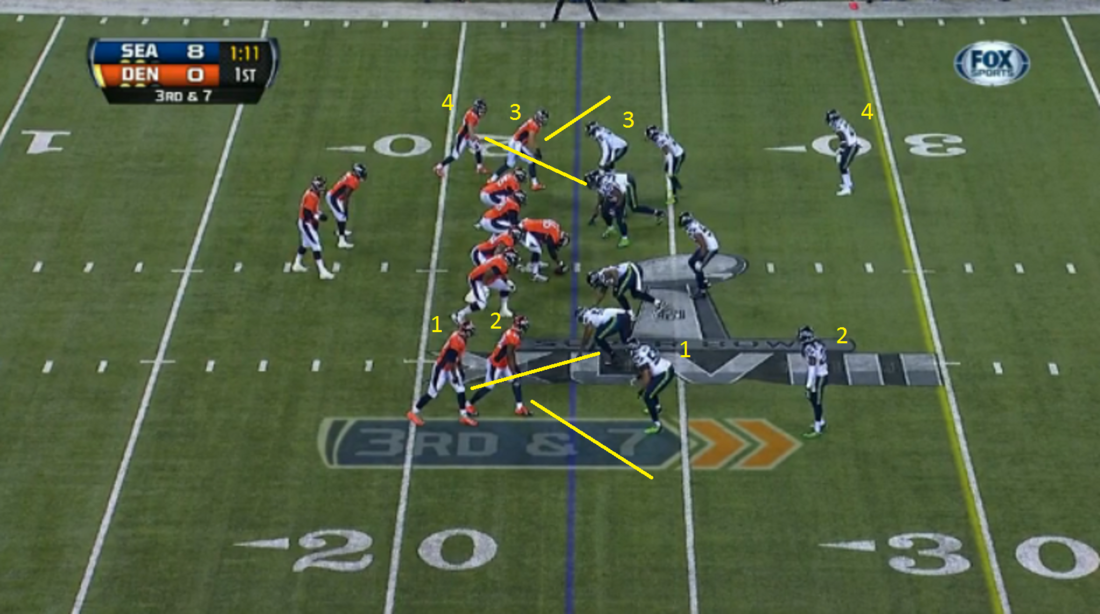 The Seahawks once again disguise their intentions very well, and in addition to the 4 defensive lineman, they send 2 of their potential coverage players on a blitz, leaving Peyton Manning with a mismatch for his offensive line that he was unable to diagnose at the line before the snap. The 4 players who are in coverage are split evenly between press coverage and some deeper man coverage, which once again protects them from getting beat by a receiver pick. The included numbers for offensive and defensive players match each coverage defender with their assignment. 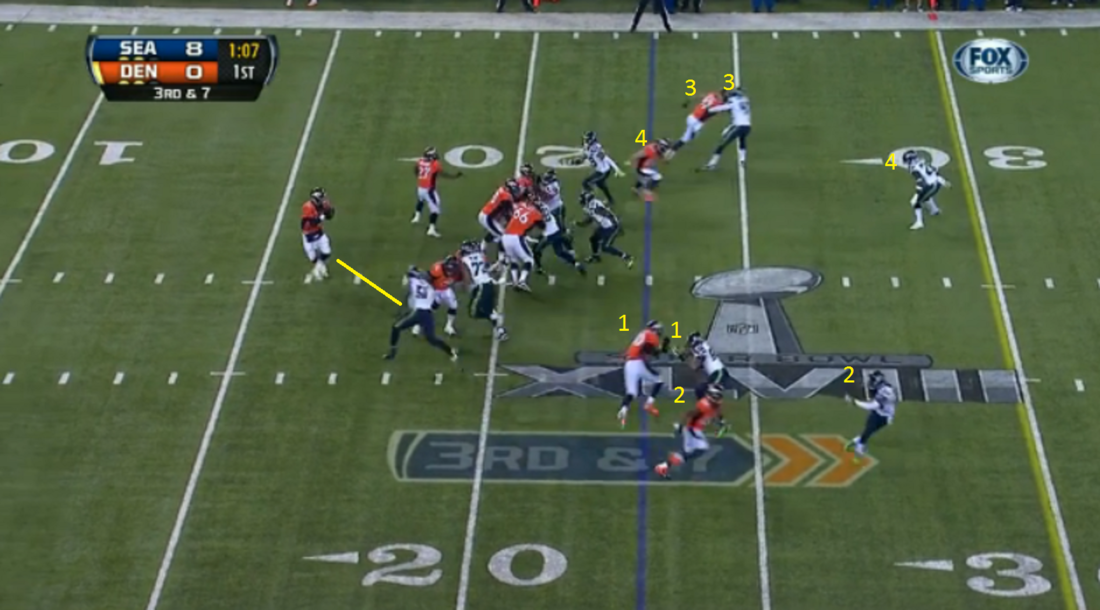 Now, the brilliance of the defensive scheme in the first picture is even clearer, as not only are none of Seattle's players picked as the play develops, but all of the Denver receivers are either engaged with a defender or have a defender standing where they want to run. It also certainly doesn't hurt that one of the six pass rushers now has a clear lane straight to Peyton Manning, who is not mobile enough to buy his receivers any time to get open. 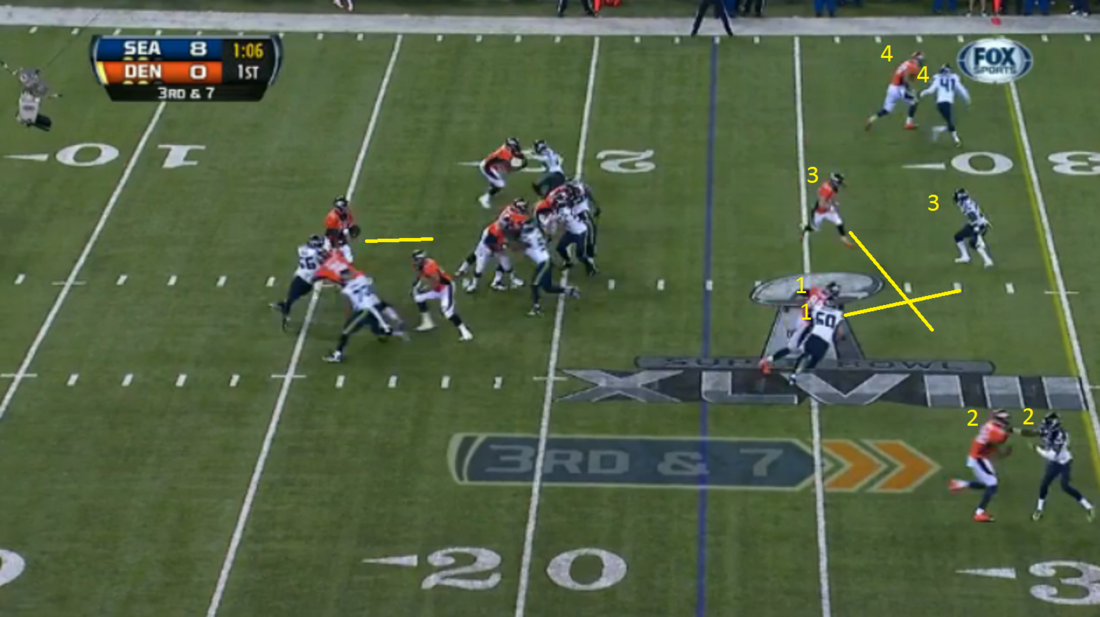 Peyton Manning is now at the point that he has to either get rid of the football, or take the sack. As he did with each of his other turnovers as well, Manning makes the mistake of trying to force something to happen, without enough time to do so. He steps up into the rapidly shrinking pocket for a little extra time as he attempts to throw to Demaryius Thomas over the top, knowing that Wes Welker is about to take his defender away from his currently deep position.

In his hurry to do all of this, Manning seems to forget that Kam Chancellor is still patrolling the deep part of the field, and it doesn't help that he throws one his patented Manning ducks. The result of the play is an interception.

If they want to win the AFC West next year, the Chiefs must devise a specific defensive scheme to stop the Broncos. Even if they improve their personnel enough for their straight man-to-man press coverage to be successful against other NFL teams, it still won't work against a team like the Broncos that wants to run picks and screens. The NFL has made it abundantly clear that they have no intention of (correctly) enforcing the illegal picks as offensive pass interference, so the Chiefs must plan accordingly.

Whether the Chiefs draft a FS, WR, DE, or any other position in the first round, Bob Sutton and the Chiefs defense will have a great deal of work to do if they want to beat the Broncos next year.