With the combine over, the mock drafts gain accuracy and heat up as we head toward March and free agency.

The NFL offseason always comes in waves of intensity. The first strong wave, without question, is the NFL Combine. In Indianapolis, all hell breaks loose as 32 teams scramble to Nap City, hoping to discover a diamond in the rough and further some evaluations in the meantime.

At Lucas Oil Stadium, the separating of players begins. There are the players who completely bomb the proceedings, offset by those who rise to instant Underwear Olympics stardom. It's the nature of the beast, every single year.

With the combine behind us, we now have a clearer picture of where some of the best talent in the land might be headed this May.

Manziel is the biggest name in this draft, and has the talent to back it up. He has been putting pressure on Houston, and it will matter in the end. Manziel will stay in his native state, book it.

If the Rams end up staying here, they will replace Rodger Saffold on the right side with Robinson. While Robinson could step in at left tackle, he can man the right side to bookend Jake Long. Suddenly, St. Louis is nasty in the trenches on both sides of the ball.

Bridgewater is the most polished prospect at the quarterback position. Some will mock Clowney here, but it won't happen. The Jaguars absolutely need a signal-caller and will get one with this selection.

Bortles looked good at the combine, helping his already healthy stock. It's impossible to imagine the Browns not selecting a potential franchise quarterback. Then again, he's not 29 years old, so maybe they pass.

You figured I was putting Clowney here. Well, that would make sense right? Which is exactly why Oakland will take the flashy offensive weapon. With the questions about Clowney's want-to, Watkins is the surprising pick.

Clowney doesn't fall any further than this slot. The Falcons need a disruptive force in the worst way on defense, and Clowney should provide that. Atlanta takes the ultimate chance here on a kid that could be a massive bust or the next Bruce Smith.

*Let it be said, I would not touch this kid. His tape shows an appalling lack of competitiveness. I don't care that he wanted to leave college a year ago, you still give it everything. The great ones are always, always competitive.

Matthews give the Buccaneers some help up front to pave the way for Doug Martin and protect Mike Glennon. Tampa Bay is a prime candidate to turn around its fortunes quickly with a talented roster and a good head coach at the helm. Sound familiar?

This is too early for Carr, but the Vikings can't afford another season of Matt Cassel, Christian Ponder and Josh Freeman. Carr has nice potential, and although it's a reach you can't blame general manager Rick Spielman, who needs to make a push this season to save his job.

Mack, in my opinion, is the best defensive player in this draft. For the Bills, this is a Godsend if he falls to them. Mack can really fill out an already dangerous front seven with the likes of Mario Williams and co. Add that he played college ball in Buffalo, and it's a beautiful fit.

Dennard is the best cornerback in the draft along with Gilbert, and shows ample promise. The former Spartans star specializes in press-man coverage, something that will come in handy against some of the bigger receivers of the NFC North.

Mosley fills a need and is perhaps the best player on the board remaining. Mosley is a three-down linebacker who can cover and play solid run defense. He would be a nice fit in Tennessee's defense for new head coach Ken Whisenhunt.

The Giants are moving on from Justin Tuck and hoping Jason Pierre-Paul becomes the player he was in the Super Bowl season of 2011. Ealy would be a nice pick by general manager Jerry Reese to help get some pressure on opposing quarterbacks.

Evans is built like a brick house and would be a nice option for Sam Bradford. After taking Tavon Austin last year, Evans would provide an outside threat with Austin left to run underneath against slot corners. 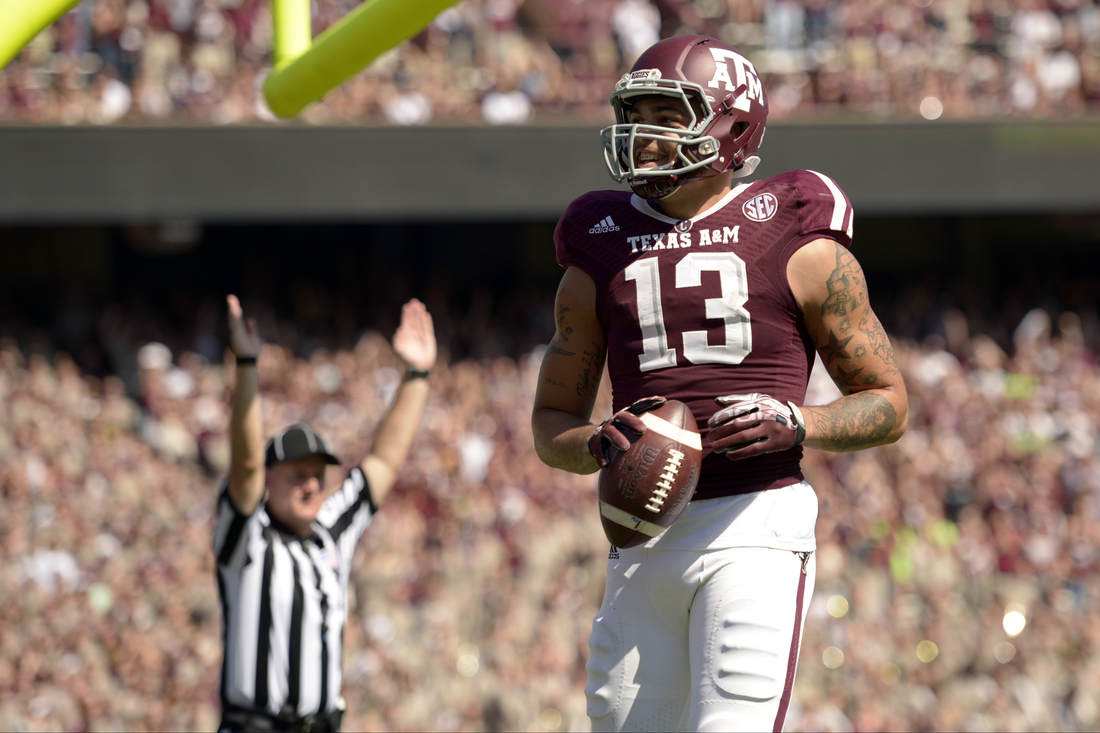 Chicago is likely losing Henry Melton to free agency and perhaps cutting veteran Julius Peppers, who is clearly on the downside of his career. Donald is a fast-rising prospect who looks the part of a future Pro Bowler.

Troy Polamalu is a first-ballot Hall of Famer, but the man known for his hair is getting close to retirement. Pryor can step in and play free safety for the first few years of his career, before sliding over to take Polamalu's spot when he hangs up the cleats.

The Cowboys are roughly $145 million over the salary cap and are probably going to part ways with DeMarcus Ware. If he leaves town, Dallas needs a pass-rusher and finds that with Barr. Then again, we are talking about Jerry Jones, he might draft a receiver.

Lewan helps to stabilize this shaky offensive line. Left tackle Eugene Monroe has said he will not be giving a hometown discount and might be headed elsewhere. Lewan is a beast who will start immediately on either side of the line.

Lee is the best receiver available, making him the obvious pick for Gang Green. As much as Rex Ryan loves his defense, he has no choice but to take a playmaker here for Geno Smith.

Does this pick need an explanation? Jonathan Martin is out, Ryan Tannehill spends most of his days looking at the sky, and the Dolphins can't block a high school team.

Arizona took Jonathan Cooper last year only to lose him in the preseason. With the addition of Su'a-Filo, the Cardinals have the makings of a tremendous interior up front to help Andre Ellington run the rock.

Nix would be replacing B.J. Raji as the 3-4 nose tackle. The big man from Notre Dame would be a perfect scheme fit for Dom Capers and help to shore up the middle of Green Bay's defense, which needs the help.

Philadelphia needs to add some secondary help, especially on the outside. The Eagles could go with a safety here, but the value of Gilbert is too good to pass up.

If you didn't scroll straight to this pick, you probably thought I was going with Clinton-Dix here. Nope. I believe John Dorsey will grab a safety in free agency, but let Tyson Jackson walk. Tuitt needs to lose some weight and could be a bust, but also has excellent potential. I believe the Chiefs will take the gamble and aim high. 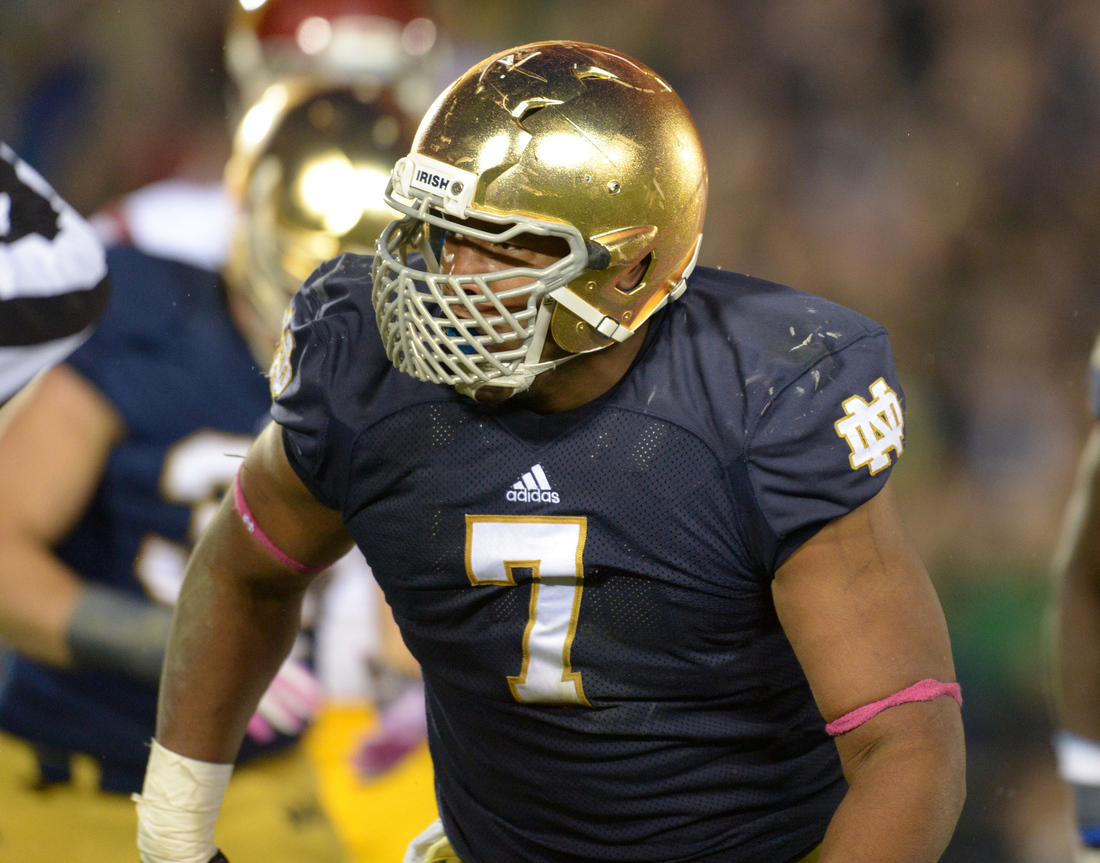 The Bengals have aging corners and a playmaker coming off ACL surgery in Leon Hall. Taking another corner to fortify the secondary is a smart move for Cincinnati, making Roby a nice selection.

San Diego's general manager Tom Telesco can go plenty of routes here, but Verrett provides a nice blend of best available and need. The Chargers current corners are awful, making Verrett an instant starter provided he doesn't shatter both legs in training camp. Even then, he might start.

With Bortles in tow and Josh Gordon and Jordan Cameron on the roster, Beckham Jr. makes for a great move. The speedster would provide another vertical threat to pair with Gordon, taking the tops off of defenses for the skilled Cameron.

Ford made noise shooting his mouth off about Clowney, but failed to show up due to medical reasons in the combine workouts. No matter, Ford is a talented end who can disrupt and create havoc in the backfield. He will replace Will Smith nicely.

This is where the slide on Ebron goes. Many have him being picked in the first dozen picks, but with the talent at wide receiver and on defense being so deep, I think he's a casualty of depth. Ebron is a good-looking player who will give Cam Newton another solid target.

Bill Belichick will probably trade down 34 times before actually making a selection, but if he stays here I like Benjamin going to New England. Benjamin has a similar build to Randy Moss, something Tom Brady can use once again. The current receivers Brady is dealing with are sad.

The 49ers are thought of as a great defensive team and for good reason. However, they lack a good nose tackle which hurt them at times last season. San Francisco can do itself a favor and take Jernigan, who while raw has obvious upside.

This scenario might enrage many Chiefs fans, but that is the way it goes. Clinton-Dix could fall if a run on defensive linemen begins, giving him a home in Denver. The Broncos have holes on defense, and can plug a significant one if they get lucky and Clinton-Dix finds his way to them.

Cooks is an intriguing prospect with speed. He can help fill the void left by the departure of Sidney Rice and the likely departure of Golden Tate. Considering Percy Harvin also gets hurt about once an hour, Cooks could really be a valuable weapon immediately.