In the first post of a long series, we'll breakdown how the Chiefs strengths and weaknesses will translate into either their ability or inability to beat each team on their 2014 schedule. Up today, the Arizona Cardinals.

The purpose of this article -- and the rest of the articles that will follow in this series -- is to gauge where the Kansas City Chiefs currently stand in terms of their ability to beat their opponents next year. Each article will look at each team's record last year, as well as their biggest offseason priorities and the result of the last game they played against the Chiefs. After that, we'll look at which team has the advantage in a number of key areas -- both on paper, and on film -- and discuss the implications of those areas of strength and weakness towards the Chiefs chances of winning the game in question.

As a refresher, here are the Chiefs 2014 opponents.

We start with the Arizona Cardinals. Let's get started.

One might assume, at least on paper, Carson Palmer is a better QB than Alex Smith ... but one would be mistaken. Smith and Palmer trade punches when comparing passer rating (Smith won 89.1 - 83.9 last year) and QBR (Palmer won 51.9 - 49.4 last year) but that doesn't even tell the whole story.

Football is still a game in which the team with the most points wins the game, and because of that fact, scoring is better than not scoring and teams are more likely to score if they keep the ball than if they give it away. Any arguments on those points? Good.

Carson Palmer accounted for a respectable total of 24 TDs last year, all which came through the air, and he turned the ball over a total of 25 times (22 INT and three lost fumbles), giving him more turnovers than TDs last year. For the sake of this argument though, let's call his TD to turnover ratio 1:1.

Alex Smith accounted for a total of 24 TD last year, as well, one of which was a rushing TD, and he turned the ball over a total of 10 times (seven INT and three lost fumbles), giving him a TD to turnover ratio of better than 2:1, which I'll refer to as 2:1 just to make it a little easier on poor Carson Palmer.

On paper, we see that Smith scores just as many points as Palmer, and he turns the ball less than half as often. Basically, when it comes scoring, the two are dead even -- and when it comes to maintaining opportunities to score, Smith is twice as good as Palmer.

Let's break this down a little more.

Who has the advantage when the Cardinals pass the ball? 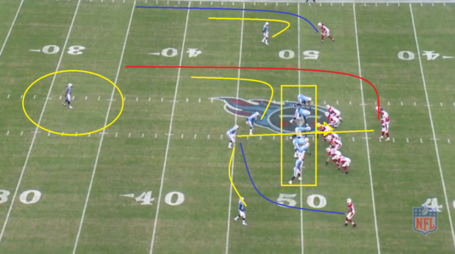 Bruce Arians is smart, and that understatement is never more obvious than when he designs plays like this one. He knows that the Titans -- like the Chiefs -- would love nothing more than to press the receivers from a cover 1 defensive set and try use that combined with a blitz to to put pressure on the QB. Because he knows this, he sends Andre Ellington (one of the most talented receiving backs in the league) on a wheel route to a part of the field that would be vacated by the previously described defensive set. The result is an exceptionally easy 31 yard gain that could have gone for even more. 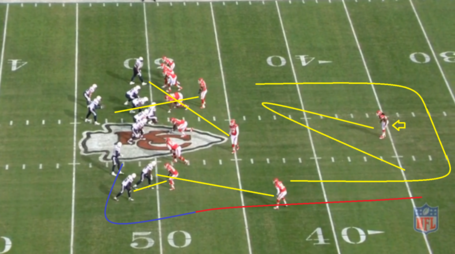 Here's an example of the Chargers attempting a similar play (a quick pass against a cover 1 from an abnormally tight offensive set), and the result is pretty much the same. The space created by the offensive stack on the right side (and aided by the lack of another deep safety in cover 1) results in a 29 yard gain with relative ease.

As things stand right now, there's no reason we should think the Cardinals will have much trouble passing the football against the Chiefs.

Who has the advantage when the Chiefs pass the ball? 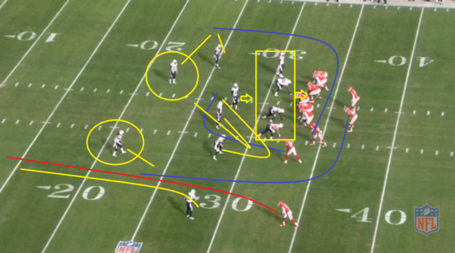 The Chiefs passing attack isn't terribly complicated, and yet it works well. They like to use Jamaal Charles when at all possible, but even when they can't use him directly, he makes for a great distraction regardless of the opponent's defensive set.

On this play, the Chargers are in cover 2, and both Charles and Dexter McCluster are simply decoys to draw all but one defender away from the speedy Donnie Avery. The play works flawlessly -- as the defense scrambles to blanket Charles and McCluster, they put themselves in a bad position with a quick receiver going one-on-one with a CB and no deep help if the corner gets burned. The alternative was to let either Charles or McCluster have a similar matchup, and that probably wouldn't have ended any better. The play resulted in a 32 yard TD for the Chiefs. 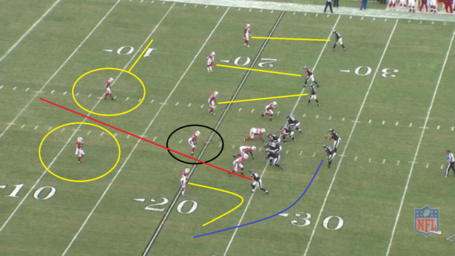 Against the Cardinals, the Eagles run almost exactly the same play we just saw the Chiefs run, and the result is almost exactly the same as well-- a 24 yard TD. The Cardinals bite when the Eagles send LeSean McCoy to run a swing route, and Nick Foles easily finds a mismatch against a lone safety for a TD. There really isn't much to say here -- the Cardinals have shown a propensity to struggle against a type of play that the Chiefs excel at running.

The Cardinals defense is good overall, but below average at defending the pass -- they were 14th in passing yards allowed, but only six teams gave up more TDs through the air. The running game is much closer, but honestly, this matchup isn't that close.

Only 10 teams failed to average at least 100 yards per game on the ground this year and the Cardinals were one of those teams. The Chiefs, meanwhile, were one of only five teams to run for at least 2,000 yards, 15 TDs, and a 4.5 yard per carry average. On the offensive side of things, the Chiefs are in a different league than the Cardinals when it comes to the running game.

On defense, the story couldn't be more different. The Cardinals rank first and second in running yards and running TDs allowed, respectively. The Chiefs ranked 22nd and sixth in the same categories, but got progressively worse as the season went on. On the defensive side of things in the running game, the Chiefs don't belong in the same discussion as the Cardinals. But games aren't played on paper -- what does the film say?

Who has the advantage when the Cardinals run the ball? 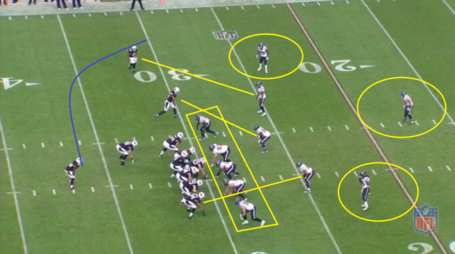 There's really not a nice way to say this, so I'll just go ahead and say it: the Cardinals are really bad at running the football. The player who accounted for over half of the team's carries this year (Rashard Mendenhall) averaged only 3.2 yards per carry, and had only one carry of 20 yards or more over the length of the entire season.

Plays like this one show us exactly why that's the case. With the Texans in cover 3, and what should have been more than enough Arizona blockers to gain at least 4 or 5 yards with the Houston safeties sitting deep, the Cardinals barely make it back to line of scrimmage. The blockers do a mostly poor job of helping out their HB, who in turn does an equally poor job of being decisive on the play. 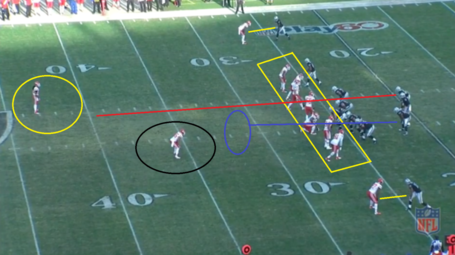 There is absolutely no reason that the Chiefs should have given up 21 yards on this play. With 7 defenders in the box on the line, and another a little deeper spying on the QB, the Chiefs had 8 payers who should have been readily available and able to defend the run up the middle. On top of all that, Kendrick Lewis is guarding the middle of the field, providing reason number 9 that this play shouldn't have worked -- but it did.

Long story less long -- the Chiefs are just as bad at defending the run as the Cardinals are at executing it.

Who has the advantage when the Chiefs run the ball? 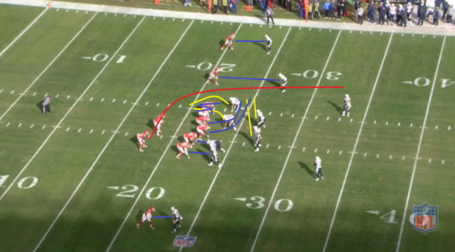 The Chiefs block well and Jamaal Charles is a deadly combination of fast, smart, and decisive as a runner -- the result of all of those things on this play is a 12 yard gain against a defensive set that should have been pretty decent at stopping the outside run. The bottom line here is that the Chiefs can run the ball whenever and wherever they want to, and an improved season from Eric Fisher next year could make that even more obvious to everyone watching. 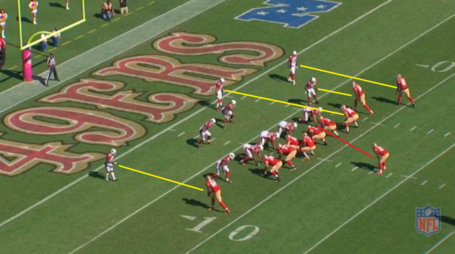 Breaking down the Cardinals running defense is difficult simply because it's so simple. Even though they struggle against the pass, the players they have in the secondary are all freakishly gifted athletically, and because of that, they can feel comfortable without providing those players any help in situations like this one. The result is 2 more defenders committed to stopping the run than they 49ers have blockers to help the run, and a 1 yard loss on the play.

Overall, the running offense and defense of the Chiefs and Cardinals respectively is an interesting one, to say the least. I say it's too close to call, at least until both teams have a full offseason to change anything.

Who has the advantage on special teams?

I tried to breakdown the ST film the same way I did for the passing and running and it looked like a Crayola factory exploded on my screen. That said, I'll keep this portion simple.

Watching the film leaves little doubt that not only is Dave Toub a freaking genius, but also that the Chiefs have an undisputed edge against pretty much every other team in the league when it comes to overall Special Teams play. Between the return game and Dustin Colquitt, the Chiefs have two game changers on special teams that can make up for some otherwise often inconsistent play from their other units.

Who has the advantage in coaching?

No offense to Bruce Arians -- who is a great coach -- but he has a lot yet to accomplish if he wants to be considered in the same class as Andy Reid.

Who has the overall edge in this matchup?

This one is tricky. The Chiefs seem to have more advantages, at least as things stand right now. The Cardinals will play this game at home, and the only such games they lost last year were to the two teams that played in the NFC Championship game.

I'd say it's pretty even, and without seeing what the two teams will do with the rest of their respective offseasons, and knowing that Patrick Peterson and Tyrann Mathieu are likely to improve dramatically to help shore up the Arizona secondary, I feel like they'd have the edge at home. But the Chiefs will likely improve quite a bit, as well, especially if Travis Kelce can help the offense in the way that many people think he can.

I think the Chiefs will lose more games next year than they did this past year -- but I don't think that this is one of those games.