From the NFL Combine in Indianapolis, Chiefs coach Andy Reid touched on his impressions of the 2014 NFL Draft class and his own players coming back for the 2014 season.

Share All sharing options for: Chiefs' Andy Reid looks forward to a "good group of guys" in 2014 NFL Draft class

Kansas City Chiefs head coach Andy Reid took the podium on Thursday for his 2014 NFL Combine media session. If you expected Big Red to keep things close to the vest ... you were correct. Reid didn't drop any breaking news on us but he did touch briefly on the 2014 NFL Draft class and his own players heading into the 2014 season.

Reid also said he's a big believer in building your team through the draft and that the Chiefs should select the best player available. Which, you know, everyone says. As he did last year, Reid also made said that it was GM John Dorsey who was handling the personnel side.

As for his own players, Reid said that the growth Eric Fisher had last year was "phenomenal", and that he hopes and expects for similar growth from everyone in the organization, including the players and coaches.

"We have some guys I'm looking forward to seeing," Reid said when he was asked about in-house players entering next season. "It's different from playing the scout team during the year and going out there and competing for a spot. I'm looking forward to training camp to see what the guys do. I think we have a good group of young players that form a nice nucleus.

"I look forward to adding guys, too. I'm a big believer that you build your team through the draft. Free agency can be a bit of a tease at times and you have to be careful of that."

More stories from Andy Reid's podium appearance are coming. In the meantime, a few more quotes below...

On developing: "The growth Eric Fisher made throughout the year was phenomenal and he was the No. 1 pick. I expect that from our guys and I expect our coaches to be able to relate to our guys and coach them and teach them to be better than what they were coming out. "

On the Super Bowl: "I thought Seattle did a great job. They had a heck of a year offensively and defensively. Well deserving to be Super Bowl champs. I thought Denver deserved to be there, too. Things didn't work out for them in that game but they were a good football team."

On the 3-4 defense: "I like the 3-4, some of the things it gives you. In particular, once you drop the nose and find yourself into a nickel situation, you can use those guys as rush and drop guys. Plus you can be a little more creative with some of your blitz packages."

Reid says Dressler and McKnight are quick guys who both bring return ability. But wants to see what they can do in OTAs.

Chiefs coach Andy Reid told us in the hallway after stepping down from podium, "I’m not a big free agency guy."

One more thing ... The picture at the top of this post is from last year's Combine. The picture below is from today's media appearance. 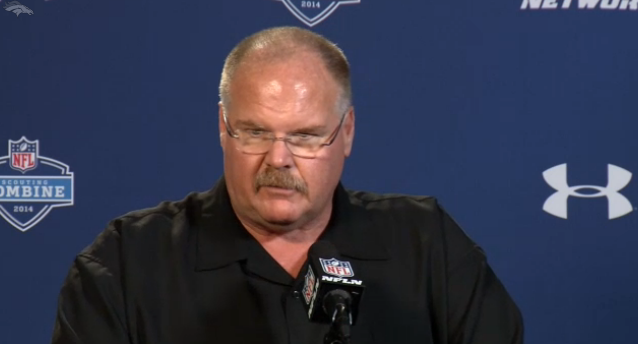