Fun fact: The Kansas City Chiefs have a top 5 fan base

According to data from Nielsen, the Chiefs have one of the top five local fan bases in the NFL.

Share All sharing options for: Fun fact: The Kansas City Chiefs have a top 5 fan base

The Nielsen 2013 sports year in review has been released and, while there's plenty of interesting facts in their report, here's the FACT I like the most: 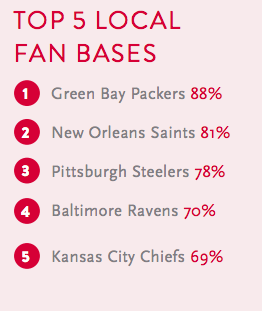 Percentage of the population that has watched, attended or listened to the team in the past 12 months

The Chiefs local TV ratings were up 41 percent from 2012, which was the highest year over year growth in the league. Overall, the Chiefs were tied with the Green Bay Packers third place in local TV ratings, behind New Orleans Saints and Denver Broncos.

Also, who are these 31 percent of the people in Kansas City who have not watched, attended or listened to a Chiefs game in the last 12 months? Where are you people hiding on Sundays?

The Nielsen 2013 sports year in review can be found here. It covers every major sport.

Here are a few more fun facts from the report: