Share All sharing options for: The Chiefs defense and 25+ yard plays: Part 1

The Chiefs looked lost on defense over the last half of their 2013 season. If you weren't already aware of that fact, I'm going to assume that you don't have a TV, or a radio, or Internet access. There are a number of people who don't even know the difference between a linebacker and a safety who are well aware of the fact that the Chiefs defense couldn't stop a nosebleed late in the season.

The problems were numerous before that point, however, and the writing was on the wall for this epic collapse as early as the second game of the season.

Scheming Sutton: A primer on the Chiefs secondary

To illustrate this point a little better, I  looked at all of the plays of 25 yards or more that the Chiefs defense surrendered through the first nine games. Here's what I found: 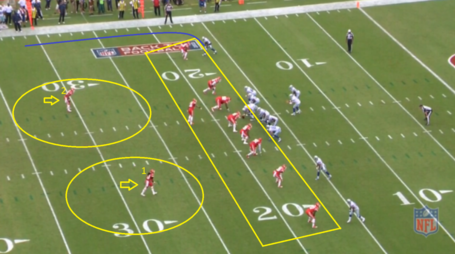 This is pretty close to the scheme the Chiefs probably should have employed for the majority of the season, but we'll get to that a little later (or read this from Craig Stout). This a Cover 2 (double-high safety) man-to-man coverage (man-under, meaning the defenders "under" -- in "underneath" coverage -- the safeties are playing man-to-man). The safeties are indicated by arrows, and the circles around them indicate the zone they are responsible for. In addition, the safeties in all schemes are instructed above all else to not let anything get behind them.

The box indicates the issue that the Chiefs ran into on this play. They put 8 players on the line of scrimmage, and 9 in the box within 5 yards of the line of scrimmage. This means that if any of the corners get beat (Brandon Flowers does, and badly) at the snap, there is now a window of nearly 15 yards between the the corner that gets beat and the safety on his side.

On this play, Tony Romo was able to hit Dez Bryant in that window (his route is indicated in blue), and he did so with enough time to spare that Eric Berry had very little chance of reacting in time to be in a good position to bring down Bryant in the open field. The play gained 53 yards for the Cowboys. 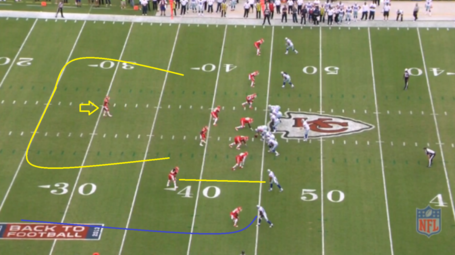 This is the defensive scheme you'll see more often throughout this article. It's Cover 1 (single-high safety) man-to-man coverage, with the safety and his zone of responsibility indicated by the arrow and the yellow lines around him. Again, his primary task is to make sure that nobody gets past him. Also of interest in this play is that a typical Cover 1 would have the FS (Kendrick Lewis) deep and the SS (Eric Berry) on a receiver. In this case, Berry is the deep man and Lewis' assignment is indicated by the yellow line.

This play was simply a case of a corner getting beat too quickly again, and the inability of the single deep safety to reach the play in time to keep it from becoming a big gain for the offense. The play resulted in a 38 yard gain for the Cowboys. 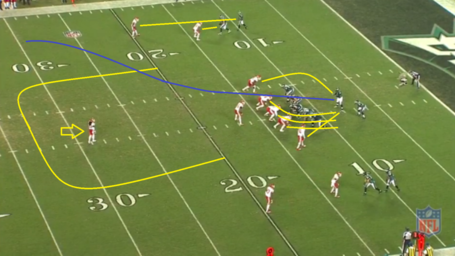 This is another case of Cover 1 defense (that looks like Cover 3 until the other semi-deep players move up in man coverage), but the specifics of this play are what doom the Chiefs for failure. Of the 5 players on the line for the defense, 4 of them try to overload the left side of the offense, while the other player tries to swim around the side of the RT. There is a LB spying Michael Vick, but the gap created by the defensive line results in a window that Vick can exploit for at least a fist down with ease.

The problem is magnified when the open space in front of Vick (who has consistently clocked at better than 4.4 in the 40 yard dash) is occupied by Kendrick Lewis (who ran a 4.77 at the combine). Yeah, big surprise here -- Vick gains 61 yards on the play. 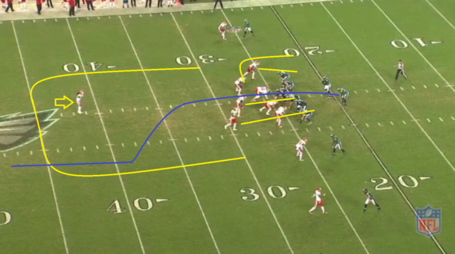 This is Cover 1, again. The defensive line's attack leaves a huge gap, again. And the Eagles are able to turn it into an even bigger play by getting a speed mismatch on Kendrick Lewis, again. LeSean McCoy gains 30 yards on this play. 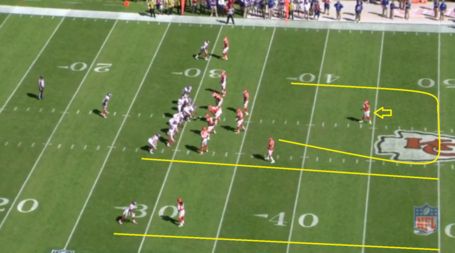 I don't know about you, but I'm starting to see a pattern developing. It's Cover 1 again, and Kendrick Lewis is the deep man. Victor Cruz gets one-on-one with the recently released Dunta Robinson and a lot of space (indicated by the yellow lane), and he beats him badly. Kendrick Lewis has too much ground to cover as he makes his way over from his zone, and the result is an easy 69 yard TD for the Giants. 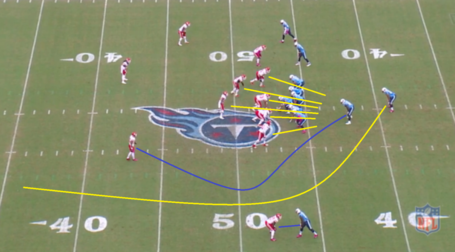 This is a rare Cover 2 man-under look from the defense, but the Chiefs ruin its potential. They attempt to overload the right side of the offense, and Jackie Battle runs the other way. Once the FB picks up a block on the safety, Battle has a clear lane to run 37 yards for the first down. 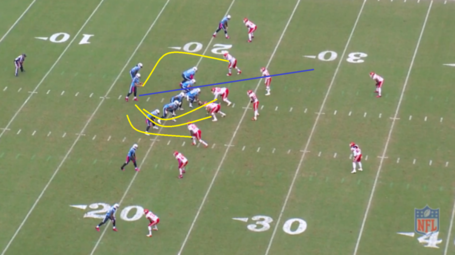 The Chiefs actually defended the pass very well on this play, and the defensive line got into the backfield quickly. The problem is that for some reason the LB spying the QB sits in the middle of the field as Ryan Fitzpatrick scrambles around and out of the pocket, and by the time the secondary reacts to the QB running, he has enough of a head start to gain 26 yards and a first down. 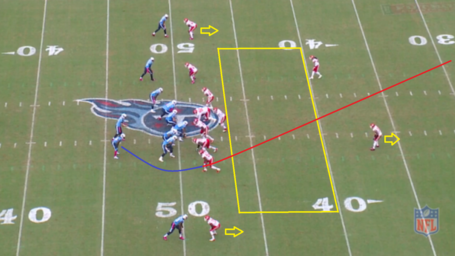 This is one of the last Cover 2 man-under looks we'll see for a while, and it is beaten easily. The problem is that as the play develops, there isn't a single defensive player who covers the area within the box. This results in big problem when Chris Johnson breaks off of Derrick Johnson's coverage and Fitzpatrick hits him with a makeshift screen pass right as he enters the Bermuda Rectangle of Chiefs defenders. The speedy Johnson has one man to beat and yep, you guessed it -- it's Kendrick Lewis. 49 yards later, the Titans have 6 points on the board. 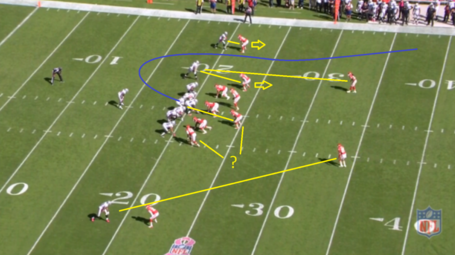 This looks like a Cover 2 man-under for a while, but right before the ball is snapped, Kendrick Lewis runs up to the line and begins his coverage of one of the receivers (who was already covered). So it's a Cover 1, right? Actually, Eric Berry almost immediately runs over to defend a receiver on the other side of he field. Confused yet? Because we're just getting started.

One of the apparent pass rushers and an apparent QB spy converge on a spot together that isn't within 10 yards of any of the action -- and then they both sit there. Terrelle Pryor scrambles for 27 yards rather easily into wide open space. 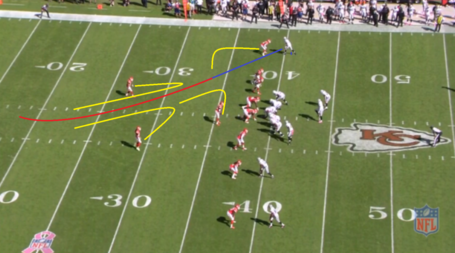 Again, this initially looks like Cover 2 man-under, but right before the snap, one of the safeties moves up -- it's a Cover 1. The story of the play as it develops is a simple one -- everyone who tries to tackle the receiver after he catches ball takes about as bad of an angle as they possibly could, and he easily runs 39 yards for the TD. 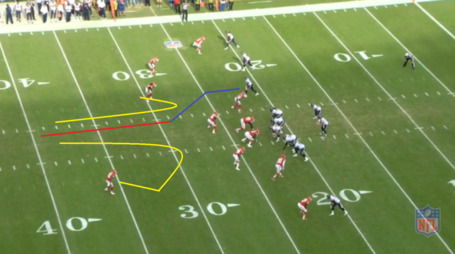 This is Cover 1 again, and Kendrick Lewis is the defender that is beaten badly as the receiver runs straight past him after catching a pass that could have been a simple slant pattern for a minimal gain. Eric Berry, who was originally running the other way (to help cover Andre Johnson) can't recover nearly in time, and the result is a 42 yard gain. 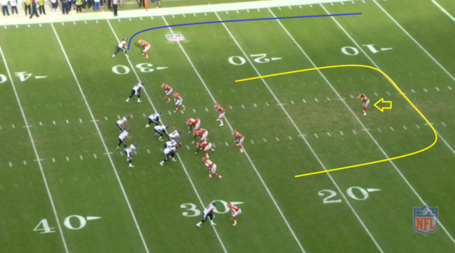 This is Cover 1, and the corner never stood a chance against the double move by Andre Johnson. It was an easy 29 yard TD, as Kendrick Lewis never even got close to the ball. 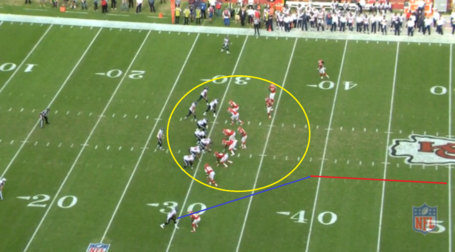 The mysteries of this play abound, and chief among them is why in the world every single member of the Chiefs defense ends up within 5 yards of the line of scrimmage, and 9 of them are inside a rather small circle in the middle of the field. In fact, aside from the QB, only 4 players (2 each from the offense and defense) are outside of that circle.

The other big mystery is why this play didn't result in a TD, and rather just 26 yards and first down as Andre Johnson catches the slant pass just outside of the circle and turns it up field. 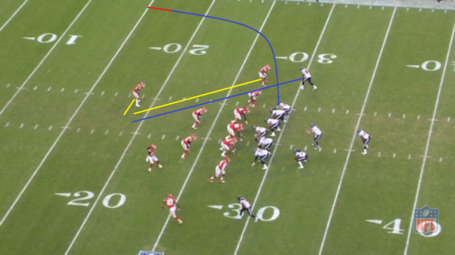 Again, this is Cover 1, and the play is very simple. The corner in coverage and the deep safety both follow Andre Johnson across the middle of the field, and the TE runs a delayed route to the vacated spot  along the sideline for a 27 yard gain. 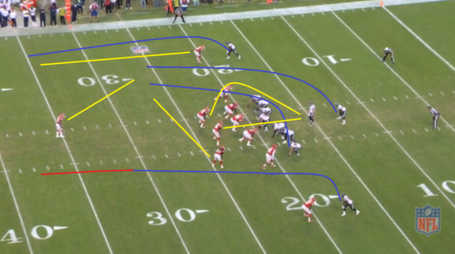 At this point, it's starting to get ridiculous -- even though they keep getting beat when they do it, the Chiefs are in Cover 1 again. All of the linebackers either blitz or defend to the offensive right side, as does the deep safety. This means that when the receiver runs his route to the inside of the covering CB, Case Keenum has a very easy throwing lane to a quick receiver. The play results in 42 yards and first down. 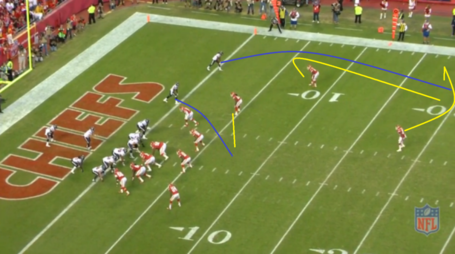 The safety in this Cover 1 look is Eric Berry, and he runs straight past the receiver in an attempt to break up the pass. The result is enough open room for a 35 yard gain and a first down. 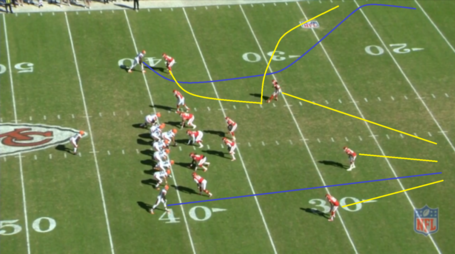 This is a Cover 3 man-under defense, and for some reason, every single one of the 3 deep defenders converges to the same spot on the deep offensive right side. This means that when Josh Gordon gets outside his covering CB, he has nobody in his way as he runs 39 yards into the end zone. 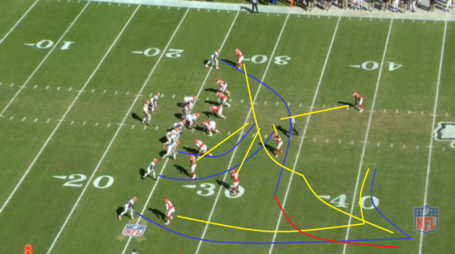 This is a Cover 1 defense again, and the play looks more complicated than it is. By the time Josh Gordon catches the pass on the crossing route, everyone except for his covering CB is behind him or too far down field to stop him. The result is a 47 yard play, and first down. 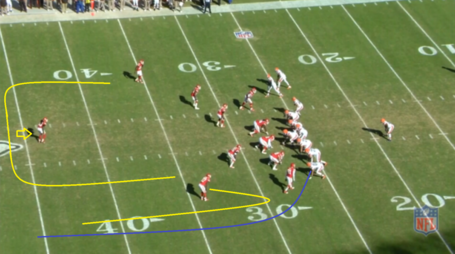 In this Cover 3 look, the Chiefs were simply unprepared to cover Jordan Cameron adequately. The mismatch results in an easy 37 yard pass before Kendrick Lewis can provide help to end the play. 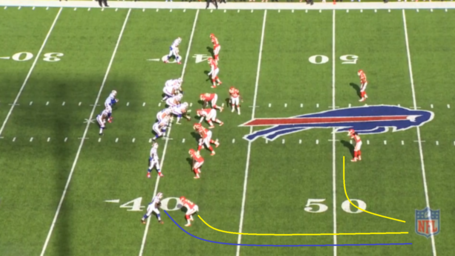 Here, we finally see Cover 2 man-under again, but it doesn't matter too much. Both the covering CB and Kendrick Lewis run like the have weights on their ankles, and the play goes 59 yards for a TD. 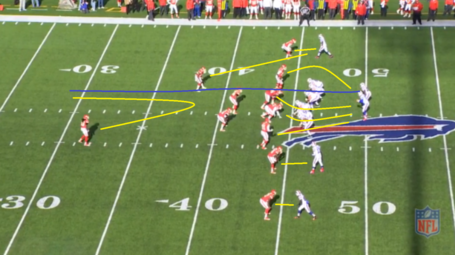 This is Cover 1, and Kendrick Lewis -- in a way that is becoming nauseatingly like Déjà vu -- is too slow to keep the play in front of him. Once C.J. Spiller finds a running lane, he's off to the races for a 29 yard gain and a first down. 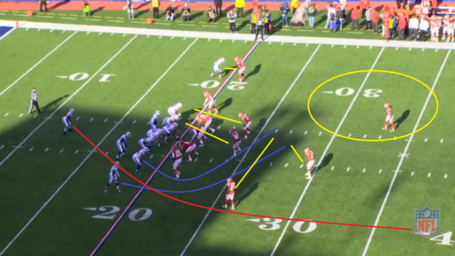 What looks like Cover 2 initially is an offset Cover 1, and all of the man-under defenders are led over to the offset zone side of the field when they attempt to cover their receivers. C.J. Spiller saw nothing but green when he stepped up and to his right with the ball, and he gained 61 yards on the play. 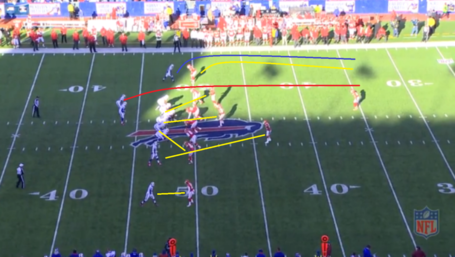 The defense is exactly the same as the last play, and Spiller this time takes a screen pass into the area underneath the deep zone, and then runs past Lewis for 27 yards and the first down.

Looking at all of the precursors to the defensive collapse that was to come, I can't help but notice two trends that define the vast majority of the plays:

1) Kendrick Lewis is simply too slow to play FS in the NFL.

2) Cover 1 combined with press coverage man-to-man is not something this defense consistently does well.

Part 2 of this feature will explore both of those points and many others after the entire season has been looked at.

What do you think was the biggest problem for the first nine games?