With the wounds still fresh from the Chiefs early playoff exit, Craig reviews the schemes the Chiefs secondary and DC Bob Sutton employed, and discusses the most important move of the offseason.

It's been a month since the Indianapolis Colts dropped a historic comeback on the Chiefs. It still stings like it was yesterday.  442 yards passing by Andrew Luck.  224 yards receiving by T.Y. Hilton.  What happened to this once vaunted defense, and how did it happen so quickly?

Going into the season, the word was that new defensive coordinator Bob Sutton was going to play a press man coverage scheme.  It was likely going to give up the occasional big play, but on the whole it would be improved over the soft zone coverage and the "bend-but-don't-break" defenses of the previous years.

What we got instead was a team that beat up on teams with talent, but got beat up by good game planning.  In truth, what Sutton found was that he didn't quite have the personnel he needed to field the secondary that he wanted.

One of my earliest posts (from five years ago, yikes!) was about the 3-4 defense and how important the nose tackle position is to making the front seven work.  What Sutton discovered this year was that he was missing the most important position in his preferred secondary scheme: the free safety.  I'm not breaking any big news with that statement, and I'd struggle to find someone who didn't think an upgrade at safety was necessary.  Let me try to explain to you why it is paramount that the Chiefs make this player the most important part of this offseason.

Before we start, a little overview may be in order.  Most are familiar with the various coverage shells, but for those who aren't, let's review some of the schemes and terminology used in the Kansas City secondary. 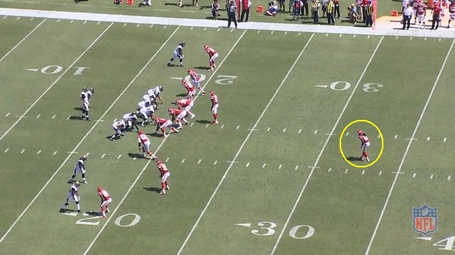 In an ideal world, this is the scheme Bob Sutton would love to run as his primary coverage scheme.  There is one deep safety, and every other player is playing man-on-man defense.  This is also described as "man-free" coverage.

In Sutton's press man scheme, he wants his cornerbacks to jam the receivers off the snap to throw off timing routes, then run with the receivers after that.  Ideally, the timing routes aren't there, and the coverage is sufficient enough on underneath routes that the pass rush can effect the quarterback's ability to throw the ball accurately.  The deep safety is responsible for anything over the top, and must play sideline to sideline.  The advantage of this coverage is its aggressiveness.

In the picture above, the Chiefs are rushing the passer with six players, while still covering every receiver.  It allows flexibility while rushing the passer, and keeps an extra player in the box if the play is a run.  The disadvantages of this scheme involve deep passes.  If two receivers run deep routes on opposite sides of the field, the deep safety can only help with one.  Also, there tends to be more space for yards after the catch in this scheme. 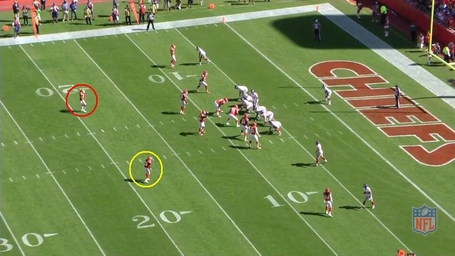 In this scheme, there are two deep safeties, each responsible for half of the field.  Sutton played mostly man coverage with his cornerbacks, but the coverage out of the linebackers was mixed.  Press man coverage is just as successful as in a Cover 1 scheme, and it doesn't require a sideline to sideline deep safety, as each safety splits the field in half.

The advantages of this scheme all pertain to its versatility.  In theory, this coverage scheme should be strong against every level of pass, due to the deep safety help.  The disadvantages come from only having seven men in the box, which typically makes it weaker against the run.  Also, as the safeties split to cover their half of the field, the center of the field can become exposed to a slot receiver or tight end.

The Cover 2 requires its underneath personnel to be superior in pass coverage as well.  In a Cover 1, the safety can easily match up man-to-man with a tight end.  In a Cover 2, that responsibility is usually left up to a linebacker.  Finally, the Cover 2 requires a more "honest" pass rush than a Cover 1.  If a blitz is called that brings an extra linebacker, safety, or cornerback, a hole in the coverage appears. 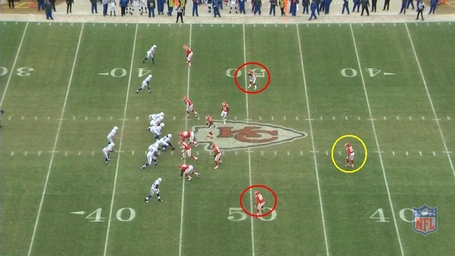 As you can probably assume from the prior two schemes, this one splits the deep coverage into thirds.  The deep safety takes the center third of the field, and two of the cornerbacks play off the receivers to cover the outside thirds of the field.

The advantage of this scheme is that it brings a safety back into the box and still doesn't force the deep safety to have to cover sideline to sideline.  This should help with run defense as well as preventing the deep passes, as the cornerbacks have a cushion to run with the receivers.

However, the disadvantages are obvious.  Short, quick passes are nearly indefensible in this scheme, requiring the linebackers to step into passing lanes to try to shut down slants, and a quick out pattern requires great awareness by the cornerbacks to stop.  The Cover 3 is also pretty easy to identify coverage zones, as there aren't a whole lot of wrinkles that can be thrown in to keep the offense on their toes. 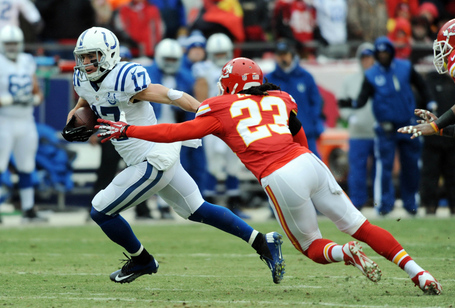 This brings us back to personnel.  Against the pass, the front seven consists of a good coverage linebacker in Derrick Johnson, two good pass rushing options on the outside edges, a nose tackle that got double teamed most of the season resulting in not a lot of pass rush, and liabilities at the other 2-3 positions.  That means that on a given passing play, the secondary needs to keep the receivers covered long enough for the outside linebackers (and hopefully defensive linemen) to disrupt the quarterback.  That would indicate a need for a coverage scheme that didn't allow quick strikes, making the Cover 3 less suitable due to its propensity for successful quick passing, leaving the Cover 1 or 2 as best suited for the front seven personnel.

Unfortunately, when we got to last year's secondary, things get hairy:

Sean Smith is a bigger corner who is best when jamming at the line and tying up receivers, not when trying to cover a deep zone.  He can play in any of the above schemes, as long as he's in man coverage (see the "Cover 3" picture -- he's up on the line).

Brandon Flowers can't line up and jam big receivers like Dez Bryant or Demaryius Thomas well enough to make it a viable strategy, so against those types of teams, he's better off in a Cover 3 or a zone Cover 2, or as a slot corner to match up against smaller wideouts.

Eric Berry is definitely a jack of all trades, and seems to fit better in the box, covering tight ends, stopping the run, and blitzing.  One could argue that this year was his best year yet as a professional, and that's due to his ability to play a hybrid safety / linebacker role in subset packages.  Sutton used another safety (Demps or Abdullah) deep in Cover 2 looks with Berry, but with a Cover 1 look, the team was stronger against the run and rushed the passer better with him.

Finally, Kendrick Lewis became the focal point.  The Chiefs used all of these looks (and the Cover 4 or "prevent" defense) regularly throughout the year, but as the year went on, the Cover 1 seemed to fade more and more for the Cover 2 and 3 coverage schemes.

Bob Sutton realized 1/3 of the way through the season that he didn't have the deep safety to run the Cover 1.

Bob Sutton realized 1/3 of the way through the season that he didn't have the deep safety to run the Cover 1. It slowly faded out until it became a surprise to see a single deep safety on the field, and games against the Broncos, Colts, and Chargers featured almost as much Cover 3 as it did Cover 2.

As noted above, the Cover 3 is usually going to be the one that does not play to the front seven's strengths.  Yet, he was forced to play the coverage because his safety crop was so poor that they were getting beat deep, even in a Cover 2 shell.  The aggressive nature of Sutton's defense was gone, and there was little he could put on the field to help without sacrificing other positions.

In short, it's the biggest thing this organization can do to help make the defense better.  It makes the cornerbacks better, which allows the front seven more time to get to the passer.  It gives the defense the aggressive nature it started the season with, allowing blitz versatility and adding confusion.  It is, for me, the most important piece of this defensive puzzle.

So don't be surprised if you, as a Chiefs fan, find yourself feeling a bit of deja vu.  For the second time in five years, this Kansas City  defense has changed their scheme, only to find that they didn't have the crucial part that makes the scheme change work.  Last time it took three years of stopgaps and poor play to fill the nose tackle position.  Here's hoping this organization can make the right move quickly.