Good teams do the little things right. You hear it all the time, and it’s true. The talent level on each team in the NFL is more or less equal, unless you’re the Raiders. That’s how teams like the Rams can beat teams like the Broncos. The Broncos aren’t that much better than the Rams, but when viewed through the spectrum of the extremely consolidated NFL, the Broncos tend to look like world-beating gods, and the Rams look like Austin Davis and Shaun Hill. Teams that do the little things right get ahead.

The Chiefs look like a good team right now because they’ve been doing the little things. That makes sense, because under Andy Reid and his staff, the Chiefs have been one of the best coached teams in the league. This coaching staff got the NFL’s Hustle Play Of The Year out of Ron Parker last week. You expect the Chiefs to do the little things right.

I don’t have the fancy All-22 videos to make my points, but I do have access to highlight packages and can take screenshots on my computer. Here are three plays that stuck out to me as prime examples of how doing the little things can produce huge dividends:

Special Teams: The Chiefs pin the Seahawks deep late in the game

First of all, Dustin Colquitt is amazing. This play never happens if Colquitt isn’t such a fantastic punter, but he is, and we take that for granted far too much. How he hasn’t made the Pro Bowl every year of his career baffles me.

Let’s start with Junior Hemingway’s great play to keep the ball out of the end zone. You see players make this play fairly regularly, but rarely is the result as successful as this. Look where the ball lands after Hemingway's flip: 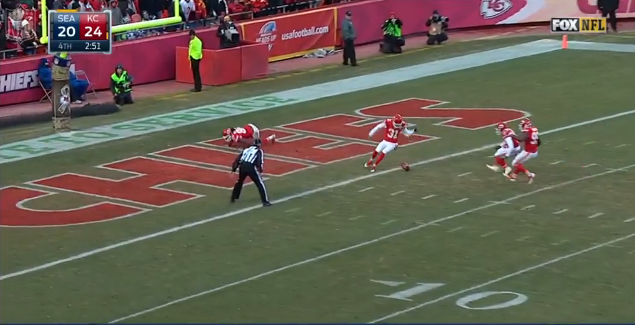 That ball is right in front of the goal line. It’s actually a little too close to the goal line, because Albert Wilson still had to come in and bat it off the line. But placing the ball right in front of the line with that sort of precision takes practice. I’m sure Dave Toub has the special teams unit out running these sorts of drills frequently- and it paid off here.

Also note that there are four guys in red already in the picture who are all capable of downing the ball. The punt took place 55 yards down the field and only had a hangtime of 4.6 seconds. That’s what speed do. 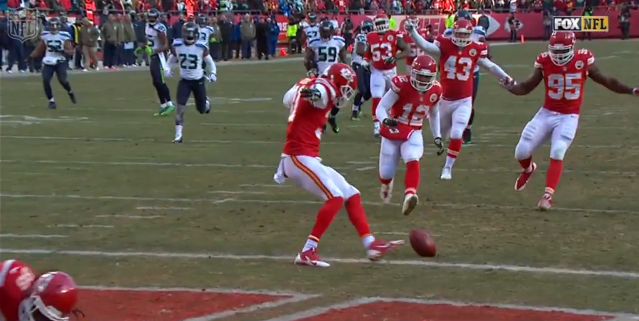 Now here’s a key part of this play- one of the little things that adds up to so much in the end. Marcus Cooper is in great position to down the ball or bat it off the line. He’s closer to the ball than Wilson. The problem? He’s in the end zone. If he touches the ball at all, it’s a touchback. In this picture, you can see Cooper stretch his hands out as he begins a half-leap, half-shuffle to avoid the ball. Cooper knows he needs to get out of the way, instead of going for the ball. Good coaching.

Oh, by the way, the fifth guy down the field, who’s celebrating a little prematurely- that’s Thomas Gafford, the long snapper. We need to give Gafford some love. He’s a beast. 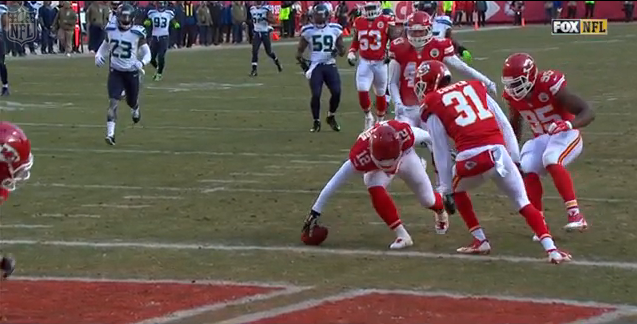 Here’s the great play by Wilson. As he approaches the ball, he decelerates quickly. He is doing everything he can to avoid going into the end zone. If he tries to down the ball himself, he’ll carry it with him into the end zone, because that’s how momentum works. But if he doesn’t do anything, the ball will probably roll back into the end zone anyway. He plants his foot right in front of the paint, and swats the ball out of harm’s way. He loses a few yards by doing this, but it’s the right play- the risk of a touchback is too great.

There are four Chiefs who touch the ball on this play (the ball would bounce off Gafford to Josh Martin), and- very importantly- one that doesn’t. It could easily have become this:

…but it didn’t. Turns out our wide receivers are still making a big contribution even if they aren’t catching touchdown passes.

This might be my favorite play from the week, and De’Anthony Thomas is quickly becoming my favorite Chief.

This is the play that set up the Chiefs’ final and game-winning touchdown. Charles did the heavy lifting, but instead of him, let’s follow De’Anthony Thomas around. 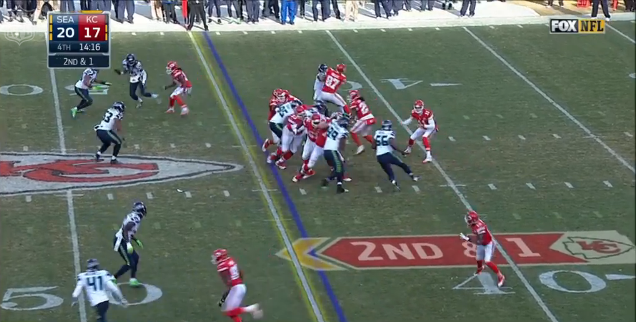 Thomas is lined up as a receiver at the bottom of this picture. He moves towards the sideline as if to take a screen pass from Alex Smith. Smith, to his credit, sells the fake for a brief second by looking at Thomas after handing off to Charles. It’s enough to keep Kam Chancellor out of the play, and by the time Chancellor responds to the run, Dwayne Bowe’s route has put him in perfect position to block the Seahawks’ safety. 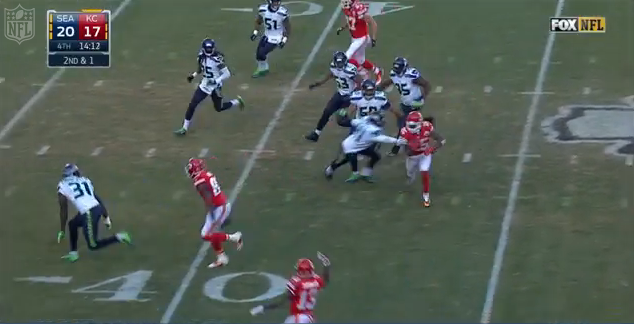 This is, without a doubt, my favorite image from Sunday’s game. Thomas reappears at the bottom of the screen as Charles begins to cut to the left sideline, waving at Charles to come over. It’s as if Thomas is saying, "Yeah, come on bro, I’ll take care of these big bad Seahawks for you." 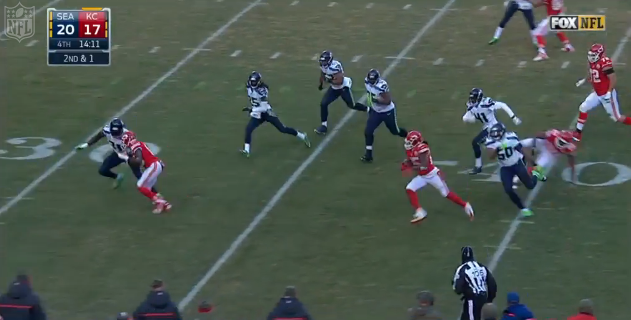 Thomas makes a beeline for the only Seahawk who has a realistic chance of making the play, which just happens to be… Kam Chancellor again. The dude just can’t get a break.

Nobody expects De’Anthony Thomas to get into the trenches with the Legion of Boom. No one’s going to fault him if he can’t get the block, or doesn’t. After playing the role of decoy, he should be effectively out of the play. But he kept up with the play, and made a humongous block that he had no business making.

If Thomas doesn’t make that block, Chancellor corrals Charles near the 30-yard line. As it was, Charles made it to the Seattle 9. Tack on a penalty, and the Chiefs score on an easy run the very next play- and never look back.

Sam Mellinger wrote about this in his column about the Chiefs today, so I won’t cover it in too much detail. This is the Seahawks’ last, best chance to score. They don’t know it yet, but this play essentially determined the game. 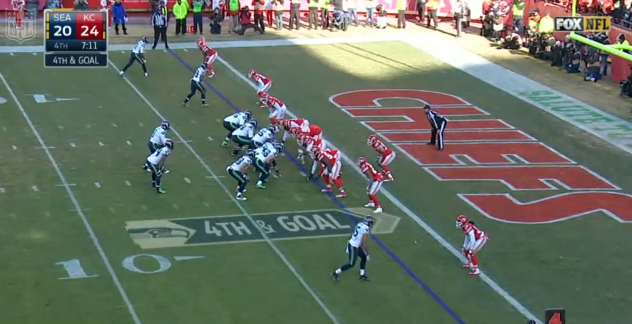 At the snap, Sean Smith is lined up on the far sideline against rookie Paul Richardson, while Gaines is lined up next to him on Doug Baldwin. Is the ball going to an unknown rookie in a crucial fourth down situation? Probably not. I think a pick play’s coming… 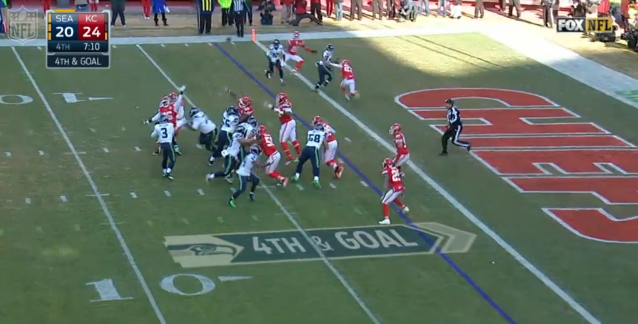 Well, it’s not quite a pick play- Richardson never interfered with Gaines- but it’s close enough. Mellinger says Smith and Gaines had talked about this sort of play prior to the snap. Smith falls off his man to defend Baldwin, while Gaines recognizes this and switches to Richardson. (It looks like Gaines is falling down because this is the exact moment that Gaines plants his foot to switch to Richardson.)

What’s even better? If Smith, Gaines and the rest of the secondary can adapt to pick plays this easily, they’ll have a much easier time defending against the Bronco offense, which, as we’re all well aware, use far too many pick plays.