Andy Reid was hired 1 year ago today, and more things to know before Chiefs vs. Colts

The Kansas City Chiefs go on the road on Wild Card weekend to face the Indianapolis Colts on Saturday. Read on for 17 things you need to know about the game.

Share All sharing options for: Andy Reid was hired 1 year ago today, and more things to know before Chiefs vs. Colts

How to watch the game

1. At 3:35 p.m. (Arrowhead Time), the game will be televised on NBC. It will also be streamed online at NBC Sports. You can listen on the radio at 101.1 The Fox or on Sirius channel 92. Dan Hicks and Mike Mayock will call the game on NBC. The game will not be blacked out in Indy after the Colts needed multiple extensions to sell tickets.

Chiefs are now favorites in Indy

All of our coverage of Chiefs vs. Colts is at the link above.

Game times and TV channels for both playoff games today.

Injuries not a problem for Chiefs

5. Tamba Hali "plans on playing" and the Chiefs are "optimistic" he will play, according to separate reports from ESPN and NFL Network. Hali was listed as questionable with a knee injury. He hadn't practiced fully in two weeks so there was legitimate concern about his availability. But it sounds like he will play.
6. Justin Houston and Branden Albert will return. Both players have been out for multiple weeks. Both likely could have played in Week 17 had the starters played. They're all rested up and ready to return.
7. Eric Fisher will not play. This is not a death blow. Donald Stephenson will start in his place. When Stephenson has played in the past, the level of play along the offensive line hasn't seemed to drop, so folks aren't too worried about this.

Colts are healthy, too

8. Via Stampede Blue: "The Indianapolis Colts are very healthy heading into their first playoff game of the year on Saturday - honestly, they're as healthy as you could possibly be for January football."

Keys to the game for the Chiefs

9. Give Jamaal the ball. The Colts said they expect Jamaal to touch the ball 30 times. He has not touched it 30 times in a game this season.

10. Avoid the turnovers. The Chiefs turned it over four times the last time these teams played. Not happening again.

11. Get off the field on third down. The last Chiefs-Colts game, KC routinely picked up penalties on third down, extending the Colts drives.

12. Special teams or defensive TDl The Chiefs probably need one of those to win this game. Will it be from Dexter McCluster, Quintin Demps or the defense?

13. At least one Chiefs WR needs to step up. Hard to see KC winning if the receivers don't do much.

Here's the weather forecast for tomorrow at kickoff: 72 and dry. #usingtheroof

The referee for Chiefs-Colts is Walt Anderson

15. He called the fifth-most amount of penalties this season. Read more of his stats here.

16. We ran this poll on December 23, before the playoff field was set. 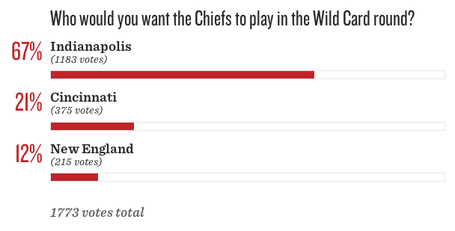 Andy Reid was hired one year ago today