Even though grades come out for NFL draft classes the moment the final pick is announced, most fans realize that a few years are needed to see the real impact of a team's set of picks. Still it doesn't hurt to stop and take stock every once in a while, and Mel Kiper Jr., ESPN's NFL draft analyst, recently regraded the 2013 NFL Draft team by team.

For the Kansas City Chiefs, Kiper's regrade of B- should come as no surprise given what Chiefs fans said right here on AP last April. 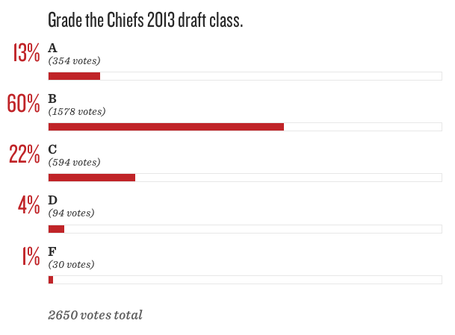 There were three players from the 2013 draft class who saw playing time throughout the season (Eric Fisher, Knile Davis, Mike Catapano). Some players were injured (Travis Kelce, Sanders Commings), some were hardly active (Nico Johnson, Eric Kush) and one didn't even make it to the season (Braden Wilson).

The Chiefs turnaround came on the shoulders of new quarterback Alex Smith and the veteran talent around him and on defense. It was that trade of a 2013 second rounder (plus another pick in 2014) for Alex Smith that keeps the Chiefs' grade that high, according to Kiper.

When it comes to actual picks, Kiper believes the results are incomplete thus far but look lackluster after year one. It's hard to disagree with him.

We knew Fisher faced a tough transition, and simply moving to the right side isn't some transitional cure. It showed. He was better late, but he didn't play to the level of a top pick. Davis could be good, but can he hang onto the ball? Cornerback Marcus Cooper counts with the rookie class, and while he flashed well, he also got exposed badly when he faced better QBs. The Chiefs got a QB, and that helps the grade, but we still need another season or two to see what else they got.

The Chiefs were 20th in snaps played by rookies even with the top pick.

Given the injuries to Kelce and Commings and the lack of playing time for Nico Johnson, it's impossible to weigh in on those picks yet. For now, we'd likely agree with Kiper on the value of the trade for Smith and the incomplete grade for the rest.