The Chiefs authored a beating of Jacksonville in a dominant showing. Even if it's the Jaguars, that's important.

Let's get this out of the way right now: the Jacksonville Jaguars are a terrible team that the Kansas City Chiefs should've beaten.

Everybody reading this understands the sentence above is the truth, but that doesn't take away from the 28-2 beating that Kansas City laid on Jacksonville in its building. The Chiefs put on the most devastating defensive performance I can ever remember seeing in a long time.

Every player contributed from that unit, most notably Dontari Poe, Tamba Hali, Brandon Flowers and of course, Justin Houston. Flowers had an interception to set up one touchdown, Hali picked off a pass and ran into the end zone, Poe was an animal on what seemed like every play, and Houston had three sacks.

I didn't even get to Derrick Johnson and Eric Berry, who tied for the team lead with seven tackles. It was an incredible performance by a team that went 2-14 last season.

Consider this: Jacksonville didn't cross the 36-yard line until the middle of the fourth quarter. It's own 36-yard line.

If Poe continues to play the way he did Sunday, this is a monster defense. When he's crushing it inside like he was, he requires a double-team, opening up lanes for Johnson and giving Houston and Hali a clearer path to the quarterback. This week, rookie Travis Frederick will go against Poe for the Dallas Cowboys. Good luck Travis.

The Chiefs are that good? Or the Jags are that bad? 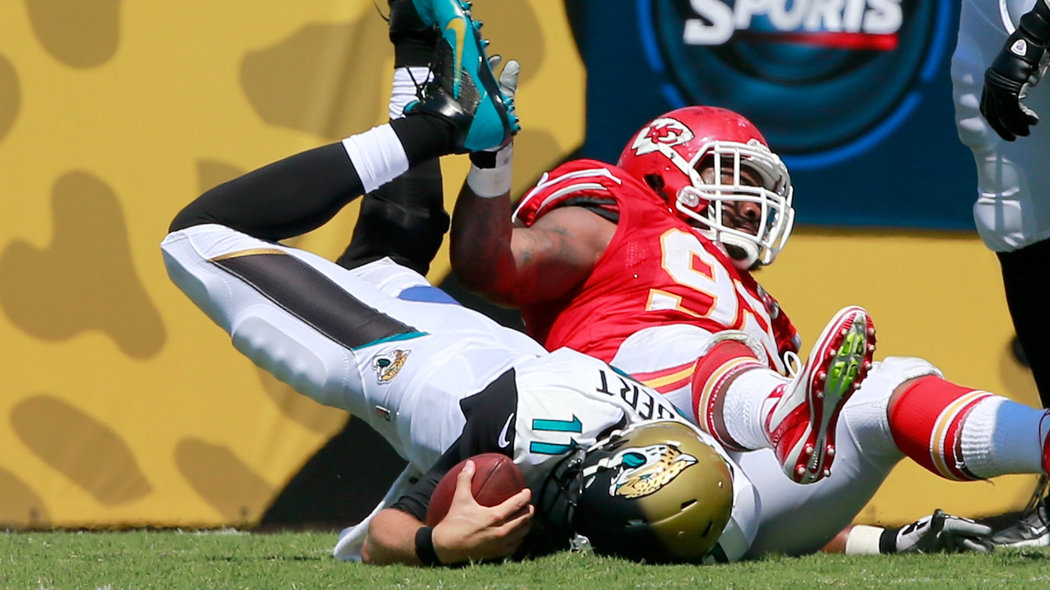 This was an incredibly refreshing game to watch. Kansas City was only flagged for three penalties, none on defense. The Jaguars only rushed for 71 yards on 23 carries, coming out to a 3.1 average per carry. Blaine Gabbert, admittedly terrible, had a 1.2 QBR on Sunday. I don't care who you are playing against, that is some knockdown, epic defense.

Do the Chiefs need some work offensively? Absolutely. I wasn't overly impressed by Alex Smith. Smith is a clear upgrade over Matt Cassel, but he left some throws out there that need to be made. Overall, he was average.

Other aspects could use improvement as well, but let's not forget where Kansas City is coming from. The Chiefs were awful last season, and looked like a legit team right off the bat. Credit John Dorsey, Andy Reid and Clark Hunt.

Going forward, there is actual reason for excitement. Kansas City can compete, that much is clear after watching a full-blown demolition in Week One.

Some will say they beat Jacksonville, big deal. I say they destroyed Jacksonville and looked damn good doing it.