Tamba Hali had an interception returned for a touchdown in the Chiefs-Jaguars game. Read on for pictures and more on the pick-six.

Share All sharing options for: Look at Tamba Hali pick off Blaine Gabbert's pass, score a TD then dance

When Tamba Hali is running touchdowns in for you, you know you're doing something right. That was the Kansas City Chiefs in Week 1 as they crushed the Jaguars, 28-2.

Arguably the best part of the game - -besides Justin Houston's three sacks, and the Chiefs six sacks as a team -- was Tamba Hali's pick-six.

This is how it went down:

1. Luke Joeckel, the No. 1 2 pick in the draft, tried a weak cut block on Tamba, who shut that down right away.

2. Blaine Gabbert was targeting his running back in the flat. 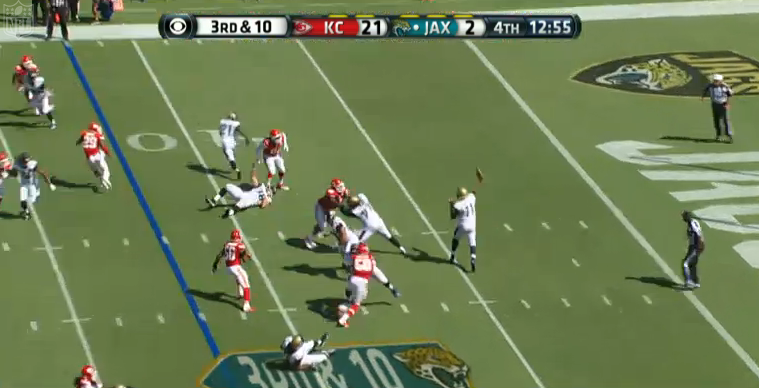 3. Tamba, getting off of Joeckel's block quickly, jumped right in the air to snag the ball fairly easily.

4. Bad block by Joeckel and a bad pass by Blaine Gabbert.

See a replay of it here. And check out the pictures of it above.

I can't write an entire post on Tamba dancing without linking to the greatest night of dancing ever from the Chiefs. Here she is, the 2012 Steelers game on Monday night.