KC Chiefs beat Jaguars, should continue to improve as 2013 season goes along

Even after a dominating win over the Jaguars to open the season, the team can still expect to improve as 2013 progresses.

Share All sharing options for: KC Chiefs beat Jaguars, should continue to improve as 2013 season goes along

There's no denying that the Kansas City Chiefs looked great in their season-opening win over the Jacksonville Jaguars. Not only was the final score laughable at 28-2, but the Chiefs defense would have enjoyed a shutout if not for an early special teams mistake that gave the Jags a safety in the first quarter. Still it was the most lopsided game in Week 1 of the NFL, and the Chiefs have to feel good about where they're at.

That's not to say the Chiefs will not lose a game here and there. Of course, they're likely to lose several or more. They might even lay an egg once or twice and make fans wonder for a week whether or not the team's losing ways are back for good. But once all is said and done on the Chiefs current season, it will likely look like a steady climb toward a winning team. The Jacksonville victory was only the first of many steps forward.

Perhaps the most important reason to expect improvement from the Chiefs is the state of the roster. No single team in the NFL turned over the roster top to bottom this offseason more than the Chiefs. From remaking the entire depth chart at quarterback to the roster cut weekend signings that came just days before the season started, this is still a team in flux. Even as the coaching staff is worried about scouting opponents, they're also scouting their own players.

Even with the stats adding up today in a lopsided victory, the Chiefs are in no way a well-oiled machine. Not even close.

It's that aspect that will only make the Chiefs that much more dangerous in December. As a young team, they'll likely still have the energy and hunger to stay competitive well into the latter weeks of the season. Yet by that time, head coach Andy Reid and his staff will have a much better idea of what he can do with his players. It's that familiarity that will pay dividends down the road.

It was really a sight to behold today watching a player like Dontari Poe come alive along the defensive line. They say the game is won in the trenches and teams with an impact player in the middle enjoy one of the rarest luxuries in the NFL. The Chiefs grabbed Poe in the first round of the 2012 NFL Draft and took a chance he could turn into one such player. After a full season of experience, it looks like he's blossoming as a certain former GM hoped. 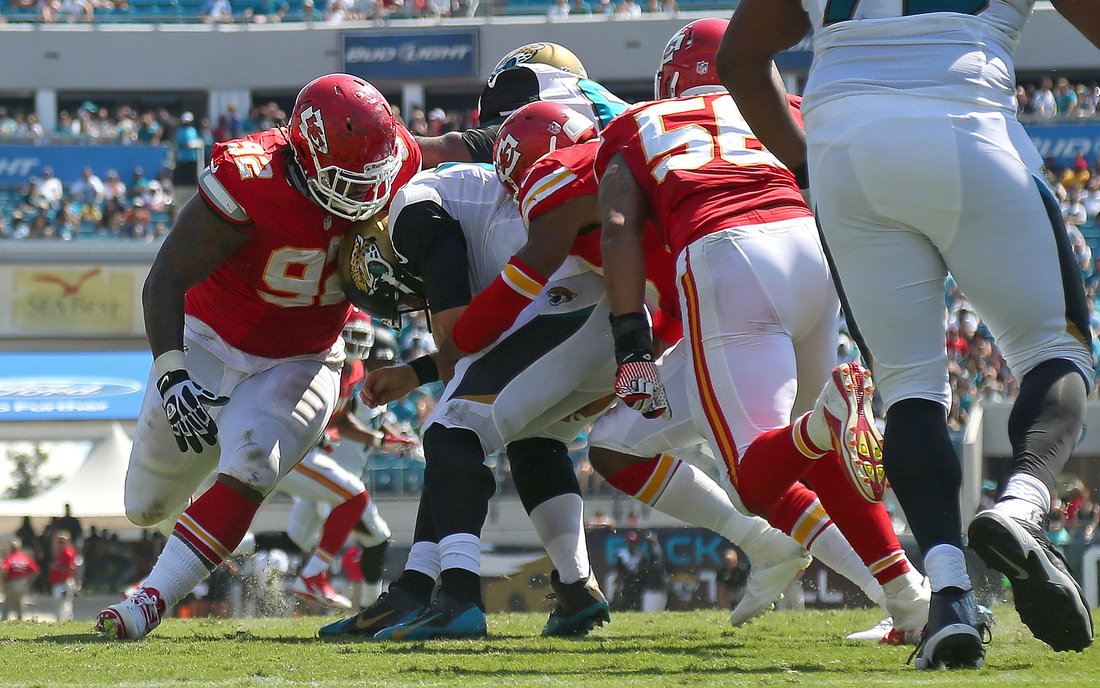 The same can be said for Justin Houston, who has plenty of starting experience now and can work on fine tuning his techniques and rely on his memory against certain opponents. It's that third year burst that the Chiefs can expect from Houston, and he's looking like an elite pass rusher after just one game with three sacks on Sunday in Jacksonville. When defenses have to plan specifically for a player like Houston or Poe -- hint, hint, Jacksonville --  it frees up others to do their job. Luckily the Chiefs have several other Pro Bowl players waiting to step up.

Poe and Houston are the star players to point out because they really stood out against the Jaguars, but the Chiefs are young on both sides of the ball. Much of the offensive line is still learning how to play at the NFL level, let alone the time it takes to come together as a unit. They will gel. Young skill position players like Knile Davis, Travis Kelce and even Junior Hemingway give the Chiefs developing players for Alex Smith to look to down the road. It's just one game but there's reason to believe their technique, timing and talent will carry them further.

It's going to be an interesting season for the Chiefs as they rebound from a dismal 2012 season. With a dominating victory in Week 1, it's clear that the memory of last year will be erased rather quickly. But with a coaching staff still learning and players still blossoming, the team could create exciting new memories sooner rather than later.