The Kansas City Chiefs embarrassed the Jacksonville Jaguars in the first game on the 2013 NFL schedule, 28-2. The Chiefs defense suffocated Blaine Gabbert and the Jaguars offense while Alex Smith, Jamaal Charles and the Chiefs offense were 3-for-3 in the red zone coming off great field position on multiple possessions. This game makes the Chiefs 1-0 on the season with the Dallas Cowboys at Arrowhead next week. Read on for a full recap of the game.

1.The Chiefs got out to a 21-2 second quarter lead and never looked back. This game was over early on.

2. The Chiefs defense was outstanding as KC's defense racked up six sacks and a touchdown by Tamba Hali following an interception.

3. The Chiefs offense benefitted from short fields but we didn't learn a whole lot about them today.

4. Justin Houston had three sacks. He looks like a star.

5. Jamaal Charles hurt his quad but it doesn't look serious. He even returned for one play after it happened. He ended with 77 yards on 16 carries.

6. Blaine Gabbert is not a good NFL quarterback.

The Chiefs wore their red home jerseys in Jacksonville.

Jon Asamoah did not play. Geoff Schwartz started in his place.

Allen Bailey did not play due to his father's death this week.

All eight Chiefs who did not dress.

84 degrees at game time. Andy Reid was in a red windbreaker.

The Chiefs forced a three-and-out on the Jaguars first drive. Blaine Gabbert scrambled on a third-and-5 and the refs ruled he fumbled the ball, recovered by the Chiefs. But a review reversed the call, forcing the Jaguars to punt on fourth down.

First offensive play: Fake handoff and a rollout to the right, Alex Smith went deep to Anthony Fasano, barely missing him. Incomplete. The Chiefs went three-and-out on the first drive.

Branden Albert went down with a foot injury.

Dustin Colquitt's first punt attempt was BLOCKED! The ball went out of the end zone, resulting in a safety. The Jaguars take a 2-0 lead. It was the Jaguars first safety since 2008.

On the next defensive series, Justin Houston sacked Blaine Gabbert. Welcome to the NFL, rook.

Donnie Avery scores the first touchdown of the season with a five-yard touchdown reception from Alex Smith. The Chiefs take a 7-2 lead with nine minutes left in the first quarter. KC was terrible in the red zone last year so that drive -- a quick one, just three plays and starting on the Jaguars 24-yard line  -- was encouraging. 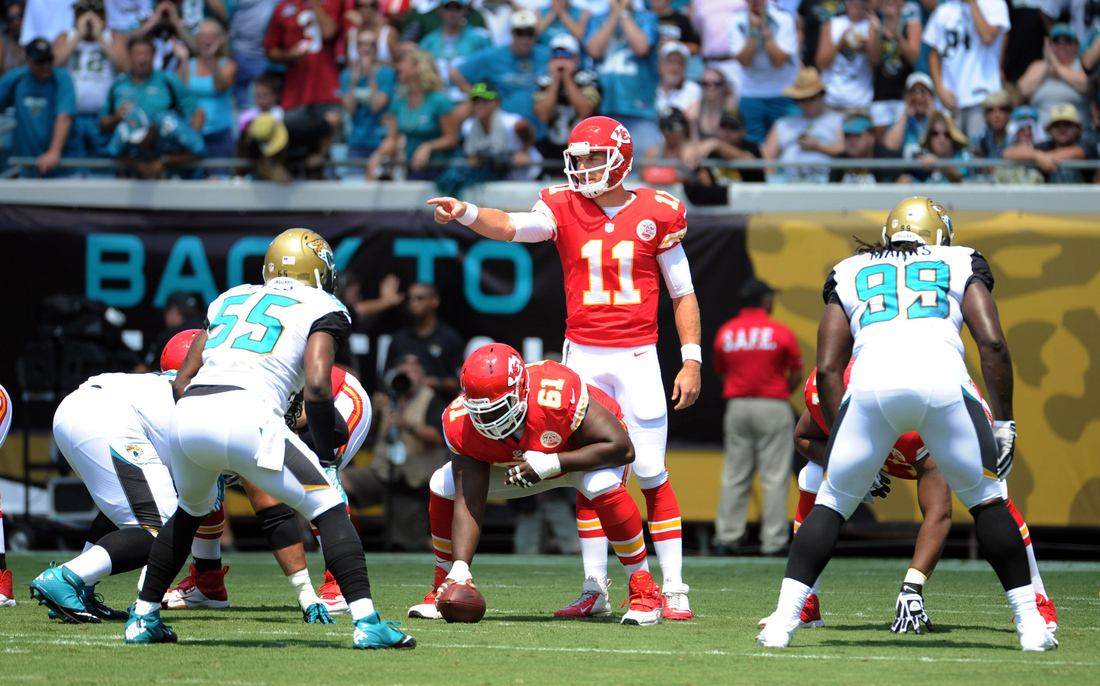 Alex Smith goes to Avery on two third down chances -- he caught one for the first and the second one was incomplete.

Blaine Gabbert completes a nice to ... Brandon Flowers! Turnover! Flowers returns it 32 yards to the Jaguars 21-yard line. On the next play Jamaal Charles bursts up the middle 18 yards.

From the 3-yard line, Alex Smith hits Junior Hemingway in the back of the end zone. Touchdown Kansas City! Chiefs lead 14-2.

After one quarter, this is how I feel:

For those of us sentenced to watching #Chiefs the past two seasons, this is unrecognizable. Jags are what #Chiefs were

Jaguars are averaging 1-yard per play

Alex Smith showed his mobility rushing for 13 yards on a 2nd-and-17, but the Chiefs had to punt away with their first possession of the second quarter.

Gabbert just lined up as a WR. Denard Robinson was at QB.

On a 3rd-and-5, Alex Smith scrambled for the first down, putting the Chiefs in the red zone. Two plays later, Jamaal Charles punched it in for his first rushing TD of the season. Chiefs lead Jaguars 21-2 with 6:26 left in the second quarter. 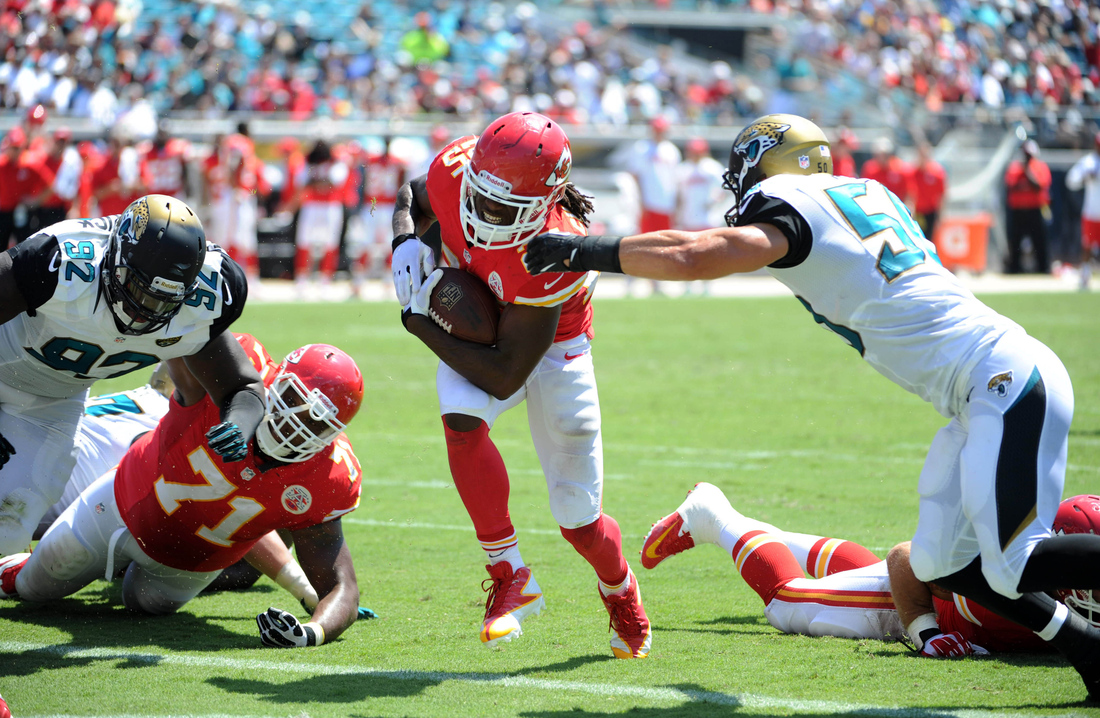 Even Tyson Jackson is getting in on the sacks! The first half then ended, fittingly, on a Dontari Poe sack.

Don't know if you could tell on TV but lot of empty seats during first half. Would think this place will empty out soon. Won't take long

3rd-and-long is turnover territory for the Chiefs defense. Justin Houston sacked Gabbert for the second time -- and fourth overall for the Chiefs -- on 3rd-and-19.

Jamaal Charles exited the game with a quad injury. It did not appear to be serious. He walked off on his own and was riding the exercise bike, which led to speculation that it was just a tight muscle. By the end of the third quarter, he was back in the game.

Brandon Flowers had a pick-6 called back. The ball bounced off the ground and Flowers picked it up. He ran it back for a touchdown but the review brought it back.

Now Eric Berry getting in on the sack party. That's five sacks for KC's defense.

Halfway through the third quarter:

Jacksonville has yet to cross the 50yd line on offense. #Chiefs 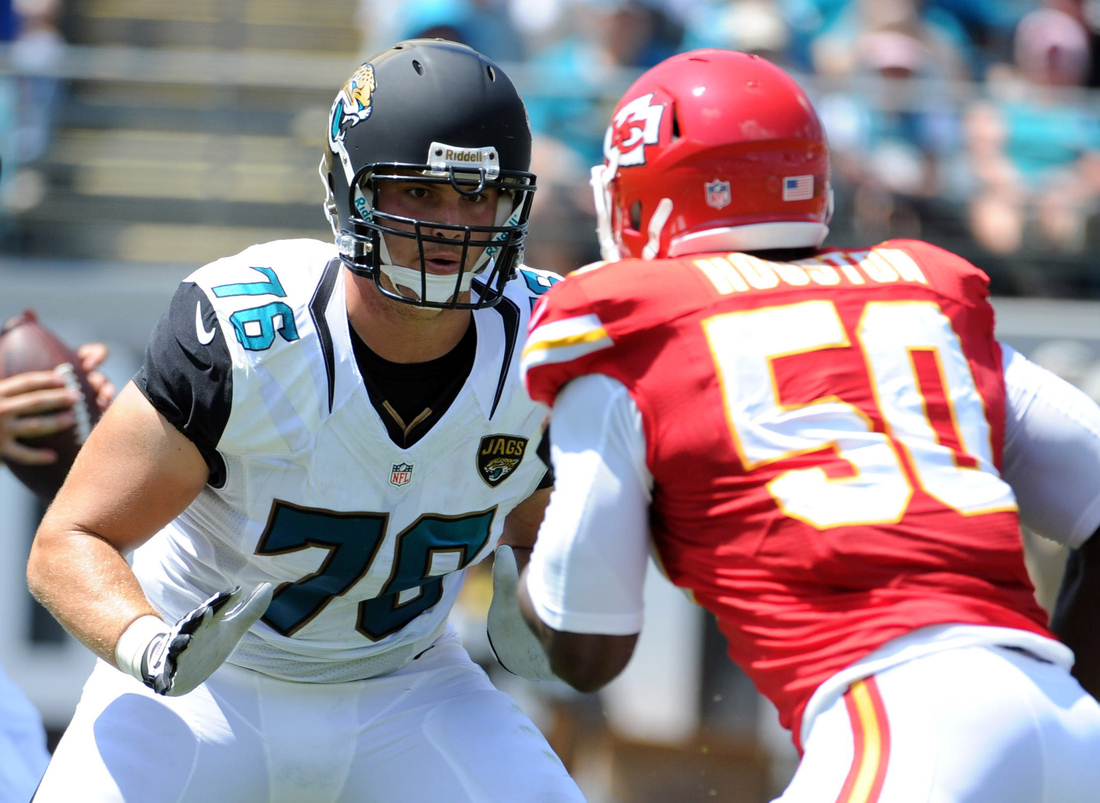 TAMBA! The Chiefs LB picked off a Gabbert pass and returned it for a touchdown from 10 yards out. Wow. That is Tamba's second career interception.

One of those days for the Jaguars...

Anger on to punt for 11th time, setting a franchise record for most punts in a game.