It feels funny writing you like this.  See, I just got out of a really, really bad relationship.  My last quarterback, despite looking the part and saying all the right things, just kept relapsing into the same bad habits over and over again.  He would spend all his time running around instead of looking at all the receivers like I asked him.  He'd throw the ball aimlessly around the field (he even hurt my good buddy Dexter doing it!  I was so blind!).  He wouldn't even put his hat on right.  So I guess what I'm saying is, I'm feeling pretty vulnerable right now.

A lot of my friends are telling me I'm making a big mistake here, but I really want to believe in us.  I think you have what it takes to be very good quarterback material.  I know I probably shouldn't have, but I talked to a few of your ex fans.  Some of them are really mad at you, but most of them... well honestly, I'm a little uncomfortable talking to them, because I don't think they're entirely over you (even with that new quarterback they're always out and about with).  How highly many of them talk about you gives me a lot of hope for our future, Alex!

There's a couple things I need to talk to you about before I can make myself completely vulnerable, though.  Like I said, I've been hurt before.  And you know, that first cut... it's the deepest.  Someone should write a song about that, but I digress.

First, I need you to know that the most important thing in the world to me is going to be consistency.  I need you to be the same guy every week, Alex.  That's the only way this is going to work.  I can't deal with any more of the roller coaster.  Sure, that was fine for me when I was 23, but I've grown up.  I've matured as a fan.  No more of these "highs and lows."  maybe that sounds a little boring, but like I said, I'm not a kid anymore.

No more of these "highs and lows."

The second thing I need you to think about is a big change I need you to make before I can get serious.  Alex, I love the fact that you make good decisions on the field.  However, I need you to realize that the SAFE decision isn't necessarily always the BEST decision.  Now, don't get me wrong, I don't want you to start playing like Rex Grossman out there or anything.  I really do appreciate how careful you are with the football.

And really, I understand how you got to be this way.  I mean, your first season went horribly, horribly wrong.  I won't even bring up the stats from that year because I'm sure it's painful for you to think about.  But ever since then, it seems like you (either by your own choice or because it's what you were told to do) always make the "safe" play.  When the TE is open 5 yards off the line of scrimmage, you go there right away.  I totally get it.  people were down on you about interceptions, so you did everything necessary to make that complaint go away.  I need you to know I respect that and want you to keep a lot of those tendencies. 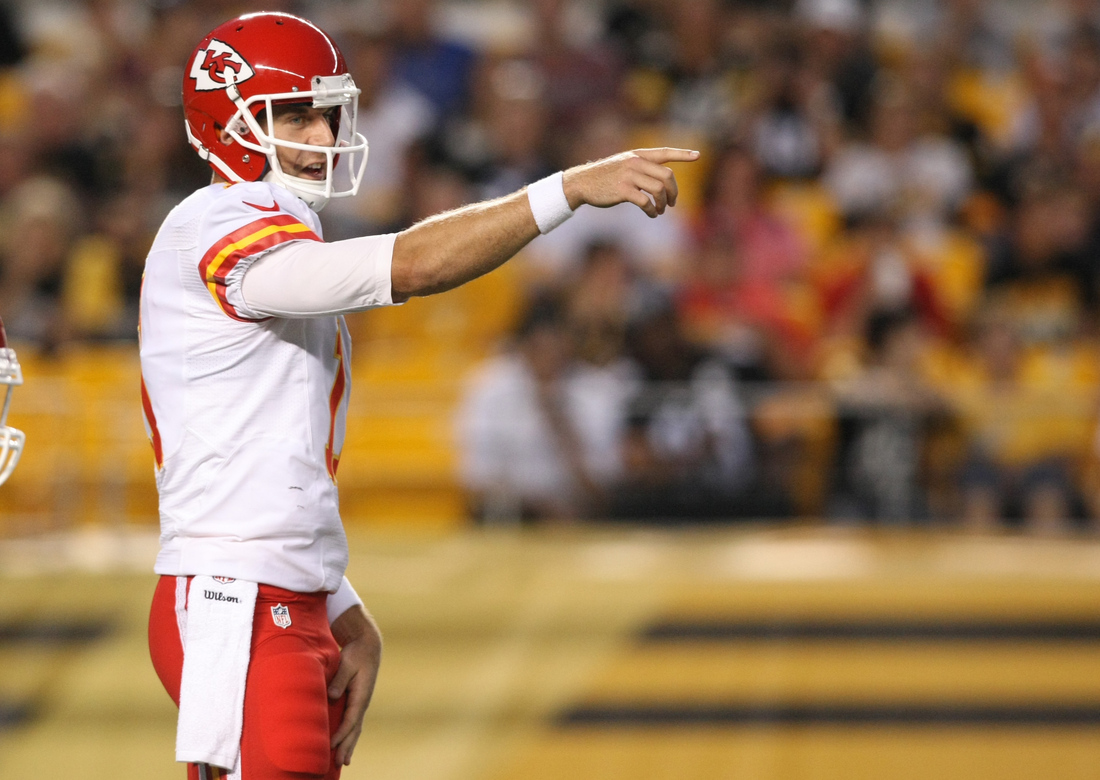 What I need you to do, though, is build on top of what's already there.  Watching you play, you clearly know how to read a defense.  You clearly are able to go through reads and identify the open man.  And what you do now is find the most open guy and throw him the ball.  That's great!  But we need to take one more step.  I need you to learn to think more like this...

Now, do I want you to do that EVERY time?  Absolutely not.  I very much value avoiding turnovers.  But there's a big difference between a throw that is "more risky than the absolute safe throw" and a throw that is genuinely "high risk." I need you to start noticing the difference, and acting accordingly.

Alex, the difference between a decent quarterback and a good quarterback are those little extra things.  And in your case, that little bit extra will be realizing that a good decision isn't always the best decision.  Does that make sense?  You're a smart guy, Alex, think of it as math.  Maybe a throw is 15 percent less likely to succeed.  But if it succeeds it's going to gain an extra 15-20 yards.  Depending on the situation, that's a risk worth taking a lot of the time.

I'm not saying I want you to change who you are, Alex.  I won't get involved in another fan-quarterback relationship again where I'm hoping for total change (really, that last quarterback did some major damage.  I think it's important you know I'm carrying baggage).  I'm asking that you take advantage of what you already know how to do and start doing it a little more dangerously.  Just a little, mind you.  I don't think I'm asking for too much there.

On a last note, the final thing I need from you is to get along with my friends.  Especially Dwayne.  Dwayne is extremely important to me, Alex, and that's not going to change.  It's a big deal that you and him develop a bond, and I swear that's what will be best for you and me in the long run.  So get together with Dwayne a few times.  Get to know him.  Throw him the ball even if he seems somewhat covered.  Because I promise you, Dwayne will come through in for you in the hard times.  Because really, all Dwayne has ever known are hard times.

I'll admit it, I'm scared.  Scared to trust another quarterback.  Scared that everything is going to fall apart like it did with... with... well, there's no need to say his name, is there?  Just know that you hold my hopes and dreams for this season in your hands, Alex.  Do the things I've asked of you and I swear this will be something special.

Sincerely (and not at all creepily)