Giants vs. Chiefs: The best and the worst

His Dirkness recaps the Chiefs 31-7 victory over the Giants with the best and worst moments of the week.

Share All sharing options for: Giants vs. Chiefs: The best and the worst

Also of note, the Chiefs be salsa'n.

Bernard Pollard danced once upon a time.

You should be dancing. Yeah.

The Best And Worst w/ His Dirkness

Best form of magic inside Arrowhead Stadium - The punt return TD. A quick history before we get to the biggest play of this quarter-old Chiefs season:

2003 vs. Broncos - Dante Hall. My favorite Arrowhead Stadium memory of all time.

2010 vs. Chargers - Dexter McCluster. My second favorite Arrowhead Stadium memory of all time.

2013 vs. Giants - Dexter McCluster. Again. Oh, that spin move. Ohhhhhh, that last cut. Somebody get me a sweater, I've got chills on top of chills.

Best way to slap your reputation upside the face - Andy Reid challenging the spot. Short of the first down, Giants punt, RUn DMc (earning that nickname) touchdown return, blouses. Reid has built a reputation as something of a punchline for his game management skills, mostly from timeout usage and bad challenges. But we have yet to see this in KC, outside of a minor issue before halftime last week vs. Philly. Perhaps, Big Red is doing more with less on his plate this season ... yeah, there's a joke in there somewhere.

Best evidence to support an unsolved Chiefs mystery - I present to you - Jamaal Charles' rushing yards by quarter over the last three games:

Look, I don't get it. I have very little explanation. Jamaal has fresh legs while the defense is worn down in the 4th quarter, maybe? That's the best I got. However, I am convinced after this week that the Chiefs running game woes are more of a "can't run the ball" problem than a "won't run the ball" problem, if that makes sense. That is, until the 4th quarter, when they both can and will with surprising ease.

Best endorsement of the Chiefs new General Manager - All of the unheralded players stepping up and contributing to victories this season. They're all John Dorsey's guys. A quick look at some of the players he brought in off the street just this year...

Look, it's too early to call the John Dorsey hire a home run because so much of his job is dependent on the Draft (which means, you won't really get an accurate read for another 3-4 years). But he's off to one hell of a start.

Best defensive stat of the game - Giants: 1-14 on 3rd downs. Not to mention, all three turnovers forced by the Chiefs defense came on 3rd down. Compare that to the Chiefs' 9-16 3rd down conversion rate, and you're looking at the difference in a game that was closer than the score indicated.

Celebrate 4-0 with the Amateur Hour 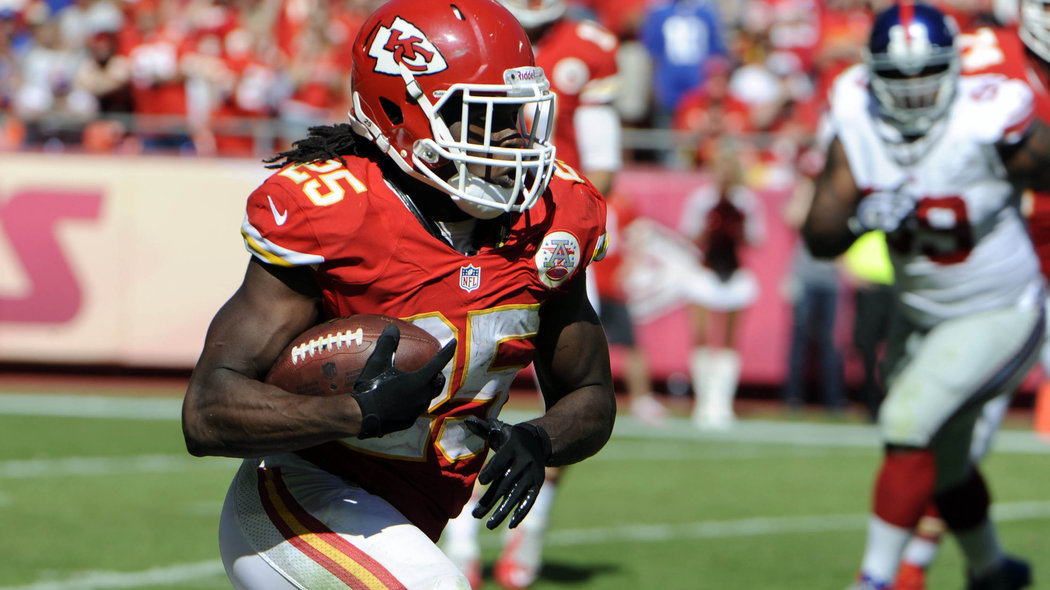 Best defensive stat of the season - Opposing QB's have completed less than 50% of their passes in 3 of 4 games against the Chiefs defense this season. Well....Blaine Gabbert, so 2.5 really.

Worst new trend in football - The butt fumble. Why do I keep seeing this happen this season? How can a center not know if a QB is under center? Shouldn't he feel Alex's hands all up in his undercarriage? Hell of a way to break a 3-game turnover-less streak.

Worst predicament for opposing offensive coordinators - Trying to block Dontari Poe, Tamba Hali and Justin Houston. You can't do it. It cannot be done. Hungry Hungry Hip-Poe goes back for second and third helpings the first two weeks of the season, and will now draw double-teams from now to eternity. The Giants paid extra attention to Houston this week, leading to Hali's breakout game (2 sacks, FF, intentional grounding credit, not to mention he was clearly held on the only TD allowed). So go ahead and pick your poison, but you can't block all three of them. And so long as the three are healthy, the Chiefs will have a Top 5 defense.

Best call - Giants field goal attempt: Wide left. Are we sure about that?

Worst call - Dustin Colquitt's blocked punt. Are we sure it was blocked?

Going to Nashville for next week's clash with the Titans. I plan to meet up with any and all APers before the game, which is getting organized here.