As we did last week, let's take another look at the KC Chiefs 2013 schedule now that we know more about the Chiefs and their opponents.

Share All sharing options for: Re-assessing KC Chiefs 2013 schedule after the 4-0 start

All of a sudden, you start wondering. The Chiefs are 4-0. How far can they go?

I predicted before the season the Chiefs would be 9-7 on the year but I did not expect them to be 4-0 to start so things have changed a little bit. Last week we took a peek at the schedule with a better understanding of who the 2013 Chiefs are now than they were in April when the schedule came out. This week we take another look at the schedule again with 4-0 on our mind.

The Chiefs are already favored in some places over the Titans. They likely will be favored over the Raiders as well.

The 2nd quarter of the season 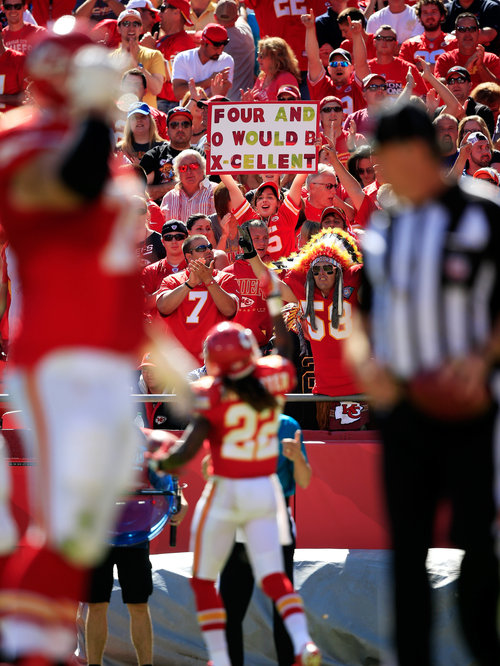 On paper this is the game that everyone is watching. The Texans are 2-2 but they are a good team. This will be one of the biggest tests all season for the Chiefs. Behind the two Broncos games and maybe at San Diego and the Colts game, this is one of the tougher games all year. KC has shown they can compete. This one will be fun.

Gotta win these, right? The Chiefs have lost games like this in years past. What I like about this team is that they seem like the type that will beat the teams they should. Maybe they struggle against the Texans, Broncos or Chargers, but they should win games like this because they're not giving games away anymore.

There she is. Via Peter King: "It is ridiculously early. But in seven weeks, on Nov. 17, there could be a beautiful game in Denver: The 9-0 Broncos hosting 9-0 Kansas City." Also of note is that Andy Reid is 13-1 after the bye. Seems important.

Protect that home-field advantage. It has been non-existent in recent years. It HAS to be a major focal point of the Chiefs 2013 season. History says the Chiefs are usually good at home in years they make the playoffs.

These are all winnable but I'm not at the point yet where I'm feeling overly confident on the road, especially in San Diego, where the Chiefs always seem to lose.