The KC Chiefs beat down the New York Giants in Week 4 to move to 4-0 on the season. The Arrowhead Stadium crowd was very loud as the Chiefs won the game, 31-7. It was a tight game until Dexter McCluster's second half 89-yard punt return touchdown blew it open.

Erin Andrews: "It is LOUD here (at Arrowhead) by the way." ...12 minutes before kickoff. #Chiefs 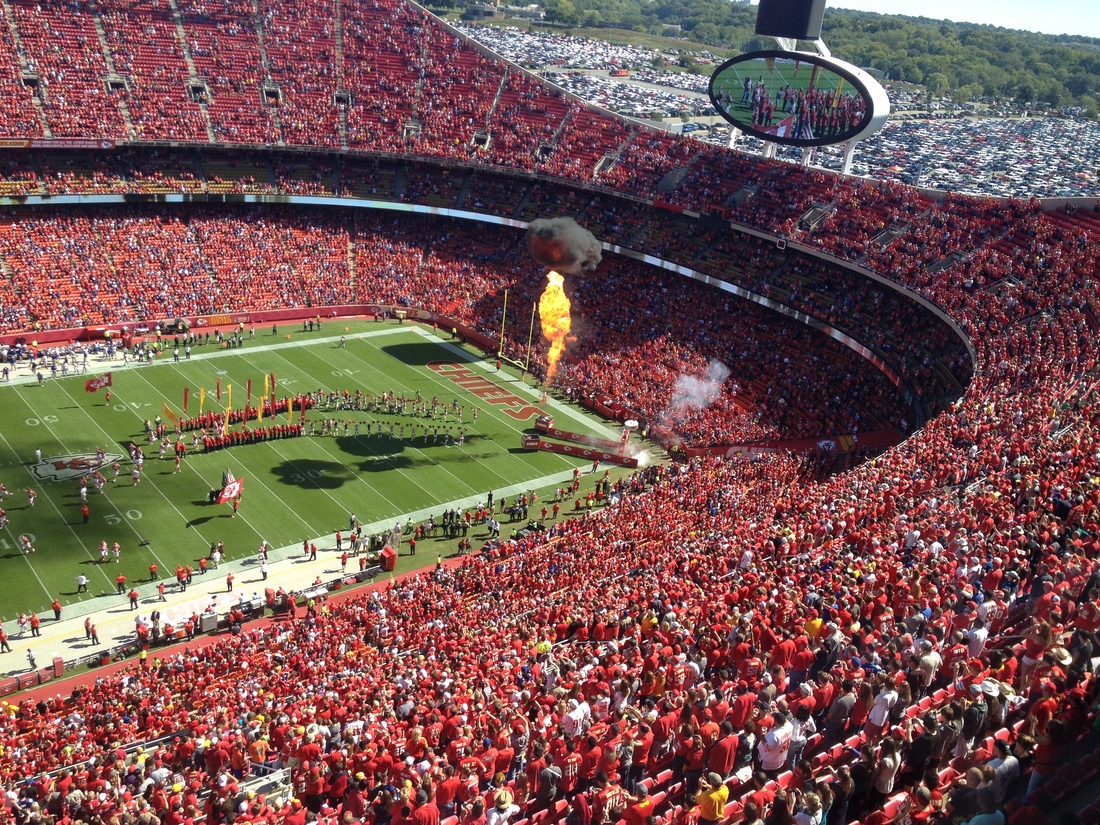 Brandon Flowers ruled out for the game. Marcus Cooper got the start in his place.

Chiefs first drive: Chiefs punt after one first down and six plays.

Chiefs lined up in the pistol on the first play.

They also lined up in an empty backfield with five-wide.

Of course they're starting inside their own 10 because Dustin Colquitt.

The Arrowhead crowd was LOUD on the Giants first drive. It felt like the fourth quarter out there.

KC starts on their own 34-yard line.

A holding call moved the Chiefs back 10 yards.

Giants second drive: It's another punt.

The Giants tipped Colquitt's punt and ran into him. Colquitt stayed on the ground for a few seconds and limped off. He came back later in the game, however.

Giants start on their own 37-yard line.

Holding call pushed the Giants back to first-and-20. 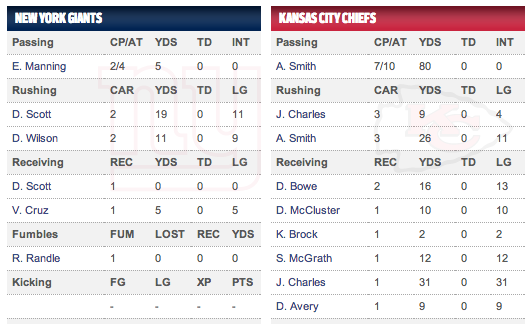 Chiefs start this drive on their own 2-yard line.

Alex Smith ran the ball once again as the Giants defense dropped back without paying attention to him.

A defensive pass interference gave the Chiefs a free 16 yards.

A Giants DB lost track of Jamaal Charles and Alex Smith found him for a 31-yard gain into the red zone.

Alex Smith found Sean McGrath in the end zone for a five-yard touchdown. 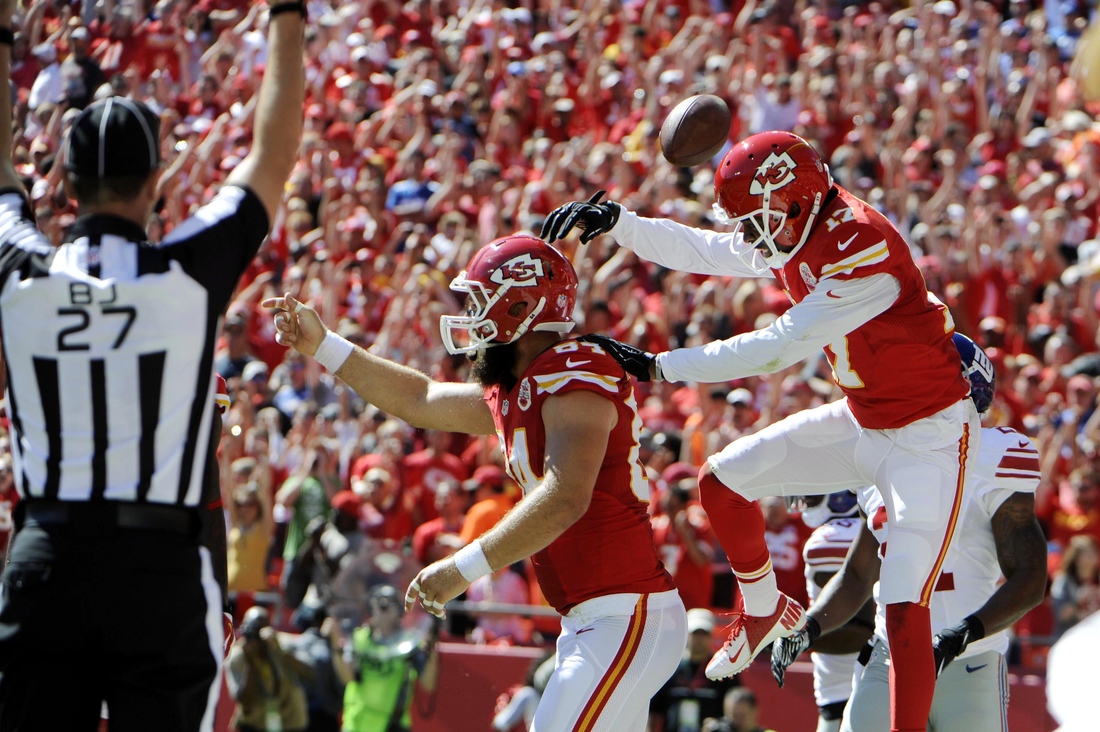 Speed. Victor Cruz simply beat Dunta Robinson with his speed and ran past him for the TD.

Chiefs fourth drive: Chiefs punt it after a drive that included two third down conversions.

Colquitt was out for the punt. He did not look comfortable but still landed it inside the 20-yard line.

Giants start on their own 11-yard line.

Marcus Cooper now playing on the outside in the base defense. Dunta Robinson in the nickel.

Chiefs fifth drive: Turnover. Fumble sends it back to the Giants.

A bad snap from the center resulted in the Chiefs FIRST turnover of the season. Giants get it back.

Allen Bailey drives Eli into the ground for the sack. Best of all, it came on third down. KC getting it back.

Sean McGrath went down with an injury. The only healthy TE behind him is Kevin Brock.

Chiefs seventh drive: KC downs it to end the first half. 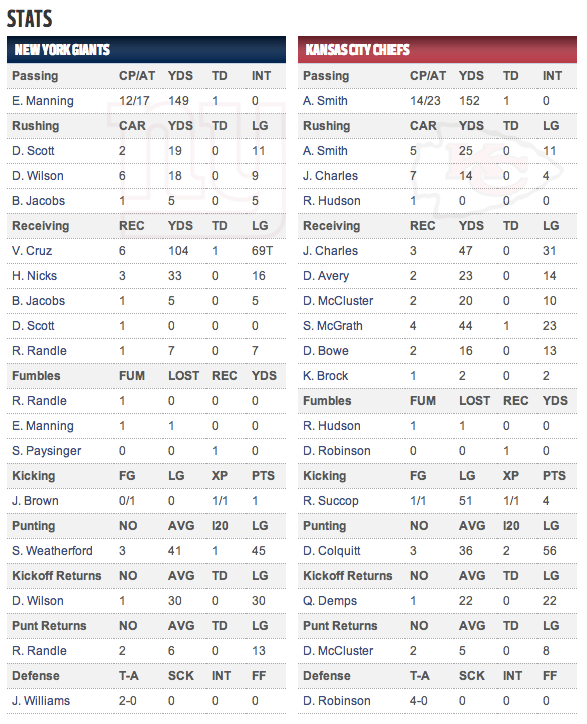 Eric Fisher has a head injury. Donald Stephenson replaced him at RT.

That INT looked like it might've been D-Bowe's fault. Or miscommunication.

Chiefs start on their own 20-yard line.

Chiefs offense continues to have problems running the ball.

Giants ninth drive: Interception. Chiefs get it back.

Chiefs start at their own 20-yard line.

The Giants faced a 3rd-and-19 and you just knew he was in trouble. Eli went deep but the WR cut his route off early. Quintin Demps picked the deep pass off and returned it for 17 yards.

Chiefs 10th drive: Turnover. Again. Alex' pass to Jamaal is picked by Antrel Rolle on a ball that bounced around a few times. The review was upheld.

Chiefs 11th drive: Another punt after another three-and-out.

KC starts from their own 30-yard line.

Eli Manning completed a pass on 3rd-and-18 and the refs gave him the first down. Andy Reid challenged the play and the ruling was REVERSED. That was a HUGE play because it allowed the Giants to punt, which then brought on the DMC touchdown.

That challenge by Andy Reid. How big was that? Brought NYG punt team on, then DMC time

Giants 12th drive: After a six-play drive, the Giants punt it away. 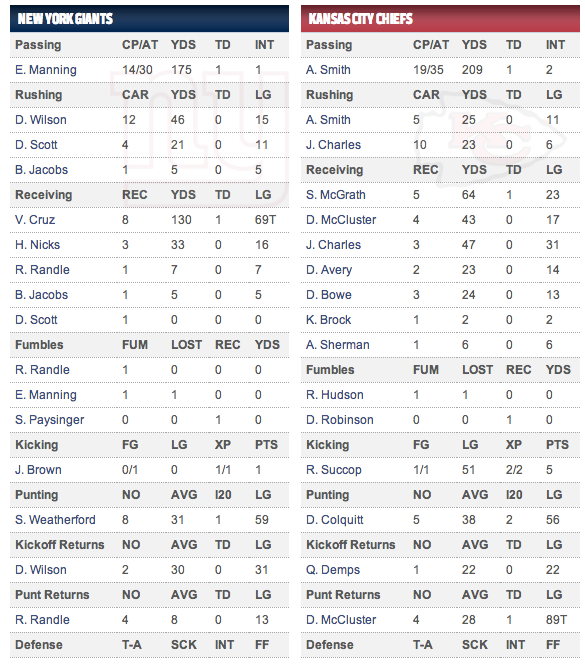 Chiefs started this drive at the start of the fourth quarter.

Ryan Succop kicked a field goal, which was good. But a penalty on the Giants gave the Chiefs fresh life.

Giants need a stop badly and they let Kevin Brock, signed less than 2 weeks ago, rumble 25 yards for first down. Man.

Giants start the drive from their own 5-yard line with three minutes left in the game.

Tamba picked up another sack. That's two on the day.

The Giants are a complete mess. 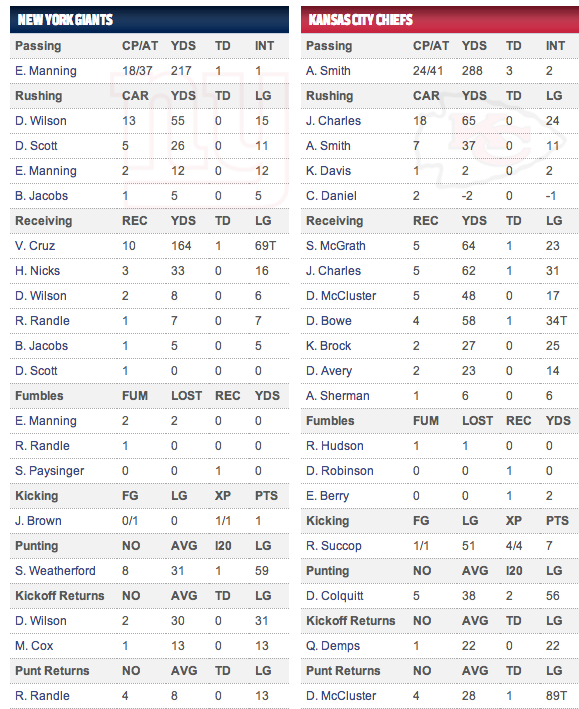 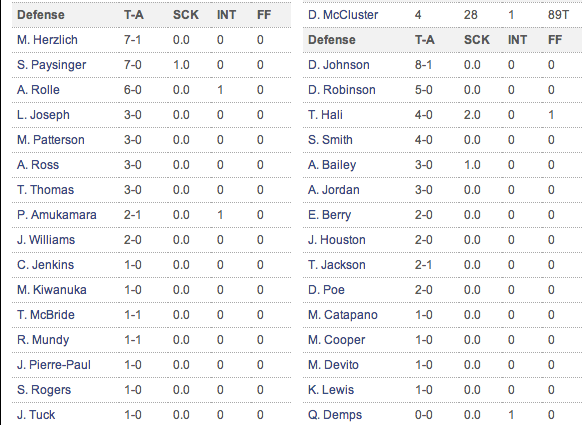 Editor markup for Photos: D-Bowe does the salsa, DMC runs wild and Manningface. This is only visible in the story editor.