A more in-depth look at the play that may well have kept the Kansas City Chiefs undefeated entering Week 4.

Alex Smith is a game manager.

It's not really up for debate. He's a guy who can read defenses and make accurate throws, make no mistakes. But by and large he uses those skills to manage games. He's not a gunslinger, and very (VERY) likely never will be. There's absolutely no doubt about it.

It was best said by AP regular Brskr. To loosely quote (and by that I mean say in my own words what I remember. Kinda like a move "based on" a true story... it may or may not be accurate) him....

The more I've watched Smith this season the more accurate I've found that line of thinking to be. Smith, for better or worse, makes the throw with the least risk any given play. This is a good thing the majority of the time, and you can really see the logic employed by the intelligent Smith.

"Why should I make the tougher, more risky throw when there's an easy throw available? Let's take the 5 yards, and maybe the receiver will make a nice play and make it more."

You can almost see him thinking that as he consistently plays it safe with throw after throw. And he's very, very good at it. Not turning the ball over is, in fact, a major skill and a major asset to a winning team. Being able to pick up positive yardage consistently is a good thing.

But sometimes the safest throw isn't the best throw.

I'm not sure whether Smith will ever be a guy who consistently does that. But last Thursday ... that's exactly what he did.

Let me just state for the record that I'm not sure whether Smith will ever be a guy who consistently does that. But last Thursday, when the stakes were highest. That's exactly what he did.

Let's recap the scenario. The Chiefs are up by a touchdown after a big TD run by LeSean McCoy (MAN is that guy good). Dexter McCluster (who is starting to lose my support, but that's for another column) muffs the ensuing kickoff. The Chiefs proceed to do zilch on their first two downs (with Smith taking a sack on 2nd down), and now it's 3rd and 10. The Eagles' crowd is losing its mind. Let's walk through the play step by stop. 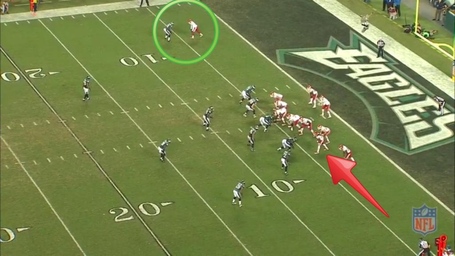 So here we see the Chiefs at the snap. Donnie Avery is circled at the top of the screen, and Dexter McCluster is indicated with a red arrow ('cause Chiefs, right?). Dwayne Bowe is lined up outside of Dex. We see Jamaal Charles is next to Alex Smith and The Beard (Sean McGrath) is lined up next to Branden Albert. Obviously, there are going to be tons of routes being run on such a crucial down, right? Well... not exactly, no. 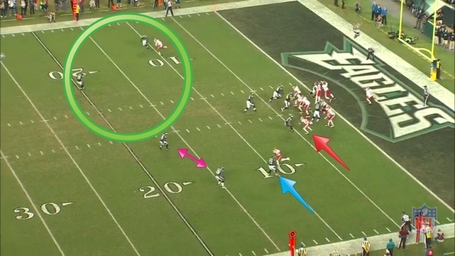 So after the snap it becomes clear the Chiefs are worried about protecting Smith (as well they should have been, with the way the o-line was playing). JC and The Beard are both staying in to pass protect. I've got a bunch of pretty arrows and a big circle. I swear, this isn't just because I was having too much fun tinkering with photobucket (OK, that's partly it). There are things to see here.

First, with the red arrow we see Dex starting out on his route. He chipped No. 55 on his way out, showing even more respect to the Eagles pass rush. .

What is clear, though, is that the Eagles were definitely keying on Dwayne Bowe. The blue arrow shows Bowe being tightly covered, and the purple "double arrow" shows two Eagle defenders in the vicinity (well, one in the vicinity and one hovering kinda vicinity-adjacent).

At the top of the screen I've circled Avery, who is being man-covered (like Bowe) but only has a safety over the top helping his defender (unlike Bowe). It would appear (without being able to ask Andy Reid) that they were looking to get Avery in a favorable matchup by keeping most of the defenders in the box or on the other side of the field. 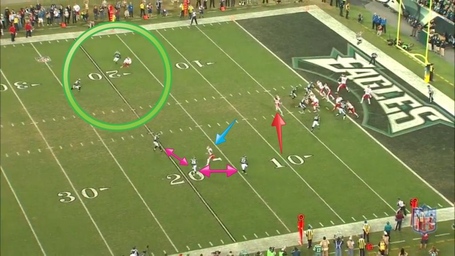 As you can see with the blue and purple arrows, Bowe is now completely blanketed by multiple defenders. He's not an option. The rest of the field is where it gets interesting.

The red arrow shows Dex having made it past the linebackers (who are looking to blitz at this point, it would seem) and has quite a bit of open space in front of him.

In the meantime, Avery (circled) is just starting to make his break into a dig route (when watching, it looks a little "slant" to me as well.). He's gained a little bit of separation, but you can see the safety over the top is starting to move in his direction, anticipating a throw over the middle.

There are two throws available to Smith here. One which is (I'm guessing) his first read, but with the receiver in much tighter coverage and a safety about to make that window much smaller. The other (which looks more like a check down option) is a guy who is about to be wide open but is well short of the 1st down and will have defenders in between him and the 1st down if the throw is made his way.

Based on my experience with Smith, I would expect him to make the second throw. It's a much more safe, low-risk, easy throw to make. Additionally, Dex does have a lot of open field to move and has at least a 50/50 shot at getting the first down. With the safety closing toward Avery and the CB close behind him, there's only a very tiny window into which to fit a throw to him without a pick, a pass knocked down, or Avery getting absolutely blown up by the safety.

And this is where Smith surprised the daylights out of me. 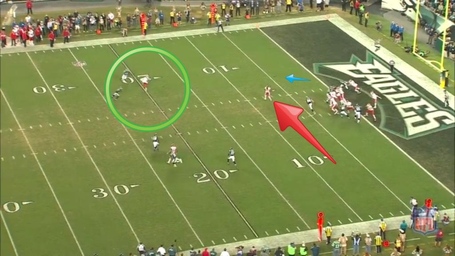 Smith chooses the more difficult, riskier throw. The blue arrow is tracking the ball. With the red arrow we again see that Dex is wide open. And in the circle we can see the safety and CB continue to shrink the window into which the throw can be made.

With the way the safety breaking toward Avery, a throw leading him would have been a pick or Avery's funeral. Literally the only thing to do is place the throw on Avery's back shoulder. Of course, that carries the risk of being a yard off toward the sideline, which means instant interception. This is the kind of throw Alex Smith just doesn't make when there are safer options available. Except this time, he does. And it is absolutely the correct decision.

This was a case of Smith, rather than doing the safe thing and trusting his receiver to make a play, chose to bet on himself and his ability to make a difficult throw.

You can see in this picture, once the ball is in the air that even though Dex has plenty of space in front of him, Avery's defenders would have been able to see the throw and would have been well in position to stop him from getting the first down. Sure, he's got a chance. But the throw to Avery, if completed, IS a 1st down. This was a case of Smith, rather than doing the safe thing and trusting his receiver to make a play, chose to bet on himself and his ability to make a difficult throw.

To really emphasize just how small the window is to throw to Avery, take a look from another angle just as the ball is arriving. 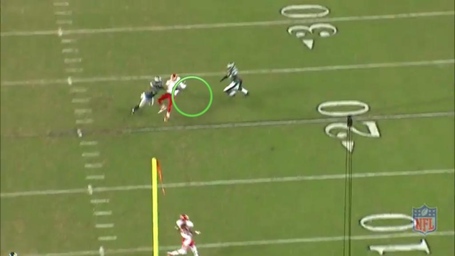 I made the circle to indicate the area where that throw can safely be made without a pick, knockdown, or crushing hit to Avery. And really, the bottom half of that circle, if the ball goes there, is an incredibly tough catch.

Of course, you all saw the play, so you know that the ball ended up right where Avery could make the catch without doing his best Jerry Rice impression (it was still a nice catch, though). But the throw itself isn't really the point. The point is that window.

That is a SMALL space to try and fit the ball on a 15 yard pass that you have to put everything into (Smith had to rifle it in there to prevent the closing defender from making the play). That's a tough, tough throw. And again, there was a much easier, safer throw to be made to Dex that had a chance at succeeding. In other words, this is the exact opposite of the kind of throw I'd expect to see make.

Of course, one throw doth not a new quarterback make.

Of course, one throw doth not a new quarterback make. But it's worth noting that when the game was on the line, Alex Smith trusted his arm and made the risky (but correct) play. And that paid off big.

Here's hoping that this play is a preview into Smith gradually learning to trust his arm more and take the occasional risk. Because if he gets to that point, suddenly the phrase "game manager" won't be as accurate a description of the Chiefs quarterback.