The top 5 things wrong with the New York Giants, and more on the KC Chiefs game

The Kansas City Chiefs play the New York Giants at Arrowhead in Week 4 and to get a better handle of where things stand with the 0-3 Giants right now we talked with Ed Valentine over at SB Nation's Giants blog, Big Blue View. Ed tells us the top five things wrong with the Giants right now, who the Chiefs need to keep an eye on and even gives us a score prediction that will make Chiefs fans happy.

Share All sharing options for: The top 5 things wrong with the New York Giants, and more on the KC Chiefs game

Name one player on the Giants defense to keep an eye on.

Well, the best player on the defense is Jason Pierre-Paul, and whether or not he has an impact on the game bears watching. He had offseason back surgery, did not play in the preseason and has been a shell of himself thus far. He's had no impact in the pass rush at all, and if the Giants defense is going to have any positive impact on Sunday's game Pierre-Paul has to begin to find his form.

Name one player on the Giants offense to keep an eye on.

Stop Eli to stop the Giants 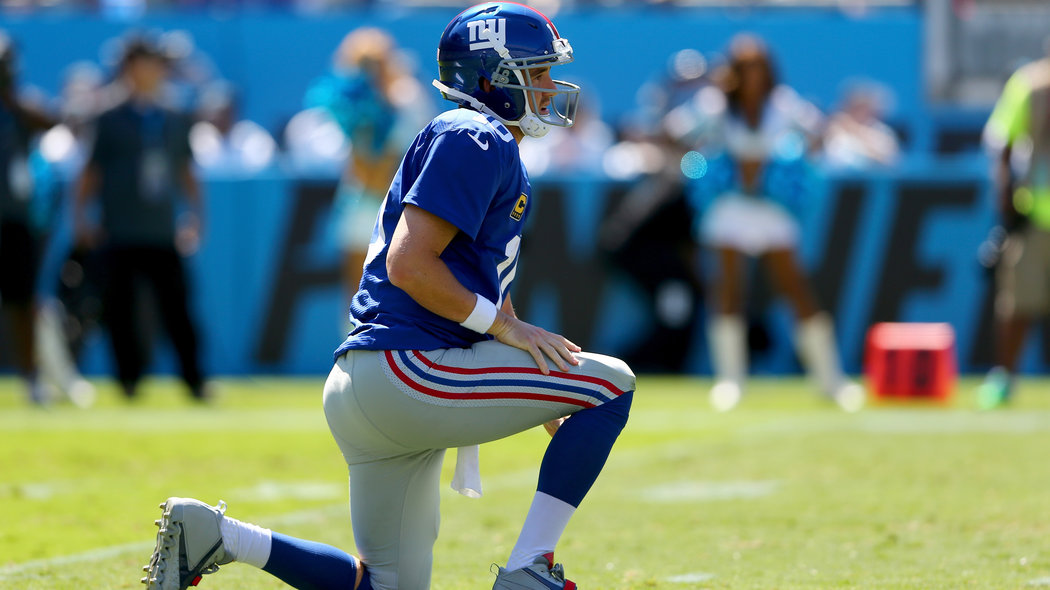 "The Giants offense is centered around the quarterback," Chiefs defensive coordinator Bob Sutton said on Thursday.

I will say Eli Manning, because he is still the most important player the Giants have despite his ugly numbers so far this season. Fact is, no quarterback can succeed under the kind of pressure Manning faced vs. Carolina. Can the Giants run just a little? Can they pass block? They have to do those things because if they give him a chance everybody knows what he can do.

What are the top 5 things wrong with the Giants right now?

Oh man, that's a looooooooooooong list. I will simplify it, though.

What's wrong with the Giants? That's a looooooooooooong list.

That pretty much sums it up. Except, maybe to add that they can't punt, they can't return punts, they are a turnover waiting to happen on offense, they can't get big stops on defense and they seem to be playing with no passion.

After 14 years in the NFC East, what do you remember about Andy Reid? What concerns you this week about facing him?

What I will tell you about Reid is I am not surprised even a little bit that he is doing a great job so far in KC. He's a terrific coach, and I never thought the fans in Philadelphia really appreciated how good he is. His one flaw is that he tends to get pass-happy so the coaches around him have to reign him in sometimes. As for what concerns me, it's simple. Right now, he's coaching a better football team than the one the Giants are bringing to Arrowhead.

Prediction for the game?

Well, I'd love to predict a Giants' victory. I am not going to give you the blindly loyal "homer" prediction, though. The Giants stink right now. They've stunk since the second half of last season, going 3-8 in their last 11 games. Would it stun me if they rose up and played great against KC? No, I've seem them do it before. I can't predict it, though. Chiefs 30, Giants 24.