NFL picks Week 4: Predicting Giants-Chiefs game and everyone else

Facing an 0-3 team is always dangerous if overconfidence is an issue. After going 2-14 last year, it should not be for the Chiefs.

Share All sharing options for: NFL picks Week 4: Predicting Giants-Chiefs game and everyone else

Who would have thought before the season that the Kansas City Chiefs would be 3-0 heading into their Week 4 matchup against the winless New York Giants at Arrowhead Stadium?

Coming off a 2-14 season, the Chiefs have shown the NFL is indeed a place of parity. Kansas City is even getting national love from all the major media outlets, with some starting to wonder if the Chiefs are a legitimate threat in the AFC. I say slow your roll baby, we have plenty of proving left to do.

Still, it is a very exciting time to route for Kansas City, something that has not been said around here in recent seasons. This is not a time to get overconfident though with a reeling team coming into a hostile environment. Bad things happen to those that presume.

Now, onto the Week 4 picks, with all lines provided by Oddsshark.com.

Kansas City has a huge advantage in this game up front. The Giants allowed seven sacks against the Carolina Panthers last week in their 38-0 blowout defeat...in the first half. Previously, the Panthers had three in two games. Overall, Big Blue has given up 11 on the campaign.

None of that news bodes well for New York in a raucous stadium against Dontari Poe, Justin Houston and Tamba Hali. It sounds insane, but there is a real chance Houston has double-digit sacks in September. Dear God. It's tough to see the Giants really running well against the Chiefs either. New York has 133 rushing yards, for the year.

If Kansas City continues to take care of the football and plays well in the kicking game, the Giants will likely have trouble scoring points. The Chiefs are far from an offensive juggernaut, but they are the superior team.

I've never lived in Kansas City, but I feel like a native. I'm so beaten down by history that I fear the undefeated Chiefs will crap the bed this Sunday against the totally defeated Giants.

That being said, reason trumps fear and I'm taking Andy Reid's new-attitude Chiefs to continue playing like they have all season.

Eli will be in trouble, and Alex opens things up a bit.

It's easy to overthink this. Instead of looking at weaknesses vs. strengths, it's easy to fall into emotional responses in this game. The Giants just have to rebound, right? The Chiefs can't start 4-0 after a two win season, right? Yet the numbers tell a different story, one that says the Giants remain winless while the Chiefs stay undefeated after the season's first quarter. From the Chiefs pass rush to the time they've had to rest to the horrible Giants running game, the Chiefs should enjoy another win.

Eli's been bad, Justin Houston eats rookie OT's for breakfast, the Giants' defense isn't good, and Alex Smith is taking care of the ball.  AND it's in Arrowhead.

Three weeks ago I had the Chiefs losing this game. 3-0 changes things. Headed back to Arrowhead, the Chiefs should win this. 23-19, Chiefs.

The pain will flow like the Arrowhead of the days of yore. 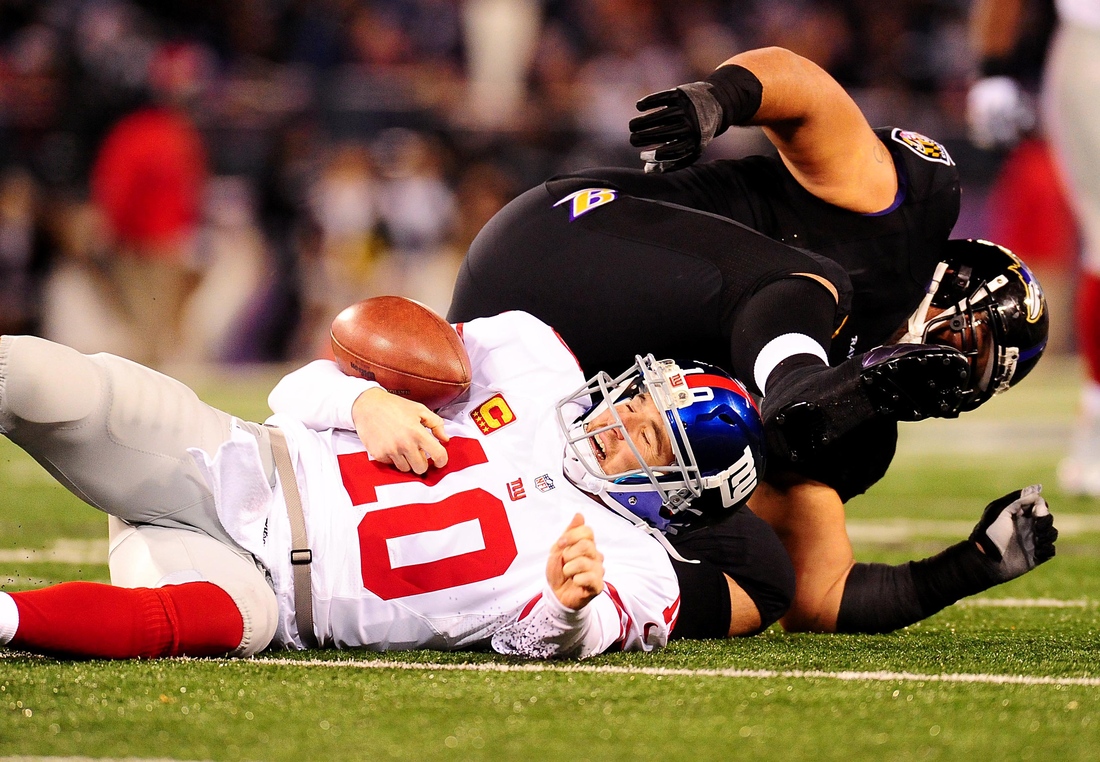 This is a game the 49ers have to win if they are to avoid an unthinkable 1-3 start. Fortunately for San Francisco, the Rams gave up six sacks last week against the Cowboys, showcasing what a sieve the line is. Even without Aldon Smith, the 49ers should be able to harass Sam Bradford throughout the evening.

The Ravens got a tough win without Ray Rice last week over the Texans, while the Bills looked awful in a loss to the Jets, who even took 20 penalties to help their cause. EJ Manuel was brutal, completing only 19 of 42 passes. Baltimore is still a quality team. Buffalo still is not.

Cincinnati is coming off a great win and gets a game against Cleveland as a reward. Division games are never easy, but beating Brian Hoyer is unless you are the Vikings. In the word of Chris Berman; WHAT? The Bengals are too good defensively to get beat here, even on the road in a tough environment.

Normally, this is where I would insert a joke about Josh Freeman. However, I'll take the high road since his play earned him a benching in favor of Mike Glennon. This is a brutal trip for the Cardinals, who have to come across the country again after being waxed by New Orleans next week. Still, Glennon won't win his first start against a tough defense.

The Jaguars are so bad it actually is painful to watch. Indianapolis is likely to have a huge letdown this week after pummeling the 49ers, and will still crush Jacksonville. Can you imagine if the 2013 Jaguars played the 2012 Chiefs? I think I'll go bash my skull into a steel beam until that image goes away.

Every week, Houston leaves us feeling like this. It's impossible to figure out how the Texans can go from juggernaut to flaming crap bag week-to-week. This week? I'm smelling flaming crap bag against the best team in football. Think Houston fans are hoping Nashville will take Gary Kubiak as a 'coach to be named later' in the Titans relocation deal?

This baby screams for a deflating Bears loss. Despite being 3-0, Chicago always seems to make things interesting. Jay Cutler has yet to make a truly back-breaking play, and this week feels right against a somewhat frisky Lions team at home. Could we have a two-way tie for the NFC North lead not involving Green Bay?

Both teams are 0-3 and genuinely horrible. The difference is behind center in this one. Matt Cassel is likely a better person, but he often can't hit the broad side of 10 barns lined up next to each other. Ben Roethlisberger is probably not winning any Man of the Year awards, but he can ball.

I have picked against the Jets three weeks straight and been burned twice. Still, I'm a man of great stubbornness. New York is no good, and Tennessee is a mediocre outfit at home. Plus, this clown does not root for the Titans, so count me in.

This is going to be a game where everybody loses their minds on twitter as Robert Griffin III and Terrelle Pryor combine for 800 total yards of offense. Both of these teams have a severely allergic reaction to defense, making this good TV and bad football. 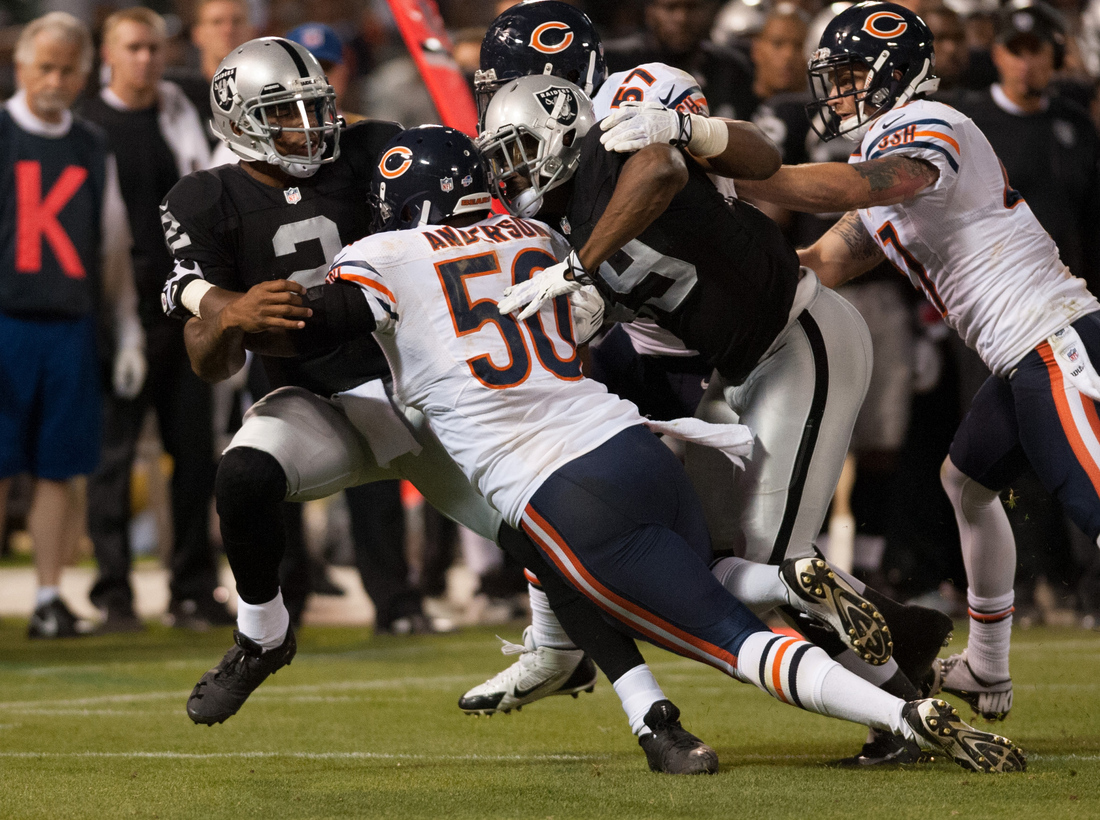 San Diego should be 3-0 and yet is 1-2. Why? Right here. No team knows how to give away a sure win quite like Philip Rivers and the boys. The Chargers won't have to worry about gagging this time around, because Rivers will be busy running for his life. Dallas' front seven will have a field day. 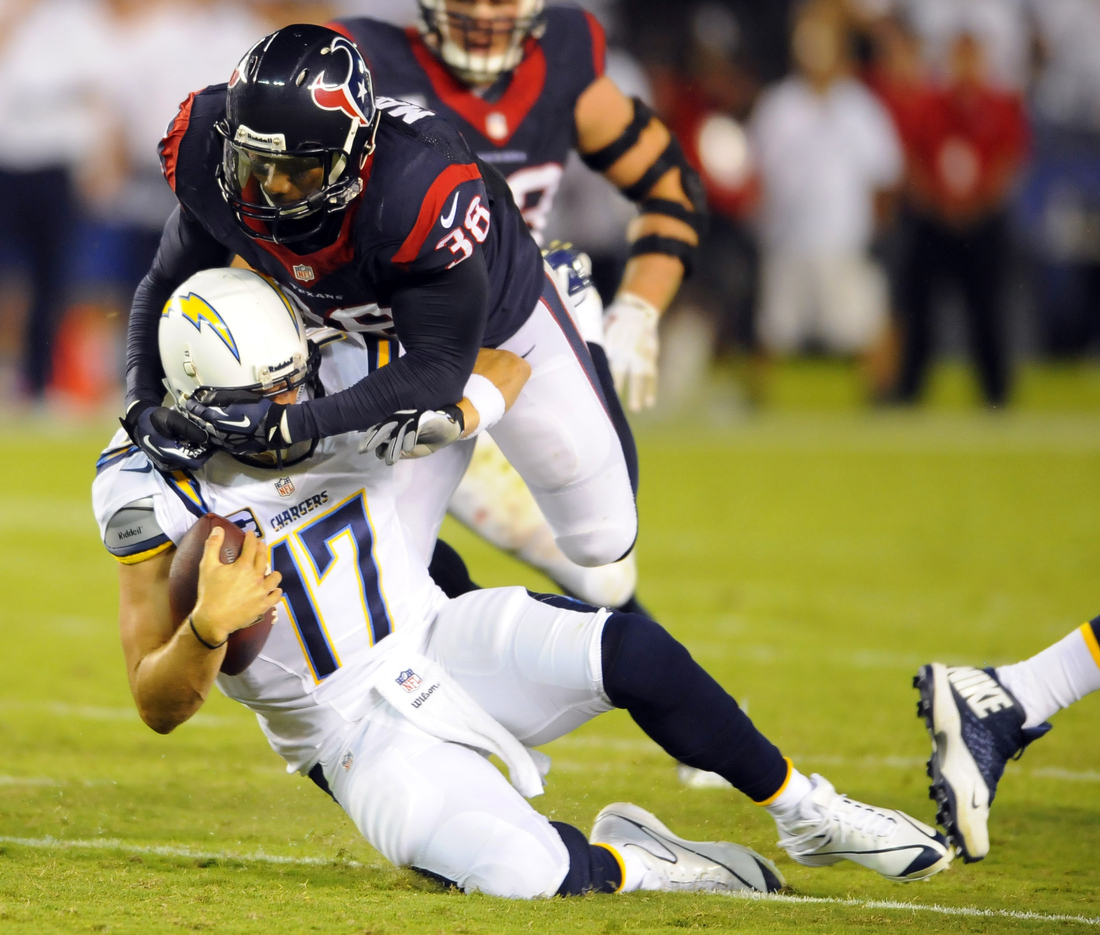 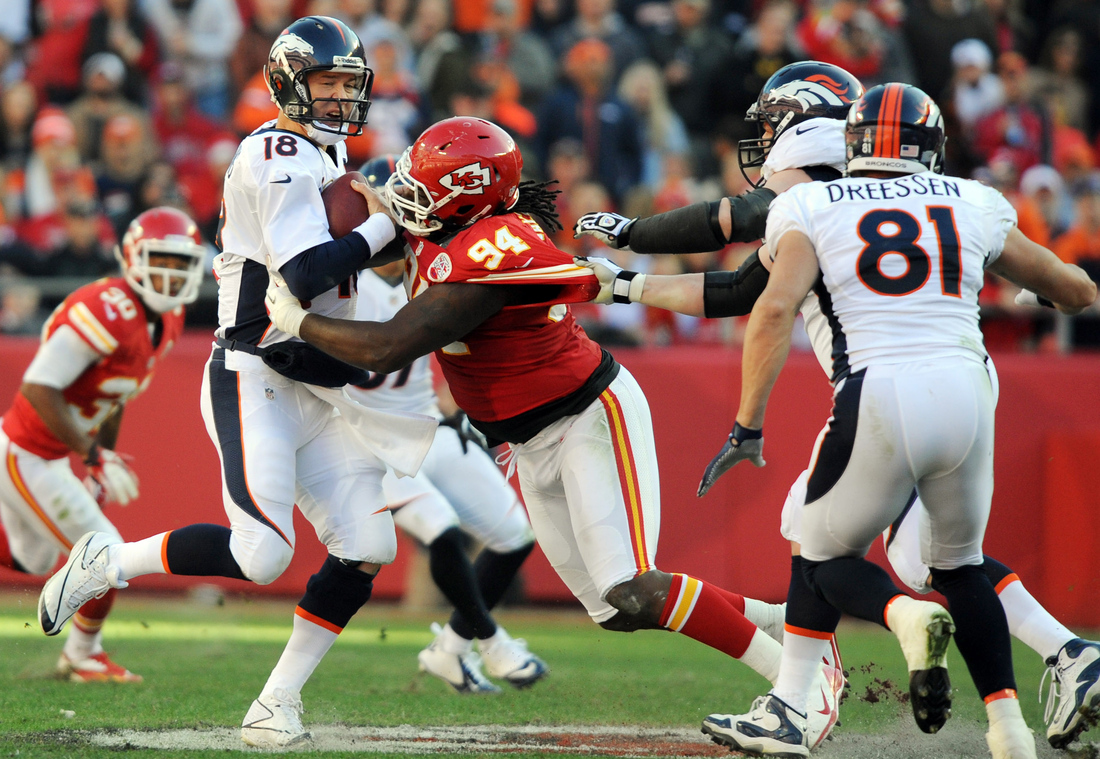 Atlanta is coming off a tough loss and Mike Smith is 21-2 coming off a defeat in his head coaching career. On top of that, New England is eventually going to drop a game while playing such a mediocre brand of football. In the Georgia Dome where Matt Ryan almost never loses is a likely time.

Welcome to Miami's first loss of 2013. Normally, Monday night games are lopsided matchups that have no juice. This time we get a respectable game with two 3-0 teams clashing at the Superdome. Drew Brees always seems to have big games under the bright lights.